In 1963, Sandy van Ginkel, a McGill professor and Montreal urban planner, was tasked with picking a team to design Expo 67 — the iconic, $283 million world’s fair, held mostly on reclaimed land in the St. Lawrence and featuring exhibitions from 120 countries. Van Ginkel, favouring youthful energy over credentials, opted for a crew of 20- and 30-somethings, many fresh out of undergrad.

He approached a 25-year-old former student, Moshe Safdie, to offer him a job and found himself haggling with the young architect. Safdie would accept van Ginkel’s proposal in return for a $10,000 salary (nearly $80,000 in today’s money) and a promise that his McGill thesis project, a radical new proposal for urban living, would be featured at the exposition. 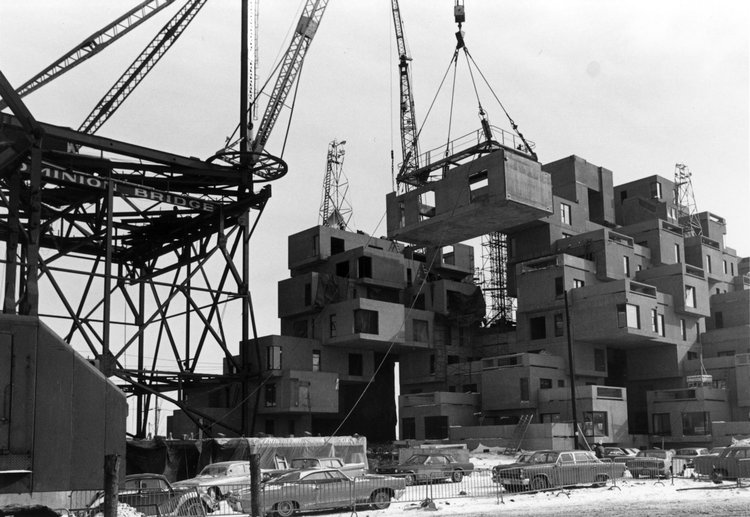 Four years later, the fair welcomed 50 million visitors, who came to see international soccer tournaments, rodeos, operas, and multiscreen movies — and to marvel at Buckminster Fuller’s 76-metre-high geodesic dome and Arthur Erickson’s arboreal pyramid, made of Douglas fir. The biggest attraction, though, was Safdie’s Habitat 67, an apartment complex that, in its sprawling, multipart structure, evoked the bee hives the architect tended as a child in northern Israel.

Habitat, now a condo complex, has since been admired, dismissed, fought over, commemorated on postcards, and immortalized in a Leonard Cohen music video. When it opened, its proponents described it as a milestone, a design intervention that would force us to reconsider how we live together. Its critics dismissed it as an expensive indulgence. Today, as the Expo’s 50th anniversary approaches, Habitat 67 is looking better than ever. The building’s best defender? Safdie himself, who insists that the project was ahead of its time.

In his 20s, Safdie, an Israeli Canadian with an olive complexion and chevron mustache, had the bullish confidence of a much older man. His undergraduate work had already garnered attention — the beloved British architect Jane Drew took one look at his McGill thesis, a precursor to Habitat, and said, “There’s nothing I can tell you”—and he’d sweet talked his way into an internship with Philadelphia-based master Louis Kahn.

Safdie knew how to make friends in high places, shout down opponents, and bludgeon through bureaucratic stonewalls — skills that came in handy during the run-up to Expo. When the event’s organizers hired a Euro-centric master planner from Paris, Safdie and his fellow architects blocked the move by threatening resignation. When an Expo-appointed committee of engineers warned that Habitat was unbuildable, Safdie threatened a libel suit. And when the new federal minister of trade and commerce asked to downsize Habitat as a cost-saving measure, Safdie warned that such alterations would make the building structurally unsound — an argument he later admitted was “half true.”

Safdie made Habitat happen by fighting for it. Nobody believed in the project as strongly as he did. His vision was inflected with 1960s idealism and the utopian socialism of his upbringing, during which he spent summers on various kibbutzim — Israeli agrarian settlements that emphasized communal living. His approach was also a precursor to what we now call “design thinking:” the notion that, by envisioning radical new built forms, architects and planners can make human life happier, healthier, and more harmonious.

With Habitat, he wanted to marry two seemingly irreconcilable typologies: the detached house (a symbol of middle-class autonomy) and the apartment complex (a fact of life in high-density cities). He envisioned prefabricated concrete building blocks piled loosely on top of one another and reinforced with steel cables. The structure would be more like a stacked community than a tower: a sun-dappled maze of set-backs, catwalks, raised boulevards, and elevator banks. The roofs of some units would serve as outdoor spaces for others, allowing for what Safdie called “gardens in the sky.” Habitat was intended as a pilot project. If it succeeded, architects worldwide would emulate its success.

It’s not an exaggeration to say that when it opened to the public in April 1967, Habitat became the most talked about building on the planet. The New York Times and Time magazine raved about it, while The Republic argued that it resembled the set for a horror film. The site’s 7 million visitors included the president of France, the first lady and president of the United States, and the countess of Snowdon. Artists petitioned Safdie to build sculptures on the premises; he turned them down, insisting that Habitat was beautiful enough on its own.

The decade following was less auspicious. The building was at the centre of an ugly custody battle between government stakeholders. A lack of amenities at the site and prohibitively high rents made it difficult for Habitat to attract tenants. (Safdie and his family moved out shortly after Expo.) Encouragingly, Safdie received commissions to design new Habitats in Washington, New York, San Juan, Rochester, Tehran, and Jerusalem. Less encouragingly, all of these projects were kyboshed, often before workers broke ground.

Despite these growing pains, Habitat never lost its hold on the popular imagination. The building’s reputation has grown, in part, because Safdie’s has. He’s now one of the most revered architects, having designed the National Gallery of Canada, with its pyramidal great hall and cathedral-esque colonnade; the Holocaust History Museum, a concrete spine nested into a hillside by Jerusalem’s Ein Kerem Valley; and Kansas City’s Kauffman Centre for the Performing Arts, with its hulking accordion-like body.

“Twenty-five years ago people would ask, ‘Why had Habitat not proliferated?’ I used to answer, “It’s an idea whose time is yet to come.'”

Moreover, concrete architecture, once maligned as a style for dour socialists, is also making a comeback, as designers find ways to draw out the material’s subtle beauty. The Portuguese National Pavilion, designed by Álvaro Siza Vieira for the Expo 98, in Lisbon, is so sinuous and agile it will make you rethink everything you thought you knew about concrete. And several 21st-century buildings — including the Science Hills museum in Komatsu, Japan, and the recent School of Economics and Business at Chile’s Diego Portales University — demonstrate that concrete edifices can be integrated beautifully into grassy surroundings. In the midst of this revival, Habitat has become one of the most fashionable Montreal residences. Some tenants have been there for three generations, others are paying nearly $2 million to get in, and Safdie himself returned in 1972 and now has a pied-a-terre on the 10th floor. Last year, The Guardian included Habitat, alongside the Pyramid of Zoser and the Twin Towers, in “A History of Cities in 50 Buildings.”

The one lingering criticism is that Habitat didn’t live up to its utopian ideals. Writing in The Walrus, architecture critic Adele Weder points out that by reconciling detached-house amenities with apartment-block density, Habitat was supposed to make the good life attainable for low-income urbanites.

A newly renovated interior of one of the building’s condo units, designed by the firm StudioPractice.

Safdie promised “for everyone a garden,” but today the building offers luxury condominiums for the rich. And the Habitat style was supposed to spread throughout the world, rivaling the standard apartment block as the dominant downtown form, but that too never happened. “Habitat as a great social experiment — community building through architecture — can go only so far in a market economy,” writes Weder.

She’s not wrong, but it feels like she’s grading Habitat on a pass-fail basis. Perhaps Safdie’s biggest sin is expecting too much from his project. True, it didn’t usher in a new era of utopian living, but how many buildings do that?

Today, Safdie argues that when measuring the success of a residential site, we should ask one question before anything else: Do people like it there? “One criticism of Habitat that’s never been made is that it’s an undesirable place to live in,” he says over the phone from his office in Somerville, Massachusetts. “Everybody has always said that it’s an unbelievable place to live in.” 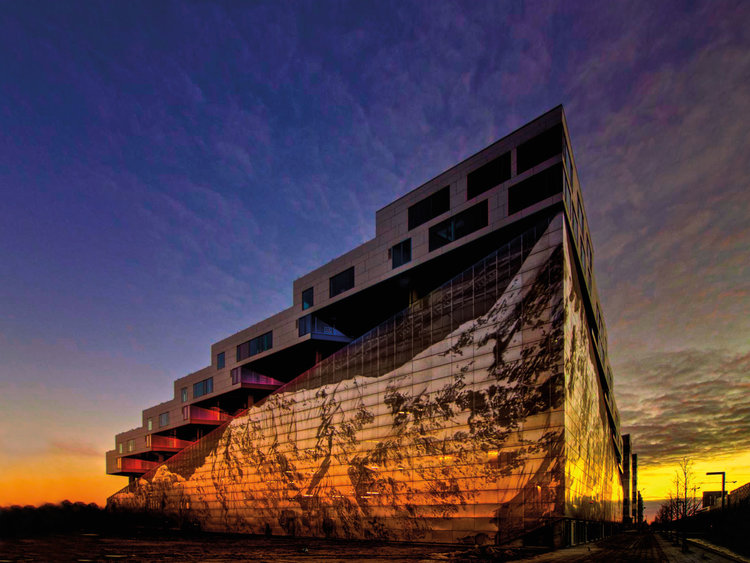 While Habitat didn’t sweep across the globe rendering traditional apartment complexes obsolete, the project has indeed changed how we think about architecture, albeit in subtle ways. Safdie argues that Habitat’s most immediate descendants are the hillside resorts that sprung up in Turkey, the Mediterranean, and Central America. He mentions the Las Brisas Ixtapa, in Guerrero, Mexico, a slanted structure resembling stadium risers that climbs a leafy escarpment, bathing every unit in natural light.

Today, downtown architects are finally learning to speak the language of Habitat. “Twenty-five years ago, when people would ask me, ‘Why has Habitat not proliferated?’ I used to answer, ‘It’s an idea whose time is yet to come,’” says Safdie. “But now, it’s almost the 50th birthday, and we are witnessing an extraordinary resurgence of interest in the project.” In 2010, Safdie launched Beyond Habitat, a fellowship program in which participants created new Habitat-inspired designs. Two of these projects — in Singapore and Qinhuangdao — have now been built, and a third is underway in Sri Lanka.

For all of its complexity, Habitat turned on a single conceit: that you could break up the massing of a building, allowing light to filter from top to bottom and enabling trees to grow far above street level. That idea seems less radical now than ever before, as residential developers incorporate winter gardens and green roofs in order to offset cooling costs and reduce carbon emissions. “I was doing green architecture since before the name was invented,” Safdie says.

Plus, as urban centres become increasingly trendy places to live, and as density approaches a breaking point, there’s a new interest in high-rise design that looks and feels good. Thirty years ago, the big name architects — the Frank Gehrys and Norman Fosters — weren’t getting much money for multi-family residential sites. Now, with increased demand, every major designer is getting in on the high-rise game, and many are embracing Safdie’s notion of the broken-up building. Herzog and de Meuron, the Swiss firm responsible for London’s Tate Modern and the Beijing National Stadium, is now creating 56 Leonard, a New York skyscraper with cantilevered units that reach, branch-like, from the main body. Bjarke Ingels, probably the most talked about architect of 2016, has been riffing on the sky-garden theme for at least a decade. His Mountain Dwelling, in Copenhagen, slopes gently along an artificial incline, under which lies a parking complex. The rooftops are blanketed in foliage: it’s high-concept architecture that mimics a hillside hamlet.

A rendering of Bjarke Ingels’s Habitat 2.0, slated to be built on Toronto’s King West.

Ingels was recently commissioned to create a new complex — an array of peaks and valleys made out of building-block units — on Toronto’s King West. Its main nodes will be five ziggurat-like clusters, reaching as high as 17 storeys. At other points the structure will drop nearly to ground level. Plants and sunlight will be everywhere, making the site less like an apartment building and more like a downtown village. Ingels told me, via email, that he wants to infuse “urban life with greenery usually reserved for the suburbs.” He isn’t even trying to hide his influences. His nickname for the project is Habitat 2.0.

This has got to be one of the wildest interviews I’ve ever read.

Dublin Hotel Sends Out Fake Bill To Blogger For Exposure

Why Canada's Real Estate Market Is Becoming Too Big to Fail

Which Cities Actually Are the Next Brooklyn?

Am I Going to Regret Having Kids?