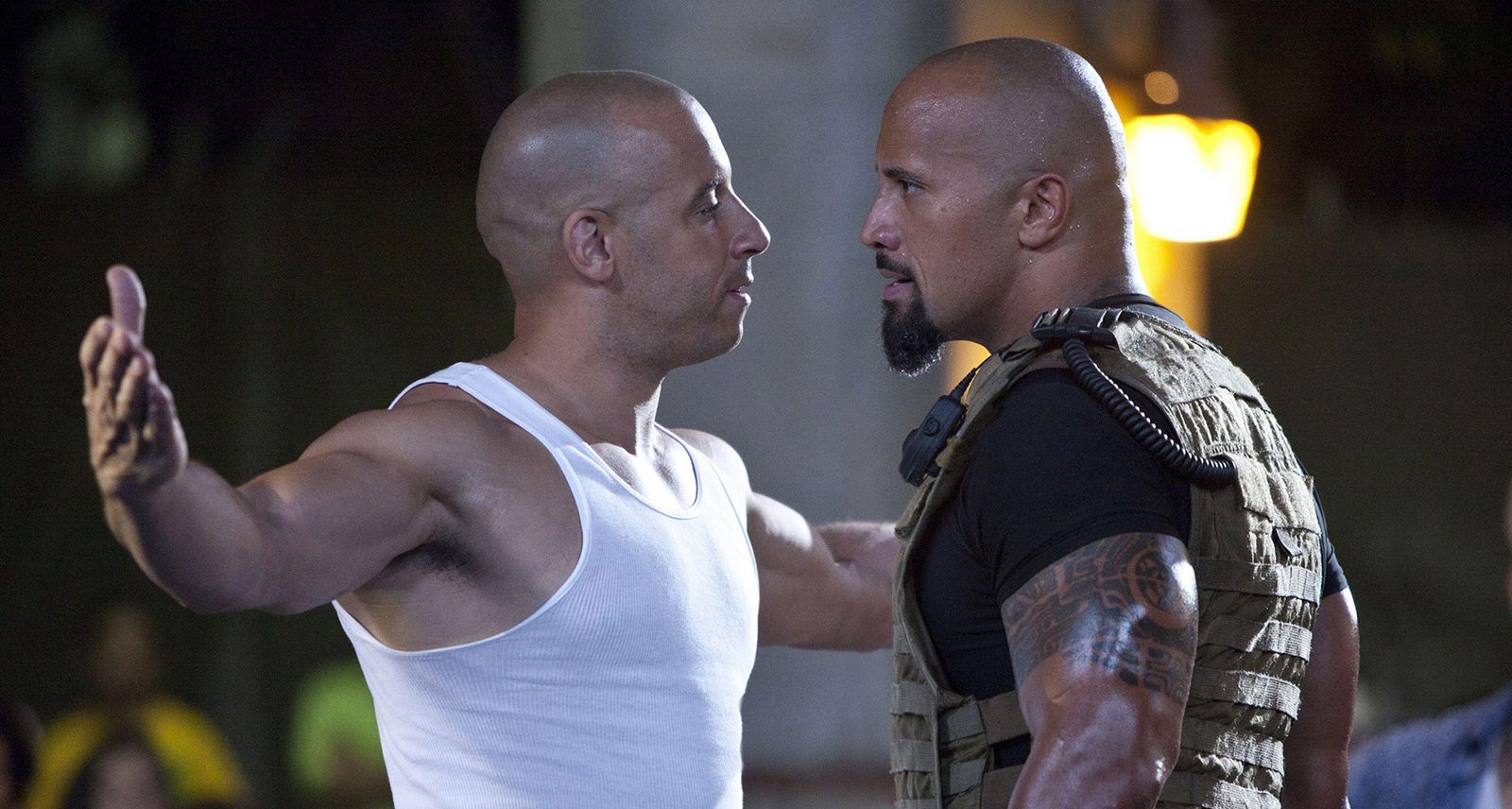 Maybe you remember following along with the Great Dwayne Johnson/Vin Diesel Feud of 2016, or maybe you had better things to do with your life than rubberneck at the sight of two beefy A-listers sniping at each other over Instagram. (In which case, good for you.) Still, either way: I’m assuming you’re aware that there’s a new Fast & Furious movie coming out this week. And that you also know that it’s starring Dwayne Johnson’s Luke Hobbs and his new best frenemy, Jason Statham’s Deckard Shaw. And not Vin Diesel’s Dominic Toretto or the rest of his extended – all together now – family.

Now, technically, this is just a spinoff, as the Fast & Furious series morphs into an extended, Marvel-style Cinematic Universe. But with Hobbs & Shawlooking every bit like a de facto Fast & Furious 9 (or, at the very least, 8.5), right down to its non-stop barrage of gravity- and logic-defying vehicular stunts, it’s time to at least entertain the possibility that Johnson’s taken over as the new face of this franchise.

So, we’ve decided to take a look back through the receipts – all the news stories, awkward red carpet interviews, and passive-aggressive Instagram posts – in order to figure out exactly how, and when, Johnson effectively stepped in as this franchise’s new alpha, even though he only joined the “family” in Fast Five. That’s right: it’s time to reheat some leftover beef!

OK, so yes, after the first Fast and the Furious helped transform Vin Diesel into an actual, honest-to-God movie star, and not just some bald dude with a ridiculous stage name, Vin declined to show up for the sequel, citing concerns with the script. (Which, same.) But, following two lackluster Diesel-less outings, one thing became extremely clear: this franchise just didn’t work without Vin. Led by Diesel – now on the payroll as a producer – the first family of illegal street racing heists all agreed to return for a pseudo-reboot that promised to refresh the franchise. Producer Vin’s first order of business? Convincing Paul Walker to come back into the fold. Or in other words, without Diesel, this series likely would’ve stalled out at #3 and that would’ve been that.

Looking to inject some fresh blood into the franchise, and, on the recommendation of – I shit you not – some randoms on Facebook, Diesel hired Johnson, then just another retired-wrestler-turned-wannabe-action-hero, to play the Fast Five heavy, a badass federal agent tasked with bringing Dom and his team down. And that’s when Producer Vin made his first crucial mistake: never hire a guy who makes your scenes together look like the living embodiment of the You Vs. The Guy She Told You Not to Worry About meme.

Our first inkling there might be a future beef a-brewing came relatively early on, when a mid-movie fight between Johnson and Diesel’s characters reportedly had to be painstakingly choreographed to ensure that – even though Johnson has a good 6 inches on Vin – their two characters were evenly matched sparring partners. (And just so everyone knows, Dom totally could’ve killed Hobbs with that wrench if it wasn’t for his sister.)

And so did the reviews, which – besides reveling in the gleeful insanity of a franchise about street racing suddenly morphing into a movie about automotive super-soldiers – universally credited Johnson for re-igniting the dying franchise. Somewhere Vin is presumably brooding over a copy of Variety and a six-pack of Corona.

Thanks to those rave reviews, it was a no-brainer to get Johnson back for a sequel. Only this time – twist! – Hobbs and Dom now find themselves on the same team. Still, the movie makes it abundantly clear that it’s Hobbs who needs Dom’s help here, not the other way around, OK? Verdict: Still Vin’s franchise, but it’s getting murkier.

While hosting SNL for the fourth time, Johnson delivers an entire monologue about his newfound status as “Franchise Viagra,” taking credit for single-handedly reviving the Fast franchise (among others). Shots fired!

Following Paul Walker’s tragic death during filming, Hobbs has now become a confirmed member of the extended Toretto family – even earning a hospital visit from Dom after getting blown out of a second-story window. In hindsight, maybe confining Johnson’s character to a hospital bed for the better part of the movie can be seen as a pre-emptive power play on Vin’s part. But then again, Johnson also gets to flex out of his cast before riding in as the cavalry, so. Yeah. Advantage: Johnson. During a press conference for San Andreas, Johnson’s asked if he’s planning to return to the franchise for the inevitable Furious 8. His answer? “Of course. It can’t go on without Hobbs.” I mean, he’s not wrong. But still.

And there’s only one name that keeps popping up… Tyrese. Just kidding. It’s obviously The Rock.

The first real indication that maybe the Fast & Furious family wasn’t as tight as they seemed onscreen came from a since-deleted Instagram post by Johnson, where he called out some of his male co-stars as an unprofessional “candy asses,” touching off some appropriately fast and furious speculation. Did he mean Statham? Tyrese? Scott Eastwood? …Ludacris? It didn’t take long to get the answer: it was Vin, with the two reportedly beefing over who got to be the franchise alpha.

“Sources close to the production” – AKA Johnson and Diesel’s publicists – spend the rest of the week leaking stories to the press. People hears that the feud stems from The Rock showing up late to set, or not at all. Page Six pins it on Diesel, saying he’s the one acting “like a diva.” Johnson attempts to claim the high ground first, with an Instagram post about respect, the value of differences of opinion, and, of course, family. Diesel, meanwhile, weighs in with an Instagram video of his own, about what’s really important in life. Spoiler alert: it’s family.

A week before The Fate and the Furious is set to come out, Diesel offers an olive branch via a USA Today interview calling Johnson family (of course), while simultaneously reminding The Rock of his place by calling himself Dwayne’s “big brother in this film world.” The subtext is clear enough to drive an American muscle car through: this is still Vin’s franchise, and he’s going to do whatever it takes to make sure it stays that way. And, in a plot that mirrored real life closely enough to lead some to assume the entire Rock/Diesel beef was some kind of meta publicity stunt, this time it was Dom making the heel turn – leading Hobbs and the rest of the family to team up against their former leader. Meanwhile, on the red carpet, everyone remained on their best behaviour. “We still love each other,” Vin promised Entertainment Tonight.

FALL 2017: THE SPINOFF RUMOURS GET EVEN LOUDER

Fresh off another hit sequel, and with Dom and his crew seemingly having nowhere left to go (other than space), chatter about a solo Hobbs movie starts picking up speed. Leaving Tyrese to jump in with a series of Instagram posts of his own begging Johnson not to go solo.

In order to accommodate – yup, you guessed it – the now-officially announced Hobbs & Shaw spinoff. And Tyrese was – you guessed it – not happy. But when the dust settles, it’s official: Johnson gets to headline his very own Fast & Furious movie. While Vin sits on the sidelines.

Calling Johnson a “clown” and announcing on Instagram that if The Rock is in Fast 9, he won’t be. No one appears to take any issue with that arrangement. Sorry Tyrese.

Asked about the Diesel feud (and its own subsequent Tyrese spinoff) on Watch What Happens Live, Johnson delivered a blow more crushing than any he ever administered in the ring: “That whole thing with Tyrese was pretty disappointing. A beef requires two people to actually jump in it and it was really one-sided.” Oof.

It’s announced that John Cena will officially be part of the cast for Fast & Furious 9. And Johnson will… not. (Advantage: Tyrese.) But at this point, it might already be too late. Because… With Johnson on board as a producer, leaving Dom and his crew behind allows The Rock and Fast franchise writer/de facto architect Chris Morgan to lean even further into the globe-trotting, Rock-headlined action franchise this series has slowly evolved into – hell, it takes a good half-hour before we even get to the movie’s first car chase. Still, Hobbs & Shaw is very much a Fast & Furious movie at heart, right down to the improbable car-fu, well-timed NOS bursts, and sunset heart-to-hearts over a beer.

Johnson even manages to co-opt Vin’s whole family thing by introducing Hobbs’ very own appropriately-badass Samoan clan – not to mention an extremely Mia-and-Brian-esque “Will they or won’t they” with Shaw’s younger sister (Vanessa Kirby). Because, see, 18 years later, this franchise is still all about family. Just not Vin’s anymore.