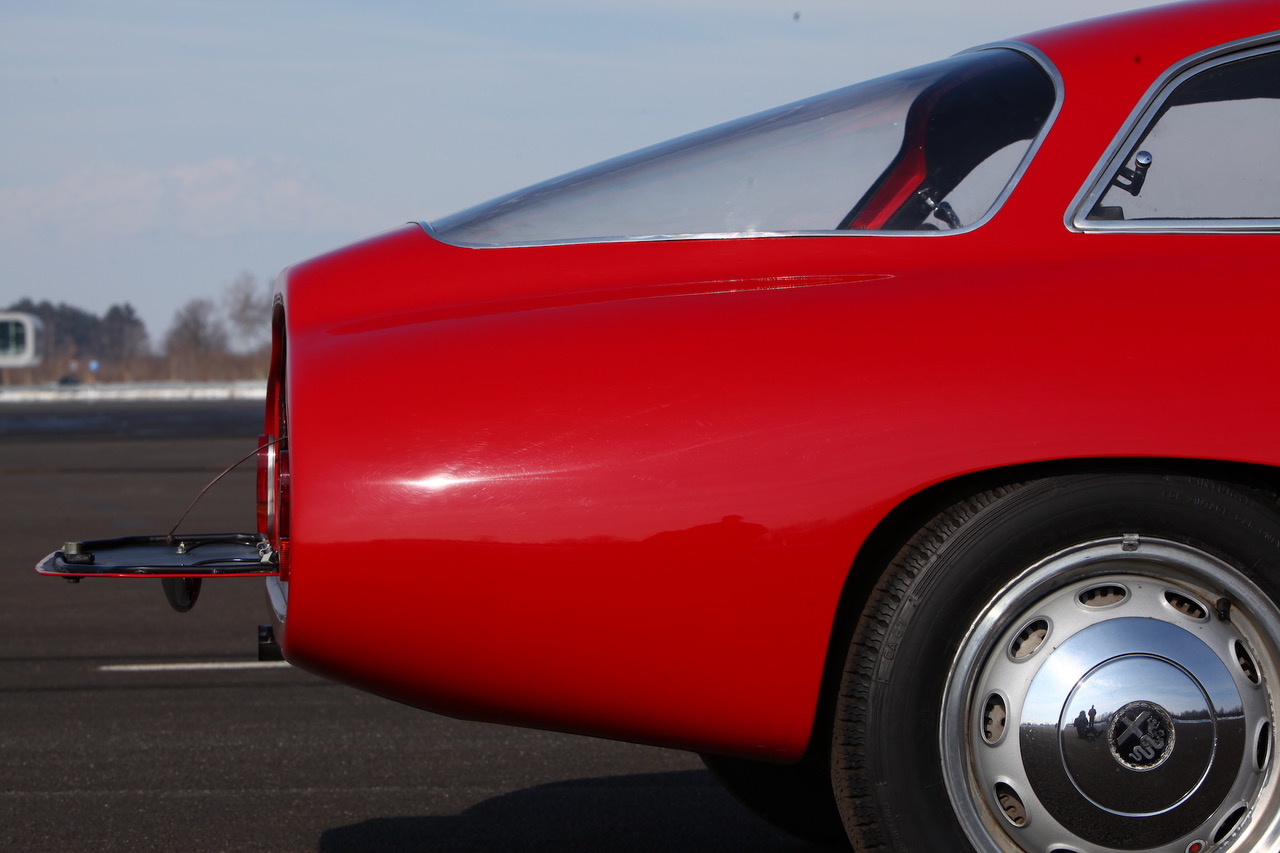 The Ovidian notion of "aurea aetas", the Golden Age, is alive and well in the automotive world. We always yearn for something long gone, and fail to appreciate what we have here and now. But that's normal. I assume that the cavemen who painted the walls of the Altamira grottos were ostracized by their contemporaries for failing to comply with the custom of leaving the walls unadorned. Whatever each of us thinks, there really are some things in each golden age which are never again repeated, and that is a fact 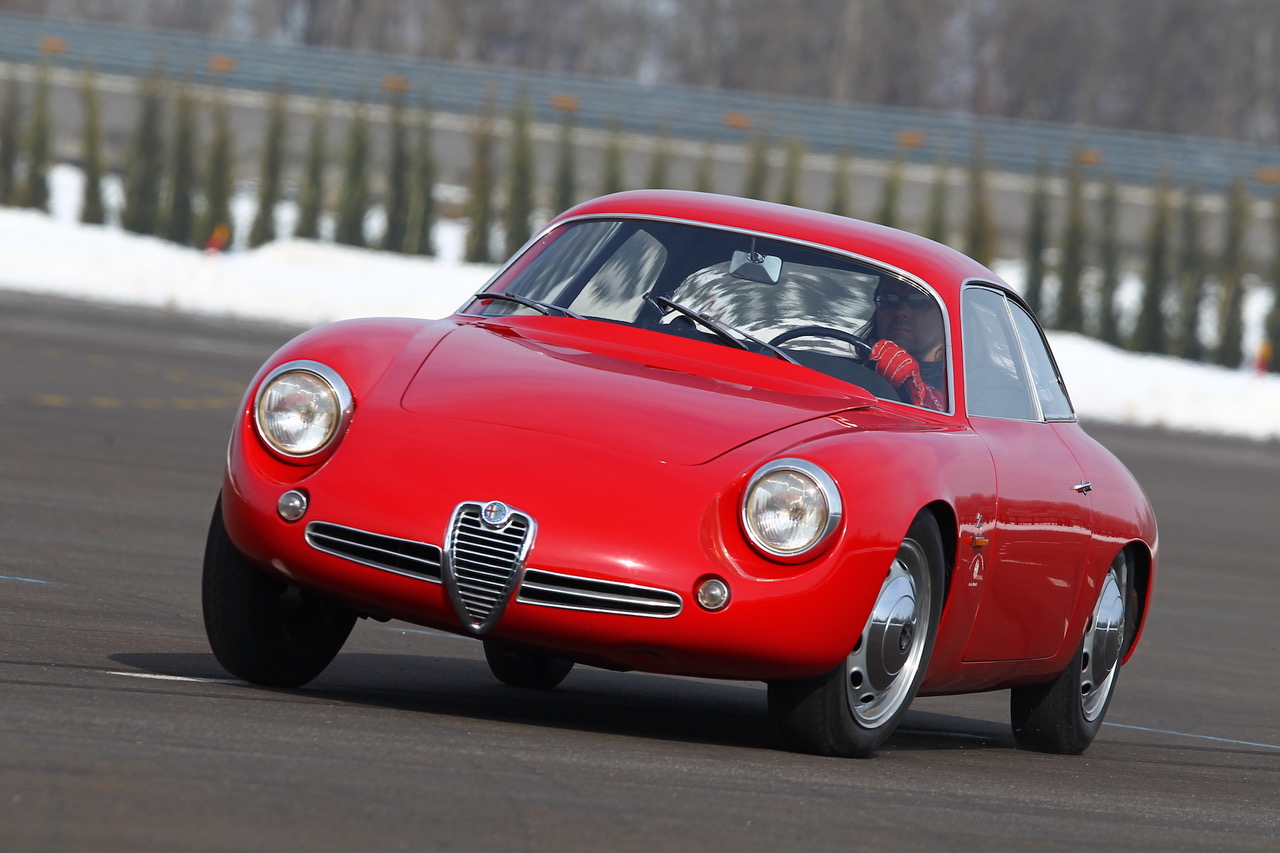 To many people, the golden era of the car world was the 1950's and the 1960's, "when sex was safe, and racing dangerous". The world was shuffling off the post-war poverty and everybody wanted to finally enjoy life. La Dolce Vita, whatever the local language in the Free World, seemed to be the preferred outlook. At that time the recipe for success in motorsport, except in the rarified atmosphere of Grand Prix racing, was fairly simple: a sleek aluminum body formed by hand, an engine full of character, and some sort of suspension working hard to keep all four wheels pressed to the road surface. 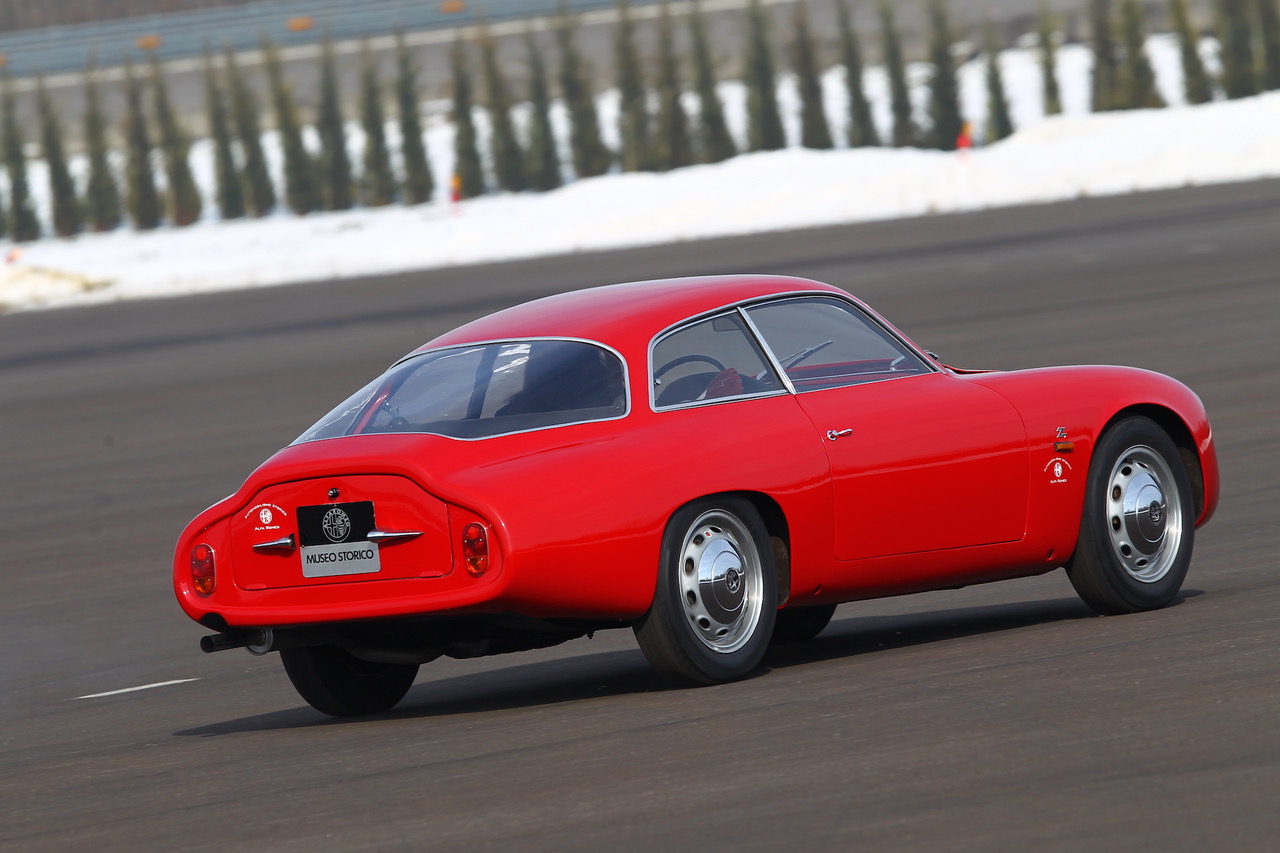 Well, it seems unlikely that we can ever go back to that era, unless we count the various "continuations" which recreate famous cars that can be driven hard with impunity and no fear of forsaking a bluechip investment vehicle. We can never go back, all the more reason for me to soak up the beauty of the red, sensuous sculpture in front of me, bathed in Italian winter sunshine. It has the fragile appeal of a butterfly which is born only to drink sweet juices from flowers, multiply, and die. Everything made in Italy looks different, cars, airplanes, cutlery, furniture, everything. During WWII even Italian submarines looked better than German U-boats. Italians can design a coffee grinder so attractive that you immediately want to drive it. 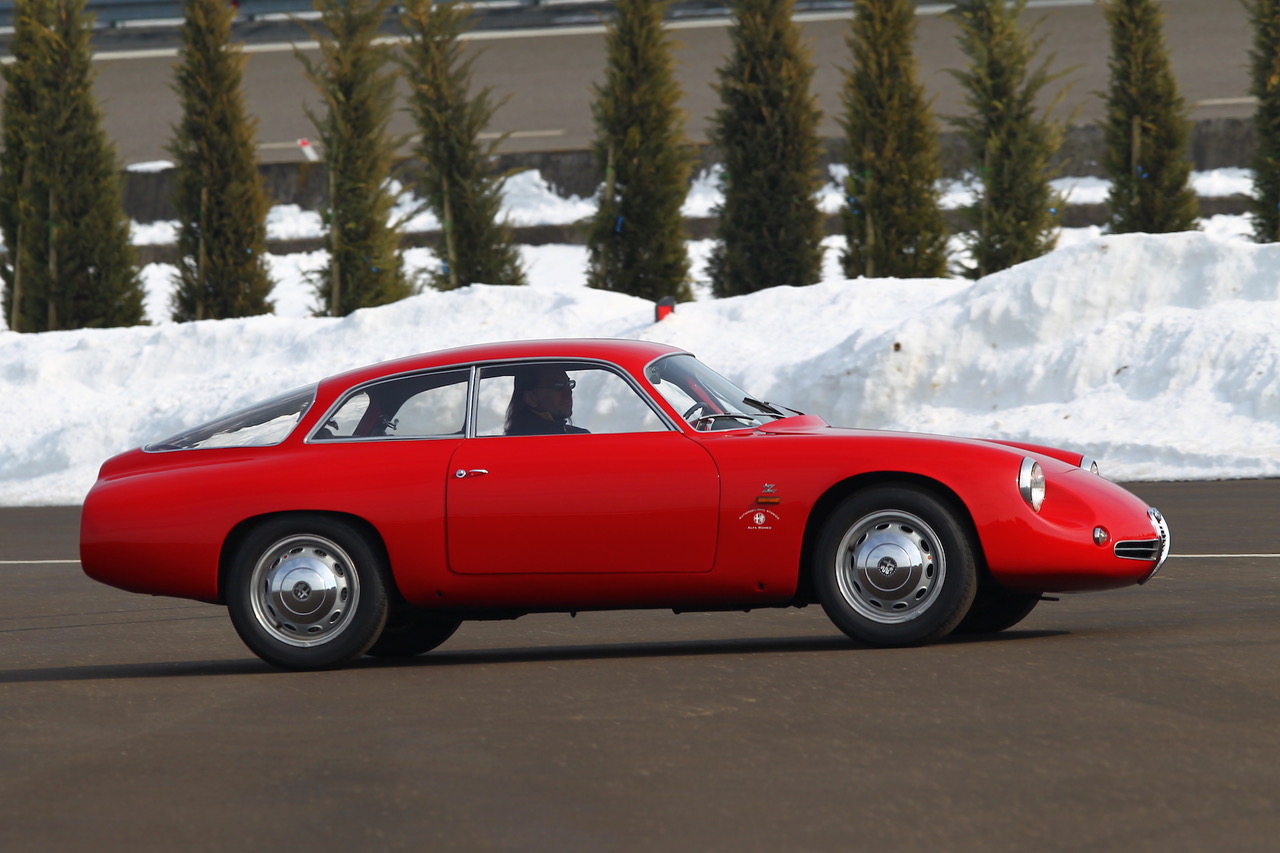 A young child could easily wash the roof and polish it, so low it finds itself in relation to the ground: exactly 125 centimeters. This Giulietta SZ Zagato, built in 1961 as part of the second production run, is a baby Gran Turismo. The proportions look familiar to any fan of coupe-bodied Ferraris and Maseratis of the same, but without their suggestion of girth. The whole Sprint Zagato thing started when Zagato set out to rebody a crashed Giulietta Sprint Veloce (in 1956, on the Mille Miglia, driven by Dore Leto di Priolo), normal practice at the time, and the finished article ended up 120 kilos lighter than the original car, and noticeably faster. 18 cars were built, called SVZ, and proved very competitive. Subsequently the Alfa Romeo bosses, who at first didn't like it because it could outrun their own steel-bodied SS, decided to capitalize on this, and ordered Elio Zagato et consortes to design a coupe for production at the Zagato factory. Convoluted, but that's Italy. 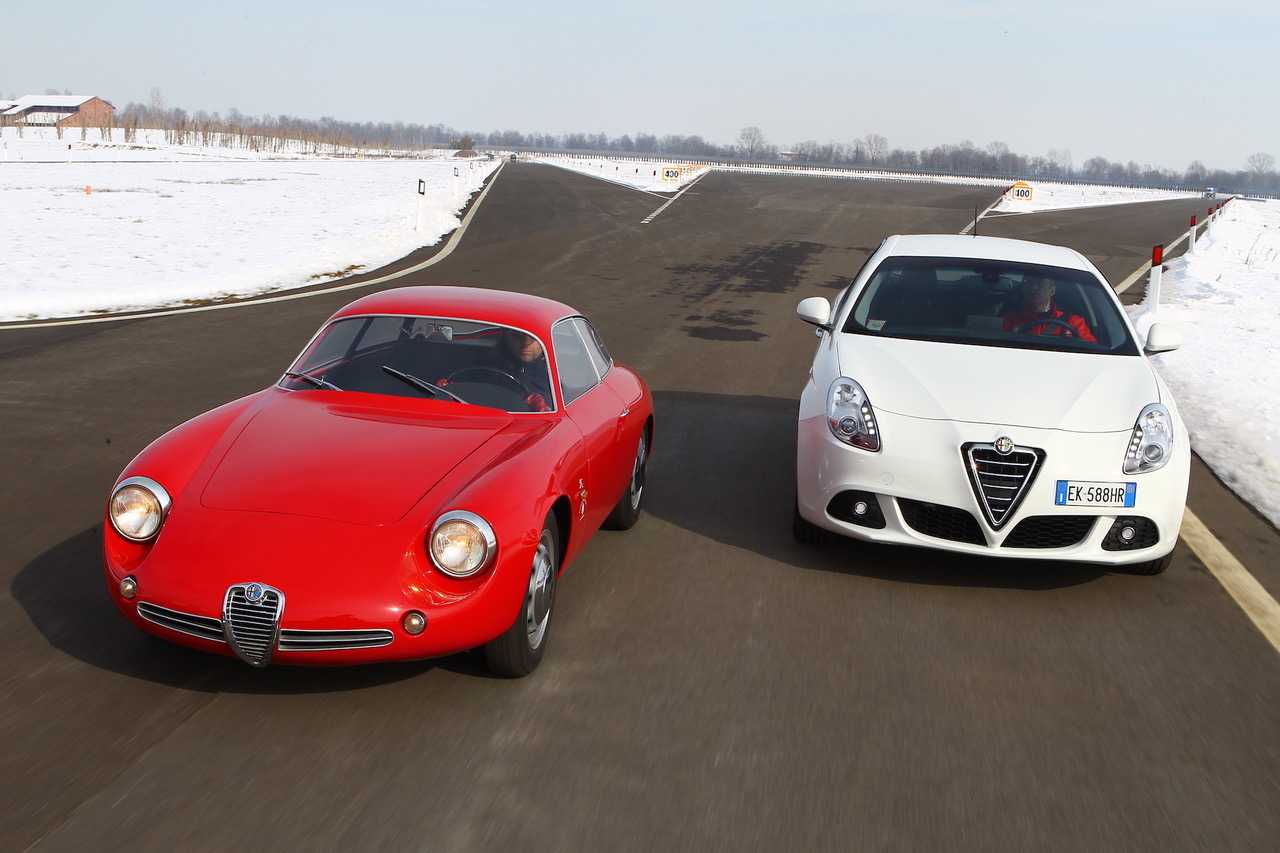 The first generation of the diminutive coupe was presented officially in early 1960, with a stubby, rounded tail (Coda Tonda). Over 200 units were built, and later a new body was developed, with a longer tail designed according to the discoveries of Wunibald Kamm, heavier, but with more top speed due to the lower drag. The Kamm-tail SZ with a panoramic rear window was called "Coda Tronca", and, typically, the exact number of cars built remains a mystery, historians usually quote between 30 and almost 50, but since some of the Series One cars were later rebodied, nobody really knows for certain. The lightweight car was built entirely of aluminum with Plexiglas windows, using the mechanicals of the Sprint Speciale. It weighed in at only 840 kilograms including the spare wheel and a set of tools, compulsory as per the race regulations then. A fat driver would definitely spoil the fabulous power-to-weight ratio, therefore discretion was called for while ladling pasta with a heavy Alfredo sauce onto a plate during lunch. Standing next to the butterfly-weight Alfa I can't help feeling clumsy and overweight. 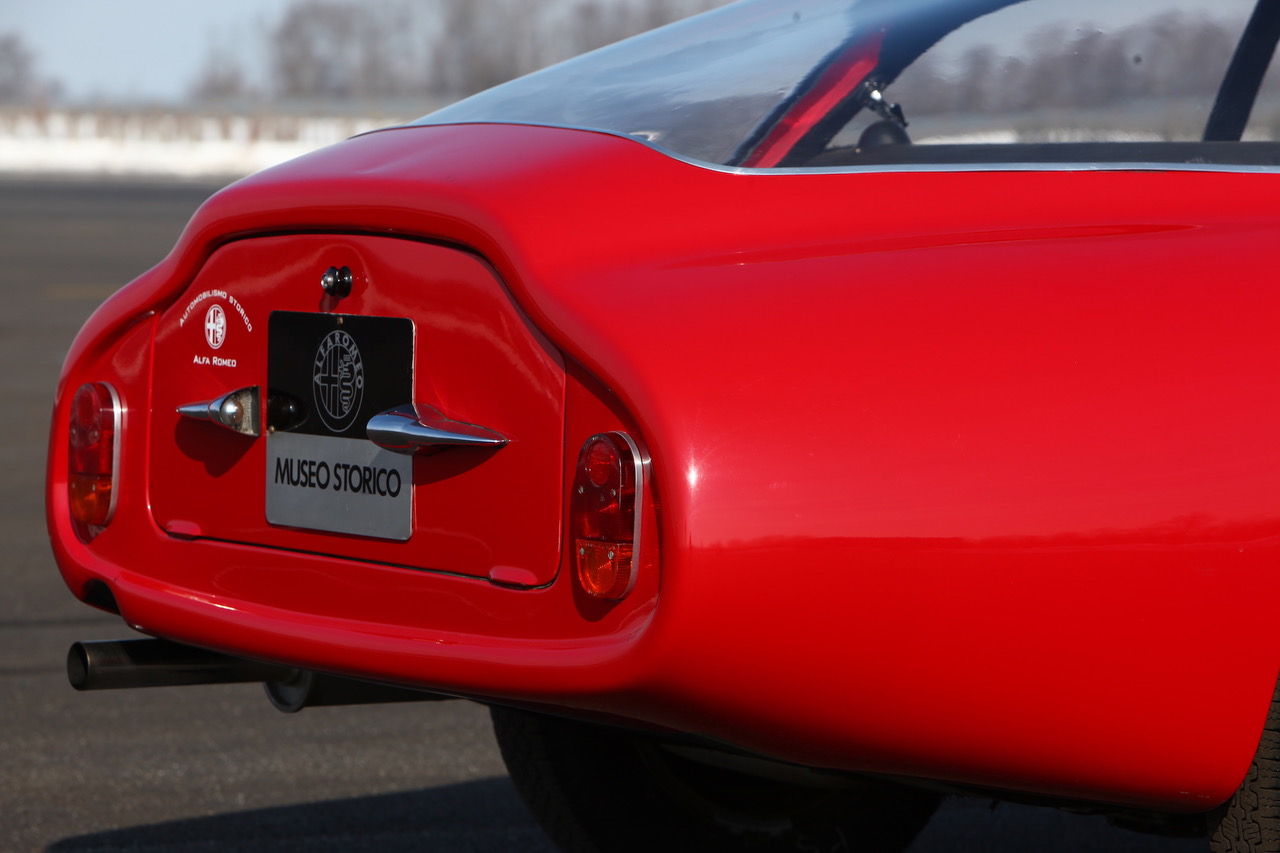 The shape of the hood, or engine compartment lid, is unbelievably voluptuous. The seductively curled lip which keeps the windshield wipers in its aerodynamic shadow is one of the best instances of shaped metal I have ever seen on a car, Italian haute couture. Simply stunning. Perhaps it's just me, but I stare at it for a good minute before I decide to raise the hood. The engine is the familiar 1290cc Giulietta unit with twin overhead camshafts driven by chains, with an aluminum block and cast iron sleeves, developing around 100 horsepower, driving the rear wheels via a 5-speed gearbox (when most fast cars had a 4-speed, and family cars just three). It has independent suspension in the front, and a live axle in the rear located with two trailing arms and an additional arm connecting the body and the differential housing. This late example is equipped with disc brakes in the front and drums in the rear, and the steering is by recirculating ball. And that's about it, as there is absolutely nothing on this car that is not dictated by the rules or by the necessity of making it go faster. 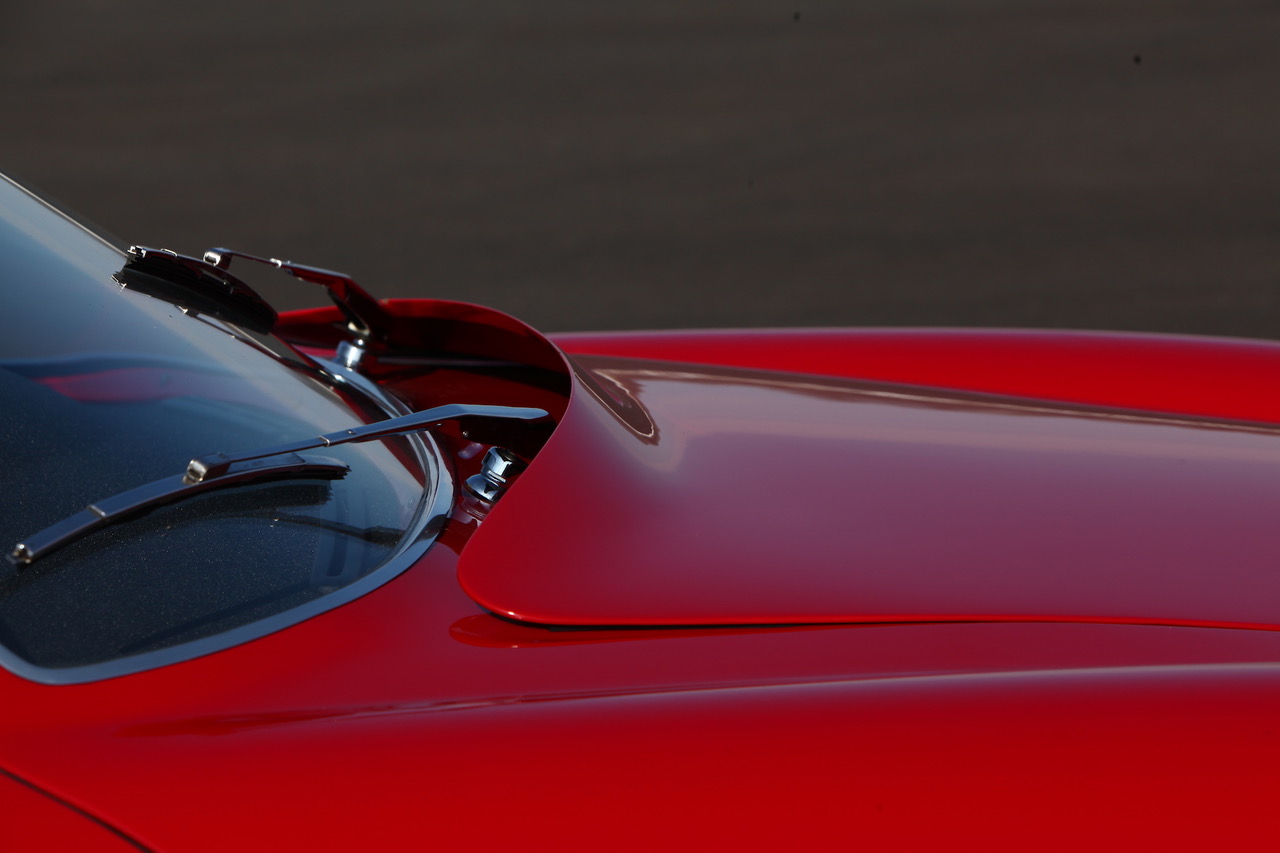 So how does it go? Like stink. Really. The SZ slices the air in the same way that a fat Italian chef slices ripe, juicy tomatoes. Decisively. I am sure it is not in line with the latest norms on pedestrian protection, with that pointed snout, but obviously in the Sixties designers thought that if pedestrians wished to avoid death, they should refrain from walking in front of moving cars. The little red beast can reach almost 200 kph, but it's by far more exciting to know how it gets there. Let's start with getting in it. As you can imagine, it's pretty snug in the cockpit. Good that I have lost some weight recently or it would have been a one way trip. The first thing I notice is the view in the dainty rearview mirror: the convex rear window distorts everything to a ridiculous degree. Imagine being completely drunk, staggering home, and unable to see clearly: that is how it looks. And I love it. It shows a complete disdain for anyone the Zagato rocket has left behind. 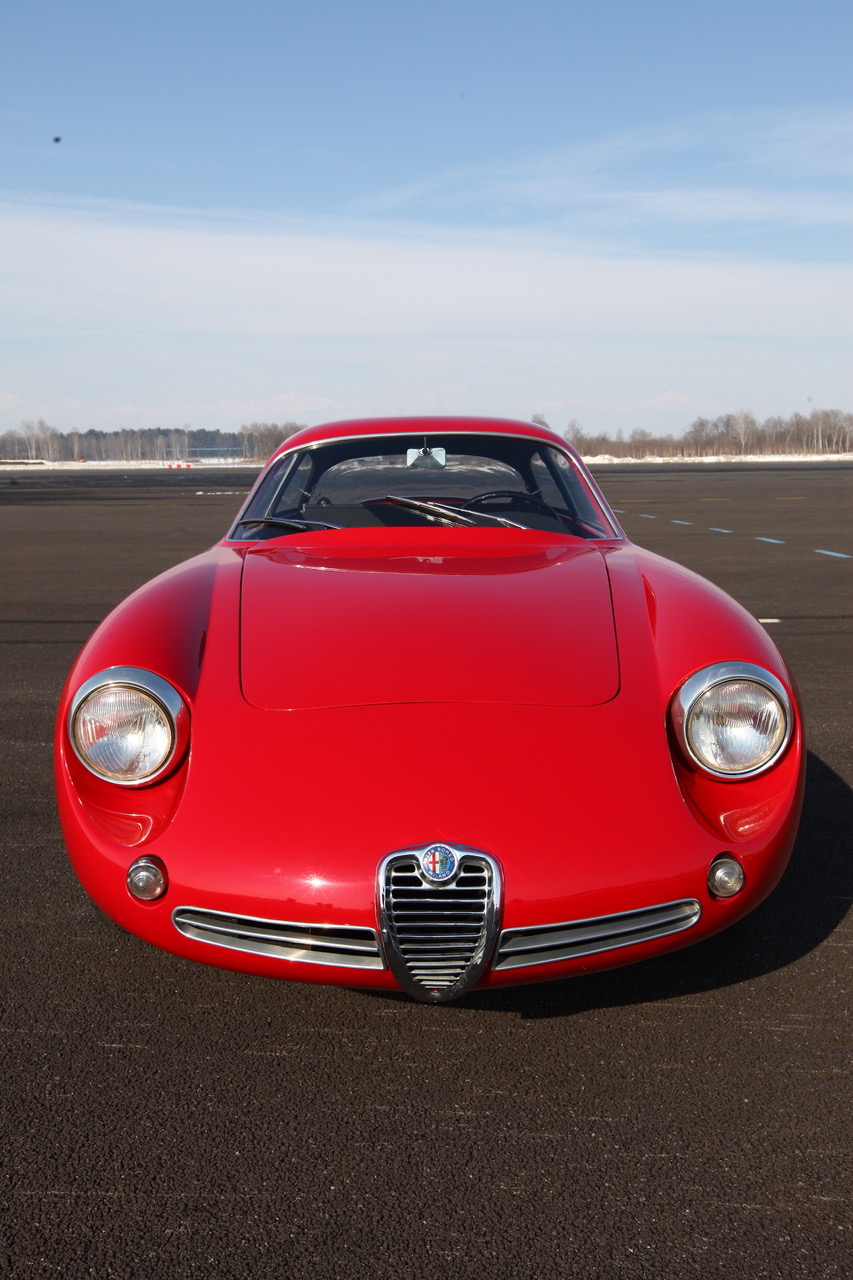 The engine has been prewarmed for me by a Museo Alfa Romeo mechanic, and it starts easily with a metallic twang. It reacts instantly to every twitch of my right foot, with the twin Webers perfectly in tune. Easing the pressure on the clutch I move off, noting the lack of grunt low down, with a lot of smoothness and tractability compensating for it. Once on the move, the steering lightens and starts to load up nicely in turns. The engine loves to rev, but the gearchanges in the 5-speed box cannot be rushed: a heart-wrenching crunch is the result. My face turns red and I learn to guide the thin lever with more patience. 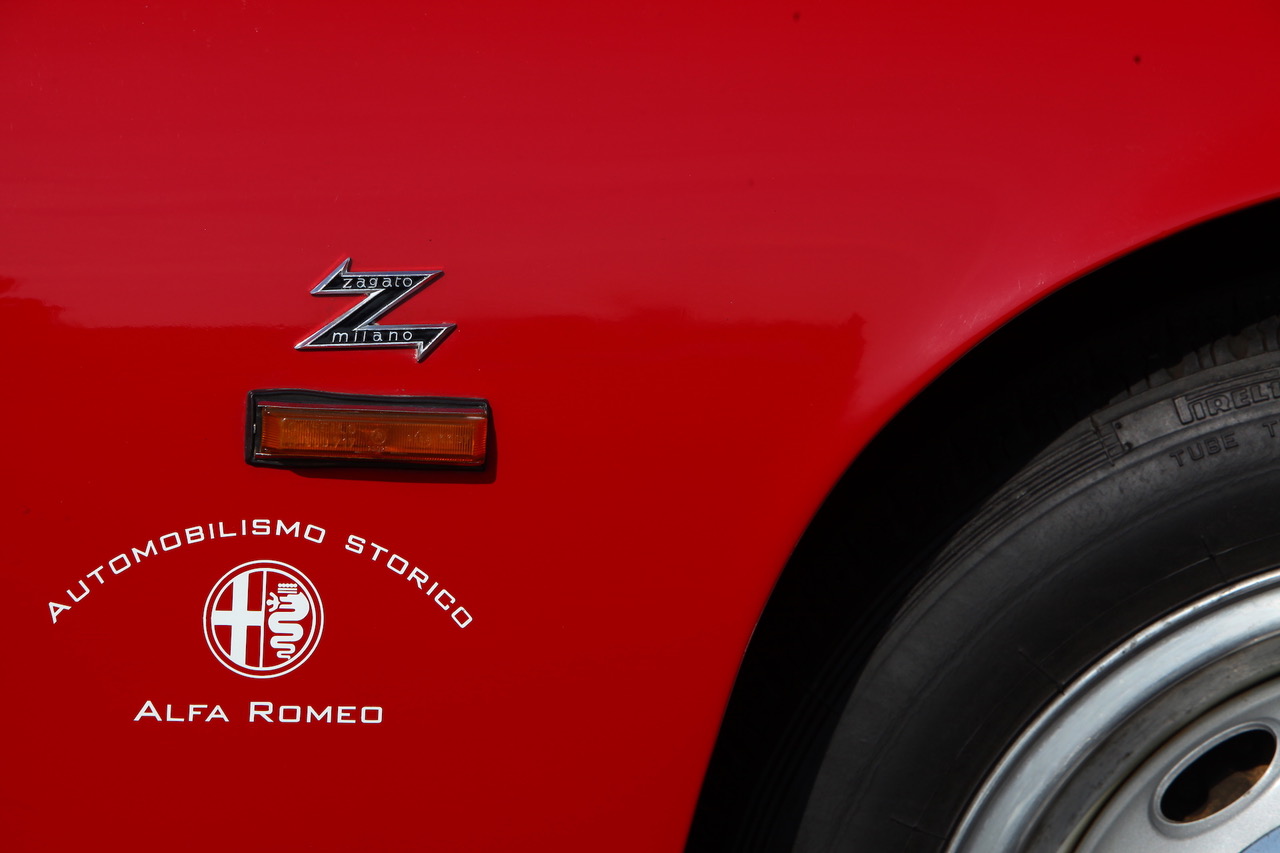 The narrow 155R13 Pirelli Cinturato tires bite bravely into the tarmac and the red Zagato can be easily balanced in a neutral cornering attitude, well, forever. I can see how one could drive a car like this to a race meeting, win it, and drive home without breaking a sweat. It's not the speed per se, it is the lightfooted precision it shares with a hungry butterfly. It's as if the ugly face of inertia was suddenly banned by an order of the house of Zagato. Stylists, designers have in the last few decades forced upon us those huge, ungainly wheels painted with a thin layer of rubber on the outside. This car brings us back to the classical idea of harmony: you don't introduce anything to the design that is not strictly necessary. 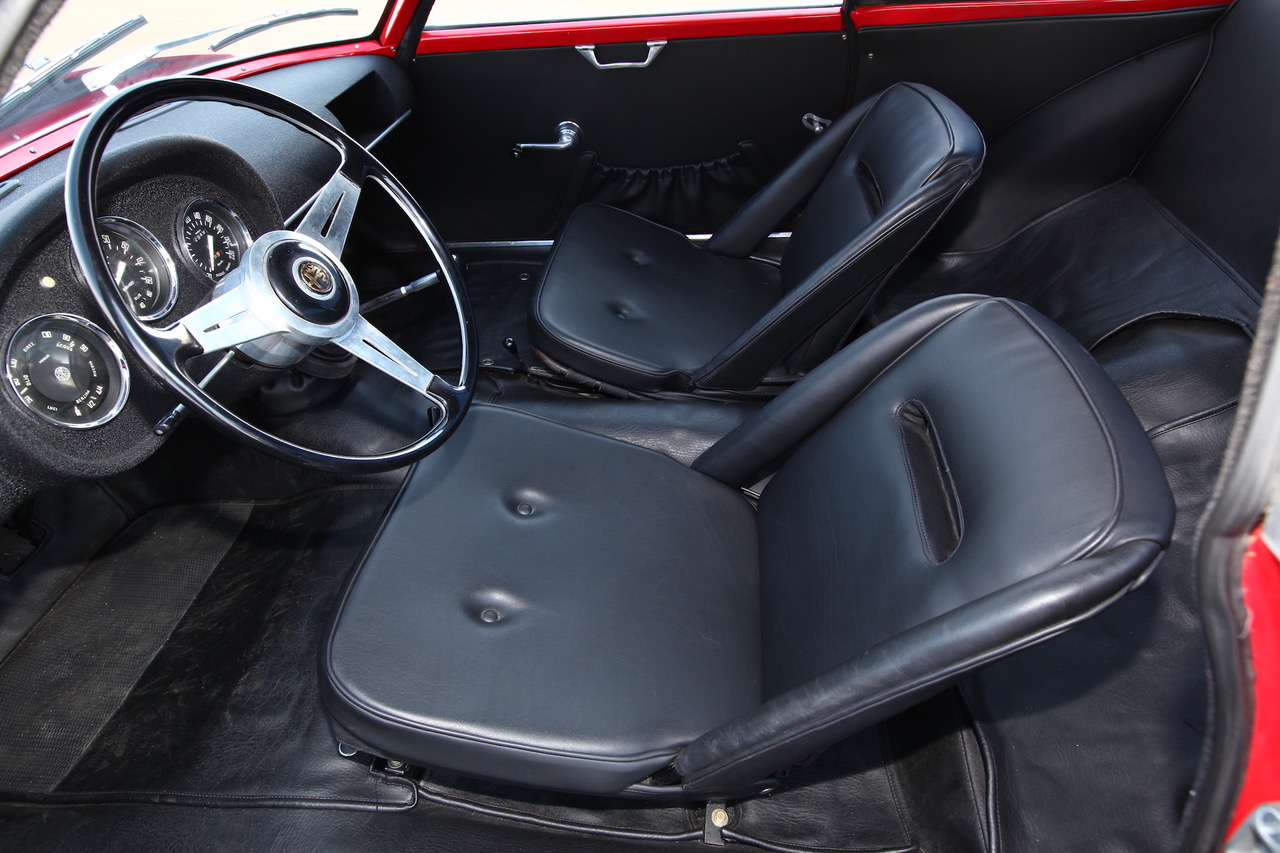 Like I said, the Alfa twincam motor needs revs. Above 4000 rpm it starts to sound different, clarion-like, and pulls smoothly all the way to around 6500 rpm. The acceleration is never violent or scary, of course, with that little 1.3, but it is enchantingly progressive. I can imagine myself in this aluminum projectile on twisty and slippery Sicilian routes, for instance. SZ cars of the two production series contested over 160 races in their original racing career, including performing at Monza, Targa Florio, Innsbruck, Nürburgring, Oakes Field, Tour de France, Solitude, Trier, Vallelunga and Norisring, finishing on the podium 35 times. It was a good competition weapon with a lot of everyday civility thrown in, also extremely reliable for the period. 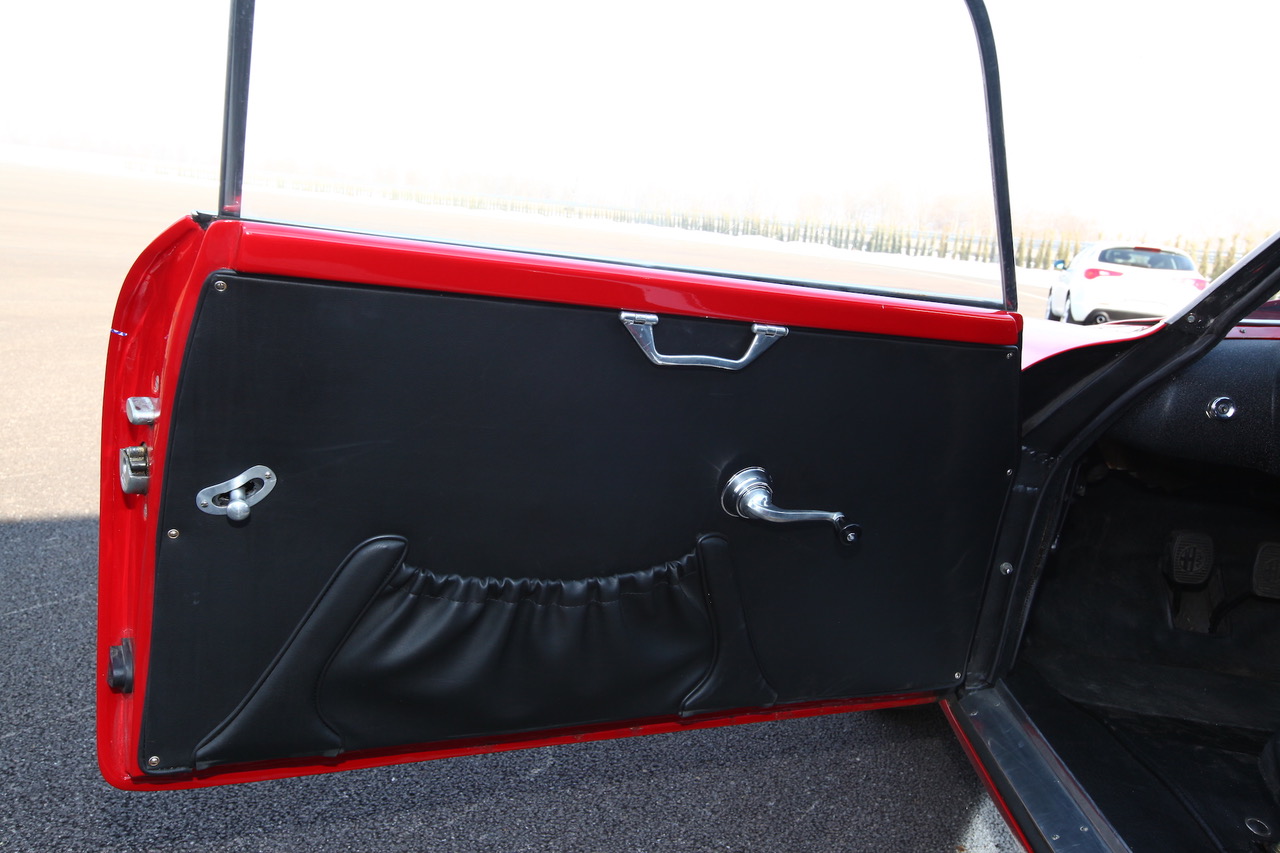 Easy to fall in love with this car which feels stable up to 160 kph. I daren't go any faster because too many people are watching and there is some other traffic on the test circuit. Compared to German sports cars of the era the Giulietta SZ is refined, sophisticated and elegant. There is no brutality here at all, only speed and lightness. Like in a butterfly. The golden age rules? You bet.