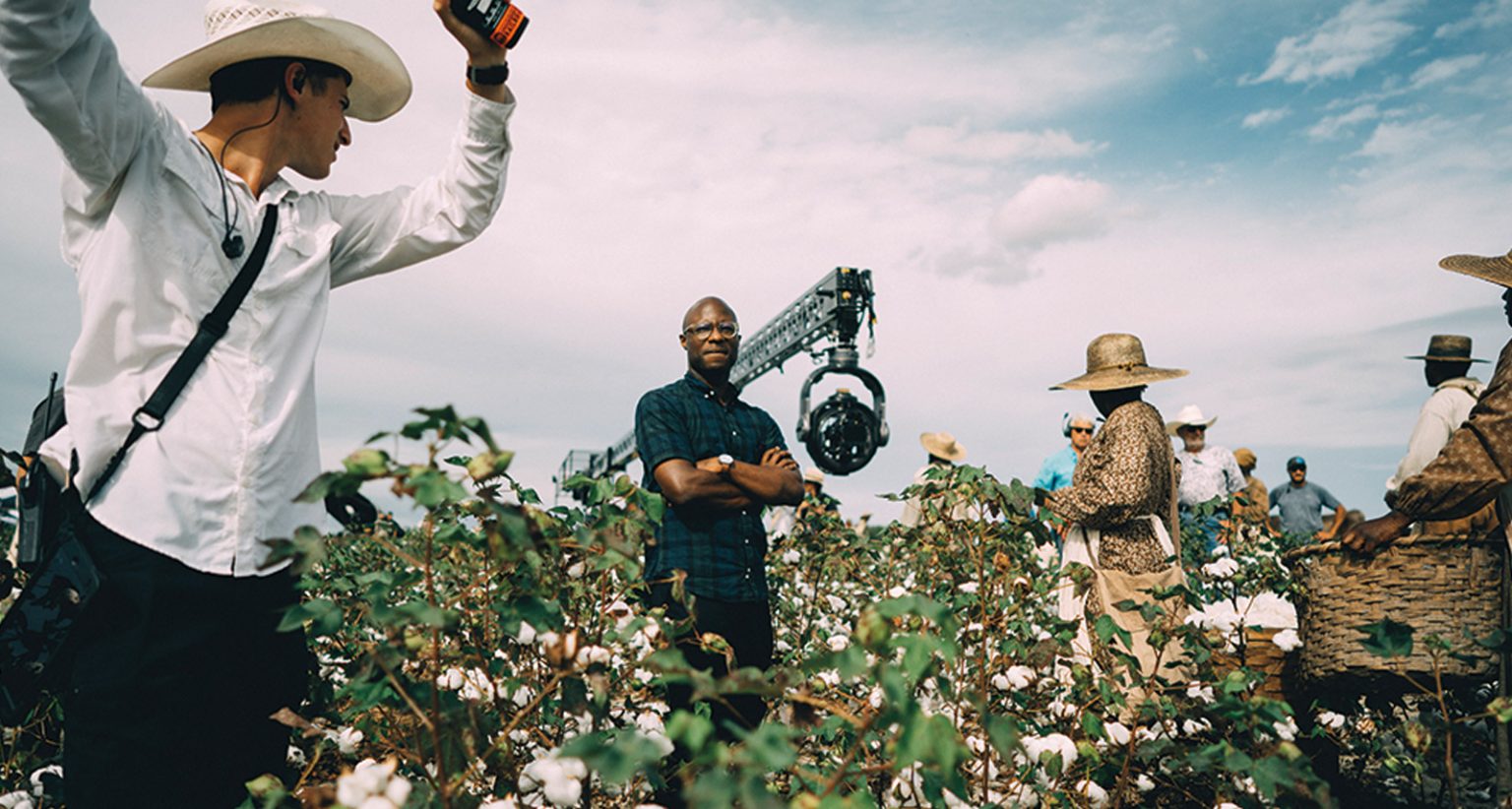 The past five years have been good to Barry Jenkins. After directing Moonlight (and winning best picture and best adapted screenplay at the 2017 Oscars) and 2018’s If Beale Street Could Talk, he announced he would be taking on Colson Whitehead’s soon-to-be Pulitzer Prize–winning novel The Underground Railroad as his first foray into television.

The series, which debuted on Prime Video in May, is a sweeping 10-episode arc that follows an enslaved young woman in Georgia named Cora (Thuso Mbedu) who, along with the also-enslaved Caesar (Aaron Pierre), travels across the American South on a literal underground railroad — all while being trailed by a slavecatcher named Ridgeway (Joel Edgerton).

What Jenkins achieves with The Underground Railroad is a rare feat: an unflinching portrayal of slavery that doesn’t dehumanize its cast. Speaking to Sharp from his home in Los Angeles, Jenkins discusses the massive undertaking of adapting a part of his own history, editing a television show during last year’s uprisings, and championing emerg­ing talent.

Watching The Underground Railroad, it hit me that you’ve been working with the same people since making Medicine for Melancholy. Now, you have this show with a huge scope. What has that journey been like?

It’s cool. I ran into someone I hadn’t seen in 15 years — a friend I knew in my San Francisco days; he works in wine and has a vineyard that Lulu [Wang, film director and Jenkins’s partner] and I drove up to for a few days — and I was like, “Man you haven’t aged a day!” And we both laughed because I realized we are just aging together.

That’s kind of how it is with making this work with who you truthfully refer to as “my day ones”. I think that our toolbox has been expanding and our scope as human beings has been expanding. It’s so weird, because when we’re in it, it doesn’t feel like the scope has changed at all. Especially for [cinematographer] James [Laxton] and I, it kind of feels like we’re running around with a camera trying to make Medicine for Melancholy.

I’ve been watching the show now — [and] I’m so in it [that] I almost have tunnel vision and this microscopic kind of view. But now that I’m watching it, I’m like, “Holy shit! I guess the scope is very big.” I think the good thing is that I never allowed myself to feel that way making it; that way, I never get overwhelmed.

It’s also crazy to watch because it feels familiar, based on your style, but obviously it’s so different from anything you’ve done.

I think the thing for us is that it’s always been about the character, and Cora is so amazing. For one thing, many don’t often centre characters like Cora, whether it be because she’s young and Black, but also, we tend to shy away from telling stories about enslaved people. I think the combination of those three things is inherently unique and worth listening to and spending time with.

But James always likes to go a step further and says, “This episode of this show looks and feels this way because this is the main character.” With Cora going from state to state, it inspired us to open our toolbox even more. It’s interesting because I never think of the scope of the things we do, but watching your face as you’re expressing this, I’m like, “Oh damn, I guess it’s a huge show!”

It really is! It also seemed like such an intensely long process compared to shooting a film, especially considering you were almost done when the pandemic hit.

We were scheduled for 115 days and we got through day 112, and then the world shut down. So we stopped March 12 and picked it back up on September 20. That’s a pretty big gap, and so much happened in the intervening months. The entire world literally changed, especially in the U.S.

Wow. Reading the production notes, you wrote an essay about your experience taking this show on. You mentioned fearing this project because of its historical scope. This is your own history and ancestry, too. Could you elaborate on that fear?

You put it exactly the way I think it is for me, which is that this is my history, and yet it’s a history that feels so — I don’t even know the word for it — electric? Not electric as in exciting, but more as in, “Don’t touch the third rail because you will get burned and killed” electric.

It’s always been something that is quite confusing for me. It’s almost like, do we not want to acknowledge that this happened? Should we not acknowledge that this happened, or are we better not acknowledging it? I’m an artist; I usually don’t need to think about those things when I’m going to create a work of art. But in this case, the history we’re speaking to — and this is a work of fiction, not even actual history — does speak to something factual and of historical record with these characters.

Even in that, the sensitivity around the subject matter and the potential to upset, inflame, and traumatize is so great. That fear is something that you have to have. I think if I didn’t have that fear, I wouldn’t take the care that I did. Everything I’ve learned growing up in this country in the way that I did taught me that these are images to be ashamed of. I think I needed to work past that and ask myself, “Wait, who was telling me who was ashamed of these images?” My ancestors were the ones who were subjected to this trauma and we have nothing to be ashamed of. It was a process that was both very emotional and intellectual to unpack that and get to a point where I could just make the damn show.

It’s not an easy show to watch, and as I was watching it, of course I was thinking of the very real and deep pain we still endure as Black people. And it dawned on me that as you were working on the tail end of this and doing a lot of the editing, it must have coincided with a lot of protests and last summer’s uprising.

Not too long after we stopped shooting, George Floyd was killed. I remember our editorial offices were right outside Sunset Boulevard, where we would see protests go by every day as we were inside cutting these images. It was speaking to the continuum of these horrors that have been put on our people for hundreds of years and [are] still happening today.

It’s all out in the open; people are recording these things as they’re happening live. Of course, it’s impacted what we’re doing. To be honest, at the very beginning, I was a bit disappointed we already made the show. I was like, if we could’ve made this show now, I would’ve made it completely differently. Of course, we didn’t have that luxury, but as we got deeper and deeper into the editing process, I realized that everything we did was actually about what is happening right now. It’s always been happening. It was a tough show to make, and a tough show to edit, but it did make us realize why we were doing it.

That’s so interesting. There are a lot of discussions right now about entertainment and Black suffering and trauma, kind of what you touched on here. From the first episode, the show’s pretty brutal in that sense. What is it like for you internally to see violence play out in real life and then confront what you directed onscreen?

I think this subject in particular is one that I feel like hasn’t been dealt with as forthrightly, you know, as it should, given the role the condition of American slavery plays in American history and in the founding of this republic. I think because of that, I felt like this show was still walking in the footsteps of the other depictions of this time that have come before. There are really only four other pieces of content, and I say that because the entire time I was making the show, from the moment it was optioned to essentially the premiere, “Make America Great Again” is still a thing that’s spoken everywhere. And we filmed this entirely in the state of Georgia, so I had to see that. When you say “Make America Great Again”, you’re assuming that it’s about the time we’re living in now.

The role of a piece of art like this is to fill this vacuum and cavity that has been created in American history, or at the very least the public consciousness of understanding American history. It’s funny; I always struggle with this question. The reason why I struggle with it is that, to me, it seems so obvious. And I hear myself talking away from the thing I created, and towards this conversation that shouldn’t necessarily exist. One of the very first Hollywood feature films was called The Birth of a Nation (originally The Clansmen), and this idea of depicting Black trauma is not something that begins with Black creators.

Now that we have this history of demonizing Black folks and people of colour in this medium, I think it’s time for some of us to set the record straight. I’m glad you mentioned the depiction of the brutality in episode one: it is just a presentation of what it is. And it is so barbaric that any over-sensationalization is unnecessary. Okay, [laughs] this is getting pretty deep, Sarah!

I know! We’re really getting into it now, and we don’t have a ton of time here. I guess, thinking about this show and when these things happened to the present day, Black suffering is just unending.

Sometimes watching the show felt like a horror movie, where I just felt the pressure and fear mounting — especially in episode two.

This has been a very heady talk, and most of the interviews I’m doing about this show have been very heady. And yeah, the show’s deep and very, very serious. And yet, I’m also a craftsperson. Part of the project, as heavy as it was, was also very stimulating and fun. Because Cora’s journey does take us through different genres. I’m the guy who makes romantic dramas, [but] in this show, I got to make a Western; I got to make psychological horror! At certain parts, it felt like a fucking action film.

It seems like in your work, you really champion relative newcomers and bring them into the spotlight, which is so great because they often go on to do amazing things.

I think all the folks I work with are extremely talented. Sometimes you have to ask the question, if they are extremely talented, then why haven’t they broken through? Why haven’t they gotten to showcase their talent? We assume, “Oh, there are no roles for these actors, blah, blah, blah”. Then create the roles, and when you create these roles, it gives people actual access to it. I’m not looking to cast unknowns or breakthroughs. I just want these actors to show me who these characters are, and that opportunity belongs to anybody. Nothing against movie stars — Regina King is a movie star, Joel Edgerton is a movie star — but I’m not out here trying to work with movie stars. I want to work with actors, and so many people have talent and just haven’t been given the opportunity to showcase it.