Daniel Ricciardo just can’t seem to stop smiling. Google image search him; dude beams even when he’s trying to look serious. No wonder the Red Bull Racing driver has earned a rep as Formula One’s Mr. Nice Guy. But there’s something slightly wild to that glued-on grin. Check out the way the Aussie won the Chinese Grand Prix in April: by making a ruthless, nearly reckless dive from far behind to overtake Lewis Hamilton, Sebastien Vettel, and Valterri Bottas. Or, crazier yet, the way he somehow managed to win in Monaco this week with an ailing engine. Behind the Cheshire cat is an ice-cold assassin. He’s The Joker of motorsport.

But that’s on the track. Off it, Ricciardo’s a bowl of sunshine. During any given day on the F1 circuit, you’ll catch him hitting up the host city’s nightlife, chatting up locals, and practically living in swim shorts. Fittingly, he’s even released his own line of colourful trunks with Orlebar Brown (available in Canada at Holt Renfrew). The 28-year-old lives for the summer, and this one might be his wildest yet: he’s entered the F1 title race conversation, and he’s a very real threat. Just another reason to smile.

When you won the Chinese Grand Prix back in April, you seemed pretty emotional on the podium. What were you thinking about?

I don’t know! I guess every year I do this, it’s another one I’ve dedicated to the sport. There are so many variables to it and lots of the time it doesn’t go your way, for reasons that are out of your control. And yet, it fell into place, and suddenly it just hit me — it was a mixture of everything. It was a relief. But, I mean, a week before that it felt like my heart was getting ripped out of my ass. [Laughs.]

Yeah, I was forced to retire after a single lap at the Bahrain Grand Prix due to a mechanical failure. I put in all this effort before it, but I had nothing to show for it. It plays with your emotions. Even China was a bit chaotic — my engine blew up during the final practice.

Your job sounds like an endless saga of highs and lows. How do you stay sane?

I try not to invest too much in the sport emotionally. You’ve got to be prepared for the ups and the downs, because so many things happen that the driver can’t help. If you set up too many expectations, a lot of the time you’re going to be let down. So I try to stay as grounded as possible. It’s important to have other interests so you’ve got things to distract you when it’s not going well. I don’t live solely for the sport.

Have you always had a Zen mentality?

No. Especially in my first year of F1, I was super over-focused. It’s much worse because if something happens, you’re like, I did everything perfect and it’s still not working! It can screw your head up even more. So I learned my lesson a few years ago.

Was there a specific moment that flipped the switch for you?

Yeah, I’d say it was around 2013, after the Montreal race, actually. It was one of those nightmare weekends. I was scratching my head the whole time and overanalyzing everything. I just needed a break from it all. So I went to New York for a few days, hung out, and just completely switched off. That reset everything for me in my mind. It was a turning point. With F1, I found myself travelling the world but not actually seeing the world. It was airport-hotel-racetrack-hotel-airport. I was too caught up in the racing. Now I make a point to spend some time in the place I’m in, and I enjoy the job so much more. If the F1 ended for me tomorrow, I’d still be happy. I’d feel like I’ve seen so much because of the sport.

Work-life balance is key. But isn’t it also a slippery slope?

Well, when I’m present within the race, I’m 100 per cent as serious as I’ve ever been. But when I get off the track, then I completely switch off. I think it makes me enjoy the race more because it keeps it fresh and interesting, since I’m not thinking about it all the time. I can be more present. I’m spending less time with it, but more quality time with it.

The way you overtook Hamilton and Bottas in Shanghai is essentially your finishing move: a Hail Mary surge down the inside from a long way back. How’d that become your thing?

I swear, if you’d told people a few years ago that I’d now have this reputation, they would have laughed. Everyone always used to see this happy, smiley kid, but they never really saw the killer in me, I guess. [Laughs.] You just have to be confident. With overtaking drivers, the one thing you need is decisiveness. It happens so quickly and if you’re not all in, if you’re contemplating for too long, then it’s done. So I’ve really committed myself to believing it’ll work. As soon as I say I’m going, that’s it. I don’t intend to crash, but I’ve decided that I’d rather try and fail than not try at all.

Too many people are afraid of failure.

Exactly. There were times when I was younger when I’d leave the track with regrets. Aww, maybe the race would’ve been different if I’d just attempted that. It was not a cool feeling. I never want that again. Especially in F1, there’s always pressure on you to perform, and there are always younger drivers or someone coming up through the ranks. Hesitation can be quite costly. You only get a few chances to prove yourself or your reputation can be tainted pretty quickly. So it’s important to have a go at it. Even if you don’t pull it off, people respect that you didn’t sit back.

Lately you’ve been taking a crack at making your own swimwear with your Orlebar Brown collection at Holt Renfrew. Why swim shorts of all things?

I’m very, very much a summer person. I want to chase the sun for the rest of my life if I can, and I live in swim shorts. Growing up in Australia, it was all surf brands. I learned about Orlebar Brown a few years ago when I saw some of my English friends wearing them. So when the Orlebar guys suggested doing something, I was all over it. The Austin and the Monaco ones are based around two of my favourite races on the calendar. The Orlebar guys were nervous about the Austin design because it’s pretty wacky and out there — they’ve got ribs and cacti and honey badgers on them. But they’re fun! That’s what summer is. 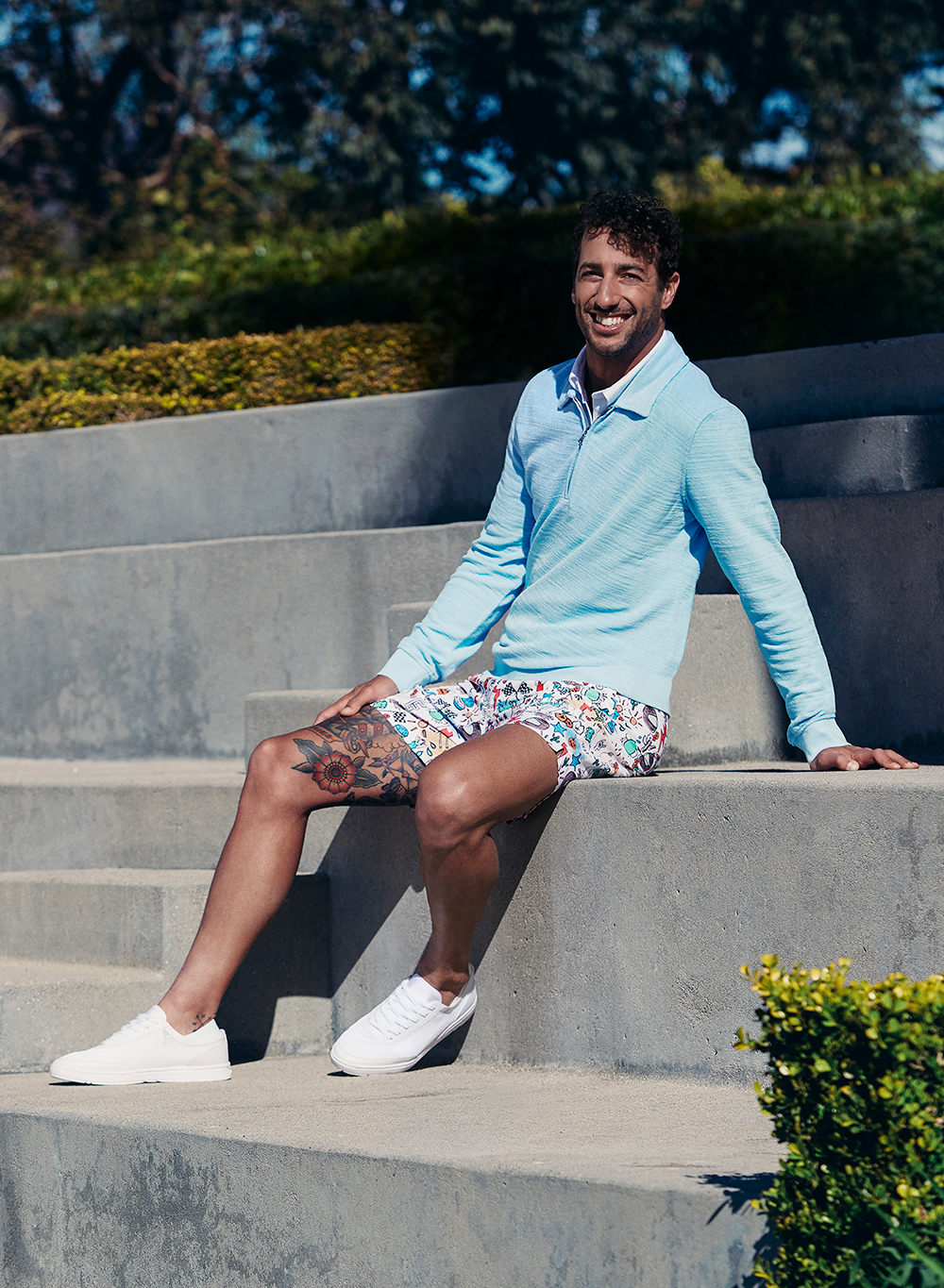 Let’s talk about honey badgers. Why are you so into them?

It started before I had the overtaking reputation, back when everyone thought I was just a nice guy. My trainer knew that although I look innocent, there’s that real killer instinct inside me. He suggested the nickname to me and I fell in love with it straight on. I think I’ve done the honey badger proud. He looks harmless, but if someone tries taking his food or getting in his territory, he stands his ground. I like that.

What’s your favourite city to race in?

I got to do Austin City Limits last year, which was awesome. I love the music and the whole vibe in Austin. It’s a place I would go to even if we weren’t racing there.

What kind of music are you into?

Alexisonfire are my favourite band of all time. I brought them out to a race one year. Funny thing: two times in my career, I’ve had Alexis lyrics printed on the back on my helmet. The first time was in Montreal in 2014 — my first-ever win — and the second time was over the weekend in China. Alexisonfire are a pretty good omen for me.