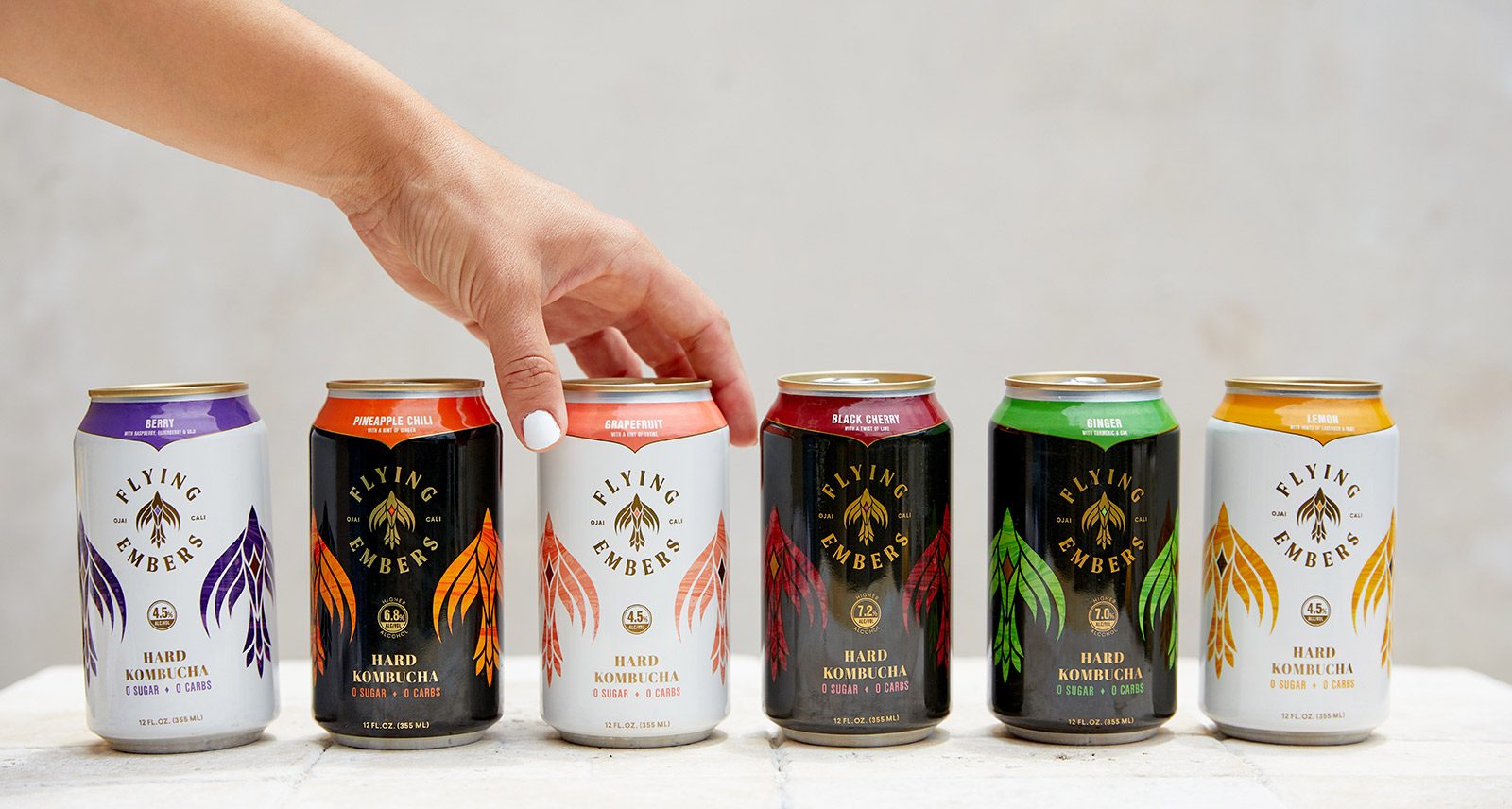 You’re likely familiar with kombucha, the fizzy, fermented darling of the health drink world that’s said to aid in everything from digestion to immunity. Now, a new wave of hard kombuchas are promising to deliver a better-for-you buzz, combining the perks of kombucha with a beer-like ABV. Whether you’re looking to try something new or curious about a buzz with benefits, here’s everything you need to know about boozy ‘booch.

The fermentation process that creates regular kombucha intrinsically produces some alcohol, but the percentage is so small (typically less than 0.5% ABV) that it can still be classified as a non-alcoholic beverage. Since alcohol is already an innate part of making kombucha, hard kombucha feels like a natural next step in the evolution of the drink, says Beryl Jacobson, co-founder of California-based hard kombucha brand Flying Embers.

To make hard kombucha, the fermentation process is extended or a secondary fermentation takes place, allowing the kombucha to develop higher levels of alcohol. The end result is a tipple with kombucha’s signature tart, lightly carbonated flavour and around 4.5 to 7% ABV. “It fits somewhere between the flavour and richness of a craft beer and the refreshing qualities of hard seltzers,” says Jacobson.

What are the benefits?

Regular kombucha is known for its probiotics, which are helpful bacteria said to promote digestion. It’s currently unclear if these probiotics can withstand the higher ABV of hard kombucha, plus alcohol of any kind can have negative effects on gut health.

So while hard kombucha can’t necessarily guarantee the probiotic properties of its traditional counterpart, it does contain the same polyphenols, which are associated with a wide range of benefits like reducing blood sugar levels. Although it varies by brand, hard kombucha is also typically lower in calories than your standard beer or hard cider. It’s also naturally vegan and gluten-free.

In short, hard kombucha might have some better-for-you perks over the average beer or wine but when you weigh in the broad negative health effects of alcohol, you can’t exactly knock a few back and consider it a health kick. Jacobson says that many customers are drawn to hard kombucha because they’re looking to live a more balanced lifestyle while still imbibing, while others simply enjoy the flavour or are interested in expanding their palate.

Hard kombucha comes in a diverse range of flavours and acidity levels. “Like with craft beer, all of the different hard kombucha brands have their own style of how they created it,” says Jacobson. “Their bacteria, their yeast, their timing, their fermentation – they’re all unique. I think that’s really a cool part of the category.”

US-based Flying Embers recently launched in Alberta, British Columbia, and Saskatchewan, with plans to roll out throughout the rest of Canada in the coming months. Available in flavours like Grapefruit Thyme, Black Cherry, and Pineapple Chilli, their hard kombuchas kick the wellness factor up a notch with zero sugar and added adaptogens. flyingembers.com

This Ontario-made bevvy is a blend of hard cider and kombucha. Produced in small batches, it mixes Honeycrisp apples with kombucha for a lightly carbonated, citrusy flavour with hints of lemon and pineapple. drinklabinc.com

These Gourmet Pantry Staples Will Seriously Improve Your Home Cooking