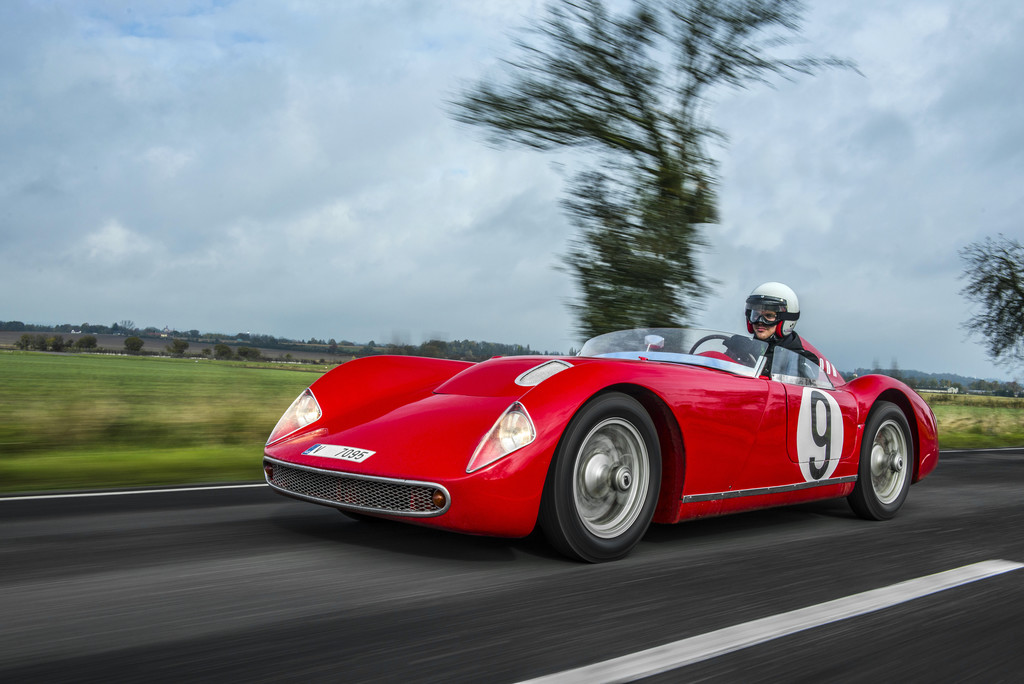 Right after the Second World War the people in Czechoslovakia were unaware of the horrors that the subjugation by the Soviet Union was going to bring. Most of the industry, which during the war diligently worked for the Nazi occupiers, remained intact, and in fact was able to continue producing such diverse items as the Messerschmitt Bf-109 and Me-262, the half-track personnel carrier Sd. Kfz. 251 (Czech name OT-810) and a number of other aircraft and weapons. Skoda was also quickly reborn, and as early as 1948 it sent cars to race in remote Uruguay. 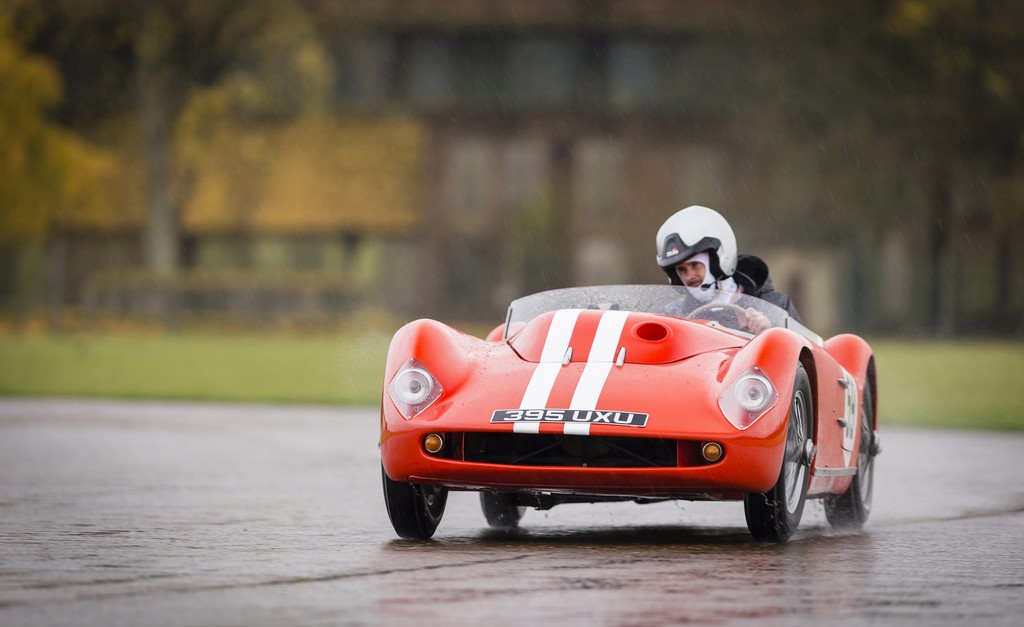 The Czechoslovak company was not lacking in ambition, and nobody there could expect that their country's relative independence within the Soviet Bloc would be savagely crushed in 1968, when Warsaw Pact forces invaded. Skoda wanted to go endurance racing with a car that now makes some Lotuses appear cumbersome and heavy. Skoda wanted to go back to its prewar roots, firmly embedded in its racing history (we now have the year 2020, which means Skoda has been competing for 119 years!). Internally the car was called "project 968", officially Skoda 1100 OHC, and two examples were built at the end of 1957. Stalin had been dead for 4 years and the whole Eastern Bloc believed that some light was finally entering through the Iron Curtain. 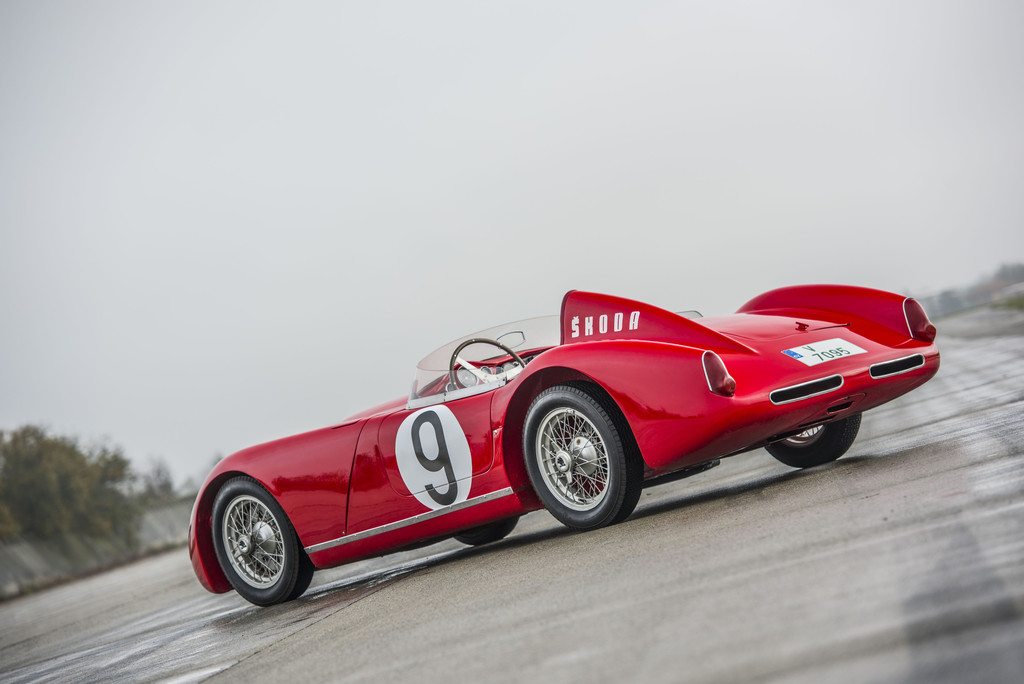 The sleek, low-slung racer was powered by a front-mounted, longitudinally-oriented inline four with twin overhead camshafts and a capacity of only 1089 cc. This was enough to produce 92 hp at 7700 rpm, and the free-revving unit was able to reach 8500 rpm. At that point in time a power output of 85 hp per liter was extremely rare. Due to the nature of the engine it had to run on avgas, high octane aviation gasoline.

The little red car was a true prototype, unrelated to other products of the brand. The basis was a tubular chassis welded out of thin-walled steel tubes, clad in a glassfiber-reinforced epoxy body. It weighed in at a scarcely believable 550 kilograms. Due to good aerodynamics, the car with its diminutive motor was capable of 190-200 kph top speed. At first, pop-up headlights were tested, but these gave way later to fixed front lights, aerodynamically covered in Perspex. The car was only 964 millimeters tall!

The Skoda 1100 OHC could boast a nearly ideal weight distribution: with a driver of 75 kgs in weight it became 49.7 % front to 50.3 % rear. The Czechoslovak engineers placed the clutch assembly, the 5-speed (!) gearbox and the differential at the rear in a transaxle arrangement, thus contributing greatly to the favorable balance of the car. The suspension, modern at the tail end of the 50's, consisted of trapezoidal links and torsion bars at the front, and a trailing link axle with torsion bars in the rear. The racing car ran on 15-inch wire wheels. 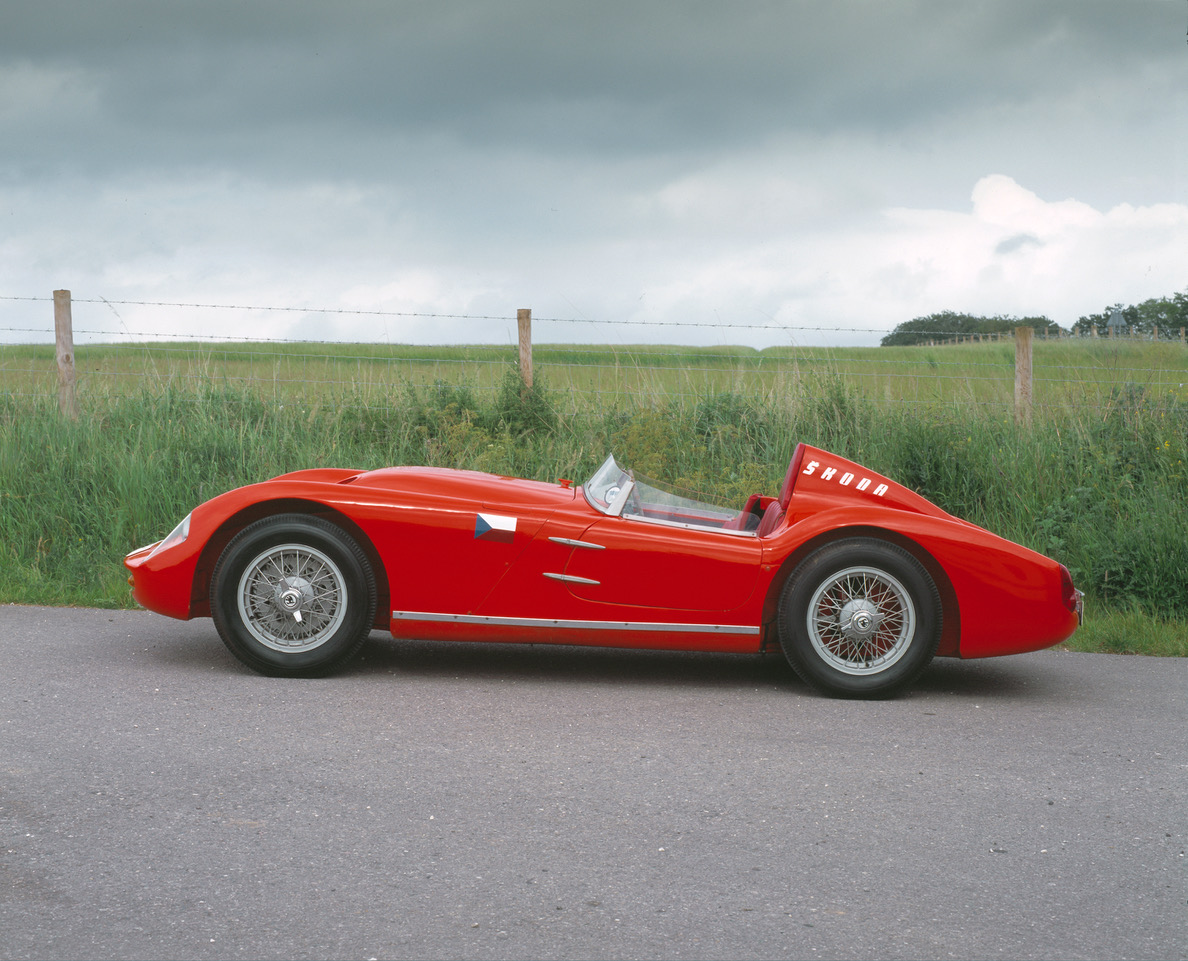 Miroslav Fousek, the Skoda factory driver, won the car's first outing, a street race in Mlada Boleslav, Skoda's hometown, in June, 1958. More local victories followed, plus a win in Leningrad (now back to its real name of St. Petersburg). Due to the political situation, the little Skoda never had a chance to challenge Western cars on track in period. Pity.

In 1959 two more Skoda 1100 OHC cars were built: based on the same chassis as the open-top GRP-bodied units, two sleek coupes were built with aluminum bodywork. Their performance was nearly the same, as the engineers were able to keep the weight down to an impressive 618 kg. Both coupes were subsequently heavily damaged in serious road accidents. The remains of one are now being painstakingly rebuilt at the Skoda Museum.

Luckily, both of the barchettas survive, one at the Skoda Museum in the heart of Bohemia, and the other, interestingly enough, in the hands of the Skoda import company in the UK. Still, seeing one in the flesh is an experience on par with seeing a Bugatti Royale, in terms of rarity.