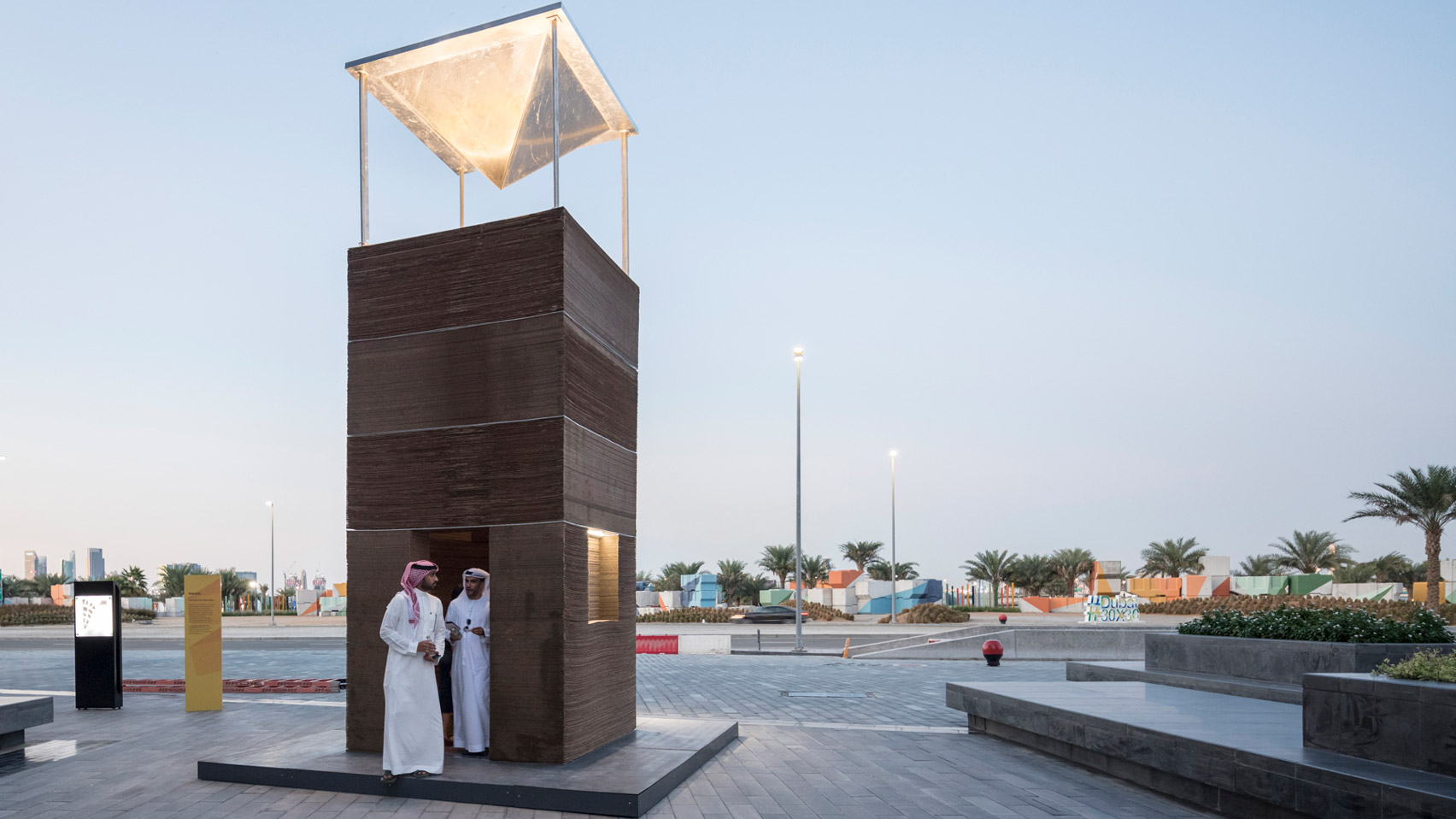 Located in Dubai's design district, the Barjeel – or wind tower – installation adopts a more traditional approach to air-conditioning than the electrical methods used in the surrounding high-rises.

Carved from layers of recycled cardboard and sheets of aluminium, the six-metre-tall structure was designed as a modern take on the wind towers found in the Arabian Gulf 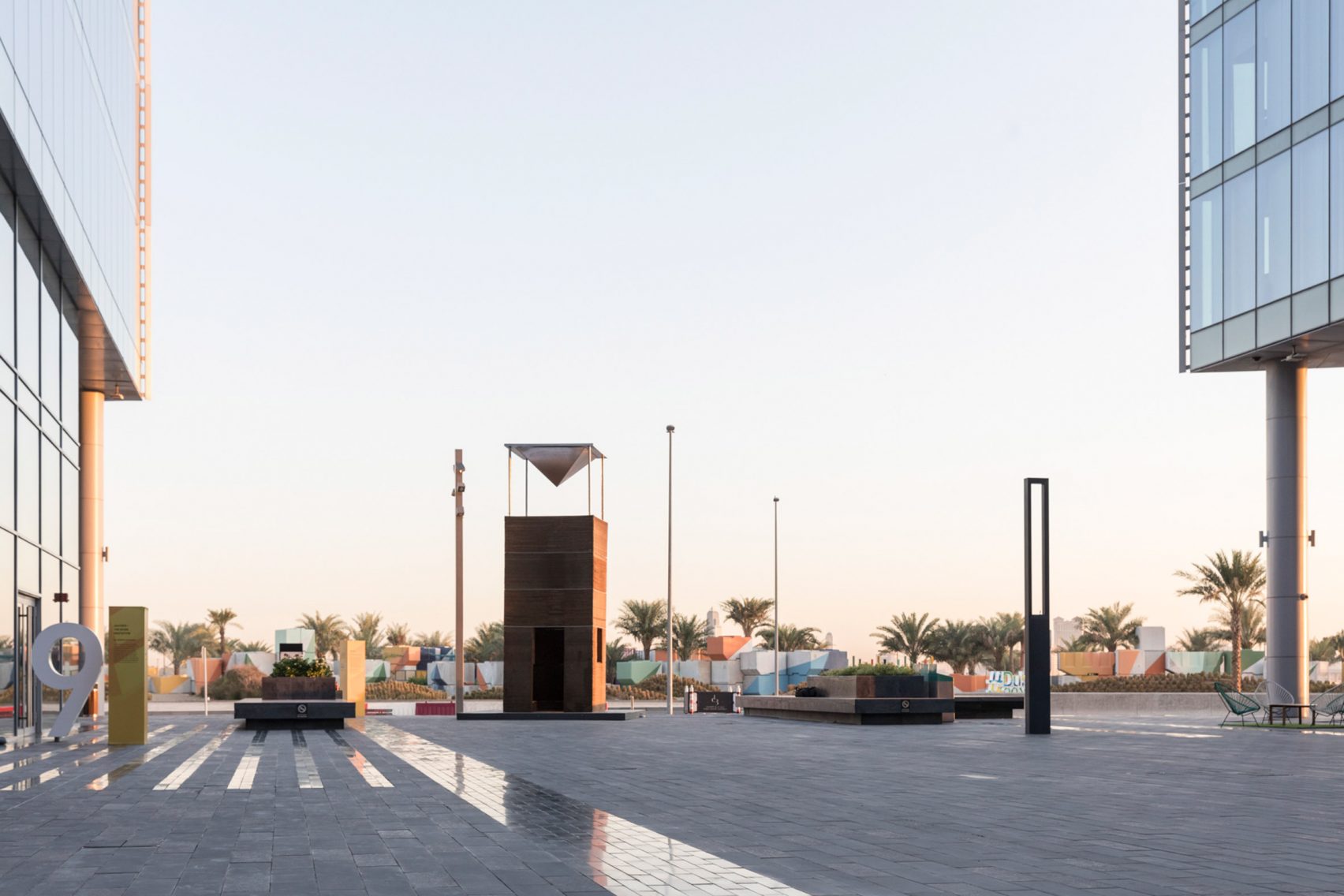 Intended as an "homage to regional traditions", the barjeel features a circular base, which can be seen in the seating inside, and a square body in reference to the simple geometric forms that are ubiquitous in Islamic architecture.

"Barjeels have been used for passive ventilation over centuries," MAS Architecture Studio founder Kerim Miskavi told Dezeen. "Nowadays they're being used less and less because, today, the typical answer to acclimatisation is high technology and mechanical systems."

"We wanted to create something that was specific to the region and drew inspiration from the vernacular architecture, but we also wanted to create a space where the visitors could come in and relax," he added. 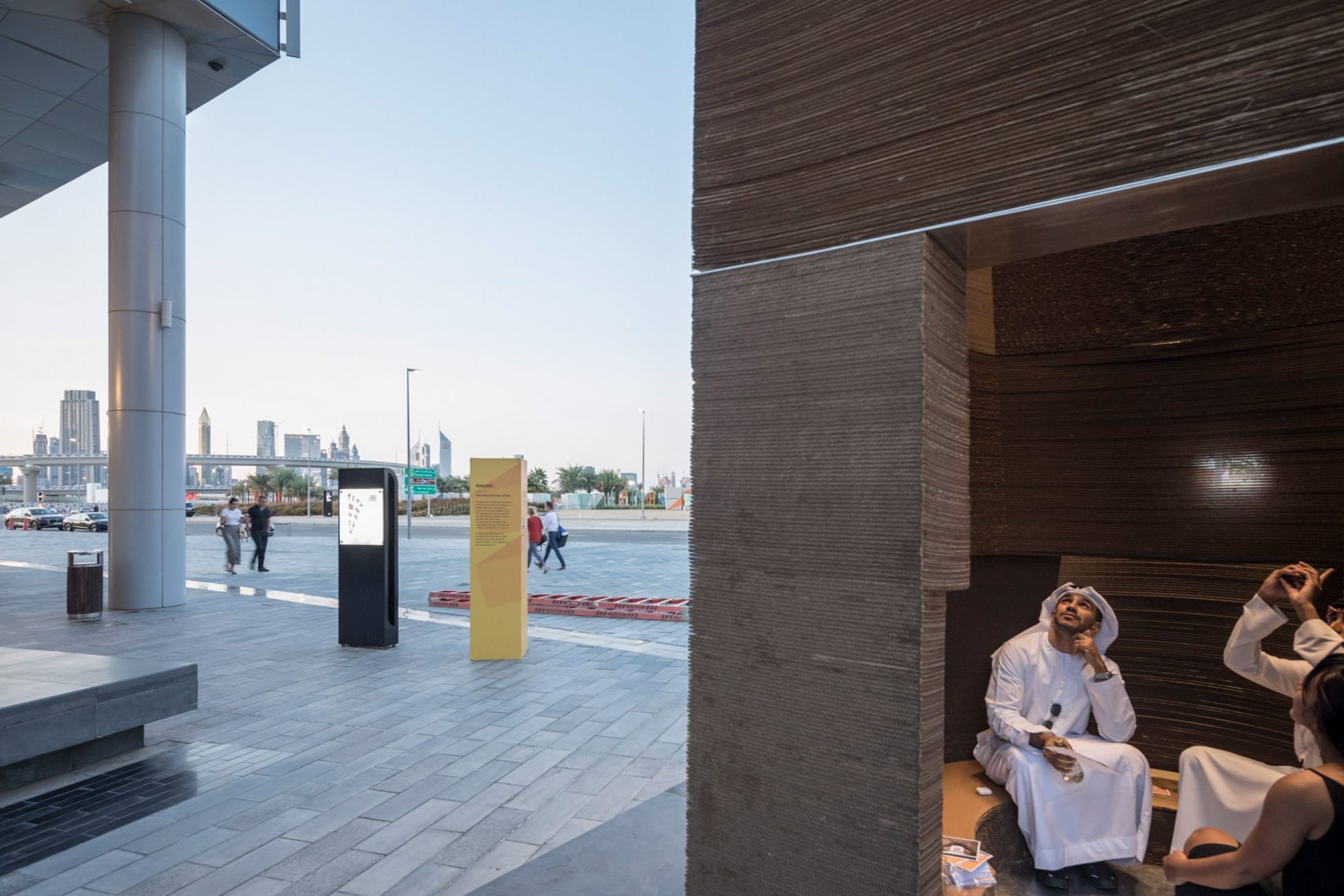 The installation works in the same way as a traditional barjeel – a wind catcher on top of the structure catches the wind and directs it downwards to bring a cool breeze into the space. Barjeels were commonly erected on the roof of a building.

Hotter air inside the structure circulates and rises to the top. Cut-outs are positioned around the structure just above seated head-level, to offer further breeze to those sitting inside.

Visitors can take refuge from the sun inside the tower, which was created for this year's Dubai Design Week. 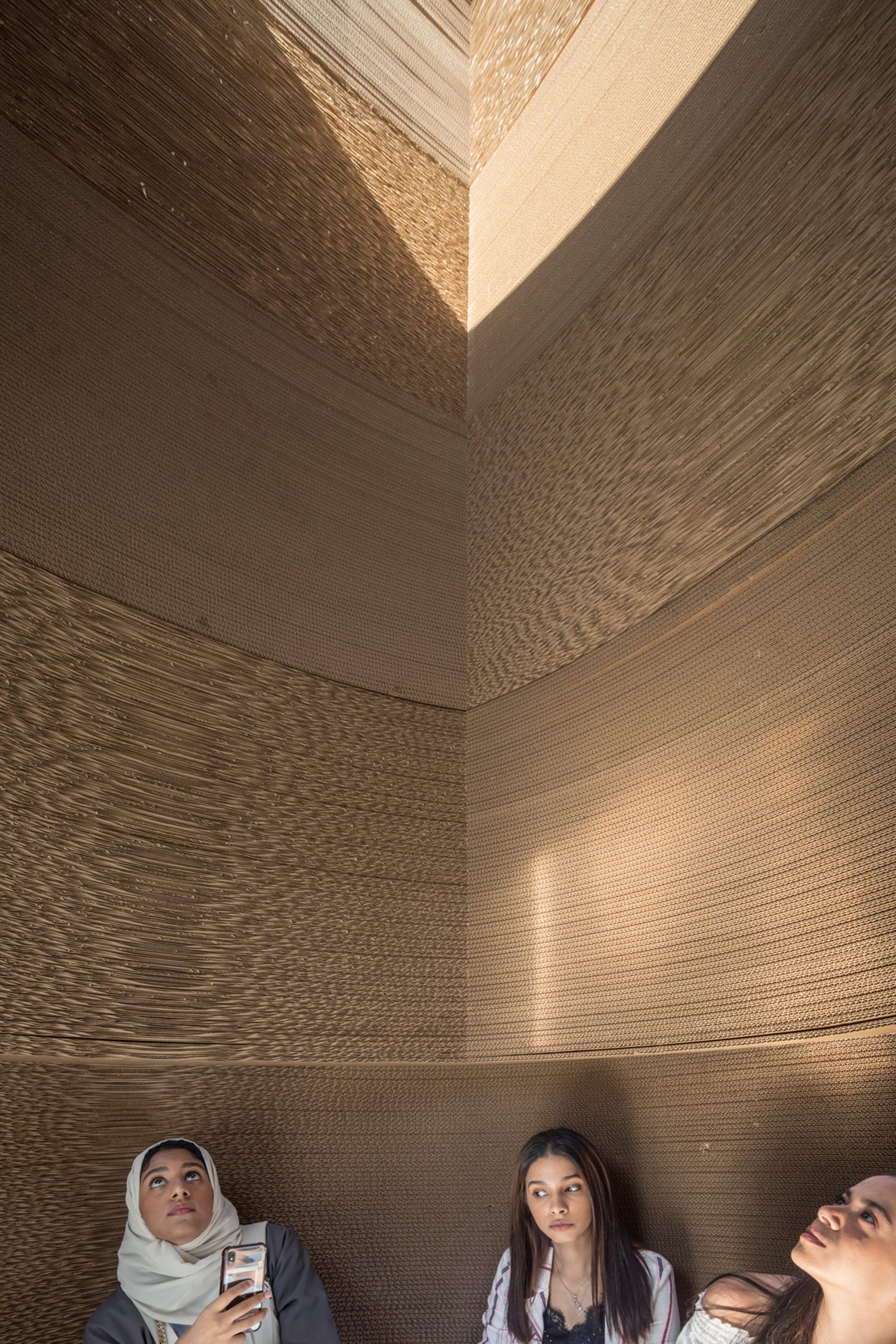 "Nowadays Dubai is known for its towers – a huge skyline with the Burj Khalifa and all these modern high-tech towers," said the designer.

"But when you think about it, the barjeel was probably the first tower built in Dubai, and it was used for a very different reason; it was purely performative and for people's comfort," he continued.

"We liked this notion that the wind tower is a very human phenomenon in architecture," he added. "It's a good mix between function and symbolism, but it's neither purely symbolic or purely functional, and I think it fits well in a context like this.” 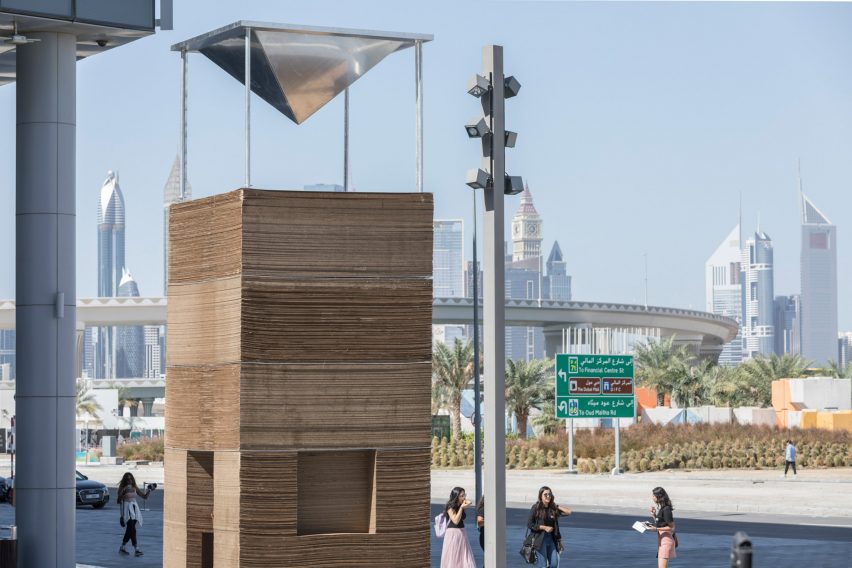 With the first examples dating back to 3100 BC, historically the wind towers were built to accompany small houses and villas in the region, acting as natural, non-electrical forms of air-conditioning.

Originally made from basic materials such as palm branches and leaves, the Barjeel gradually increased in scale and advanced in materials, eventually being made from mud, Clay and bricks.

The Istanbul-based studio designed its version of the structure to be zero-waste, assembled from 480 layers of reclaimed cardboard. 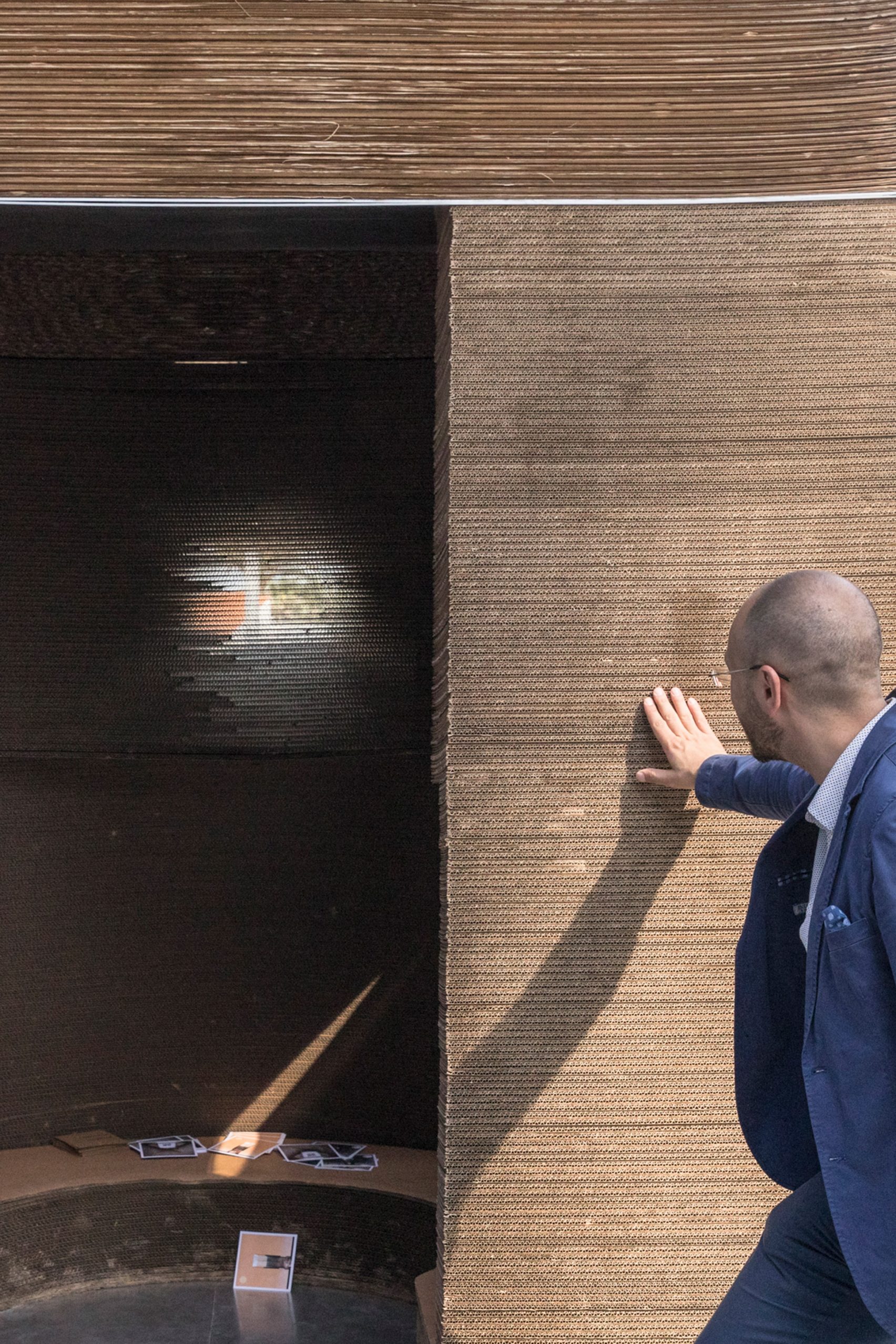 As Miskavi explained, the studio chose recycled cardboard not only for its sustainable qualities, but also for it's strong yet lightweight properties, as the structure had to be pre-fabricated in Turkey and shipped to Dubai.

The structure is fixed in place through gravity and compression, with no adhesive used to secure the layers together.

Between every 90 or so layers of cardboard is an aluminium sheet, while four aluminium posts penetrate the structure at each corner and attach to a metal base – which Miskavi describes as a "skewer-like" system.

Both the cardboard and aluminium has been left untreated, to keep the installation as organic as possible.

According to Miskavi, the corrugated design of the cardboard also grants the installation a "transparency" and "openness" by allowing some light into the structure. When rotated 90 degrees however, the material becomes solid and opaque. 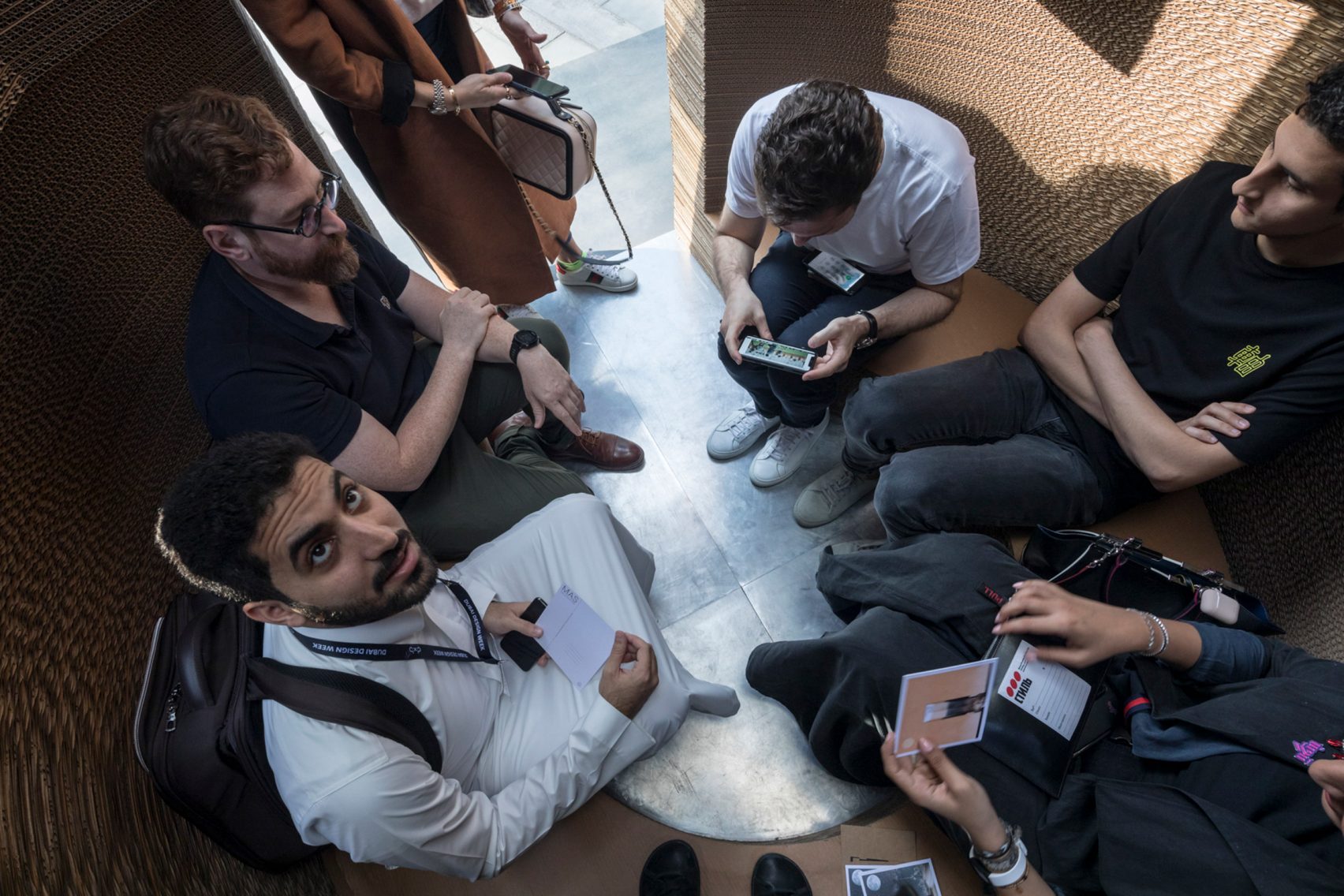 Now in its fifth edition, Dubai Design Week hosts an array of events, including the Downtown Design trade fair and the Global Grad show, as well as numerous installations and pavilions dotted around the city.

The annual event is taking place this year from 11 to 16 November 2019, with most attractions located in the city's design district, also known as D3.

Photography is by Laurian Ghinitoiu.

Why Stage Designers Are the New Concert Headliners