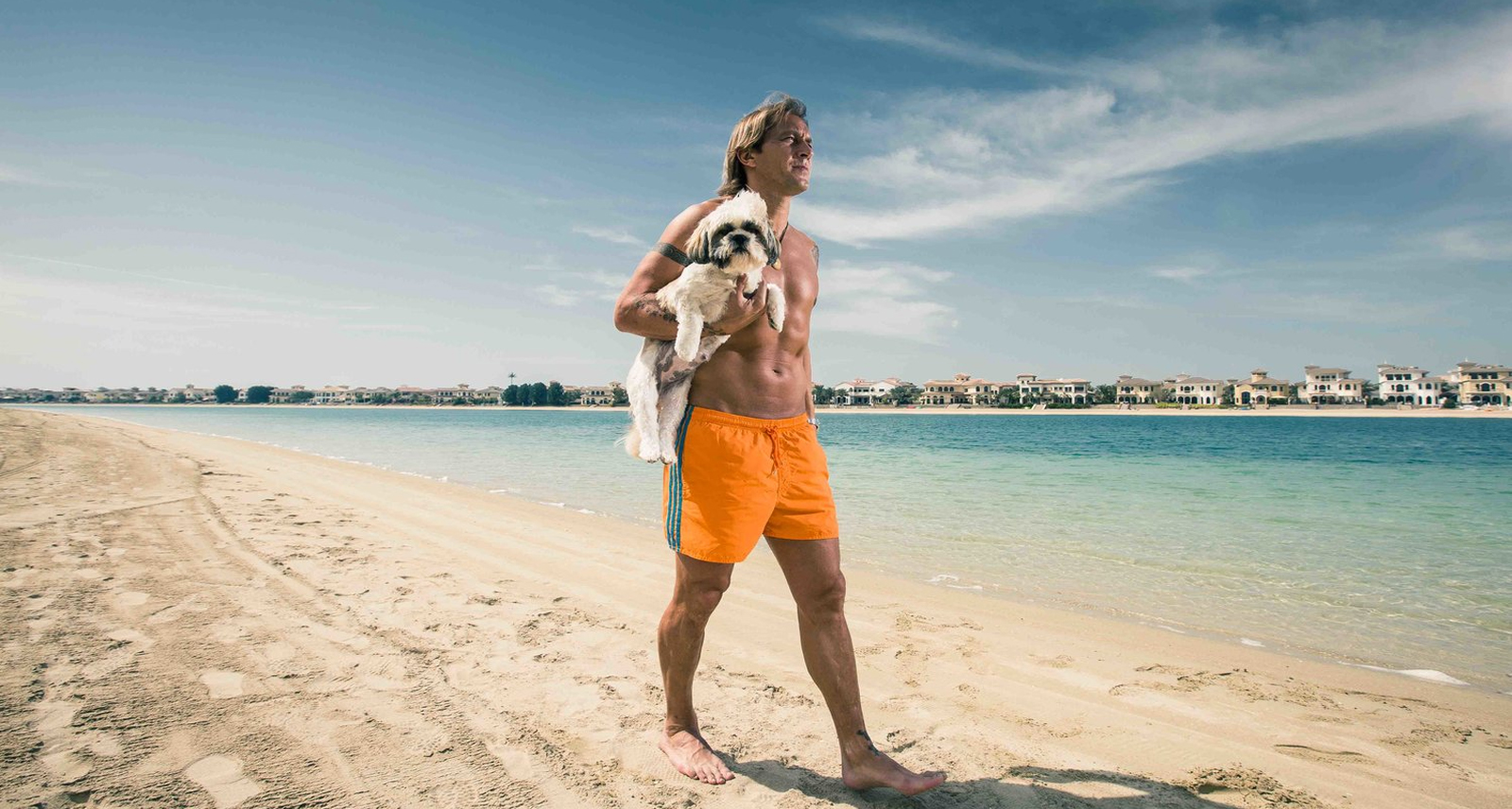 Michel Salgado pulls up in a sleek red Corvette right outside his beach house on the Palm Jumeirah strip. There’s a cool spring breeze, the perfect afternoon for a top-down cruise around Dubai. The former Real Madrid football star gets out of the Z06 model, donning a white polo shirt and tracksuit bottoms. Despite being retired, the 40-year-old is still in perfect shape, as if he’s just completed a World Cup tournament. 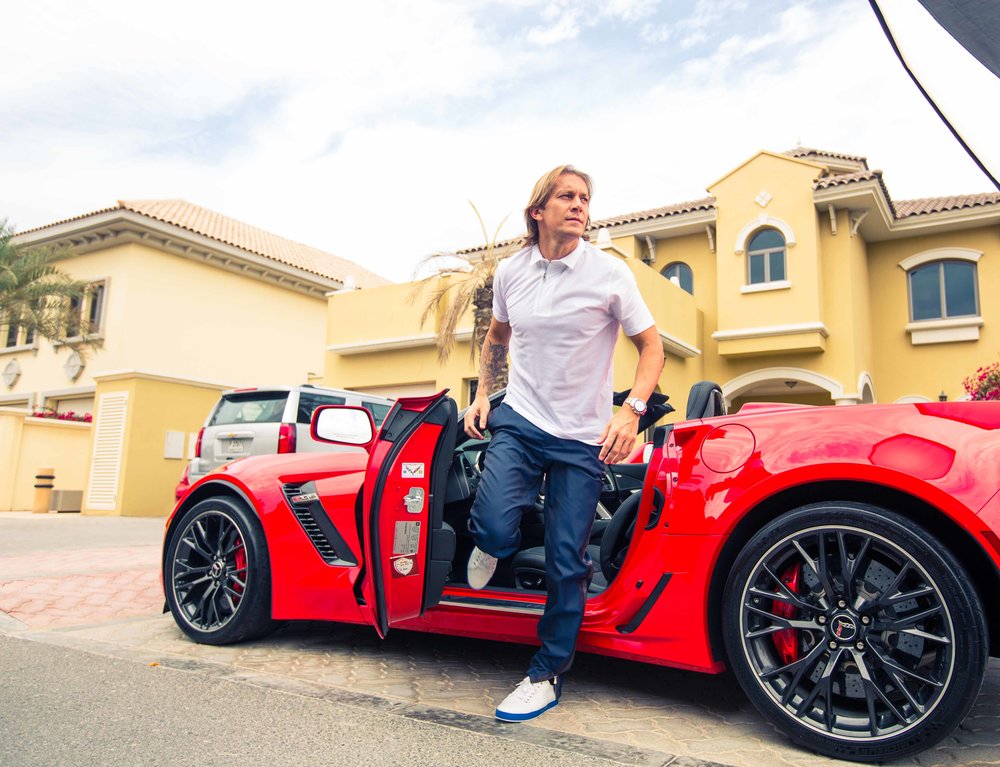 Today, he lives in Dubai and, as global ambassador for the Spanish football association La Liga, plays an influential role in promoting the sport in the Middle East. He’s Director of Football at the Dubai Sports City Football Academy as well as Championship Director for du Football Champions. Since moving to Dubai, his first initiative at the academy was to bring his experience in football and help children in the country develop their athletic skills.

“I came to Dubai for the first time in 2003 and fell in love with the city and the opportunities it offers,” he says. “I have seen some first-class youth footballers in the Arab world who are hungry for the chance to play professionally. We know these kids need professional training to help realise their dreams of becoming professional football players, and this reflects my commitment to developing the future of sports in the UAE.” 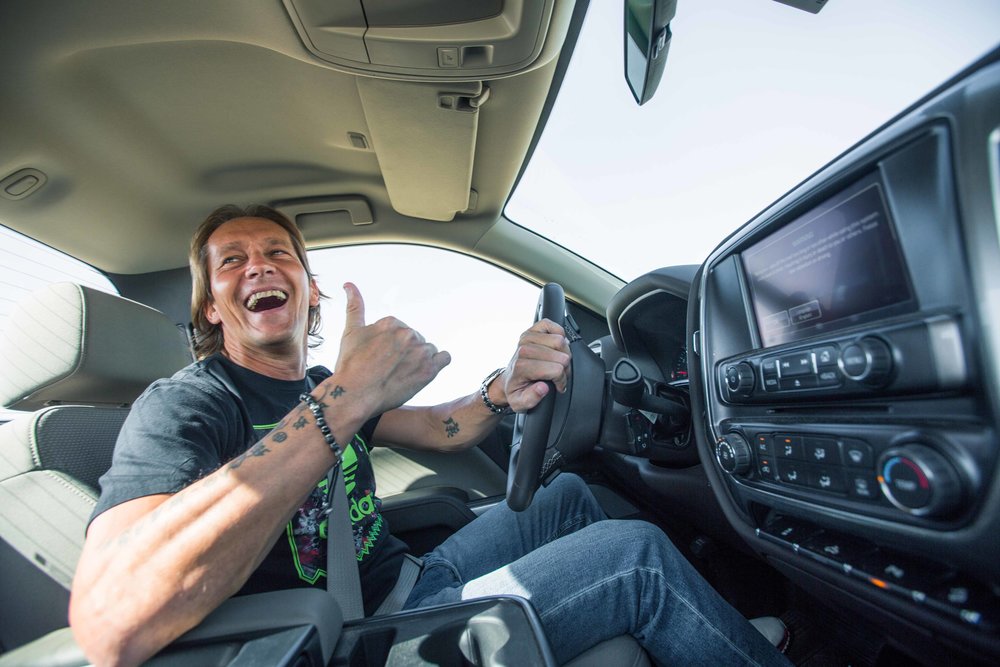 In his quest to promote the sport across borders, Salgado has be travelling throughout the Middle East for the TV programme The Victorious (aired on Dubai TV and Dubai Sports TV) which hunts for budding local football talents – some from extremely poor backgrounds. “I’m really proud of what we are achieving through The Victorious show where we are giving a once-in-a-lifetime opportunity to Arab kids that in most occasions have nothing to fight for,”
says Salgado. 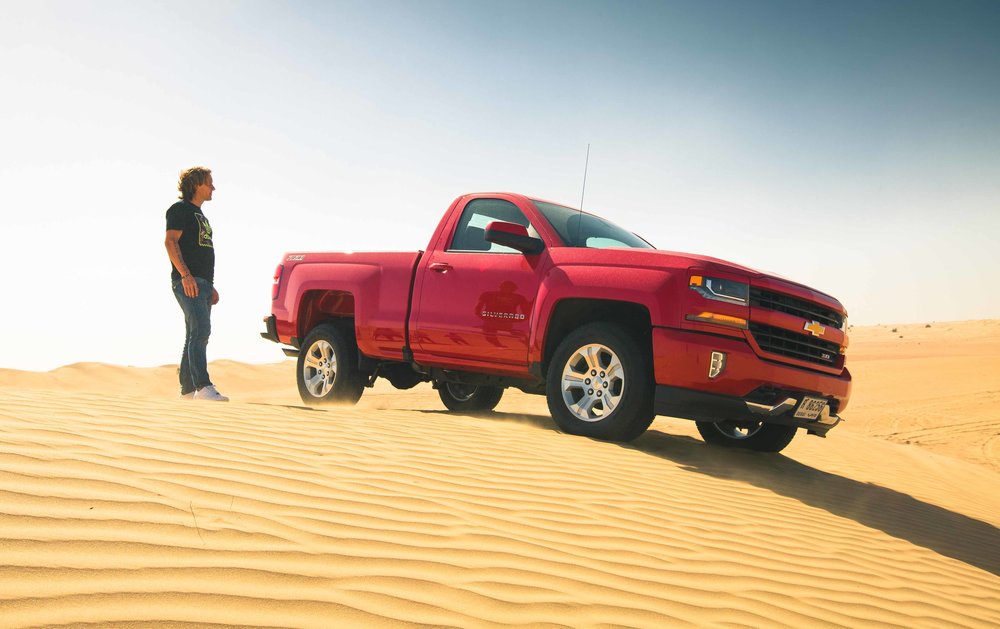 The toughest challenge in working with such initiatives is the process of nurturing potential young talents. Identifying bright young individuals with promising future may be a demanding task; but the real challenge involves mentorship by proper professionals, which can be full on. “In my experience in the Arab world, I would say that North Africa and the Levant need organisation and more resources because they have got that thirst, while the Gulf region needs commitment and competitive mentality as the lifestyle in most of the countries is too easy-going for the kids and that eventually doesn’t help them be competitive in real life. That’s why we recruit in our Spanish Soccer Schools children at early ages – three years old are the youngest – so that we have time to shape and help them out with the challenges they might face.”

“I fight every day to pay football backby motivating children to chase their dreams and work hard to achieve.”

Salgado realises not all children will become professional football players, although such programmes are a great stepping stone; however, such initiatives allow many to at least pursue their education while playing football.

The du Football Champions initiative, which Salgado heads, scouts for hidden talent in the UAE with kids getting the opportunity to travel to Spain where they are trained by La Liga coaches. “La Liga is much more than Real Madrid and Barcelona. Our main target is the children. So this is a great way to bring La Liga to the Middle East – to help give kids a better opportunity to pursue a football career. I am very excited that I can use my experience playing around the world to help promote football to regional fans and bring more initiatives to this part of the world.” 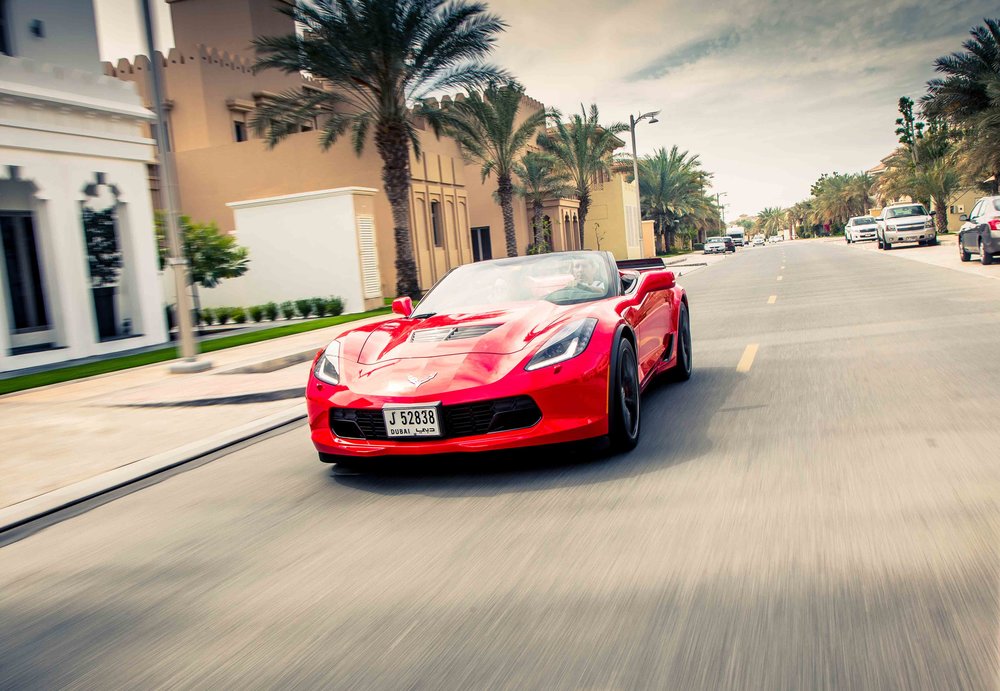 Salgado realises that football faces major hurdles in the region with much greater efforts needed to promote the sport. “This is an exciting time for football for the Middle East. The World Cup is coming to Qatar, and that will be a turning point, a well-deserved world-class event for the Arab world. I know people of the Middle East love football, but they have got a problem. They love to watch Barcelona, Real Madrid, Manchester United, Spain, England and Italy, rather than watching their own teams and their own players. We need to change that mentality. I think they have to open their eyes and try to support their local and national football a little bit more. More importantly, the local football academies lack professionalism and organisation. They are seen as social clubs, and not as a way to educate children through football values or to develop professional football players
with the right mentality to compete,”
he asserts. 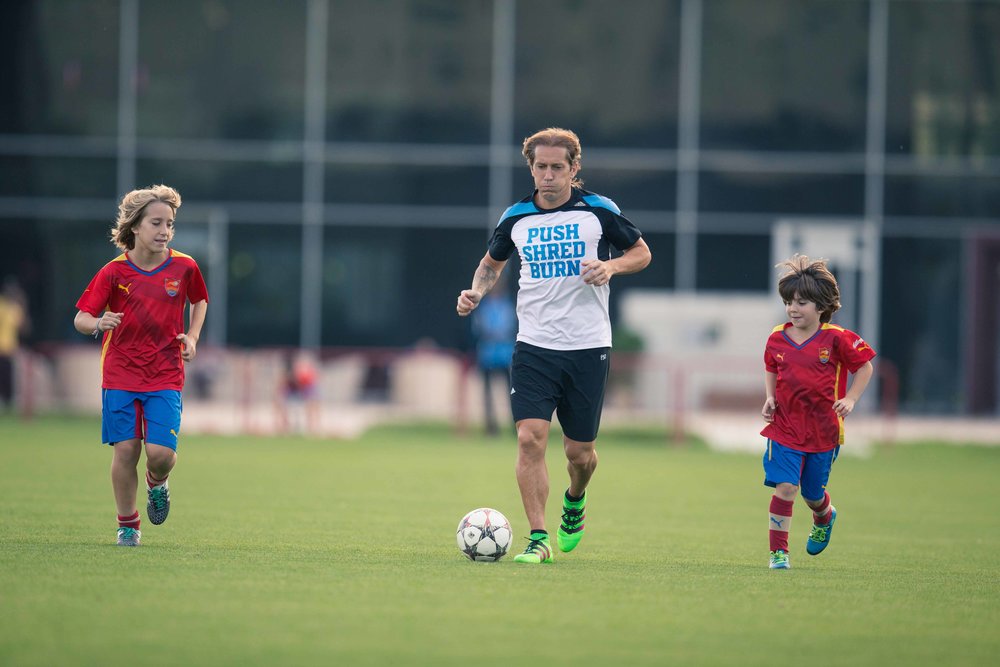 Throughout his career, Salgado represented the Spanish national team, competed in over 300 La Liga games, and played in the 2006 FIFA World Cup and European Championship. He says he’s been very fortunate to have undertaken great achievements.

“My debut for Celta Vigo was indeed very memorable because it was when I truly realised I could be a professional football player. As a child, I would dream about this moment and it finally arrived. I remember when I first made the Spain national team in 1998; it was very special for me to represent my country. Winning the Champions League twice with Real Madrid in 2000 and 2002 were major highlights of my career,” he reminisces.

Salgado started playing football at the age of five for his neighbourhood team, and even participated in the city league competitions. “We would play against the Celta Vigo academy team, and we used to beat them. One time a Celta Vigo legend came and asked my father if I could join the club. I was 11 years old, and my father told him it was my decision. At 12, I joined Celta Vigo and started my football career. It was a dream come true.”

The Spanish footballer played with Celta Vigo for four years until his big break came with Real Madrid, when he signed with them in 1999. For the following decade, his football career soared with Real Madrid, while also representing the Spanish national
team winning the Euro under 21’s
and playing in the World Cup and European championships.

“I will always be grateful to football, it gave me everything and in my case it was a way out dodging drugs and bad things happening everyday around my neighbourhood and school. It was a really bad time and I watched so many friends failing to survive. That’s why I fight every single day to pay football back using my experience to help children out and to motivate them to chase their dreams and work hard to achieve.”

Today his lifestyle has changed from being an athlete to becoming a role model for kids and thousands aspiring to pursue their dreams. As a professional athlete, he understands the importance of setting a good example as a role model.

“Football players are role models for millions of children around the world; they want to be like us and that’s a motivation that we can’t underestimate. I was there before when I was a kid and when I look back I see my children reflected in me. This is why I focus so much of my time with the Dubai Sports City Football Academy helping the youth in the UAE. My idea is you can find a player everywhere, and it’s about giving them a chance and a path to chase their dreams,” he says.

Salgado is famous for having adopted an aggressive style on the field, being a very intelligent defender with competitive attitude – a role reflective of his personality.  “When I was playing for Real Madrid you had to fight for your place every single day, so I was always pushing myself forward, similar to what I do in real life. I have always strived to win, and more importantly, to win with style.”

Salgado recently partnered up with his wife to launch a charity organisation supporting disadvantaged football youth talents in Galicia region of Spain. “We’ve started small, keeping it personal and real with a view to expanding it eventually to play an important role in the lives of kids’ right across Spain,” he says.

In addition, Michel has supported Chevrolet and the One World Play Project by hosting training sessions for children. Last December, he helped donate 5,000 ultra-durable footballs to children living in disadvantaged areas in Jordan.

Since 2014, Salgado has been a brand ambassador for the automotive brand Chevrolet in the Middle East. “Chevrolet is synonymous with performance, sportsmanship, and integrity and I like that they are a strong supporter of youth sports. We both understand the key role that football can play in terms of the development of children and communities, and helping children get involved with sport teaches not only technical skills, but important values and life skills such as teamwork, leadership, passion, and dedication.” 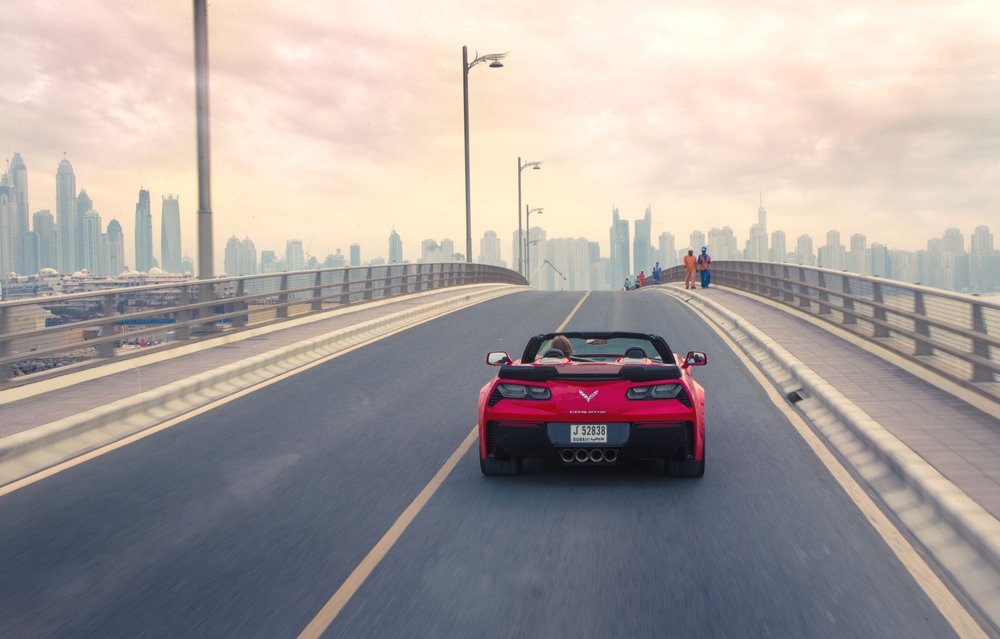 Some of Salgado’s favourite activities involve aquatic sports. Living in Dubai, the beach is one of his most enjoyable outings. “I enjoy being out in the sea catching waves on my surfboard. I feel free as I wait in the middle of the sea. Those of us who have been born by the sea know this feeling. I suppose that’s why I also enjoy sailing and I am the proud owner of a yacht called Tibu II.”

The word ‘tibu’ is short for tiburón, the Spanish word for ‘shark’, which is what his friends call him in his Spanish hometown, Vigo.

When he’s not reading one of his historical novels on ancient Rome or Greece – his favourite author is Valerio Massimo Manfredi (author of Alexander, Spartan and The Talisman of Troy) – he’s enjoying quality time with his family - either at home or while travelling to destinations around the world.

“As I’m involved in coaching right now and I’m learning, I spend good time studying football. It’s a great way to update yourself and to find your own style of coaching. Football is always evolving and you can’t get stuck in the past.

“Football is in my blood and I cannot imagine a time when it doesn’t play a major role in my life. Right now, I am focused on growing the football community in the Middle East and continue to extend my sporting media commitments. Professional coaching might come at certain point but I don’t want to rush, as I didn’t know that I was going to enjoy formation football that much and I do.

“Though, there is nothing I enjoy more than spending time with my wife and three children – those are precious times and the ones I enjoy the most. I look forward to travelling more with my family. We enjoy seeing new things and meeting different people – experiencing life and collecting memories that no-one can take away from us.”