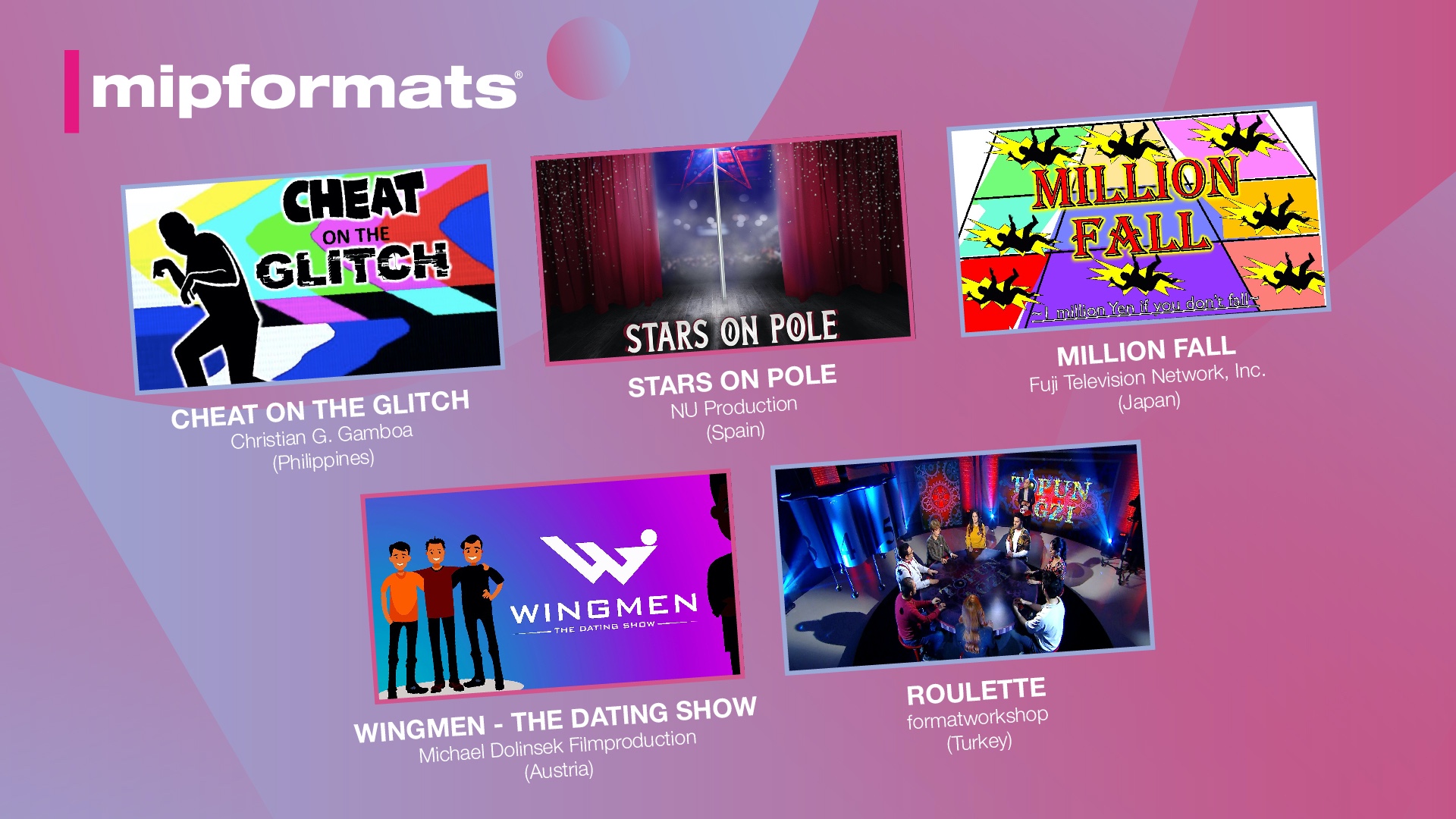 RX France (formerly Reed MIDEM) today announced the five shortlisted formats invited to present at 2022’s MIPFormats International Pitch final, staged for the first time with FOX Entertainment’s in-house unscripted studio, FOX Alternative Entertainment.
Now in its 12th year, the competition is again a highlight of the MIPFormats programme, this year brought into the heart of the main MIPTV schedule as part of the reshaped in person Spring International Television Market (4-6 April). In total, 67 projects were submitted for this year’s competition, originating from 27 countries.
The selected projects are Cheat On The Glitch (Christian G. Gamboa, Philippines); Million Fall (Fuji Television Network, Inc., Japan); Roulette (formatworkshop, Turkey); Stars On Pole (NU Production, Spain) and Wingmen – The Dating Game (Michael Dolinsek Film Production, Austria).
The short list of five finalists will pitch their formats on stage on the second day of the market in the world-renowned Palais des Festivals to a jury chaired by Executive VP, Head of FOX Alternative Entertainment Allison Wallach, alongside Natalie Wogue (Consultant, International Format Strategist FOX Alternative Entertainment) and Yasmin Rawji, (Senior VP, Alternative Entertainment, FOX Entertainment).
In addition to a prize of US$5000 for development, the winning format will be pitched to global buyers by FOX Alternative Entertainment as part of FOX’s $US100 million International Unscripted Format Fund. Original unscripted entertainment formats, as yet not commissioned, broadcast or exhibited, and for which worldwide rights are available were eligible for entry.
“The many concepts and ideas submitted to this year’s MIPFormats International Pitch were beyond impressive,” said Allison Wallach. “It’s great to see so much creativity and passion in these pitches and selecting our five finalists proved to be an incredible exercise.  I’m excited to join them on stage in Cannes to learn more about each project and the opportunity they may have on a much larger scale.”
RX France Entertainment Division Director & Director of MIPTV Lucy Smith comments: “It’s wonderful to see such creative concepts from a broad diversity of countries in the shortlist. The spectacle of seeing these pitched publicly will again be unmissable and I wish them all the very best of luck.”
The new-look annual MIPTV International Spring TV Market this year sees MIPDoc also brought into the heart of the main programme, with premium high-end drama showcase MIPDrama again acting as a curtain raiser on 3 April. Cannes will also play host to the fifth season of international TV series Festival CANNESERIES (1-6 April).
Distributors, studios, buyers, and producers, spanning more than 50 countries have, to date, confirmed their presence at the Market, these include, to date, over 140 companies set to exhibit within a reshaped layout in the Palais des Festivals.
Share

Get your art fix as Inloco heads to Dubai