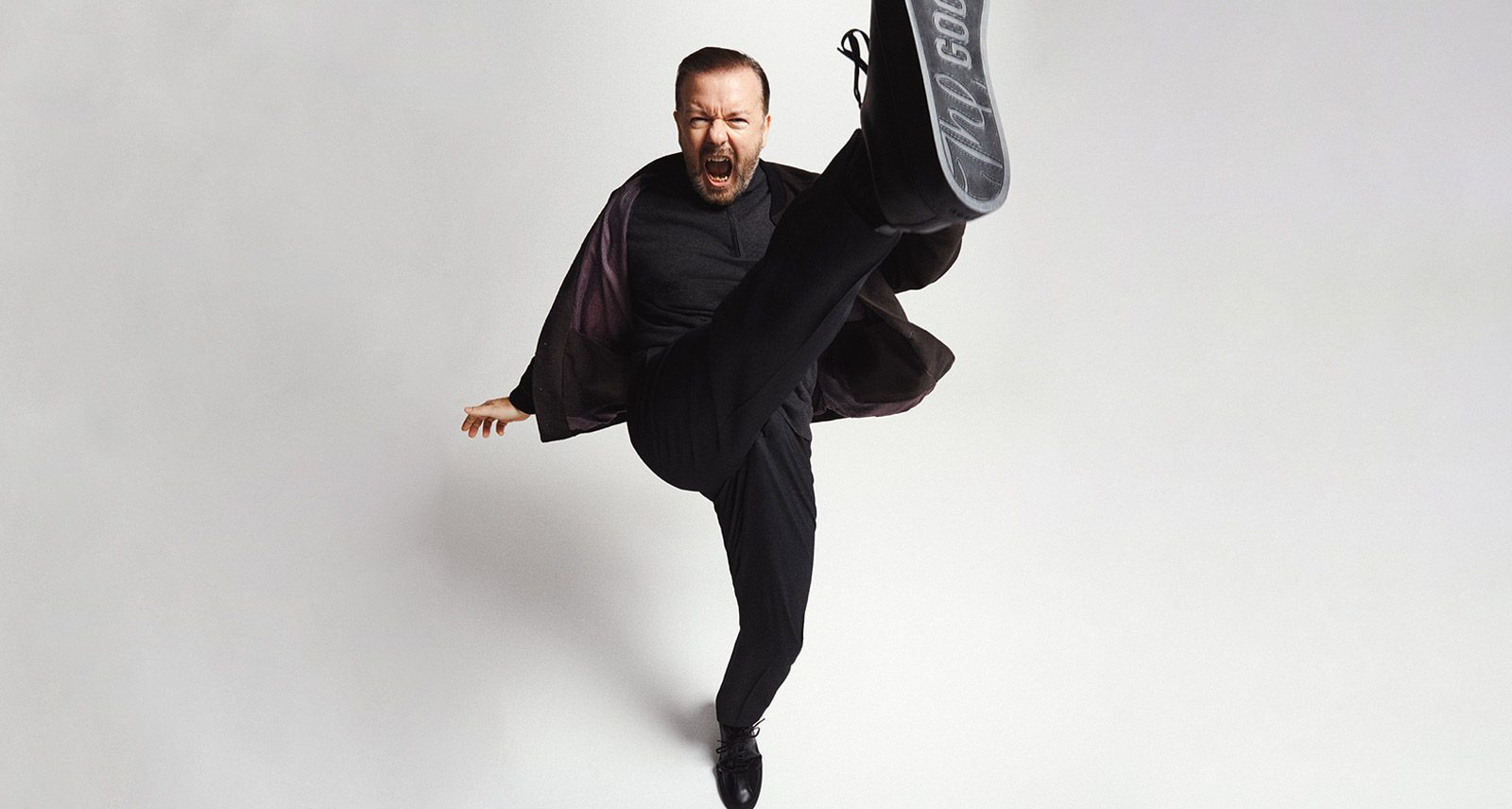 In his latest sitcom, After Life, Gervais stars as Tony Johnson, a suicidal widower living in the fictional British hamlet of Tambury. His wife recently deceased, Tony has been drained of all vim and vigour. A shade of his former self, he slugs to work at the local newspaper, he walks the dog, he snipes at dolts and do-gooders, quarrels with the postman, feigns some social niceties, and glugs cold soup out of the can. But all he really yearns for, as he makes abundantly clear to anyone who bothers to ask, is the chilly embrace of death. Without the love of his life-partner, Tony just doesn’t see much of a point. As Gervais, the 59-year-old Emmy-winning British comic, explains from his home in London: “The central theme of it is: if you lose everything, is life worth living?” It was a bit of left-field inspiration for Gervais. His previous sitcoms—including Netflix’s Derek, BBC/HBO’s Extras, and the seminal BBC Two mockumentary The Office, in which he starred as the hapless, toady, desperate-to-be-liked David Brent—were broadly character-based. “Usually the character I play comes first,” Gervais says. “Brent existed before The Office, Derek existed before Derek, et cetera. Here the concept came first. And I had to think of the character later.” With After Life, Gervais wanted to work through that grand philosophical problem: how do we make meaning in a world that seems increasingly bereft of it?

When we first meet Tony, he’s a bit of a pill. Dressed in faded black-on-black and generally mean to anyone around him, Tony’s detachment from life offers a kind of freedom. As Gervais explains it, Tony regards taking his own life as a kind of “superpower.” It entitles him, in his mind anyway, to be a prick: a keenly rude sad sack who coasts on the sympathy of others. “If you lost everything, and were going to kill yourself, but you didn’t for some reason, you’d know you could always fall back on that. If you didn’t fear anything, because you can always opt out at any point. You can say and do what you wanted. And if it all got too much you could kill yourself.”

As After Life has developed over the course of two seasons (Gervais is currently using the downtime afforded by the ongoing coronavirus pandemic to work on a third), Tony has changed a bit. Inspired by the kindness of people around him, he softens. Gervais knows that it’s a fine line to tread as he works on the new batch of episodes. Part of Tony’s appeal is his tell-it-like-it-is frankness. Make him too happy and the show’s premise evaporates. He has to develop the character without sacrificing him entirely. “I remember a famous story about a focus group for Rain Man,” he says, barely suppressing his trademark manic giggle. “And one of the comments was, ‘I was hoping the little guy would snap out of it by the end.’” (He explodes in a fit of laughter.) “I’m not going to give people a happy ending. You don’t snap out of it.”

There’s plenty of buzz around “cancel culture”—a form of censorious shaming that sees individuals or organizations subjected to boycotts, especially online. Countless editorials have offered explainers, making sense of the term. Gervais has himself attracted plenty of ire for his own perceived offensiveness, whether it be for his impolitic tweets or for lambasting political correctness from his podium as frequent host of the Golden Globes. “Twenty, thirty years ago, when I was growing up,” Gervais recalls, “the authoritarian gatekeepers of taste and decency were Christians, conservatives, middled-aged…you know, ‘Get off my lawn! You can’t say that!’ Now it’s young, radical leftists who think they can’t hear certain things in colleges. It’s bizarre. It’s really bizarre. And everyone thinks they’re right. That’s the problem.”

As Gervais sees it, social media sites like Twitter and traditional media play a joint role in ginning up hysteria and censoriousness. “People now go through your tweets and see what tweets you’ve liked, or what tweets you haven’t liked. Some people will say, ‘I notice you haven’t tweeted about something…’ Well, there’s an infinite number of things I haven’t tweeted about. It’s trying to own you. It’s really strange. And everything’s amplified and blown up. And now the media picks up on it. There’s this terrible thing the media do, this clickbait nonsense. ‘So and so said a thing and people are furious!’ No they’re not. No one’s furious. 0.0001% are furious and that’s the tweet you use to try and get a headline out of it. It’s nonsense.”

“That’s the biggest superpower: The fact that we all have the ability to say what we want. But we don’t.”

For his part, Gervais sees some nuance in the conversation. He knows that people should face consequences, that, “if someone behaves in a way you don’t like, you don’t have to watch their shows or buy their records, and you’re allowed to burn their DVDs.” There’s a difference between facing those consequences (in the form of lost revenue resulting from a public backlash) and actually having free speech impinged by government censure. “That’s what free speech is,” he says. “the government can’t arrest you or prosecute you for giving your opinion.” Here, After Life’s own conception of cancel culture and consequences proves edifying. While Gervais admits that the viewer may live vicariously through the sharp-tongued Tony, the character only grows when facing consequences. He’s self-aware enough to see how his boorish behaviour hurts people around him, and willing to learn from those mistakes. He is, if nothing else, a work in progress.

Gervais, too, seems to be developing, or even soothing. Where the subject matter of a show like After Life is wilfully alienating—as he conceived it: “I could imagine people turning that on and saying, ‘Why are we watching this?!’”—there’s a genuine heart to it. Gervais’ massively influential breakout, The Office, was flinty, incisive, desperately bleak art: a mix between HBO’s The Larry Sanders Show and the kitchen sink social dramas of English filmmakers like Mike Leigh and Ken Loach. It had little truck for schmaltz and sentimentality. After Life, for all its jokes about ostensibly taboo subjects like suicide and heroin overdose and pedophilia, abounds with heart. It’s essentially a showcase for the myriad ways in which people can take care of one another, even in the direst circumstances.

Gervais himself is responding to the current dire circumstances by keeping himself busy. His fall stand-up tour, called Supernature, has been postponed. So he spends his days writing After Life. He’s careful not to whinge about his situation, especially in light of peril facing frontline workers during the pandemic. “I‘m an old fashioned champagne socialist,” he confesses, with usual candour. While Netflix has bought Supernature, with plans to air it as a special, Gervais isn’t content to film it before a crew in an empty, black box studio. “I don’t want to just put it out for the sake of having a special on Netflix,” he says. “I’m a touring stand-up comedian, and I want to tour it to people around the world.”

Until a touring itinerary becomes feasible, he’s entertaining himself by working out material. While he claims he tries to rise above the usual fray of social media, he admits to indulging himself by asking Twitter which topics he shouldn’t joke about on his new tour—precisely so he can decide what buttons to push. “People answer me seriously! And every answer they give is hilarious! The pomposity! That they think they know the subjects you can never joke about! I could just read the list and it would be funny…One was ‘losing two children!’”

He laughs that tittering, breathless, utterly unmistakable Ricky Gervais laugh, bowled over by the prospect of cracking wise about death. He has no qualms about making those kinds of jokes, so long as they’re good, funny jokes. “That’s what humour’s for,” he waxes, a bit philosophically, “to get us over the bad things.”

SHOT ON LOCATION AT SPRING STUDIOS IN LONDON, UK.