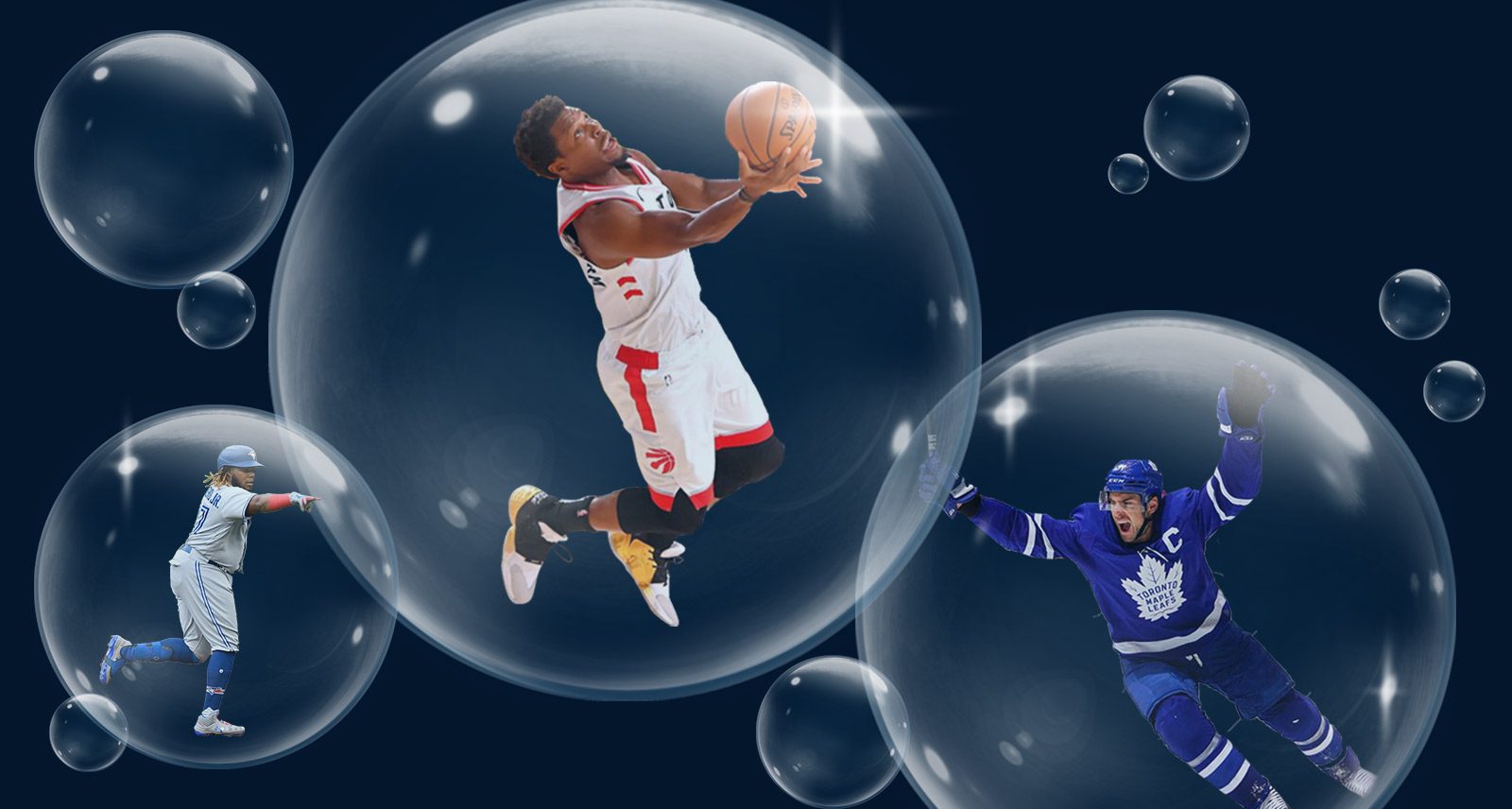 When it comes to professional sport, the maxims dictate that there are to be no half measures: players must give 110%, leave everything on the field, win or go home…you get the idea. Which is perhaps why, with the wonky, rejigged-for-the-pandemic return of North American Pro Sports, longtime fans might be feeling a little uneasy about flocking back to watch their favourite team hobble to glory.

After a gruelling four month absence of water cooler talk, we suddenly find ourselves with a gluttony of options. Hockey, basketball, football (both kinds!) and baseball have all been reconceived and reworked to offer edge-of-your-seat excitement while trying to minimize player exposure. It isn’t exactly business as usual. Leagues are experimenting with multi-team bubbles, reduced travel, fewer venues, no fans, shorter seasons — all of which should lead to some unexpectedly exciting television viewing and likely unpredictable results. Plus, with this new summer season, leagues that never overlapped before are vying for primetime TV. So if you’re wondering just what all this means and how to make the most of it, we’ve prepared a short primer. The National Hockey League was well into its 2019-2020 season when fears around COVID19 halted play on March 12. Nearly five months later, the league has returned with what it dubs the “Return to Play” tournament, with two hub cities (Toronto and Edmonton) playing host to a new playoff format.

Effectively scrapping the remainder of the regular season, the Stanley Cup playoffs have begun with the top four seeds in each conference getting a bye, while the next eight seeds play in a best-of-five series.

The biggest name sitting out the restart is Edmonton Oilers defenseman Mike Green. Others not in the bubble include former Maple Leaf tough guy Roman Polak and Boston forward Steven Kampfer.

Hockey in the summer! Plus, there’s lots to love for Canadian teams right off the bat. With the new playoff format avoiding end of season seed strategizing, unlikely pairings have provided for exciting possibilities. The series between the Calgary Flames and Winnipeg Jets is sure to bring fast-paced action,  whilst Montreal and Vancouver have been given a second chance at otherwise meandering seasons. Meanwhile Toronto and Edmonton face unlikely foes, making for unpredictable — if less than exhilarating — series. Given the nature of super-teams, the National Basketball Association had nearly all their key playoff rivalries mapped out by the time Utah Jazz player Rudy Gilbert tested positive for COVID19 in March, effectively halting play in all major sports leagues.

After much hand-wringing, the NBA has resumed with a (mostly) tight bubble at Disney’s Wide World of Sports complex in the heart of COVID hotspot Florida. The new format means all teams that were in the playoff hunt before the shutdown — the top nine teams from the Eastern Conference and the top 13 teams from the Western Conference — will play a short seeding round before continuing into the playoffs.

Multiple big name players have decided to stay outside the bubble, including the Trail Blazers’ Trevor Ariza and Brooklyn Nets stars Wilson Chandler and DeAndre Jordan.

The Raptors! The team that, despite being the defending champions, remain the Rodney Dangerfield of professional basketball. With all the teams playing in the same complex, the Raps’ will finally have a national American showcase that won’t involve former players complaining they can’t get on ESPN. Major League Baseball, a socially distanced sport if there ever was one, decided home-field advantage was too powerful a force to mess with and let the teams play as they would, minus fans. (The Canadian government felt otherwise, so the Blue Jays will be playing home games in Buffalo.) The delayed season means a shortened schedule of only 60 games and an expanded 16-team playoff tournament.

Not many, and the ones that were put in place have been, somewhat predictably, less than successful. The MLB’s COVID response is akin to Sweden’s — and we all saw how that went.

Being that they’re not in a bubble, the MLB has a long list of players not swimming but certainly missing the 2020 season, including LA Dodgers ace David Price, Atlanta Braves stars Felix Hernandez and Nick Markakis, SF Giants’ Buster Posey and the Washington Nationals’ Ryan Zimmerman.

Considering both the shortened season, hobbled line-ups and expanded playoff format, the young and promising Blue Jays may actually have a chance to make the playoffs. Following in the footsteps of their European counterparts, Major League Soccer has attempted a return to play, however not so much with a regular season as a short World Cup-esque tournament dubbed “MLS is Back.” With many players and entire teams bowing out due to COVID, the return has been considerably underwhelming. Especially for Toronto FC who were knocked out in the Round of 16 by a considerably more hungry though less talented NYC FC.

As of writing, the NFL will not be bubbling, meaning they’re following in the footsteps of the MLB. The season is currently set to begin in September and there’s still much to be decided until then including whether fans will be allowed to watch in the arenas. Let’s but them at a TBD for now because who the hell knows if there will even be a September at this point.

Considering racing is done alone and in a car, both NASCAR and Formula 1 have managed to mostly avoid any issues in kicking off their seasons. Instead, at least for NASCAR, the emerging social justice and equity movement has been the battleground, thanks to lone racer of colour Bubba Watson becoming a leading voice in demanding important changes to the sport.

Also, the PGA and LPGA returned without fans, but if you get your kicks watching golf on TV that shouldn’t really bother you. And the ATP is set to return without Wimbledon or fans. The U.S. Open in late August should make for fun watching, if only to clearly hear all the players swear at the refs.