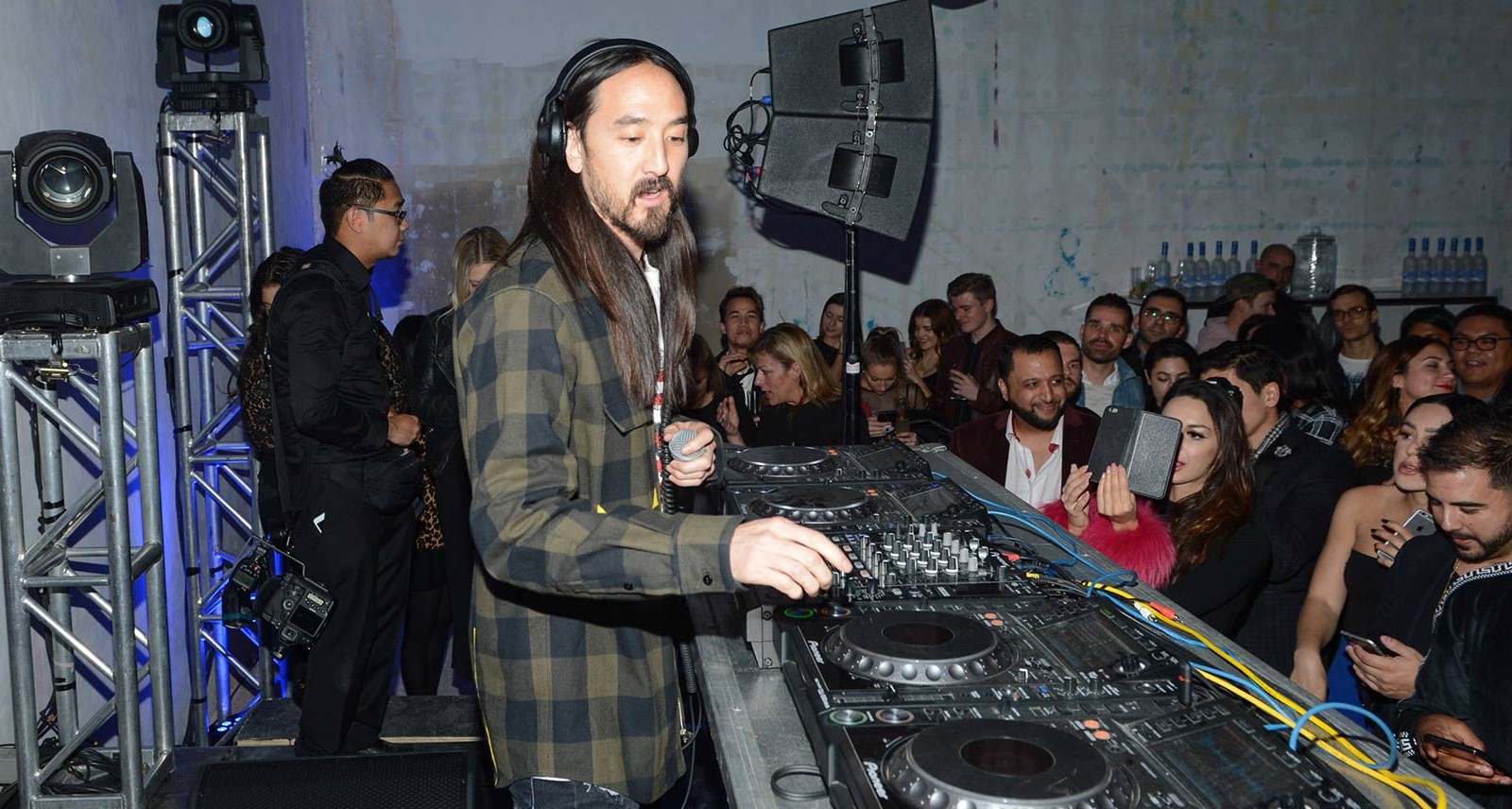 Scroll through Steve Aoki’s Instagram feed and you’ll find many photos of the Grammy-nominated DJ shirtless and/or covered in cake. So his sartorial aspirations may not be readily apparent to you. That is, unless you live in Japan, where his Dim Mak Collection men’s streetwear line — a splinter of his Dim Mak punk/indie/EDM record label — has been a real-deal hit for the past few years. Last year, he finally brought his punk- and skater culture-inspired collection to North America, launching it at Saks Fifth Avenue.

Dim Mak’s latest season was influenced by writer-artist-junkie William S. Burroughs, as well as the impact the Beat Generation had on the ’70s punk era in New York. Selections range from long-sleeve tees with surrealist graphics by artist David Choe ($95) to ’90s-esque, camo-flecked oversized reversible bombers ($800).

We asked Aoki about streetwear, the inherent contraction in starting a punk fashion line, and why he works so damn hard. 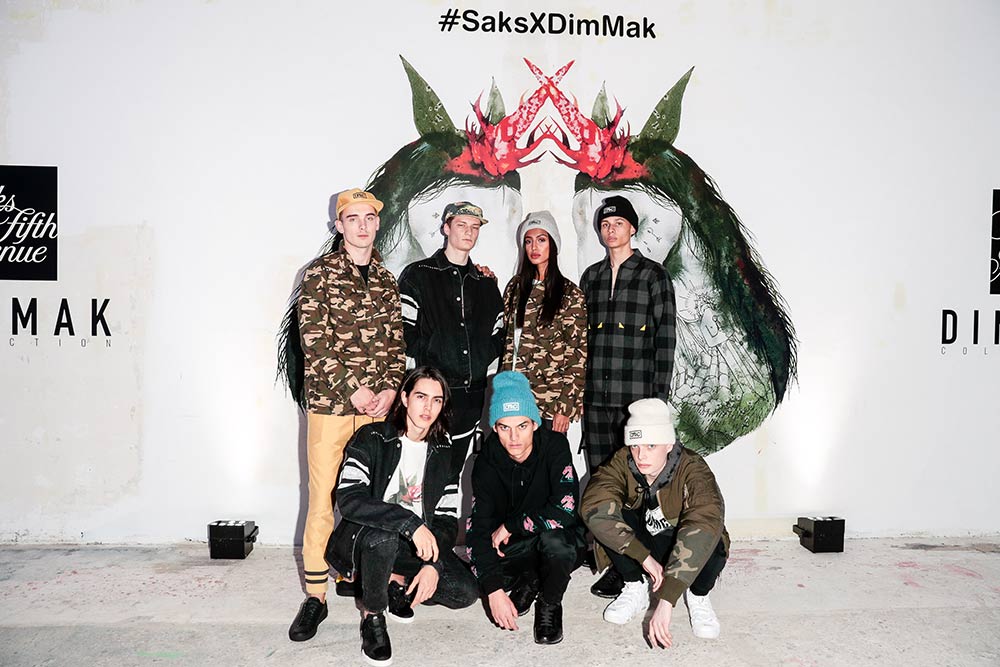 What can you tell me about the Dim Mak? What’s the philosophy behind it?

Dim Mak, the brand itself, has been around since 1996, so since I was a college student. Essentially it was just a way to help my friends put out their music — that’s how it started. The slogan for Dim Mak is “By any means necessary,” which is essentially like, “We will always strive and get to the finish line no matter what.” From day one I was making Dim Mak t-shirts, but it wasn’t fashion, it was merch. So when you do that for 10 years and travel around the world, and become more versed in the fashion world, and want to find a way into that world — I’ve always had that aspiration to become a designer and to build Dim Mak into a fashion label. But that hurdle is so high, the gateway entry into fashion is ridiculously high, so it took time. It wasn’t easy, but we finally got there 15 years after I started the brand. It took that much time, really, because it’s not only expensive, but it’s a completely different wheelhouse; you have to have a whole new team, a whole new structure, and you have to have the knowledge to be able to go in there and do it right. So we built the team out; we started in Japan and I was schooled by all the amazing Japanese designers out there. Japanese design is my favourite design, it’s definitely part of my blueprint in fashion, so it’s always going to be part of the thread in every collection. And I’m always going to go to my roots, whatever feels natural to me, so I take the punk and hardcore concepts and elevate that and then incorporate it into each collection, elements and ideas from that, and then finally take it in-house.

How do you see Dim Mak fitting into North America’s current fashion landscape?

Well, we started in Japan — I was going out there like a student — but we finally moved in 2017 to America, when we did our CFDA show. The way I thought about fashion was, ‘I’m not going to work in the rulebook of what I think fashion is, because then Dim Mak’s just going to be in the middle. We’re just going to do it our own way inside their world, and I’ll make noise like I made noise in music.’ So we turned the runway into a skate ramp, we fitted and styled all the skaters as our models, and that was our intro into the fashion world — it was more than we expected in terms of news coverage and people talking about it. Then we took over a block in New York for our spring collection, and that was another dream come true — to do a live fashion show on the streets of New York. That was fucking amazing. Our next frontier, which is very, very important, is launching in Canada, with the right partner — a partner that really believes in our vision — and Saks were by far one of the biggest outlets that were like, “We believe in what you do, we totally get it, and we want to support you.” Those are the kinds of people that we’re excited to work with.

So you were saying that it’s punk inspired. I read your latest collection was also inspired by the Beat Generation’s influence on early ’70s punk.

Yeah, so this collection in particular, Fall/Winter, is inspired by the Beat Generation. We went back to our roots, and then went back to the inspiration of those roots, because the inspiration for those roots were from the ’50s and ’60s with William S. Burroughs and the Beat Generation. So we took a lot of stylized concepts from what the beatniks were wearing, and some of the quotes from William S. Burroughs, and then teamed up with David Choe to add that 2017 cross-collaborative approach to it, and put his graphics all over the Beat Generation inspired collection, and then you have the Dim Mak Fall/Winter 2017-18 collection. 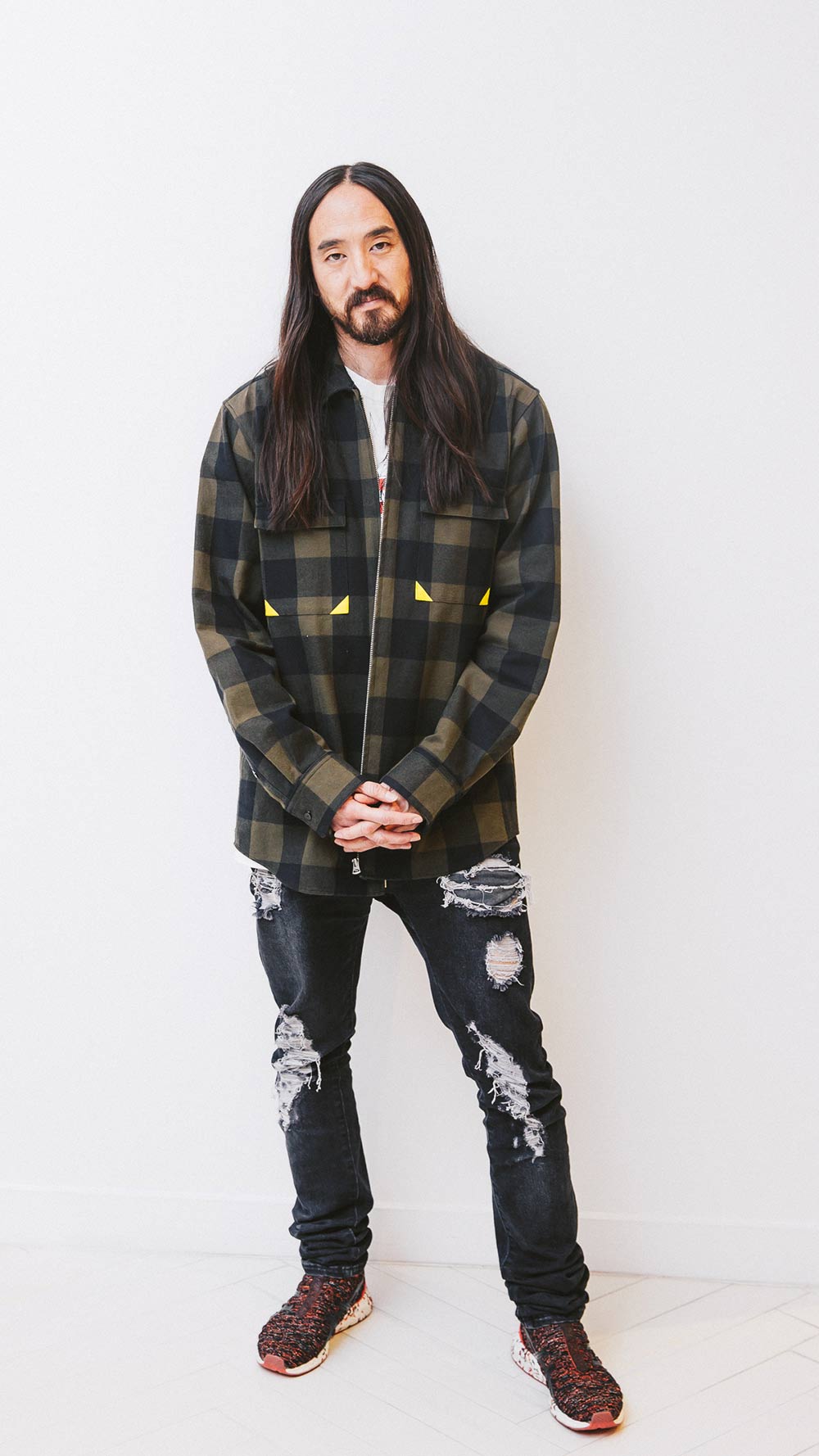 But I bet a lot of people who consider themselves punk would balk at a fashion line. They’d say, “That’s not punk.”

I think it’s punk. I think it’s really punk to have your own fashion line. I think at the end of the day, the most punk thing you can do is create your own destiny; the most punk thing you can do is take the power into your own hands and do it yourself. That’s the same kind of ethos and philosophy of why I got into punk and hardcore, it’s that same DIY attitude. DIY isn’t just about do-it-yourself, it’s about this idea that you can create your own destiny — whatever you want, you can get there. It might not be as glamorous as the billionaires and millionaires that made it, you might not have that castle that the billionaire made, but you’ll have your own castle and your own way with your own tools and your own way of making it, and that’s your castle. So, to me, this is my castle. Whatever I make, I have so much pride in what I do, and there’s a certain community that really supports that, and so it doesn’t matter because fashion is all relative, anyways. So if you’re like “I don’t really like punk,” then it’s like, well, it’s not for you! That’s what’s so amazing about fashion: it’s your creative attitude and you put it in a product, and then, at the end of the day, fashion is an identifier for you. When you wear Dim Mak, you’re part of the club — the people that buy the clothes, they’re like part of our club. It doesn’t matter if I know them personally.

Yeah, fair enough. You mentioned earlier that the barrier of entry is so high for fashion. Even Kanye was saying that when he was trying to get his start in fashion. Why do you think that is?

It’s really, really expensive, and most people don’t have that kind of capital to do it. I’m risking a lot, for me. Fashion is such a big deal in my life, it’s such a big inspirational passion project for me that I’m spending a lot of money just to make sure that I’m represented in my own way, that my voice through garments is represented. I care so much about that that it’s not about the bottom line. I don’t care about the profit margins. I don’t have a stockholder meeting where I’m like “Alright guys, don’t worry, we’re going to make this.” Like, I don’t give a fuck about the profits. All I care about is making each collection exactly what I want it to be, and have that power to do that, and luckily I have the capital because I made my own money through music. So I feel empowered — that is the most punk thing I could possibly feel. It’s like I’m empowered to do my own shit and no one can tell me otherwise. That is fuckin’ as punk as you get, and we’re working with one of the biggest outlets in America, Saks, that believes in us. So I’m sitting on the top of the fuckin’ world right now.

Would you say your clothes are meant to look good drenched in cake and champagne?

The Dim Mak clothes, the way I see it, it’s meant for other artists, other musicians, other producers rocking these clothes. This isn’t for, like, festival wear. You wear your $20 t-shirt when I get cake on you. This is for me, really, and for my friends, and for the fans that save up for the entire month to buy that jacket, or the jacket and sweater. It’s a special, very exclusive piece of material. It’s very difficult to get — we don’t make that many pieces — so it’s not really meant for your rave. I mean, you wear it however way you want to wear it, and in all honesty, I road test the shit out of my clothes. So [in terms of] durability, this thing can withstand whatever. I’m the best road tester, because I’m, like, the hardest working dude on the planet. I tour all over the world, I sleep on airport floors, I’ll sleep in the middle of a plane, I don’t care, and I’m wearing my high-end clothes, and I come off and I’m still looking fresh. So if you want to get caked wearing your Dim Mak, go for it, but it’s really exclusive, and it’s very limited, and you can only get it in a few places, and that’s kind of the whole point of the collection.

Getting caked in it would be a punk thing to do…

Yeah, yeah! Leave the cake on there; don’t wash it off. Just leave it on there.

Well, it’s true that you’re the one of hardest-working motherfuckers in music. You’ve broken records for playing the most shows in a year, and now you have your fashion line, you’re doing all this shit all the time. Why do you work so hard?

I’m always inspired, man. I’m always inspired, and you’ve only got — well, I hope I become a robot — but you’ve only got one life! So if I don’t become a robot and live indefinitely, then I have to do everything that moves me, I have to follow my gut, and luckily, in this case, I’ve had the money to develop a fashion line, something that I love so much. Fashion is, to me, just as emotionally gratifying as making a song. The new collection is just as emotionally gratifying as making a song. It means a lot to me. I approach fashion the same way I approach music — it’s not about how many records I sell. In this case, it’s different because we don’t produce that much. We only produce enough that the people that wear it feel special that they got it because it’s like a very exclusive club.

And music and fashion, I feel, have always been on the same continuum.

Yeah, music and fashion are connected. The biggest music stars are fashion stars and fashion icons. It’s like we identify by culture — culture is the signifier of all different things. It’s not just music; it’s what you wear, what you listen to, the friends you hang out with, all that. That’s all part of it, and it’s always been something I’ve thought about.

7 Show-Stopping Looks to Cop Right Now, as Worn by the Stars of Cirque du Soleil's ‘Volta’

You don't have to be a Brit to admire Chaps & Co.

2017’s Most Coveted Retro Sneakers Are Dropping This Saturday