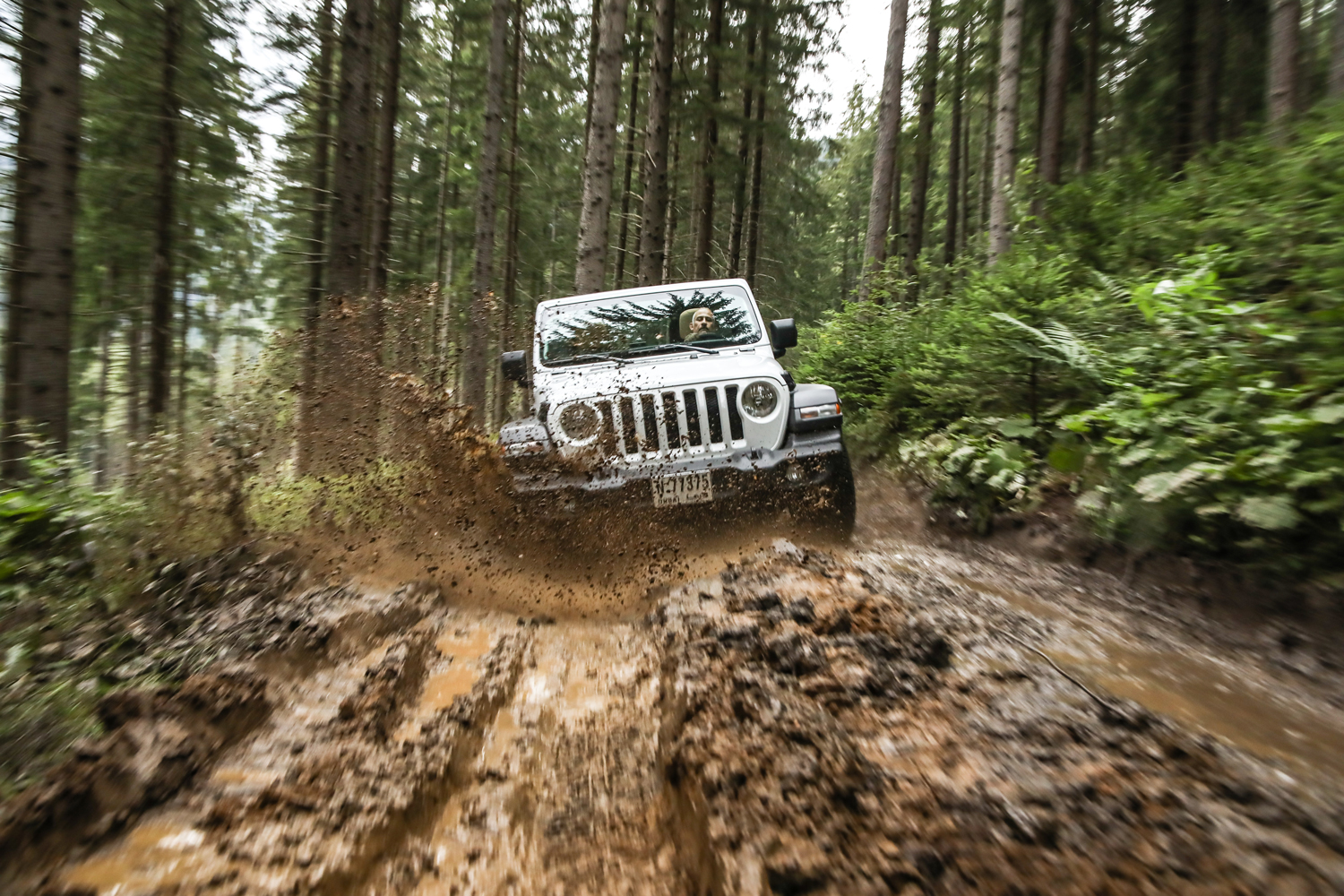 If you’re a Jeep person, you probably don’t need to read this because, even if I wanted to dissuade you (I do not) of your uncompromising love for this uncompromising vehicle, to attempt to do so would be futile. Such is the relationship that this exceedingly macho ride inspires in its not-necessarily-macho fan base. I say that because, while I generally abhor the idea of cars appealing exclusively to one gender or the other, I have to admit that the sort of ladies who love Wrangler, and there are plenty, are of the more iconoclastic variety. Some people want the Jeep cred, without the Wild West ride quality, and for them there’s the Grand Cherokee, a fine SUV in its own right. But if you’re more hard core, and only have eyes for that tough looking 4x4 you first spotted as a kid watching MASH, then the Wrangler is the end all be all of Jeep, and there’s not a thing wrong with that. 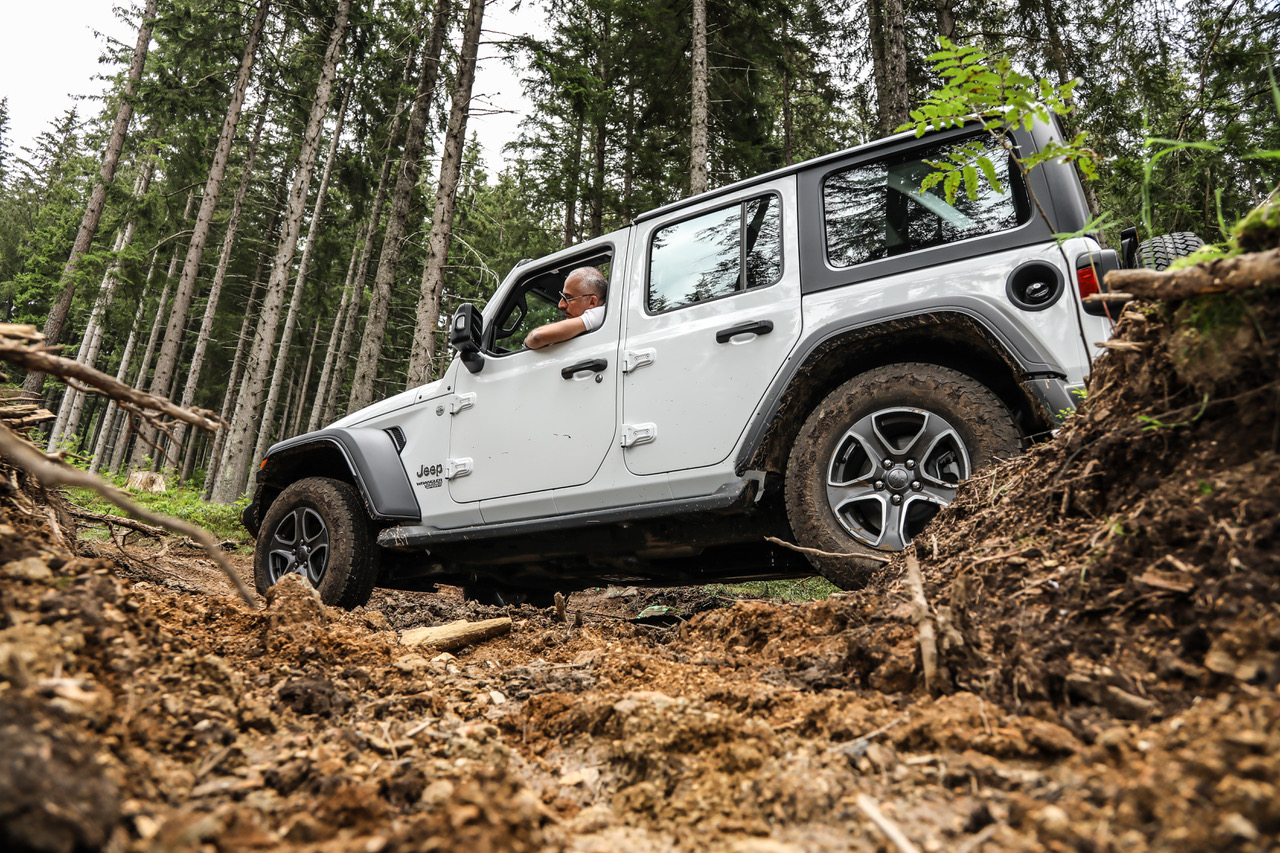 A lot has changed since Hawkeye and Trapper John first teamed up, and as much as Wrangler has changed, it’s also been at pains to stay the same, rocking exposed hinges, removable doors, hood latches, and of course, that iconic façade. You know what else hasn’t changed: Jeep’s spectacular ability off the beaten path. And thus Jeep Wrangler is perhaps the most recognized vehicle in the world, delivering excellent off-road capability that draws upon around eight decades of 4x4 engineering experience. For 2019 Jeep has bestowed the Wrangler with an Advanced Safety Group package that now includes adaptive cruise control and forward collision warning. They’ve also added bikini exterior paint color joins the Wrangler lineup— ooh la la.

On some level, Jeep’s are about power. Not straight line acceleration, but the power required to go where 99% of the competition cannot. Powertrain options include a 3.6-liter Pentastar V-6 and an all-new 2.0-liter turbocharged inline four-cylinder engine. Wrangler continues to offer a body-on-frame design, front and rear five-link suspension system, solid axles, electronic lockers and is one of the few midsize SUVs that offer a six-speed manual transmission in addition to its available eight-speed automatic. 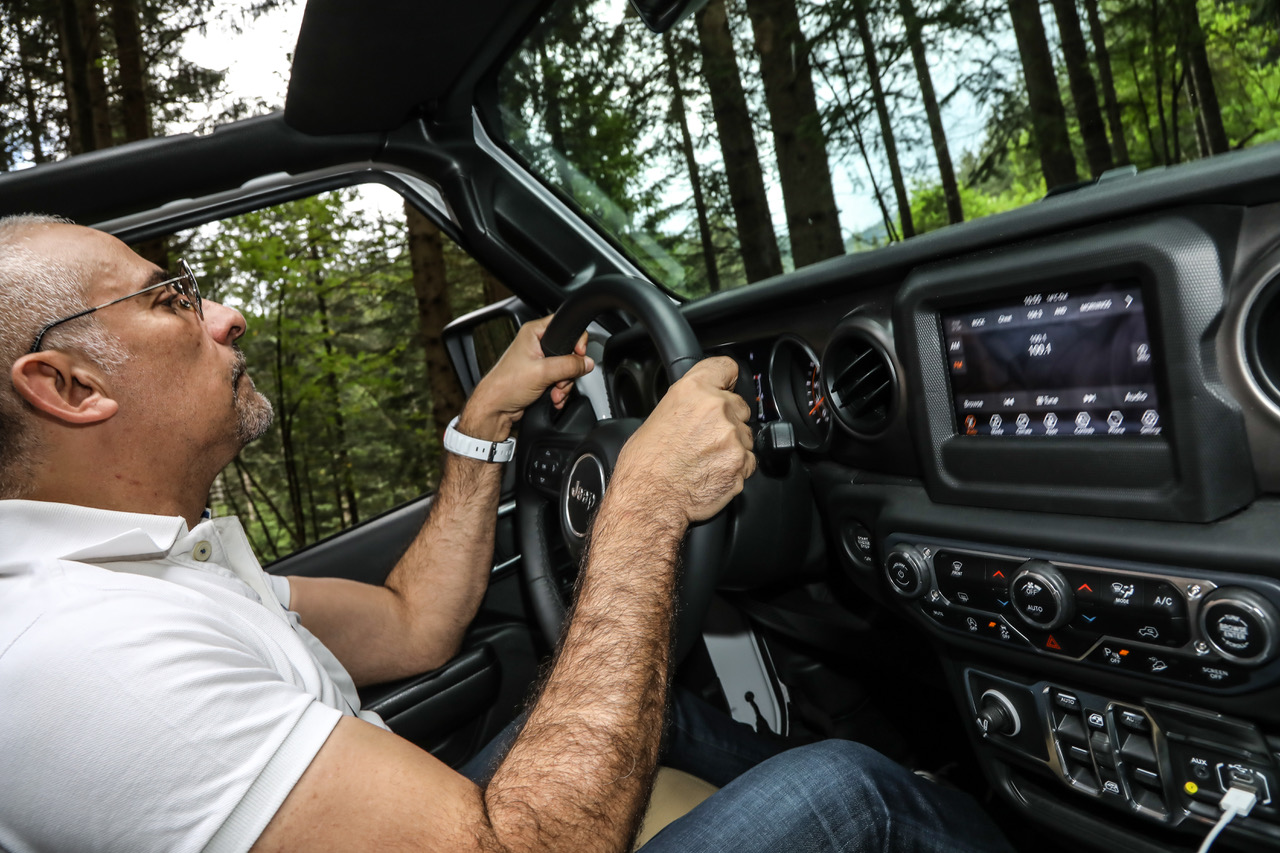 Propelling our test model is Jeep’s sturdy 3.6-liter Pentastar engine, which is constructed with a high-pressure, die-cast aluminum block fitted with cast-iron bore liners and aluminum cylinder heads, and designed to meet all known future worldwide emission standards. The Pentastar produces 285 hp, and combines with the new automatic transmission to deliver 260 lb.-ft. of torque and is engineered to provide a broad torque band. The available 2.0-liter turbocharged inline four-cylinder engine with eTorque technology delivers 270 horsepower and 295 lb.-ft. of torque.

Along with its excellent powertrain, Jeep engineers have improved ride and sound characteristics of the Wrangler’s body-on-frame design (American car classicists emit sighs of pleasure whenever you work in the term body-on-frame). Over time, the iconic Wrangler has received upgraded motor and transmission adaptations and revised suspension calibrations contribute to overall improvements over previous models that make the Wrangler a tad more civilized at highway speed. Sure, it’s not everyone’s idea of a daily driver, but off road fanatics will surely enjoy this new level of (relative) refinement. I say relative, because Jeeps hearty aesthetic is brashly and unapologetically American compared to, a somewhat random example, the new PG Tips equipped LR4. 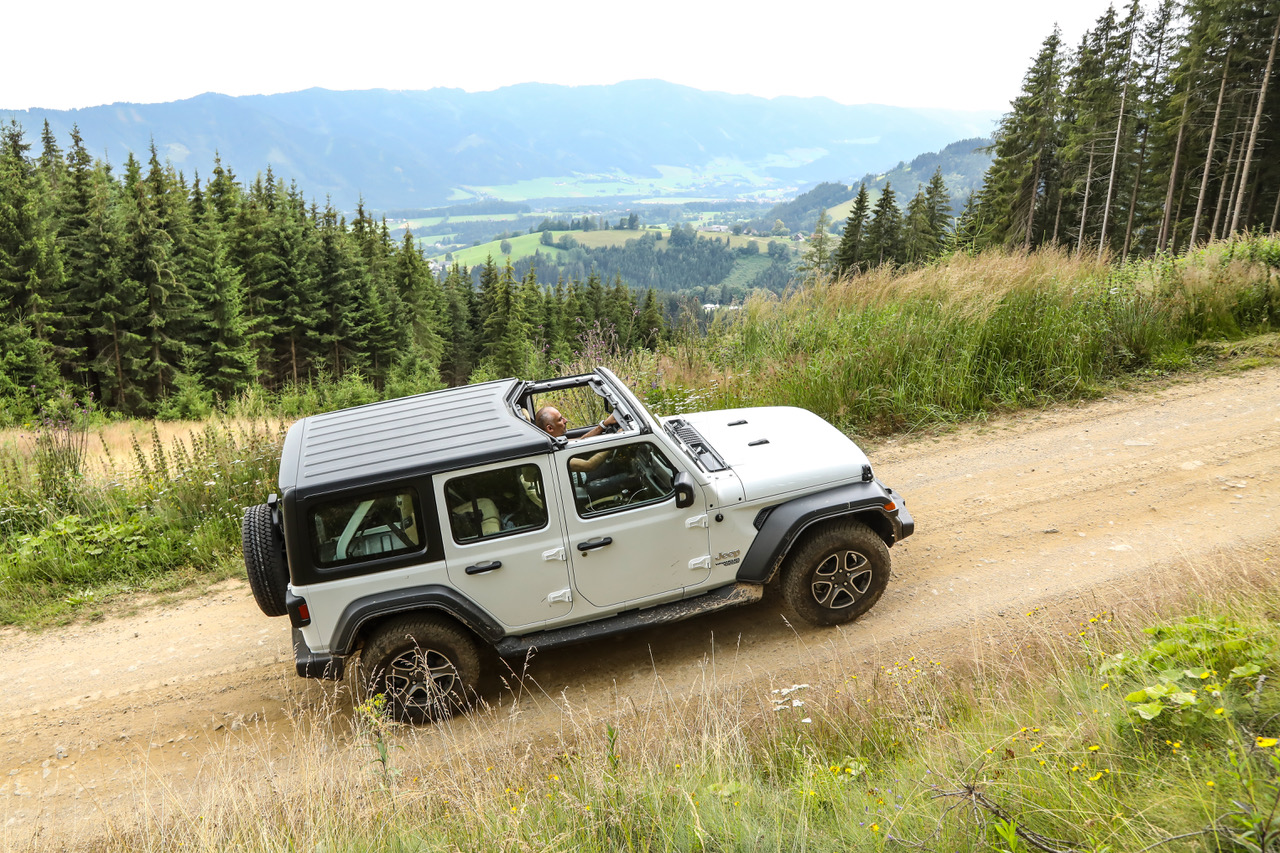 If you’ve never seen the Wrangler’s fully independent suspension put to the test, it is a thing of awkward, yet utilitarian beauty. Each wheel’s full ten inches of articulation allows for the Jeep to apply maximum tire surface area four different planes, giving it the appearance of some splay footed animal caught in difficult passage. Except the Jeep isn't caught, and the wildly divergent angle of each tire, like that of a car with two broken axles, grips rock, dirt, and tree root alike sending you on our way under the most challenging off road circumstances.

Wrangler offers standard electronic stability control, electronic roll mitigation, Hill-start Assist, Hill-descent Control and brake traction control among two dozen standard or optional systems. Just don’t try and use electronic stability control in the snow, Ulrich Hörnke, VP at Chrysler International in Stuttgart shared an illuminating anecdote. While taking a snow safety driving course the instructor demonstrated how, with ESC enabled, the cars simply wouldn’t move in icy conditions, since ESC can't find what it would deem adequate and stable traction. Oh well, that’s what snow tires are for (and to be quite clear, this is neither a problem or something that’s unique to Chrysler products). 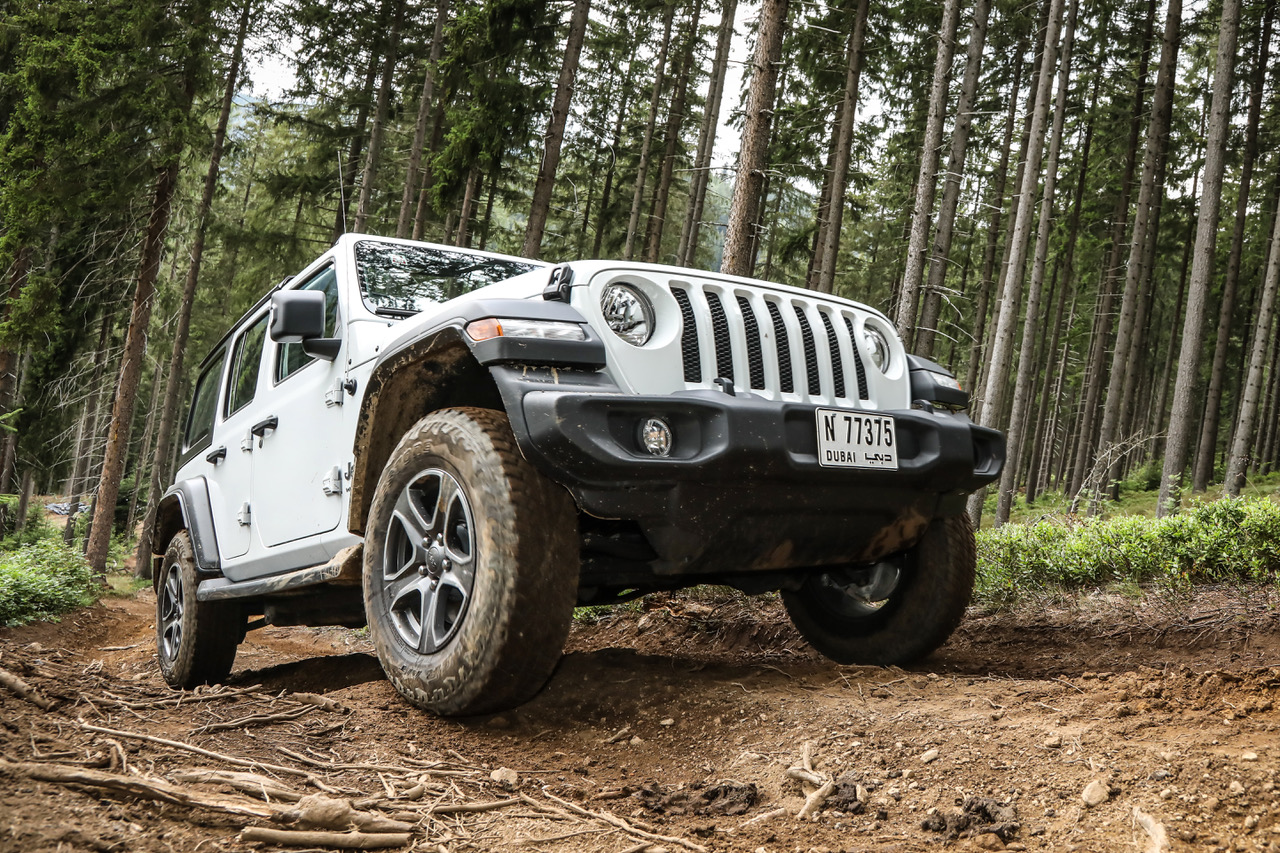 The capable driveline of the Sport and Sahara models include the Command-Trac NV241 part-time, two-speed transfer case that features a 2.72:1 low-range gear ratio and next-generation Dana front and rear axles. In addition, an optional Trac-Lok limited-slip rear differential provides extra torque and grip in low-traction environments, such as sand, mud or snow. 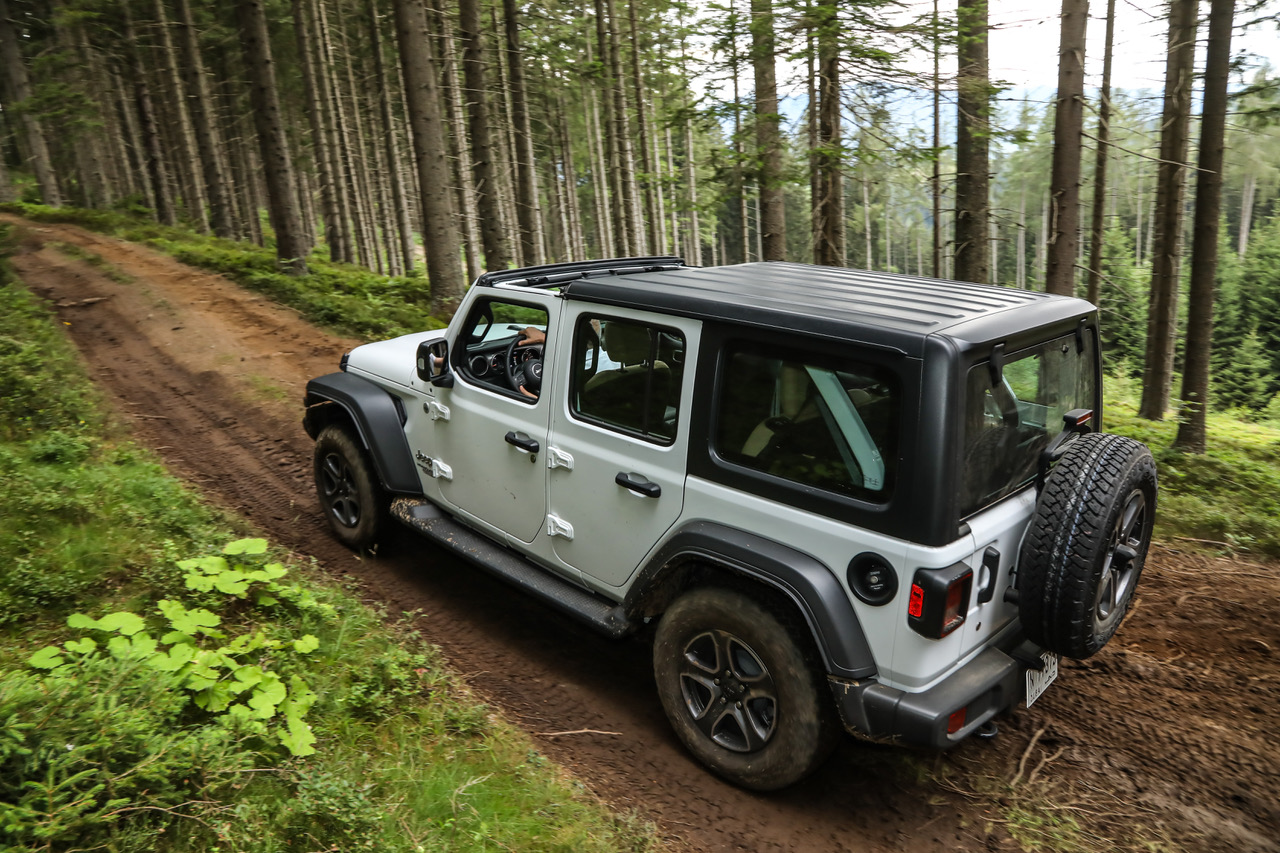 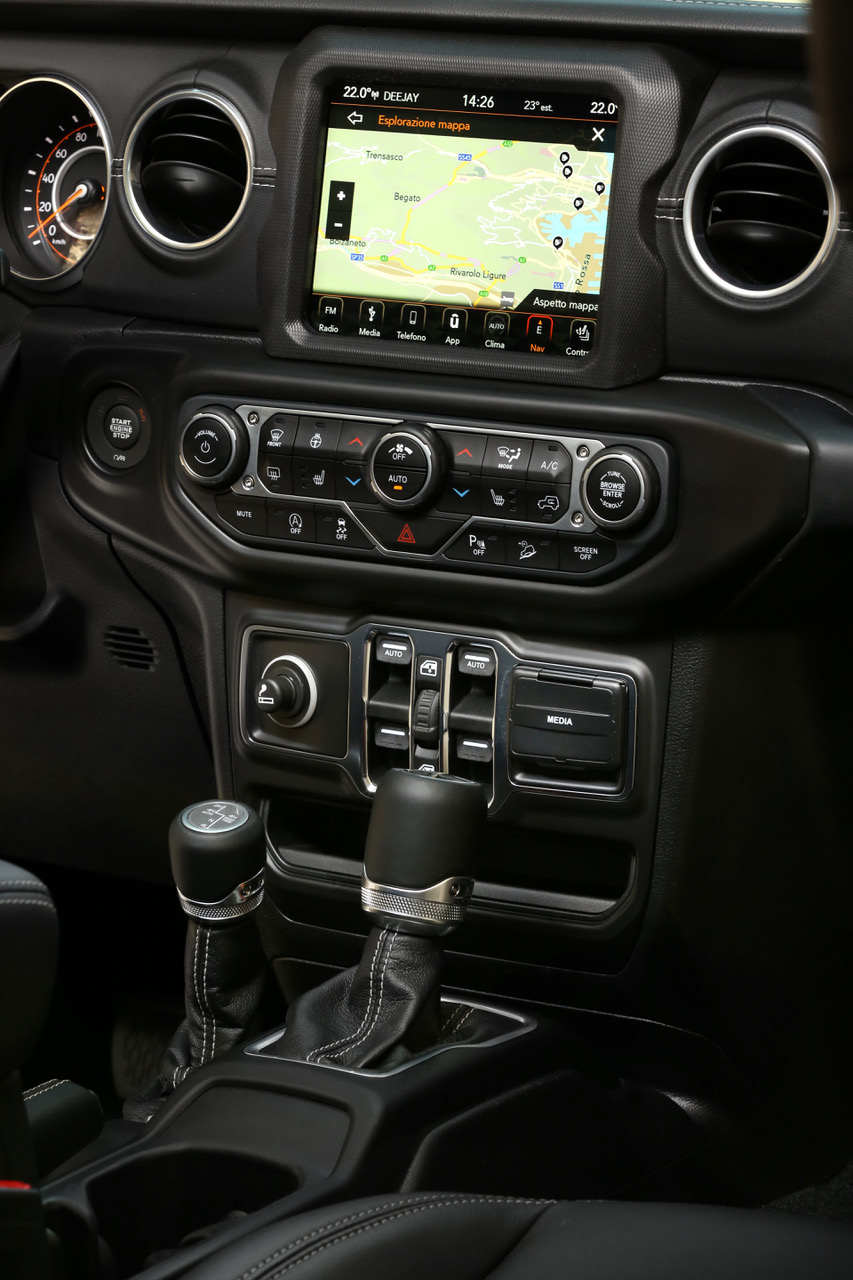 Inside you can entertain yourself with FCA’s Fourth-generation Uconnect system includes Apple CarPlay, Android Auto and the choice of a 7.0- or 8.4-inch touchscreen with pinch-and-zoom capability. Although you’ll probably have your hands full negotiating some craggy boulder or shifting dune.

Wrangler  isn't just sporty, or utilitarian: it belongs to that rarefied go-anywhere vehicle niche that Jeep Wrangler Chief Engineer Tony Petit once described as "the factory mountain goat," which is a much better name than my own Romanesque offering, "dirt chariot." While you might not want to “go anywhere” every day in this chunky beast, that depends entirely on your disposition and there are very few niche vehicle out there that engender as much brand loyalty as Wrangler. So be careful if you drive one of these beasts, for some poor souls are bitten so bad by Wrangler culture, that they never drive on tarmac again. 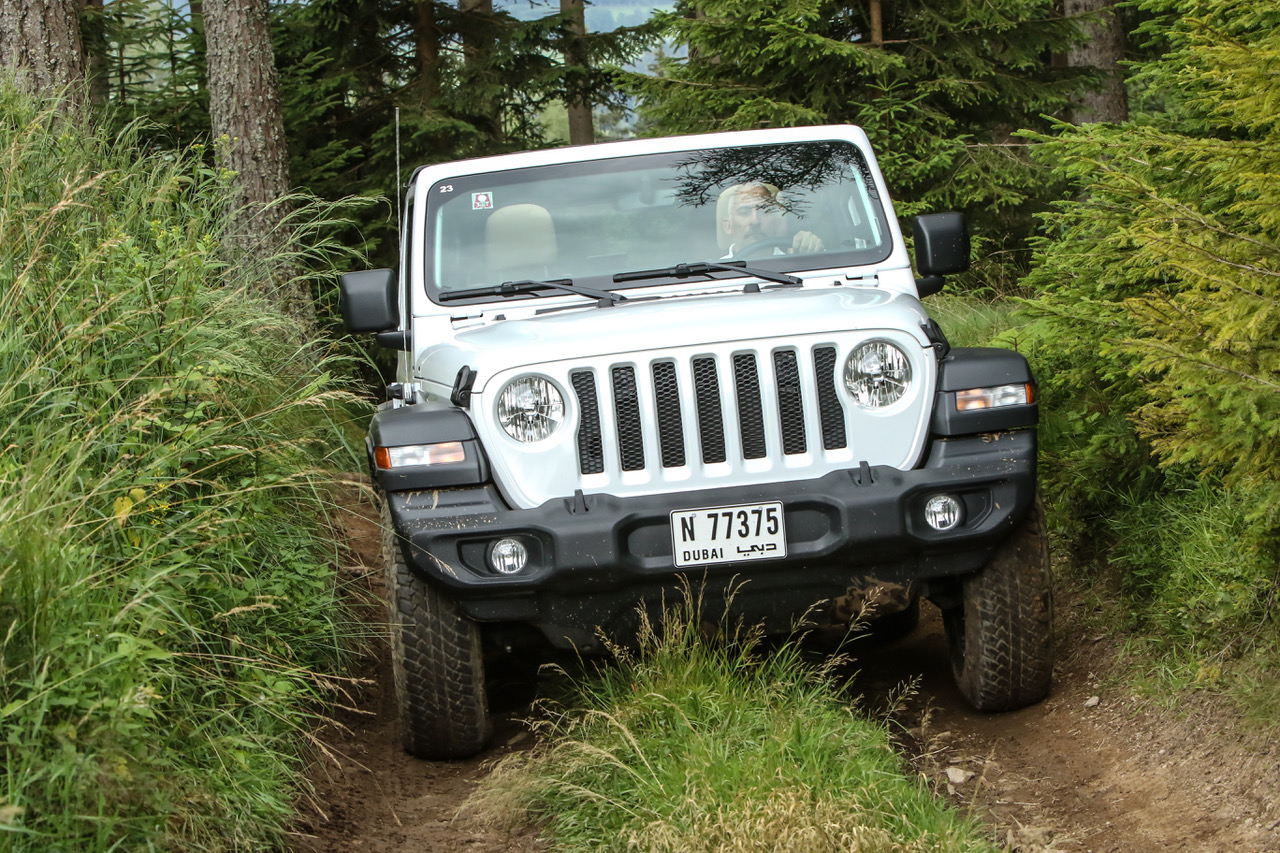 Family Matters: Alfa Romeo's Giulia Is Here to Save You From Boredom, Again