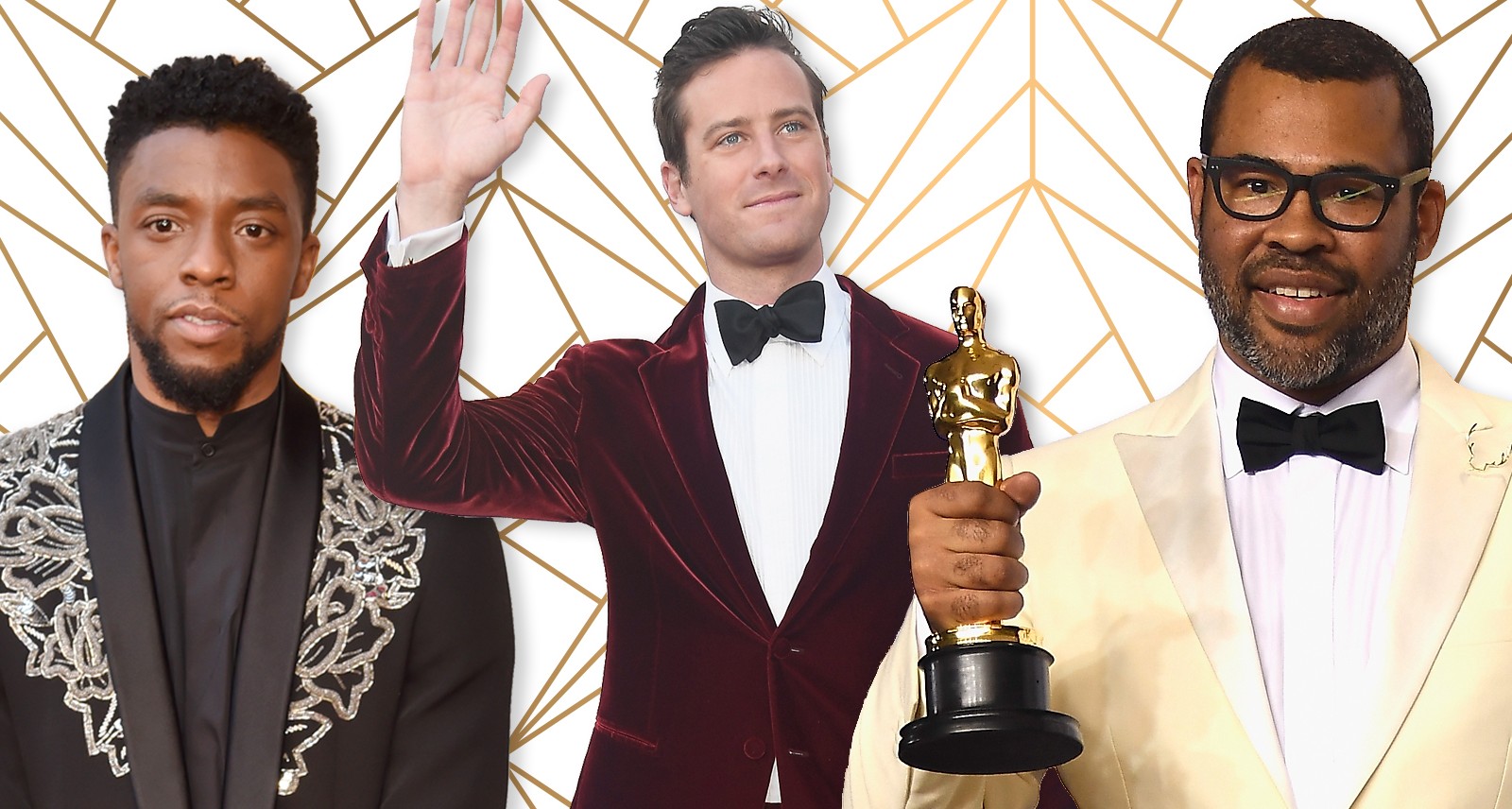 After the #MeToo red carpet blackout at this year’s Golden Globes, the men of Hollywood were clearly raring to let their sartorial freak flags fly last night at the Oscars. Rather than play it safe — which is usually the case at the Academy Awards — the boys got loose with their black-tie looks, pushing the style envelope via colourful smoking jackets, ornate long coats, and lots and lots of velvet. (Honourable mention to U.S. Olympic figure skater Adam Rippon for donning a BDSM chic harness under his tux — the boldest look we’ve ever seen at an awards ceremony since that swan dress.) Here are the finest ‘fits we saw this year. 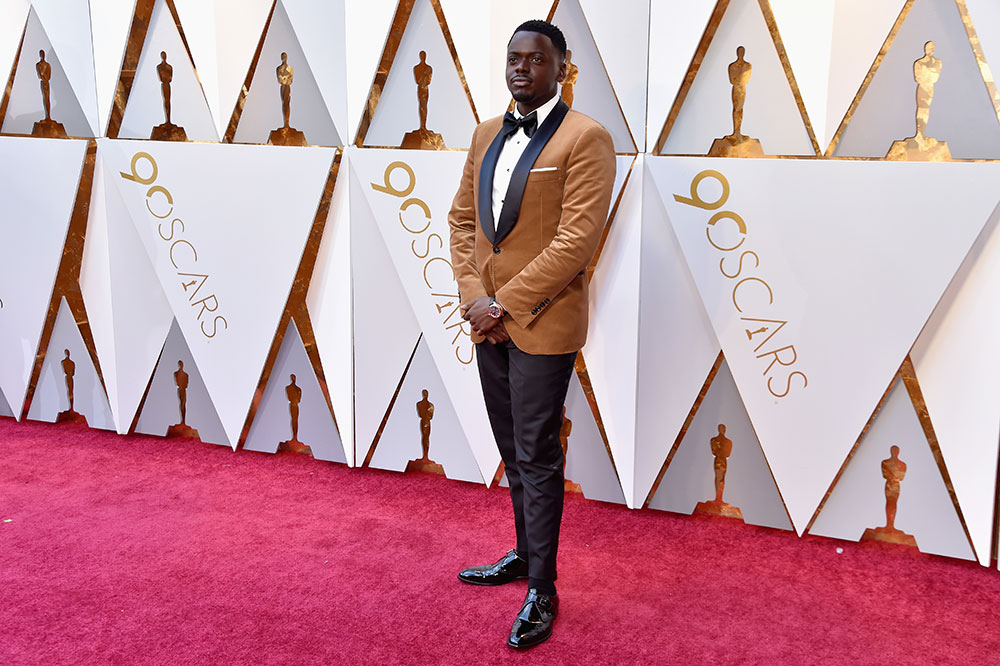 While we’ve seen the ’70s manifest at awards shows lately via over-the-top floral patterns and bell bottoms (thanks Harry Styles), Kaluuya pared the decade’s influence down strictly to his colours — namely, a golden-brown Brunello Cucinelli velvet dinner jacket. The Get Out star rounded the looks out nicely with Tod’s shoes and Montblanc accessories. Cool and calm, just like his red carpet clapback at that Sky News reporter.

The list of people who can pull off all-white suits is prohibitively small (it’s basically just Tom Wolfe and Puff Daddy). However, last night Chalamet earned his spot on it, rocking this white-on-white custom Berluti like a boss with those Chelsea boots. He, of course, got by with a little help from his friend Haider Ackermann (the Call Me By Your Name star and Berluti creative director reportedly have a budding bromance). Bonus points for getting nary a wine stain on the suit the entire evening. (Yes, he is of legal drinking age.) 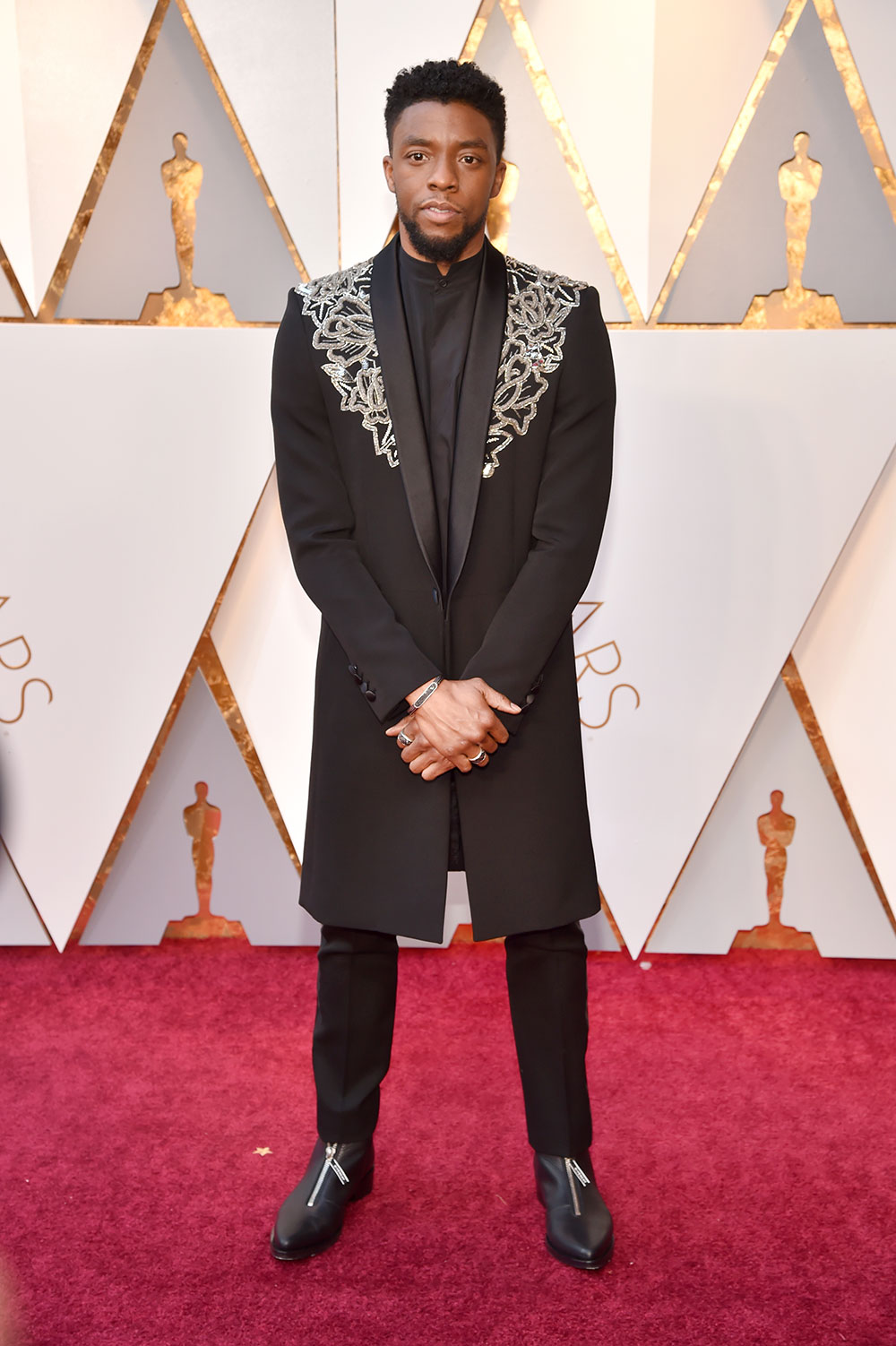 Black Panther is breaking all kinds of box office records right now, so we can’t really blame its leading man for wanting to stay in character on the red carpet. Boseman pulled up looking like he came straight outta Wakanda, wearing a handmade Givenchy Haute Couture long coat finished with elaborate silver embroidery. Check out the David Yurman bling and those silver zippers on his leather shoes. Boseman and King T’Challa are now one and the same. Going method has never looked more badass. 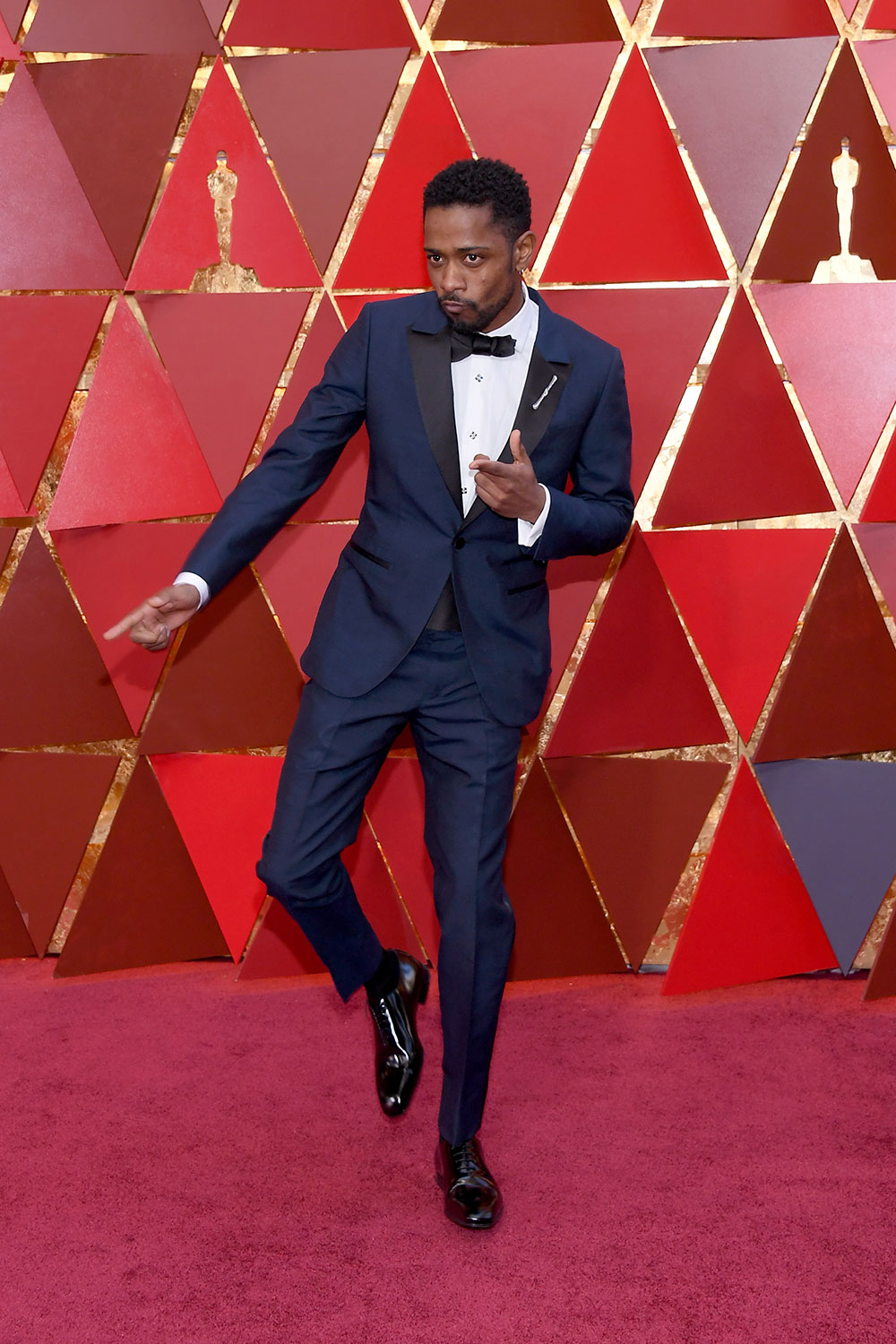 The Get Out and Atlanta star was low-key the coolest man at the Oscars, live-tweeting the entire ceremony from backstage. And he donned a cool AF outfit to match — a ridiculously sharp, sustainable (made with a high percentage of Tussah silk, “gathered in the jungle from cocoons of wild silk moths”), midnight-blue Ermenegildo Zegna Couture tux. Forget Idris Elba — make this guy the next Bond. 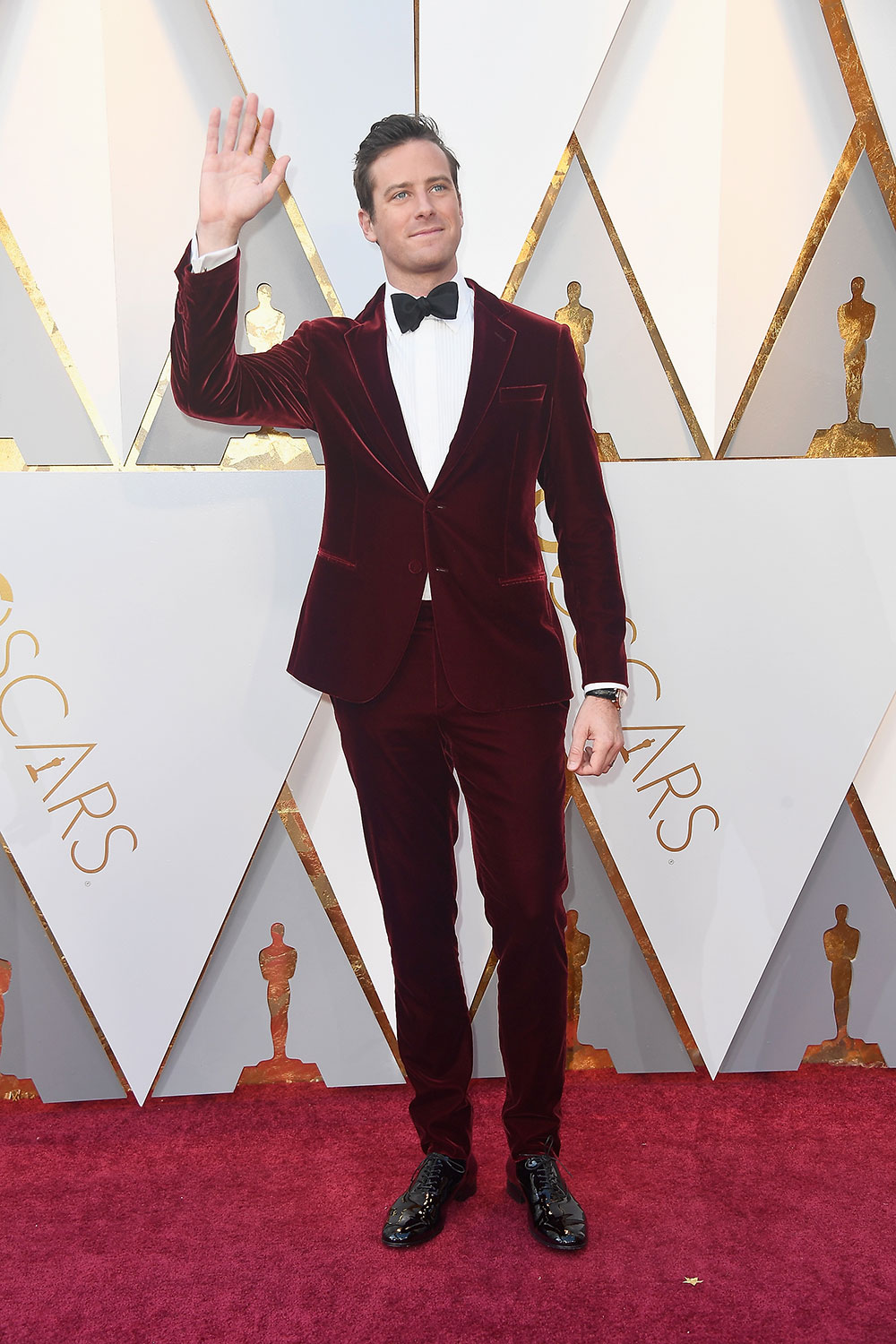 We saw a great deal of velvet blazers last night, but Hammer was the only one with the mangoes to go full velvet. In a rich oxblood colour, no less. Word is the Call Me By Your Name star was battling a stomach flu the night before. Wise move going with the bold hue to distract from a potentially pale, sickly complexion. When it’s Hammer time, it’s Hammer time. 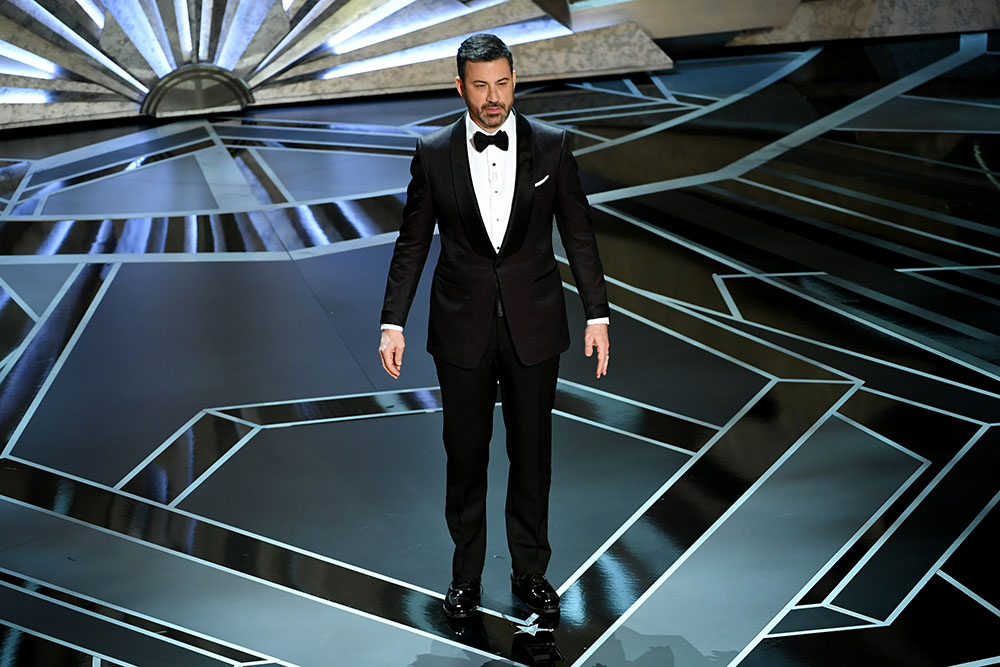 Hey, in an evening full of sartorial risks, someone had to play the straight man. Good on the Oscars host for holding down the role with class, opting for a dapper, traditional Tom Ford monochrome. (Our favourite of his three costume changes of the night.) The satin-lined lapels (and his many Weinstein jabs) added some nice points of interest. 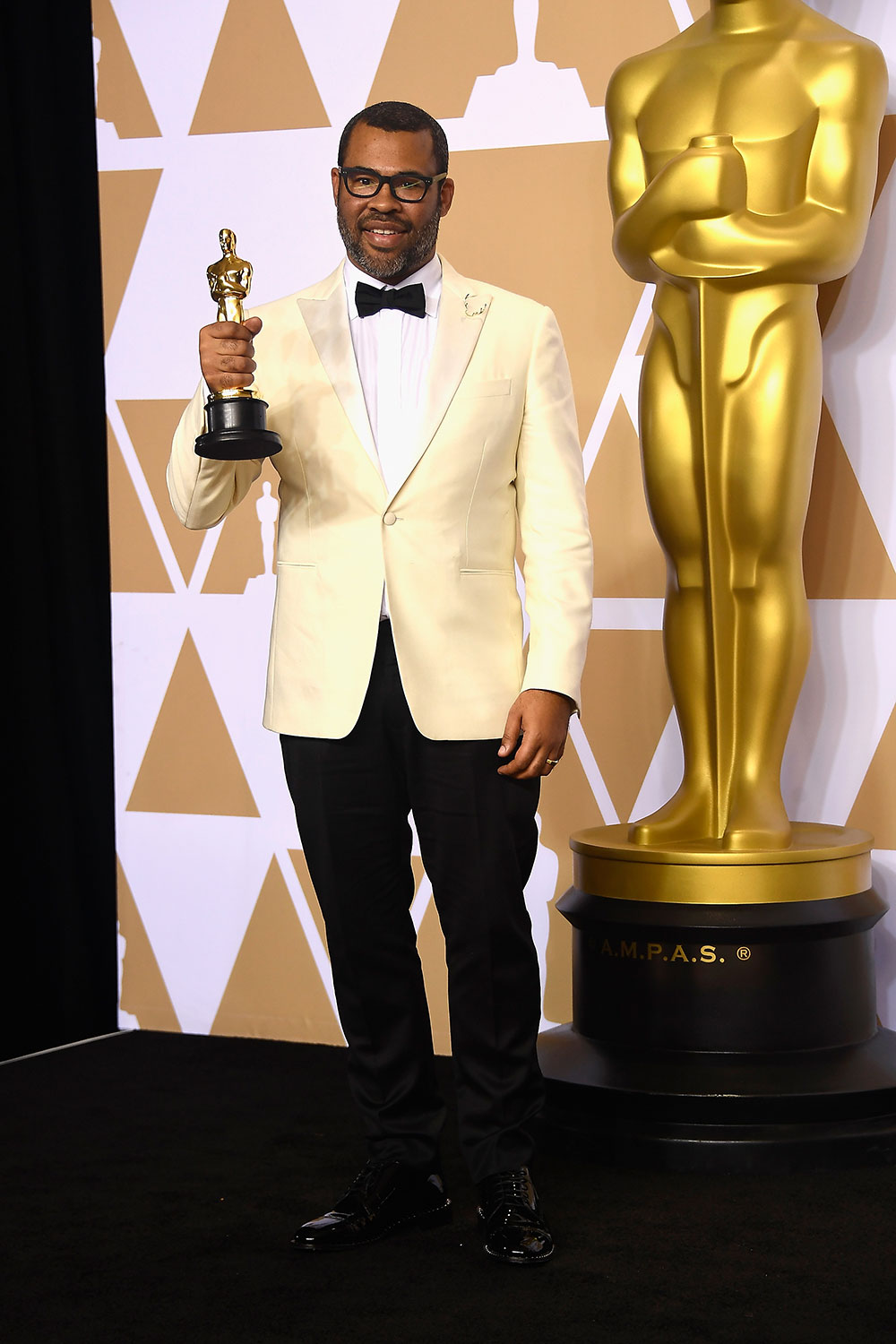 Add Jordan Peele to that list of dudes who can rock a white blazer without looking all Saturday Night Fever. The Get Out director and screenwriter — who last night became the first black person to win the Oscar for Best Original Screenplay — strayed just enough from the norm, looking resplendent in a slightly off-white Calvin Klein 205W39NYC jacket and Montblanc watch. Look closely and you’ll see that his lapel pin is a bloody set of antlers, a (spoiler alert?) subtle nod to one of Get Out‘s motifs. The man’s come a long, long way from playing sad 50 Cent.

These Were the Best-Dressed Men at the 91st Academy Awards

Steve Aoki: "I Think It’s Really Punk to Have Your Own Fashion Line"

7 Show-Stopping Looks to Cop Right Now, as Worn by the Stars of Cirque du Soleil's ‘Volta’

You don't have to be a Brit to admire Chaps & Co.