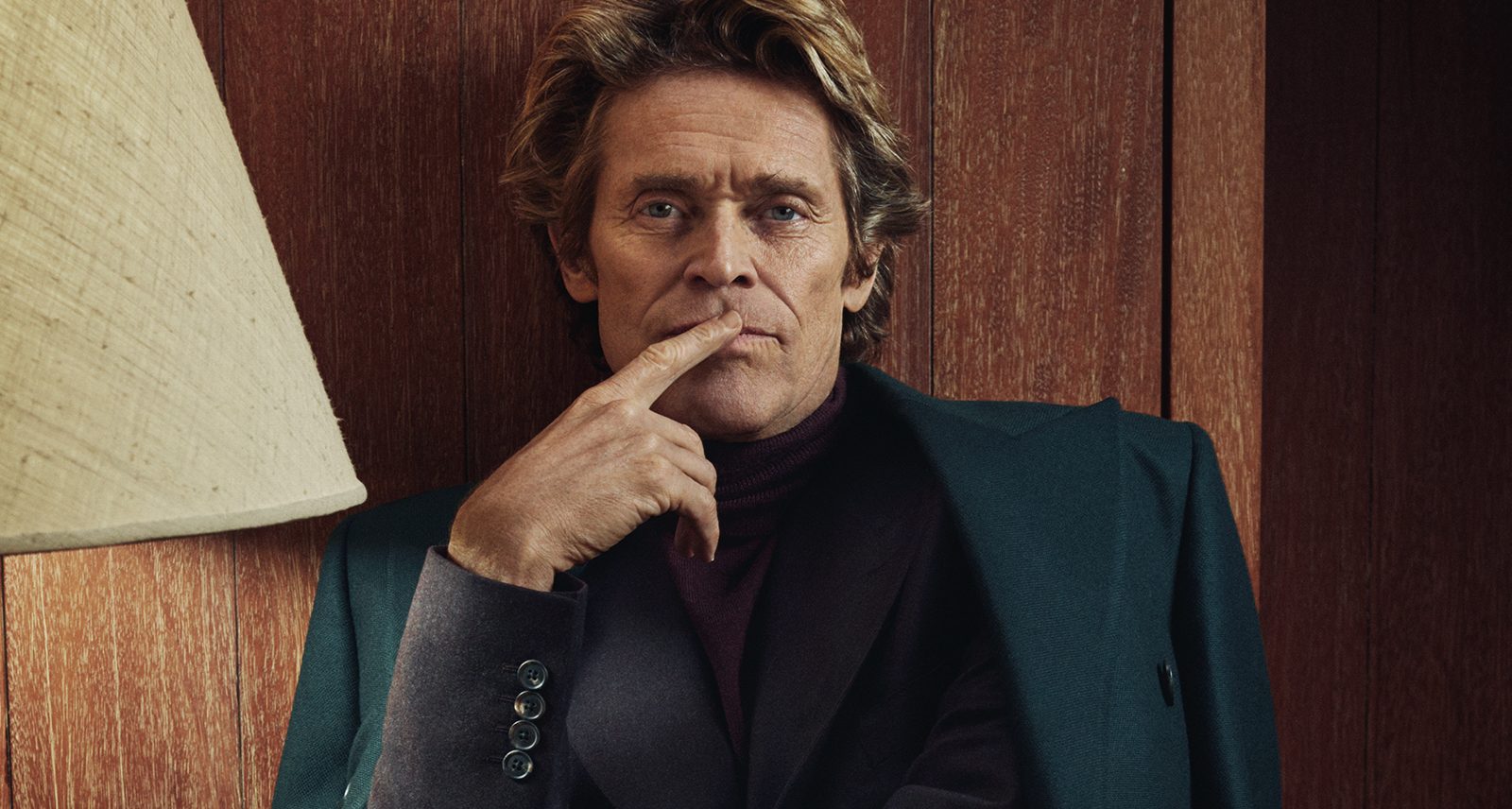 Midway through a lengthy discussion about his role in Edward Norton’s new noir gumshoe drama Motherless Brooklyn — a discussion which includes digressions into the Shakespeare, Star Wars, New York City’s ethnic diversity, and how urban planning should be informed, foremost, by empathy — Willem Dafoe catches himself. “I’m kind of spinning out!” laughs the 64 year-old actor, who’s in Canada for the annual Toronto International Film Festival. “I should probably talk more about my own experience.”

But Willem Dafoe doesn’t seem especially interested in his own experience. “I’m not here to peddle my life story,” he says. “I’m not here to peddle what I think. I’m here to be transformed, and to broaden my view of the world. Hopefully through playing these characters, that can be shared with an audience.” What he cares about, what has driven him through his nearly four decade career as a screen actor, are his characters. Introducing Motherless Brooklyn at TIFF, Edward Norton hailed Dafoe as a “polestar” — the sort of actor whose career other actors strive for. “It’s very flattering,” Dafoe confesses, a little bashful at the attention. “The implication is I didn’t have an institutional approach to doing what I do. I came up, I worked for many, many years, at an avant-garde theatre. I still do theatre. My choice of roles is a little eclectic, and not really guided by a career path.”

With his sharp, lupine features and wavy red hair, Dafoe is probably best known for playing bad guys. “A fine actor with a face that will bring him villain’s work forever,” wrote New York Times critic Janet Maslin in her review of William Freidkin’s bitter thriller To Live and Die in L.A. (1985), which cast Dafoe as scheming counterfeiter Rick Masters. It’s a role he repeated, in various configurations, throughout his career: as the lecherous Bobby Peru in David Lynch’s Wild At Heart, cruise ship hijacker John Gieger in Jan de Bont’s Speed 2 (1997) and, perhaps most notably, in the double-role of Norman Osbourne (a.k.a. The Green Goblin) in Sam Raimi’s Spider-Man (2002). While his capacity as a scowling screen-villain is downright preternatural, Dafoe’s choice of roles is laudably broad-based: the doomed idealist sergeant Elisas in Platoon (1986), the unstable FBI agent Paul Smecker in the crime cult classic Boondock Saints (1999), a pouty German first mate in The Life Aquatic (2004), and a nameless man-splaining therapist in Lars von Trier’s arty horror provocation Antichrist (2009), in which he also plays a computer-animated talking fox that screeches, “Chaos reigns!” He has played T.S. Eliot and Vincent Van Gogh and Jesus of Nazareth and a digitally de-aged merman vizier. He’s an actor known, in short, for taking risks. But he doesn’t see it that way. “They’re not risks for me,” Dafoe insists. “They’re opportunities. You look for things that challenge you, so you can learn things. It pushes you. And not for the sake of accomplishing things. It keeps you alive.”

Dafoe was at TIFF with two films: the above-mentioned Motherless Brooklyn, in which he plays a key role (as, in his words, “a homeless, paranoid crank”) unravelling a Chinatown-styled New York City public works conspiracy plot, and The Lighthouse, in which he plays a drunk, flatulent lighthouse keeper, opposite Robert Pattinson.

“They’re not risks for me. You look for things that challenge you, so you can learn things. It pushes you. It keeps you alive.”

Taken together, the two films illustrate the range of Dafoe’s roles. Motherless Brooklyn is a polished piece of genre cinema, adapted from Jonathan Lethem’s novel of the same name, which director Edward Norton largely populates by veteran theatre actors (Dafoe included). “Edward hired actors who were self-starters,” Dafoe explains. “He hired actors who weren’t going to be overly precious or emotionally needy.”

Contrast this with The Lighthouse: a sparse, black-and-white psychodrama that makes considerable demands of its cast and crew. The film was shot on location in a small, windswept community in rural Nova Scotia, which writer-director Robert Eggers has described “as a very unforgiving place.” The location, and harsh conditions, inform Dafoe’s performance as Thomas Wake, a vulgar old salt merrily jigging on the edge of madness. Yet when discussing The Lighthouse Dafoe is hesitant to indulge the sort of “woe-is-me” on-set anecdotes that tend to net working actor’s credibility — if only for making their performances seem, well, like actual work.

“Actors love to talk about how difficult it was,” Dafoe says. “It earns them sympathy. That’s not what I’m asking for…It was difficult in the sense that it was not comfortable. But that’s okay! It was such full immersion. It raises the stakes. It helps you go to a different place than you’re used to. There’s no need to invent stuff. It’s happening.” Dafoe is no stranger to this sort of deep immersion. For Platoon, director Oliver Stone parachute-dropped his cast and crew into the midst of a Filipino jungle (passing as Vietnam), smack in the middle of the Yellow Revolution that saw brutal far-right president Ferdinand Marcos deposed. For Antichrist, Dafoe decamped to the Forrests of northern Germany (passing as Washington state) with costar Charlotte Gainsborough, Danish director Lars von Trier, and a sparse team, exploring the depths of depression and mania against the dense thickets of spooky pines. “These three films — The Lighthouse, Antichrist, and Platoon — all have one thing in common,” Dafoe explains, “we were in isolation…When I say ‘isolated’ I mean from Hollywood, urban life. All of that was very far away from us.”

Asked if good performances are, as many more self-persecuting actors insist, forged in such isolation and brutality, Dafoe laughs his scrappy laugh. “I don’t believe that!” He says. “Let’s go back to the great phrase, ‘Pain is inevitable, suffering is not.’ That’s how I feel.” For the actor, suffering is a form of engagement. Pain is transfigured, through the work of performance. It sharpens his concentration. It narrows his focus.

It all sounds vaguely religious: like a professionalized version of the passion Dafoe enacted as Jesus in Martin Scorsese’s controversial Easter epic The Last Temptation of Christ (1988). And indeed, for his consummate professionalism, Dafoe admits that finding these characters, and these performances is “sacred.” Discussing it, he goes deep. He’s thoughtful. Almost philosophical. But just as he seems about to “spin out” again, he pulls himself back again, humbling himself. “Sorry,” he chuckles. “I go there sometimes! I can’t bear the normal showbiz chatter. So I go the other way.” This tendency to go the other way has, in many respects, defined Willem Dafoe’s rangy, constantly switchbacking filmography. There’s an old line in Hollywood about how actors (and directors) balance personal projects against more popular endeavours — a “one for them, one for me” approach. With Dafoe, the arithmetic is closer to “one for them, nine for me.” Still, Dafoe is keenly aware of how those above-the-title roles in bigger budgeted blockbuster movies (from Spider-Man to Aquaman to XXX: State of the Union) enable his more multifarious ventures. “When they’re financing movies, even small movies now, it’s just crazy how they need a cast,” Dafoe says. “If the cast is not well-known because they’ve been in successful movies, they don’t know how to sell the movie.”

The Lighthouse proves a particularly interesting case study. While boasting a buzzy director in Robert Eggers (whose debut, The Witch, Dafoe watched and rewatched on back-to-back days), the casting of both Dafoe and Robert Pattinson works to drum up interest for a defiantly oddball indie. Like Dafoe, Pattinson has also leveraged his mainstream fame to pursue smaller, more personal projects. “He has parlayed his great success with those Twilight movies into seeking out directors who, normally, you wouldn’t think would work with a guy from the Twilight series,” Dafoe explains. “But he has sought them out. And I’m sure it has helped with financing. There’s a happy marriage there.”

Dafoe knows that he carries a similar cache, in part because of his more mainstream work: “They don’t hire me for Antichrist because I was in Spider-man. But they appreciate that it’s a reference point, and they can sell it in some territories with, ‘Hey! This is the guy from Spider-man.’” While he may well, for many, forever be the “the guy from Spider-man,” his ability to move between wildly varying roles — blockbuster and indie, scheming villain, sympathetic idealist, and everything in between—remains encouraging, suggesting a relationship between the mainstream moviegoing and more adventurous cinema that’s mutually beneficial.

Still, in another, more perfect world, one hopes that someday people will spot Willem Dafoe on a movie poster or see him striding down the street, jagged edges, ginger shocks and all, and exclaim, “Hey! This is the gassy, kerosine-chugging guy from The Lighthouse!”