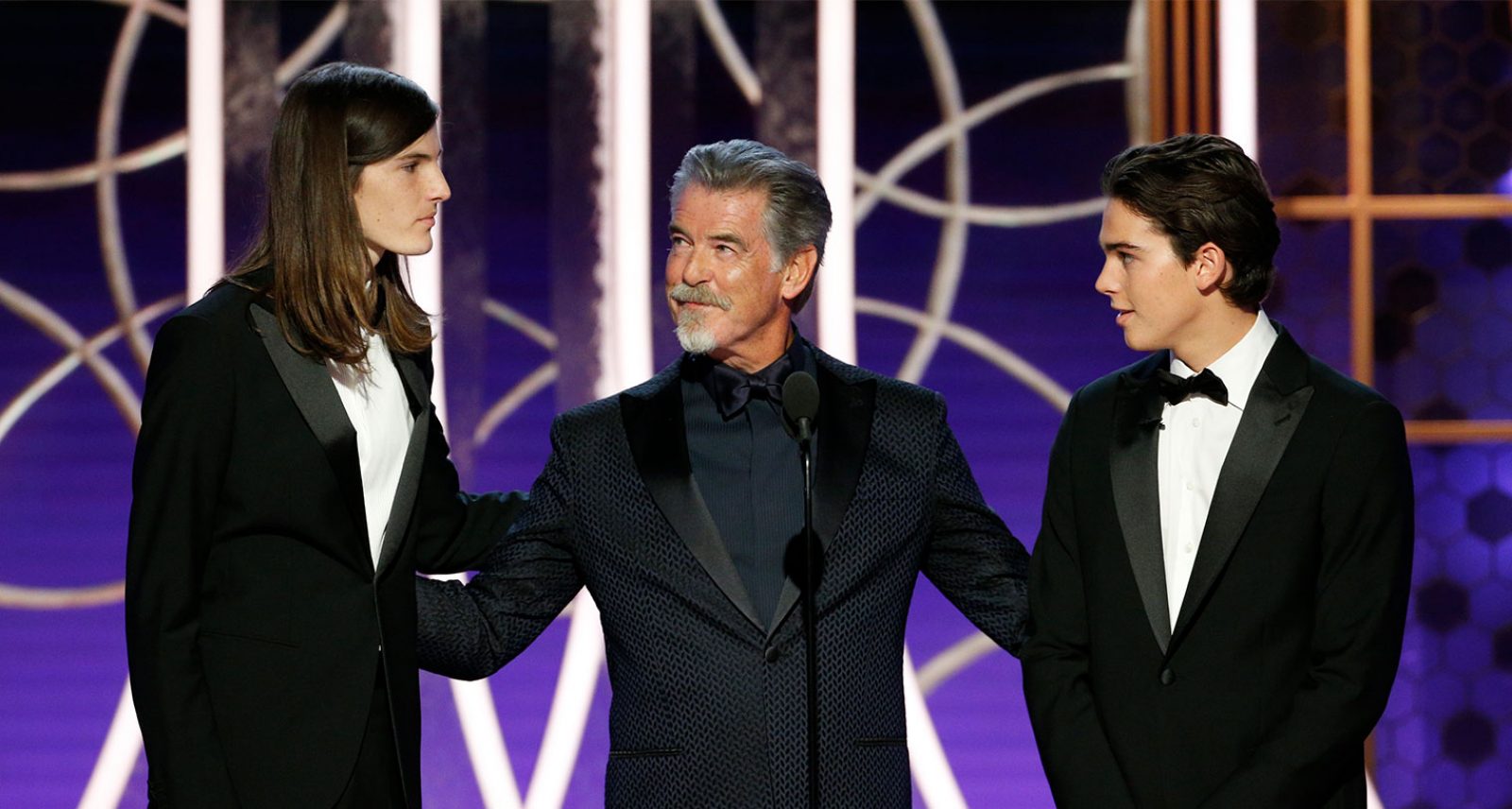 Hollywood Awards Season is officially here, which means our favourite movie stars are taking to red carpets and delivering a fresh round of formalwear style inspiration. Sure enough, the film industry’s most dapper and daring gentlemen made their way  to the 77th Annual Golden Globe Awards last night, and we sat down in front of our 4K televisions to admire the standout suiting in all of its glory. Here were the highlights. Sophistication comes so naturally to former Sharp cover star Pierce Brosnan that one of the evening’s best onstage bits involved Will Ferrell fawning over just how handsome Brosnan is in person. For his red carpet look, the former Bond opted for a navy tuxedo jacket with a subtle honeycomb pattern, complemented by a crisp goatee. It turns out good style runs in the family, too — Brosnan’s sons, Dylan and Paris, served as the Golden Globe onstage ambassadors this year in fine suits of their own. Meanwhile, another former Sharp cover star, Bill Hader, garnered attention not just for his look — a classic tuxedo (we approve!) — but also for his red carpet co-star: actress Rachel Bilson, who first stole our hearts as Summer on The O.C. This event marked the couple’s red carpet debut. Kit Harington, perhaps in mourning for the end of his Game of Thrones gig, opted for a dramatic all-black ensemble. Billy Porter took things one step further with an all-white tuxedo — a custom look by Argentinian designer Alex Vinash — accompanied by a trailing feather train. Is he an angel? Are we already that gone? Cementing velvet’s status as one of the night’s big trends, The Goldfinch star Ansel Elgort donned a navy suit with incredible sheen. And, in yet another moment for New Masculinity, he accessorized with white nail polish and subtle glittery eye shadow. Of course, the evening wasn’t all black and white suits — Wesley Snipes opted for a deep maroon. And, if we may say so, he looks like he had the most fun of everyone there. Consider that the benefit of being bold? Proving that the family that impresses together wins Best Television Series — Drama together, every single Succession cast member looked fly as hell. But Nicholas Braun was, as always, the ensemble’s true scene-stealer in a daring black-and-blue tuxedo. Some people say those colours don’t usually pair well together, but then again, Cousin Greg has always made a class act out of being awkward. Moving inside, one of the trends that we couldn’t have seen coming was the number of tinted glasses worn by those accepting awards. Perhaps they had all seen Rocketman and were taking inspiration from the trend’s original ambassador, Elton John. Bonus points for the rocket brooch. That said, the best suit of the night was worn by Fleabag creator Phoebe Waller-Bridge. And in an altruistic move, she’s planning to auction off the suit — designed by Ralph & Russo — to raise money for the Australian bushfire relief. (For more coverage of the night’s best womenswear, check out this roundup by of our sister publication, S/.)

With Once Upon a Time in Hollywood and 1917 the night’s two biggest winners (for Best Motion Picture — Musical or Comedy and Best Picture — Drama, respectively) all eyes are now on the Oscars on February 9 to see how this year’s slate of prestige films fare there. And, of course, what the winners wear to receive their recognition.

Silvia Venturini Fendi Has Her Eyes Firmly on the Future

The View From Here: Slouchy Sweaters and Pitch-Perfect Tailoring You Need This Season