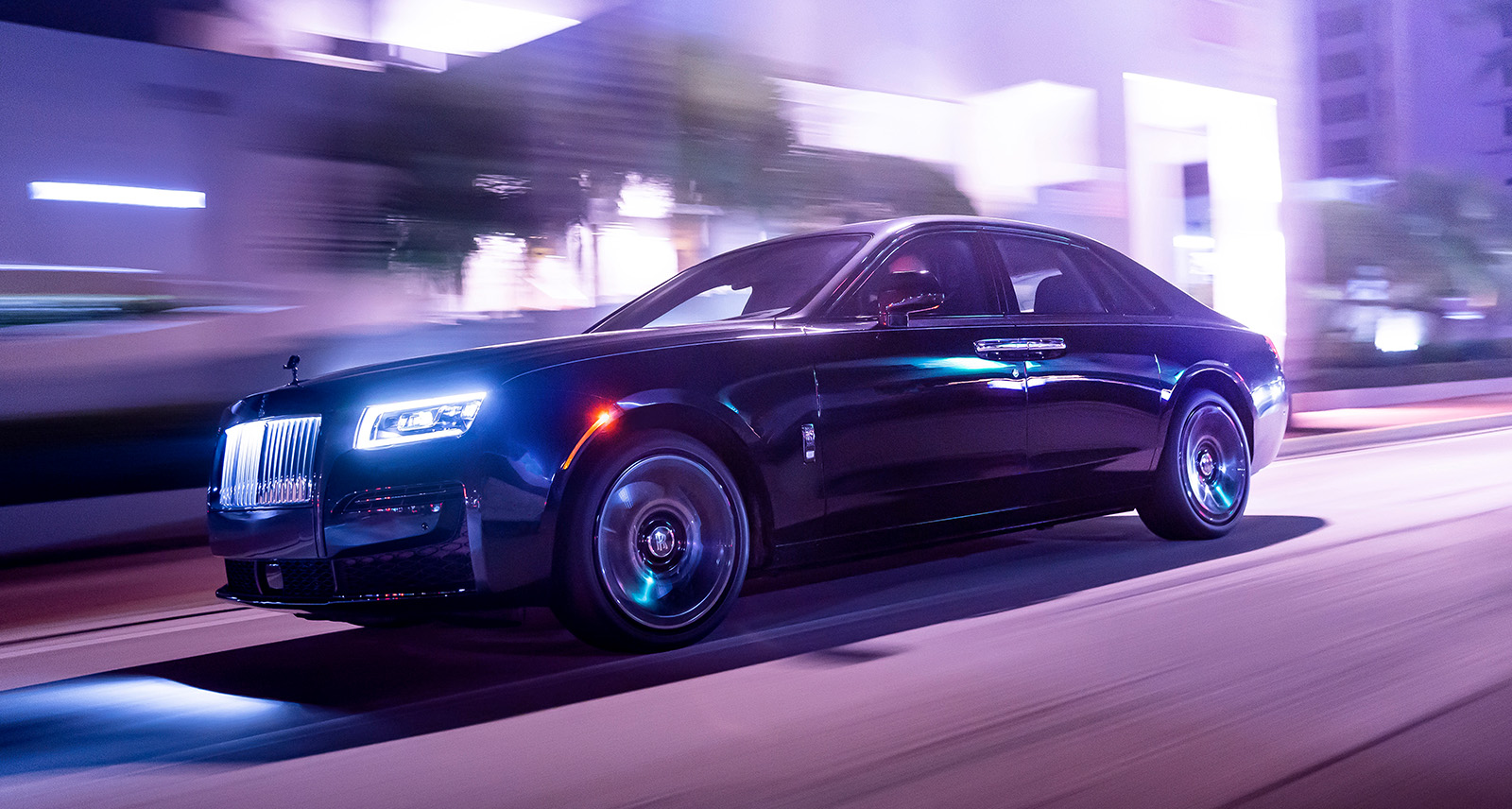 To hear Rolls-Royce tell it, the upstanding British marque’s Black Badge cars are meant to be a little bit naughty. The company’s CEO, Torsten Müller-Ötvös, says these machines are like the brand’s alter-ego. These darkest of variants, including the 2022 Rolls-Royce Ghost Black Badgewe drove in Miami last week, are like what Batman is to Bruce Wayne, or what punk rock is to classical music, because — well, honestly they just have a little more power, slightly sharper handling, a bunch of tasty new customization options, and the backing of some very clever marketing. What’s interesting is how well the Black Badge label has done for the company.

The Black Badge tweaks have been enough to successfully attracted new, younger clients into the Rolls-Royce Motor Cars fold. Remember, not too long ago, R-R was the stuffy old company of top hats and morning coats, of literal royalty, but Black Badge is pulling in people wearing Off-White and Aimé Leon Dore.

The all-new Ghost — which runs on Rolls-Royce’s own bespoke architecture — is the latest model to break bad and get the full Black Badge treatment. (The old Ghost was one of the OG Badge cars back when the sub-brand launched in 2016.)

Driving the new Ghost Black Badge in Miami recently, what’s most striking is just how good this car looks painted black. Black Badge cars don’t have to be black of course, but a majority of buyers have apparently opted for this new signature black, the blackest-black in the known automotive universe. It requires over 100 lb (45 kg) of paint. The effect is very goth, and pairs well with the Badge’s exclusive – and spectacular – 21-inch carbon-fibre rims. The wheel’s barrel is made of 44 layers of carbon, while the centres are forged aluminum with titanium fasteners holding it all together.

The cabin is very goth too, with blacked-out trim and fetching new Technical Fibre veneer made of Bolivar wood overlaid with a weave of carbon strands and metal thread. It’s elegant, subtle, and devilishly time-consuming to make.

As for what the Black Badge is like to drive, it initially feels a lot like the new Ghost, which is to say it’s like floating through the clouds wearing noise-cancelling headphones. It’s a haven from the outside world, but it’s more than that now too.

On a 1.25-mile closed road along the Miami coast, police officers kept a lookout while we hustled the 2.5-tonne machine flat-out. (We did it for science of course, because you really need to hustle this thing to discover what differences the chassis tweaks have made.) “Low” mode speeds up gear changes when you’ve got the pedal pressed into the plush carpet, but the eight-speed box is still always buttery smooth. A sprinkling of extra power and torque for the Black Badge brings the totals up to 591 horsepower and 664 lb-ft respectively. Even though it does 0-100 km/h in 4.7 seconds, the acceleration isn’t violent. It feels remote and somehow distant. The police officers standing guard did seem slightly concerned by how quickly this massive Rolls-Royce can build speed though.

Slowing down so much car would be scary if the brakes weren’t so prodigiously powerful, but they are. Even better, the Black Badge’s brake pedal has a more reassuring initial bite. The steering is a touch heavier too and larger air springs hold up the car better through corners. Turn hard enough to get the tires squealing and this behemoth simply leans over and digs in. The all-wheel drive and rear-steering are a godsend.

The Black Badge changes aren’t dramatic – it still drives like a Rolls-Royce and not a sports car — but the gap is slightly narrower and the changes are welcome.

Back in 2012, Rolls-Royce Motor Cars CEO Torsten Müller-Ötvös saw someone pull up in an all-black Phantom and he couldn’t look away. “Then we started to look around,” he says, “and particularly in California, you saw at that time already some Rolls-Royces which were ‘murdered out.’ That made us think, okay, there is something here.” And, he was right. Roughly 40 per cent of buyers now opt for Rolls-Royce’s moody Black Badge models, despite – or perhaps because of – the roughly $50,000 premium these models command.

Black Badge has succeeded in bringing new clients to the brand without alienating the old ones, all whilst keeping prices high and products exclusive. Other high-luxury brands would do well to pay attention.

RANGE ROVER WESTMINISTER, IS THIS THE BEST VERSION TO BUY?