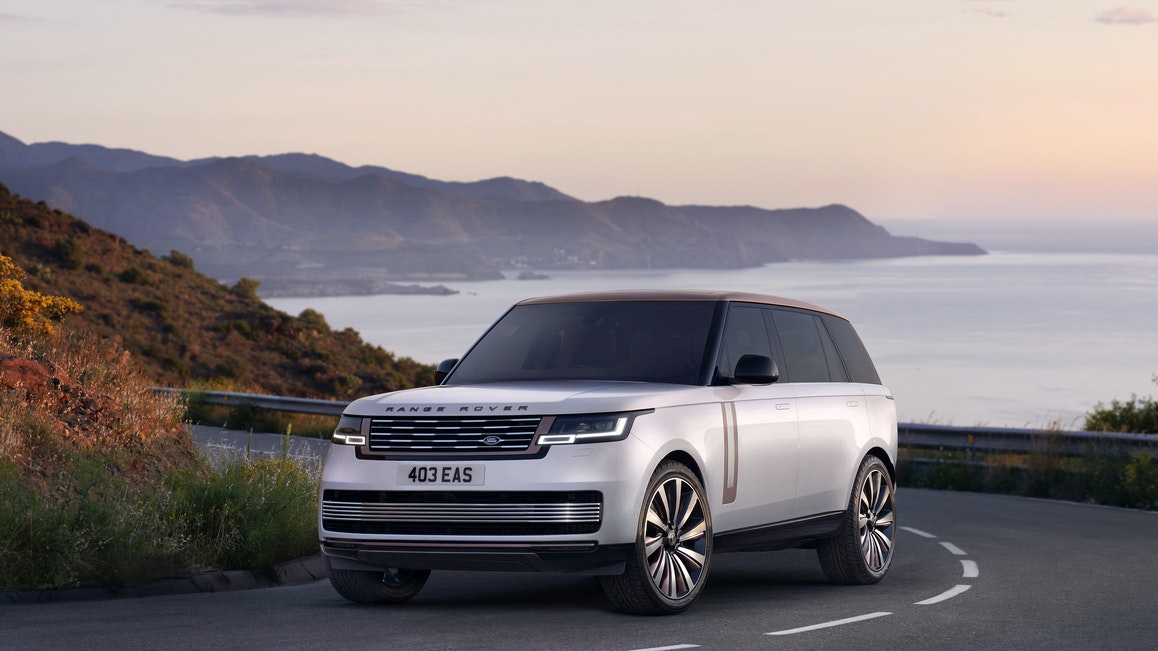 There's a saying, "if it ain't broke, don't fix it". It appears Land Rover have been treading on the same lines as fifth-generation Range Rover looks similar to the fourth-generation model when viewed head-on. But get closer, and you'll notice the details. The LED headlight cluster is all new and slim and features two million micro-mirrors. The grille is also new and sits deeper while the bumper receives a massive overhaul to present a more elegant look while housing all the cameras and sensors within.

The case is similar on the sides, with a touch of modern design added to the existing sketch. 23-inch rims are the biggest wheel ever fitted to a Land Rover as the shoulder line caves into the cabin, a unique touch. And finally, the all-new rear end with slimmer, vertically stacked taillights and a black panel joining the two ends. One doesn't even have to kneel to notice how Land Rover has made do without a rear bumper. And for the Land Rover enthusiasts, the 2022 Range Rover does get a split tailgate!

Unlike the exteriors, the interiors witness a massive overhaul. Starting from the all-new steering wheel, which looks similar to the American wheels of the 60s. The infotainment unit also gets a new 13.1-inch curved floating glass touch screen, protruding out of the dashboard and featuring haptic feedback, a first in the Range Rover. Further technological additions include a 1600W Meridian sound system, wireless smartphone connectivity and a cabin air purification system which appears to be the new norm in a post-COVID world.

But more than the hi-fi technology, potential customers would be taken aback by the materials used to encircle the cabin. Land Rover claims "customers (will) have a wider choice of materials and finishes than before, including innovative textiles and tactile Ultrafabrics. For instance, owners can choose a wool blended fabric by Kvadrat as a free alternative to leather - a first in a Range Rover. And did I mention Land Rover embedding buttons to close doors in this? That is Rolls Royce level luxury!

An all-electric Range Rover will see the light of the day for the electric-savvy crowd but not before 2024. But that doesn't mean this fifth-gen luxury SUV is completely devoured of electricity. This 2022 iteration gets eight powertrain options, all featuring electrification to an extent and paired to an eight-speed ZF automatic gearbox.

Spearheading this range is a 3.0-litre six-cylinder Ingenium petrol plug-in hybrid engine with a 38.2kWh lithium-ion battery and a 105kW electric motor integrated with the transmission. This can be had in two states of tune, with the range-topping P510e trim putting out a combined maximum power output of 510PS and 700Nm of torque.

If efficiency is your way to ride a Range Rover, a 3.0-litre six-cylinder diesel engine with mild hybrid technology is on offer in three states of tune. The base D250 produces 245hp and 600Nm torques, while the top-spec D350 variant manages to churn out 345hp and 700Nm torques.

For petrolheads, two engine options are on offer. The first is a 3.0-litre six-cylinder petrol engine with mild hybrid technology available in two states of tune - a 355hp P360 and a 394hp P400 variant with 500Nm and 550Nm torques, respectively. The second constitutes this Range Rover's party piece with a new 4.4-litre twin-turbo V8 petrol engine producing 522hp, the first Land Rover to deploy the same. This shall power this luxury SUV to a 155mph (or 250kph) top speed and a 0-100kph sprint time of 4.4 seconds.

As expected from a Range Rover, a standard all-wheel-drive system sees its application here, in an intelligent guise. The intelligent system can send torque to where it's needed the most as the Terrain Response 2 system tailors the driving dynamics to suit the conditions without any driver input. Easy manoeuvrability can be expected, thanks to the all-wheel steering system, while independent air suspension should ensure utmost ride comfort.

In the 2022 Range Rover's list of many firsts, a brake-by-wire should be added. What makes it special is that it combines next-generation braking technology with active brake cooling, which opens vents to cool the brakes, a world-first according to Land Rover.

Land Rover has gone a mile ahead to provide a heightened level of personalisation. The highest one can go is by opting for a four-seat SV Signature Suite configuration, featuring an electrically deployable table for the rear passengers. Expensive materials such as ceramic and wood veneers can be found all throughout the cabin, including the gear lever as well as the armrests. Similar exquisite paint finishes such as Anthracite metal plated and Graphite Atlas paint are offered for the exterior paint. But the unique identifier of the SV variant would be a blacked-out Land Rover badge on the grille and a white ceramic SV roundel on the tailgate.

What Is Inside Anthony Joshua OBE's New Land Rover Car

RANGE ROVER WESTMINISTER, IS THIS THE BEST VERSION TO BUY?