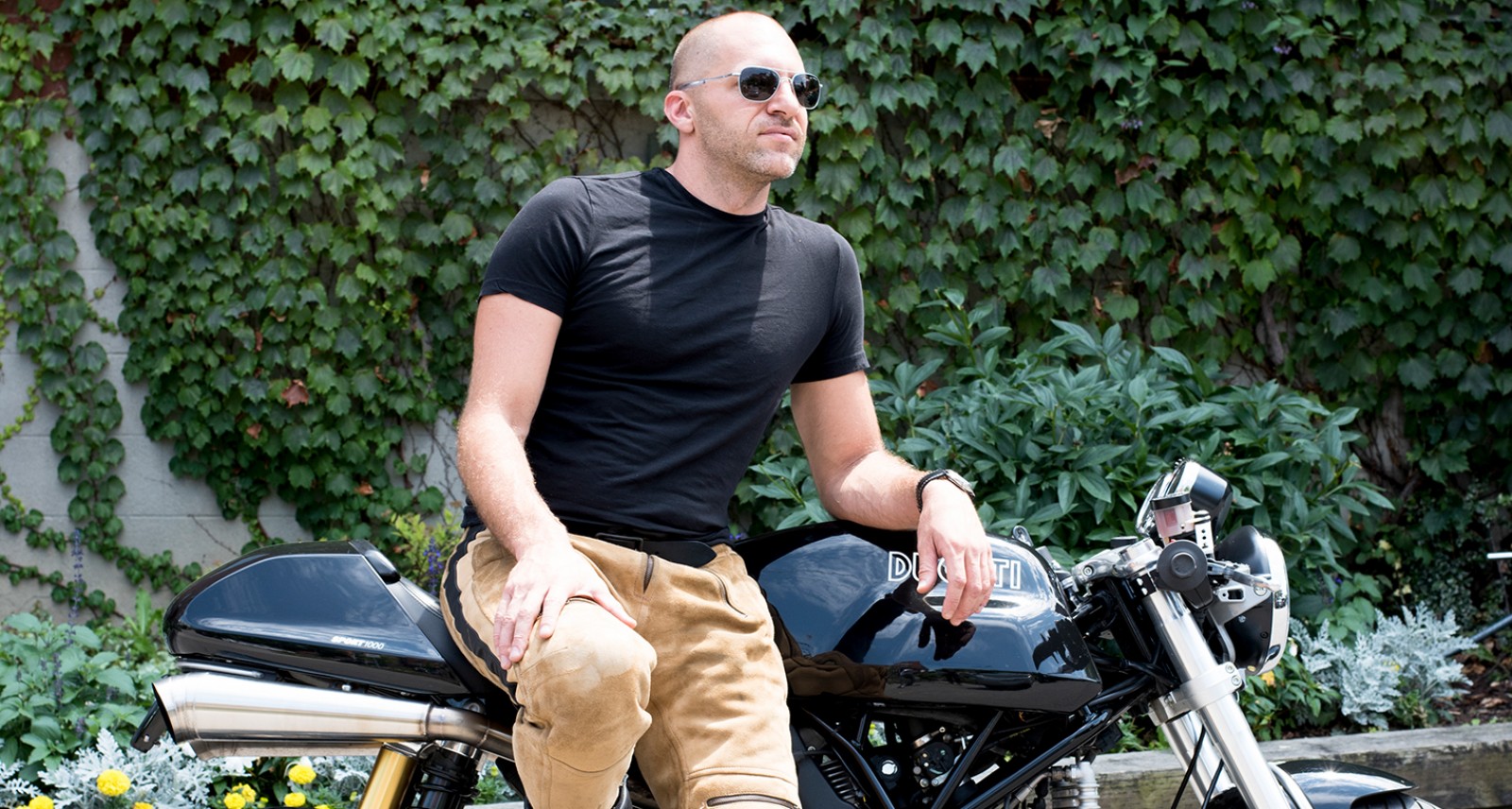 Treeline Catering founder Joshua Hendin’s love of motorcycles has occasionally come in handy during business hours. One afternoon, his team was preparing lunch for U2 to enjoy aboard their private jet when the band’s assistant passed along a special request: Bono was asking for “actually homemade” chicken soup. Hendin hung up the phone in Treeline’s Etobicoke kitchen, placed another call to his mother, and then zipped off on his Aprilia RSV4 to meet her in her St. Catherines home. A few hours later, he was back — toting two mason jars filled with made-by-mom broth.

The 40-year-old entrepreneur, who has grown a business that counts Cirque du Soleil and Telus as clients, currently boasts a collection of four bikes: the Triumph Daytona 675SE, a Ducati, a Suzuki GSXR600, and a KTM XC450 dirt bike. Each one is tricked out to the exacting tastes of its passionate owner. His Ducati, for example, has been outfitted with a locally fabricated exhaust, and had several pieces of its frame and horns shaved off to streamline its look. When it’s revved up, the noise is absolutely deafening.

Hendin often needs the sound of a loud engine to drown out the stresses that accompany running his own business. But he appreciates that his self-directed career gives him the freedom to plan high-adrenaline experiences in his downtime. Most recently, that meant a moto adventure in Marrakesh. En route to the coast on the back of an Africa Twin, Hendin maneuvered through spice markets and navigated along winding roads marked by indecipherable street signs. “In North America, we’re so protected,” he says. “In environments like that, there are no guardrails. You have to be aware. But it’s a rush to solve problems that aren’t catering problems.” Of course, not all of his bike trips are so high-speed. Hendin and his close group of friends, a Toronto biker gang of fellow entrepreneurs, plan most of their rides around kitschy diners on the outskirts of the city. Occasionally, they’ll ride to Coachella down Route 66, stopping in scenic locales along the way to brew coffee from a Moka pot and conduct informal Hemingway book club meetings. “For me, bikes are just a thing to bond over,” he says. “After a road trip with someone, you’re always going to be connected to them.”

Hendin’s bond with his bikes runs similarly deep. His Ducati is a Sport Classic, a model that launched the same year he started Treeline. At that time, he was living across the street from a dealership and made regular visits to admire the bike — then too far out of his price range. Years later, after abandoning his Sport Classic dreams and moving on to own a variety of other models, the bike re-entered his life by way of a neighbour seeking a good home for one he was no longer riding. It was a classic case of a price too good to refuse.

Still, Hendin is quick to downplay the meaningfulness of this long-anticipated acquisition. “Obviously, I love anything that looks cool and goes fast,” he admits, “but it’s less about the bikes as material things and more about them being vehicles for an experience.” For him, a bigger sense of accomplishment comes from seeing past employees go on to achieve their own successes in the food industry, and from his philanthropic efforts building schools in Guatemala and Haiti.

On that note, Hendin is eager to steer into a quieter chapter of life. Having just bought a rustic cabin on Lake Rosseau — a stone’s throw from the historic Windermere House, to which Treeline supplies catering services — he’s started to enjoy still mornings on the water so much that he’s now hunting the Internet for a Scandinavian sailboat. He envisions himself sunbathing on the deck of some handsome ship parked off the coast of Montenegro. That is, at least until Bono’s assistant calls.

Moto culture can get a little jargon-y. Here’s some vocab to get you started.

Café: From “café racer,” a movement that started in the U.K. in the ’60s, when gentlemanly types stripped back their bikes to go faster, then stopped by the café (or likely the pub) to show off their work and socialize.

Tracker: These rides trace back to the board racers of the 1900s, which were bikes without brakes that raced on tracks made of wood. Sketchy. Trackers are stripped bare, all about speed, and defined by that big number plate.

Scrambler: Derived from the “scramble” races organized back before paved highways were commonplace. Basically, a stock bike modified to handle off-roading — but not made into a full dirt bike. A favourite of Steve McQueen.

Bratstyle: The birth of modern-day moto culture. Back when Orange County Choppers was making the bike equivalent of boob jobs, builders in Tokyo were stripping rides back to their pure essence. They called them brats.

Why Retro Tech Feels Decidedly of the Moment

What’s the Better Short-Haul Carry-On: a Wheeling Suitcase, or a Small Duffle Bag?