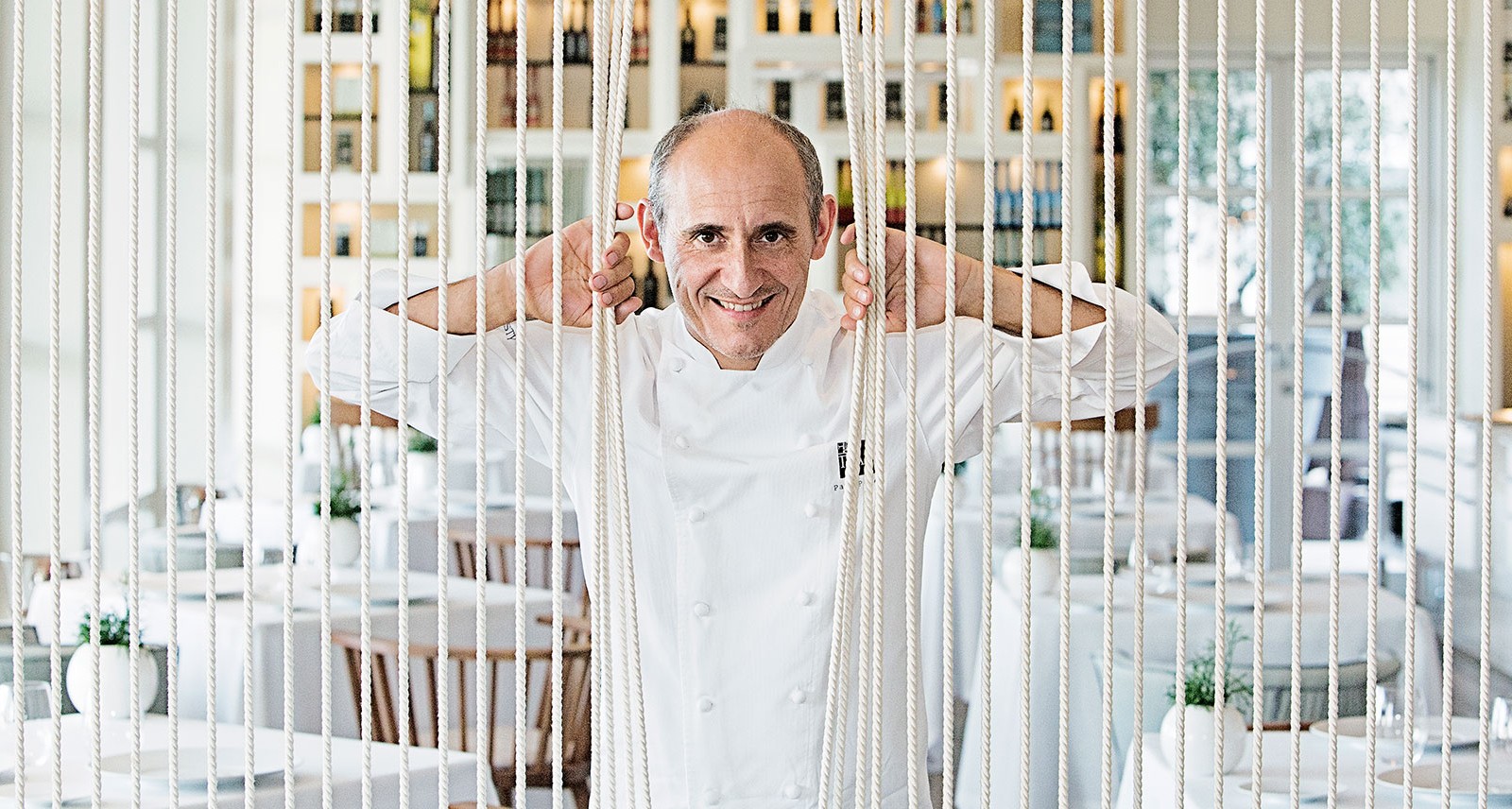 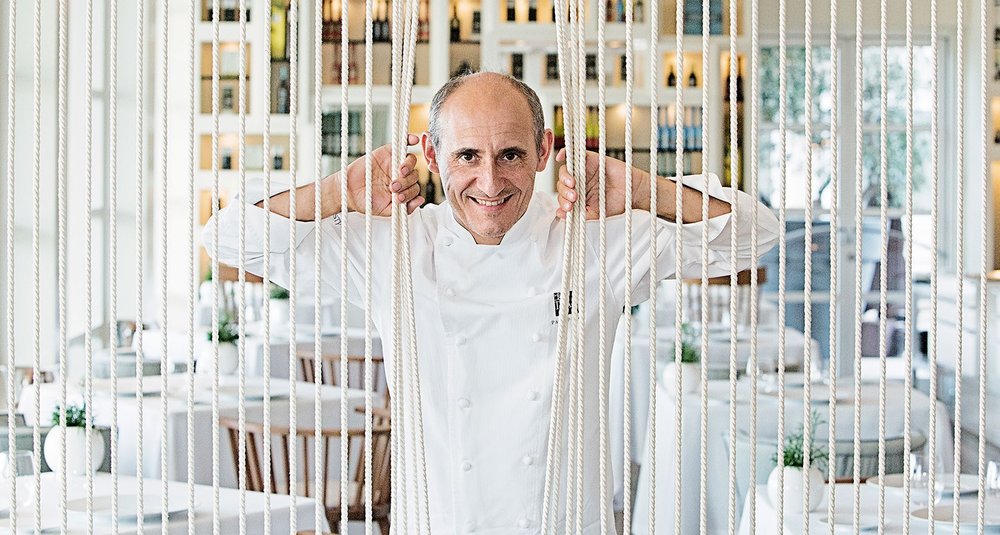 Paco Pérez is sitting in his car outside his restaurant and home in Llançà, a sleepy, whitewashed town wrapped around a yawning bay on the Costa Brava. He is talking about how he likes to cook, swinging his arms around like a frustrated orchestra conductor and raising his voice as he reaches the crescendo of each of his points.

“What the hell is unique food, anyway? I’m not sure it exists; everything comes from somewhere, is mixed with a particular ingredient or technique,” he pauses. “I don’t try to make unique food; I try to make interesting food, challenging food, food that tastes as good as it can.”

Outside the car, a string of chefs in light blue T-shirts rush between kitchens at the back of the restaurant, working violently: blood spurts, guts fly, bones crack, and whole vegetables become mountains of miniature cubes. In spite of the team’s constant movement, everything is controlled, as if routine had dug deep canals down which everything and everyone flows.

Pérez, 53, is short but lithe, with the bandy legs of an ex-footballer. He is bald and has skin as olive rich as the Mediterranean stereotype demands. Contrary to the image we all have, created by a food culture that celebrates chefs as artists and rock stars, he expresses himself with a genuine passion that somehow never wanders into pretension. He is direct, and he doesn’t look for meaning where none exists. Yes, food can be transcendental, but Pérez isn’t sure that high cuisine can be called art, or that the chef can rightly be called an artist. For him, food is primarily a biological need. It’s sustenance before anything else. And, in this sense, he believes that the world’s obsession with the gastronomic vanguard — the documentaries, the general adulation of the chef, and yes, the glowing magazine profiles — exaggerates everything. To his mind, it is still the creation of a client’s joy that is at the heart of cooking great food. Self-expression on the part of the chef is necessary, but ego isn’t.

“I’m a chef. My job is to give people a great experience and to show off my region’s products. But am I creating art? Am I recreating the flavour of a nation? God, I don’t know. I don’t think so.” 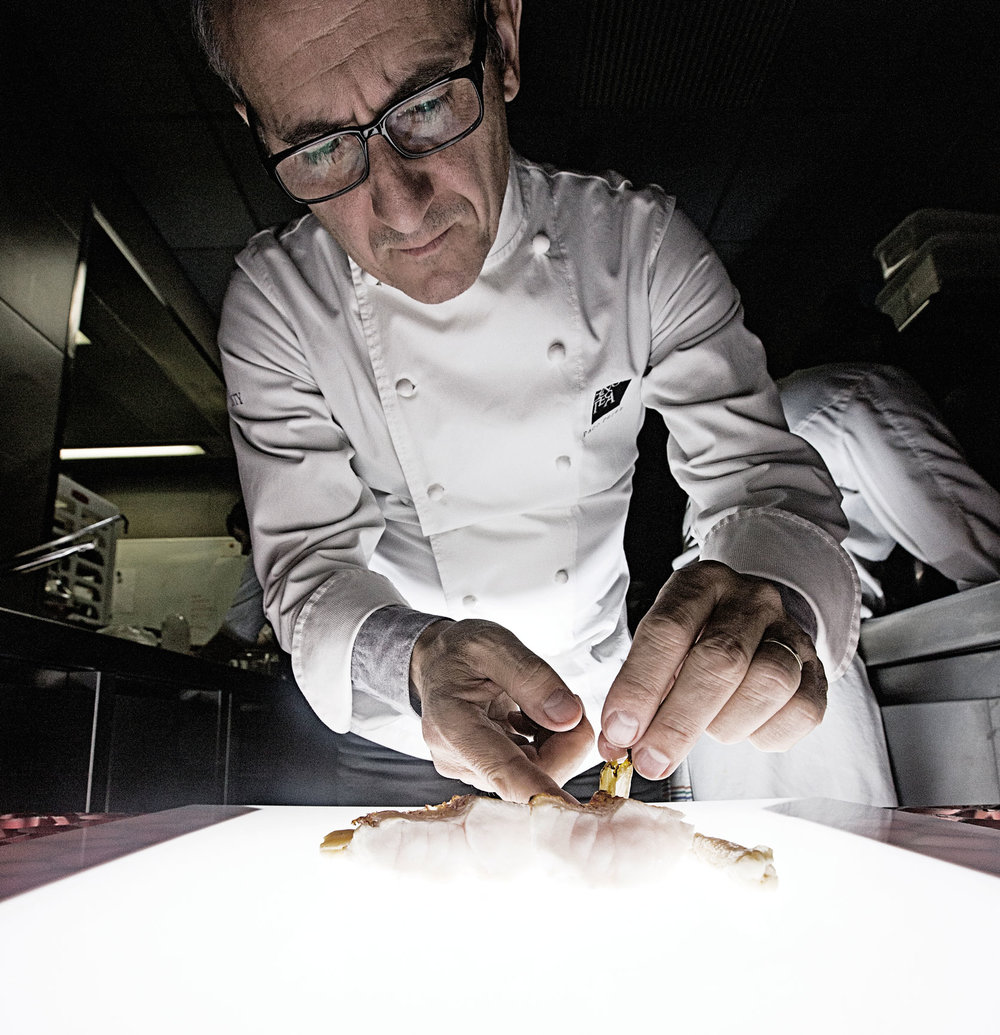 This ambivalence about his influence and importance almost seems quaint. But there’s a reason I’m in this sweltering Audi Estate speaking with him, while Luis Alonso, his senior chef and right-hand man, barks at suppliers on his mobile, checks in with employees, and reports back to his boss. The truth is, Paco Pérez is one of the greatest living chefs. He has seven restaurants in total, five in Barcelona, one in Llançà, and another in Berlin. Of these seven, three have Michelin stars — two at the Hotel Miramar; two at Enoteca, in Barcelona’s Hotel Arts; and one at Cinco in Berlin. It is a sum whose total makes Pérez the second-most Michelin-starred chef in Spain and among the best in the world. If any chef deserves renown, it’s him. But even in his home country of Spain — a place that loves its food — Pérez is nearly unknown. People may make pilgrimages to eat his food, but few know much about the prophet at whose table they are dining. It’s rare to find a man who eschews fame, even if he so richly deserves it. And so I’m travelling with Pérez to see why — even though the answer is so simple it sounds like spin — for him, it’s really all about the food.