With just 20 per cent of today’s jobs involving moderate physical activity, down from 50 per cent in 1960, 86 per cent of office workers risk being overweight or having at least one chronic health condition, says global ergonomics company, Humanscale.

Sitting for too long slows blood flow so oxygen doesn’t get to muscles effectively, the body shuts down and goes into hibernation mode, according to a study from Pennington Biomedical Research Centre in Baton Rouge, Louisiana. The average office worker sits for ten hours a day with even those who go to the gym for a few hours every night still at risk. Working out isn’t a solution, it’s simply not enough explains Grace Van Beusekom, Country Manager, Middle East & North Africa at Humanscale.

She said: “The truth is our bodies are designed to move for the full 16 hours of the day. At one point in time we would have had to run, climb and fight just to eat. Humans were not originally designed to have their meals put in front of them on a plate. We were not designed to be sessile organisms and many injuries we are starting to see have come as a result of being more sedentary than we were designed to be.

“Based on a multitude of research, from bodies such as Gallup and Cornell University, we believe balanced movement is the key to wellness at work. Helping to create an engaged, active workspace, our sit/stand products were specifically designed to counter-balance this new state of work environments. Switching between seated and standing postures throughout the day is not only good for energy and productivity, but for overall health. Studies have shown regular standing can burn calories, have a positive impact on well-being and prevent problems such as heart disease and high blood pressure.” 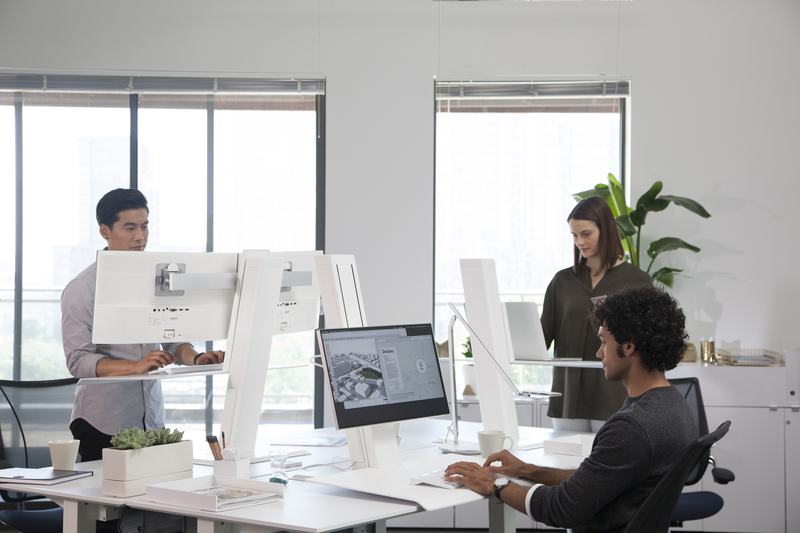 The simple act of standing up a few times a day and working while standing, increases the body’s metabolism just enough to bring it out of the potentially dangerous hibernation state. A recent study conducted by the Mayo Clinic has shown if you stand for just two hours throughout the course of the day, you can burn an additional 340 calories. The minimum we should be doing is standing every hour for at least three minutes. In doing this you reduce health risks and increase your productivity. Standing makes your body and mind more alert and you stay more focussed. Occasional standing makes us 87 per cent more energised, 75 per cent healthier, 66 per cent more productive, 62 per cent happier and 33 per cent less stressed.

The new age concept, of the sit/stand desk, has been picked up by progressive companies such as Google and LinkedIn and allows employees to have the choice to improve their overall health and performance. Businesses benefit as much as employees with 21 per cent increased productivity, 10 per cent better customer ratings, 22 per cent increased profitability and 37 per cent lower absenteeism (Gallup study).

Here Is the Luxe Dog Bed Your Best Friend Deserves

Can You Explain CrossFit’s Popularity Over the Last 18 Years?

The Highs and Lows of CBD, THC's Mellow Little Brother

Peace Out: A Beginner's Guide to Achieving Mindfulness

Why It's Time Your Face Got an Oil Change

Give Me 3 Essential Bodyweight Exercises