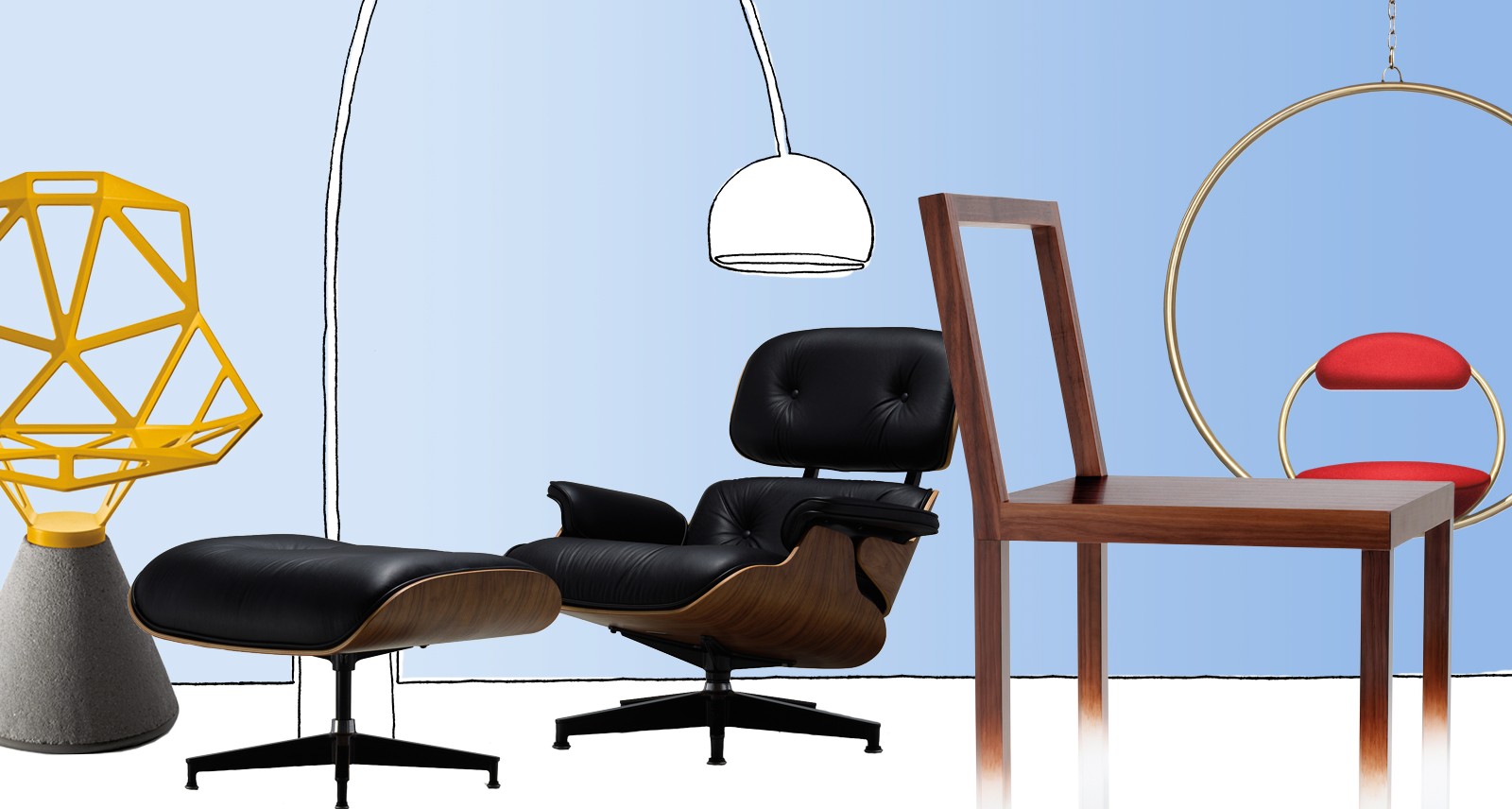 Marvel at the well-designed chair. Whether it’s a mid-century modern icon or a cutting-edge creation, somehow the chair, through an impeccable mélange of practicality and aesthetics, has become the ambassador for the design world as a whole. To quote designer George Nelson, “Every truly original idea — every innovation in design, every new application of materials, every technical invention for furniture — seems to find its most important expression in a chair.”

There are, of course, other items that most of us interact with on a daily basis — the bed, for example, with which we spend approximately a third of our lives, or the desk, which feels as though it occupies even more of our time. Both would certainly be subjects worthy of exploring to understand better the benefits of quality design. But it’s the seeming simplicity of the chair and its requirements that sets it apart.

Nowhere else in the world of furniture design do we see function and form so seamlessly married, even in the barest-of-bones incarnation. Its entire existence is rooted in this duality — and to a certain degree, it’s been like that since the 16th century.

When you get into the history of the chair, one word inevitably comes to mind: throne. In fact, before the 16th century, the chair was synonymous with power, with gold-gilded seats in Egypt and garishly ornate medieval thrones depicting kings and leaders (this idea of the chair as a status symbol — a literal seat of power — sticks around to this day in academic departments, boards of directors, and the House of Commons). Over time, however, chairs became less ornate, slowly migrating out of palaces and aristocratic drawing rooms and into the lives — and under the seats — of everyday people, who had previously been content to perch on backless stools. Once we developed a taste for sitting like kings, the rest is, well, history.

By the time of the Industrial Revolution, when machine-made wares replaced expensive and time-consuming handcraftsmanship, chairs became much more affordable — and entirely, unstoppably ubiquitous.

But attention to the form side of design was nothing compared to what it is today. Starting in the 1900s, the focus changed from simply having a chair in the home to having the most beautiful — or creative — option possible. New technologies becoming available at this time led to innovative new forms and materials; moulded plywood, plastic, and fibreglass, for example, afforded new shapes and styles, while steel, aluminum, and glass were increasingly easier to work with. Upholstery options multiplied at an alarming rate; the usual leathers and wools were joined by synthetics like vinyl, nylon, and polyester. With these new materials readily available, the demand for different styles and aesthetics has also grown, including heralds to baroque and Greek motifs alongside never-before-seen otherworldly forms. In a way, it’s a callback to the thrones of 400 or 500 years ago — except now, the luminaries aren’t sitting in them, they’re designing them.

Great art often comes from constraints. Whether it’s crafting a poem with a specific rhyme scheme or a visual artist choosing one particular medium or style, limits can — sometimes counterintuitively — increase creativity and push innovation forward. It’s not surprising, then, that the chair would become the de facto calling card of the brightest designers. The balance of form and function results from the interplay between freedom and constraint. A chair can be almost anything, so long as it’s still a chair.

Many of the most important chairs we know today come from the mid-20th century, when big names like Charles and Ray Eames, Le Corbusier, and Arne Jacobsen (not to mention Canadian names like Jacques Guillon and Russell Spanner) began to rethink the basic form of the chair and its relationship to the sitter. Using new materials and manufacturing techniques to create ethereal, sculptural, and sometimes near-abstract pieces, they forever changed chair design for future generations by giving equal attention to both sides of the chair’s dichotomy: the form and the function. Even now, the approach hasn’t changed: take this simple, pragmatic piece of furniture and make it incredible. In modern design circles, with the seemingly endless options of tools, technologies and materials, this could mean everything from back-to-basics handmade wood creations to 3-D printed designs that involve simply inputting a drawing into a computer and letting the machine do the rest. When you look closely at the seemingly disparate approaches, however, a singular goal becomes clear: perfection.

“Chair design seems to be the elusive goal of many furniture designers. They are relatively small and challenging, and there are so many of them designed throughout history,” says Toronto designer Jason Dressler. “Some say there are too many, so why bother? But that doesn’t stop us from trying to get one right. The chair is something that requires as much thought as larger items or spaces, and many inspiring designers and architects have put their minds to them. It’s the challenge of achieving a level of comfort that can be sustained when using them, while also creating something unique that someone will want in their home and to keep for generations.”

In short, for virtually any designer from the past two centuries, the chair is a challenge that is impossible to ignore — and the result of that is a fascinating parade of creations that provides a glimpse into each design- er’s mind, not to mention their own personal take on that long-standing dream, the flawless combination of function and form. 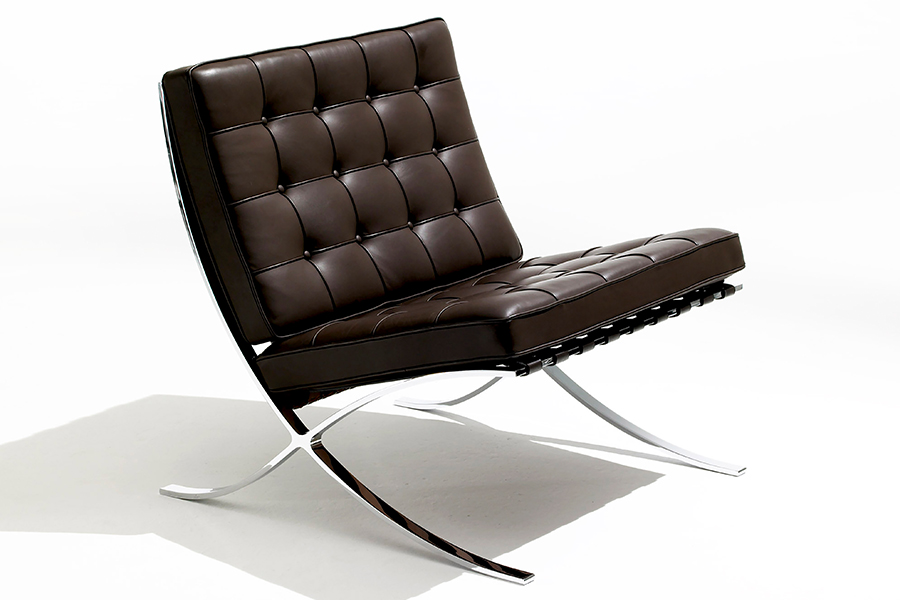 An early exploration into the virtues of chromed stainless steel, Ludwig Mies van der Rohe’s iconic leather chair was originally created for the German pavilion at the 1929 International Exposition in Spain before Knoll started manufacturing it in the 1950s. knoll.com

Designed in 1859 by a German-Austrian cabinetmaker, the 14 Chair is still in production today by Thonet. An early example of bentwood (the six pieces of beech wood were heated to 100°C and curved in moulds), it also comes flat-packed for easy transportation. thonet.com 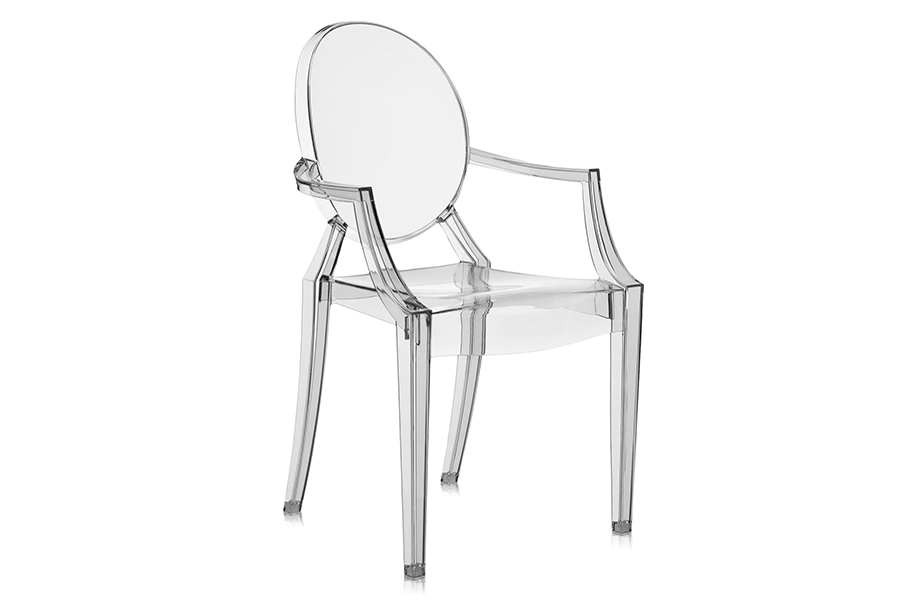 One of the most widely bought chairs of all time, the 2002 Louis Ghost Chair by French designer Philippe Starck for Kartell emulates the wooden Louis XV armchairs of the 18th century in transparent injection-moulded polycarbonate. kartell.com 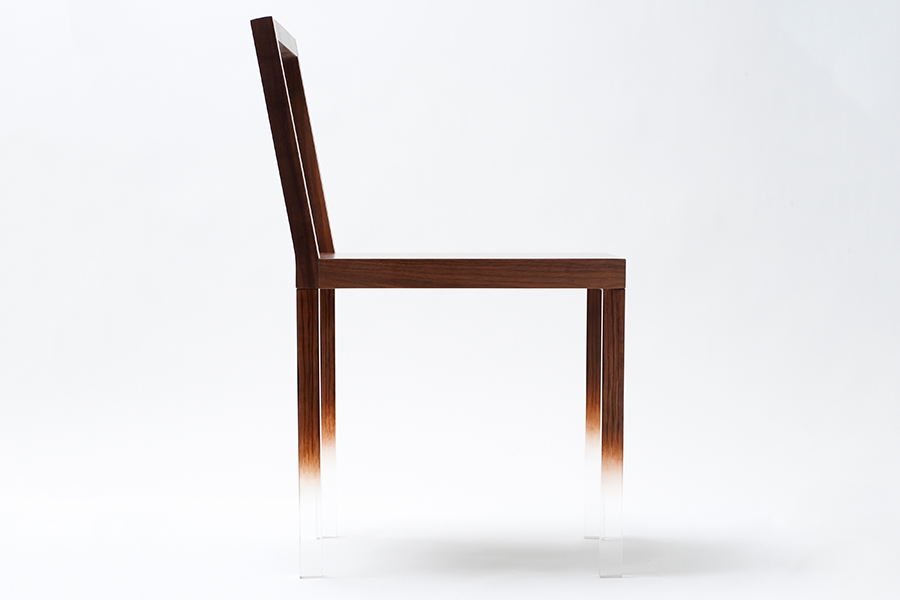 A prime example of the Japanese design studio’s ultra-minimalist-yet-playful approach to design, the Fadeout Chair of 2009 combines a basic wooden frame with clear acrylic legs. The transitions between the two materials were painted by expert craftsmen to give the effect of the wood grain simply fading away. nendo.jp 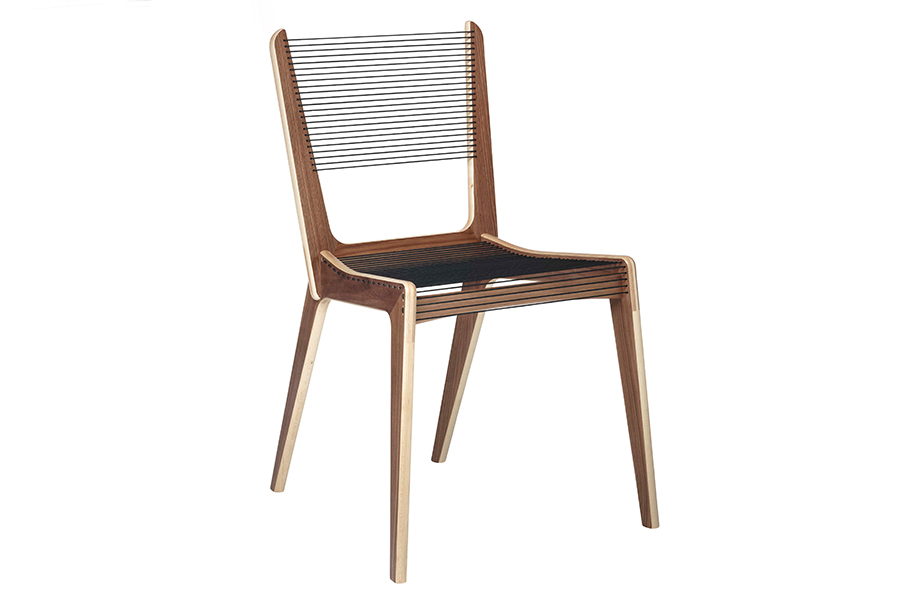 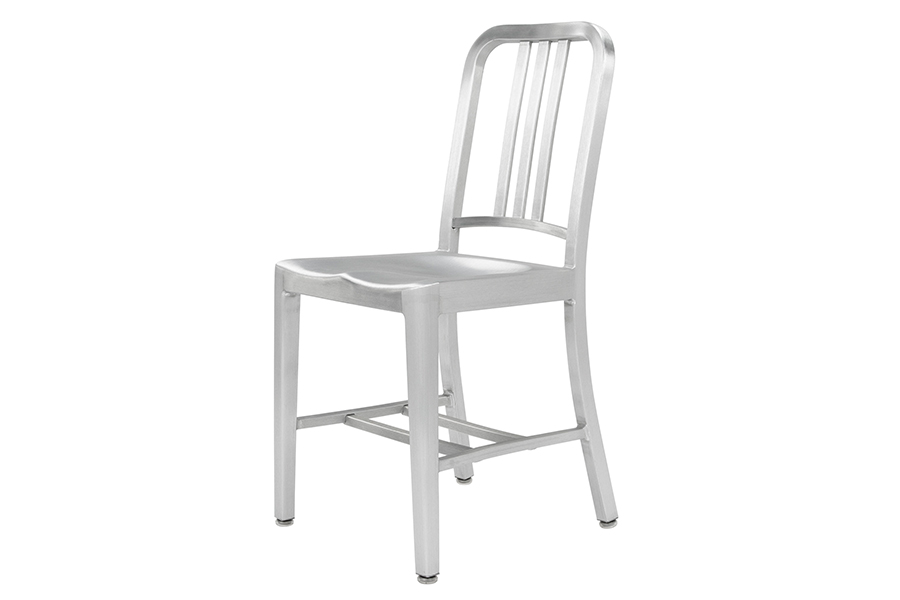 The American brand’s first chair in 1944 was originally built for use on warships and submarines, hence the name. The design boasts a 77-step manufacturing process that starts with soft recycled aluminum that is then hand-formed, welded, tempered, and anodized. emeco.net 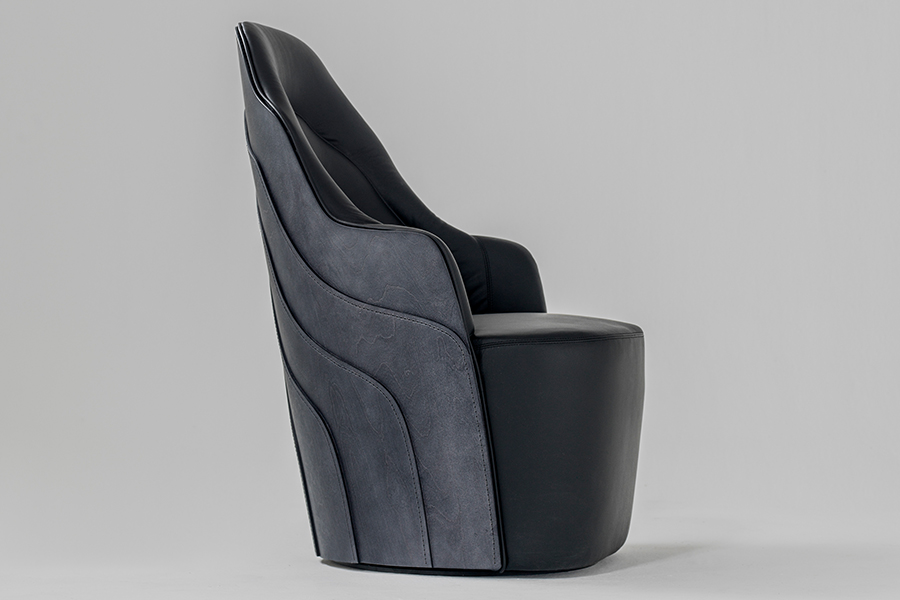 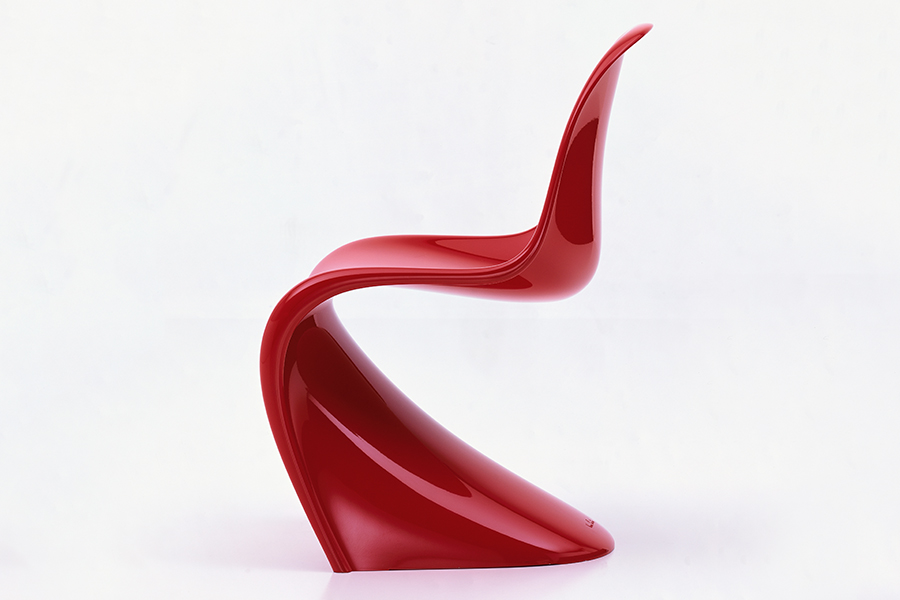 Danish designer Verner Panton designed the Panton Chair in the early ’60s, after ample experimentation with the possibilities of plastic. The stackable chair was picked up by Vitra and officially launched in 1967; originally made in a high-resilience polyurethane foam, it’s now offered in more durable polypropylene. vitra.com 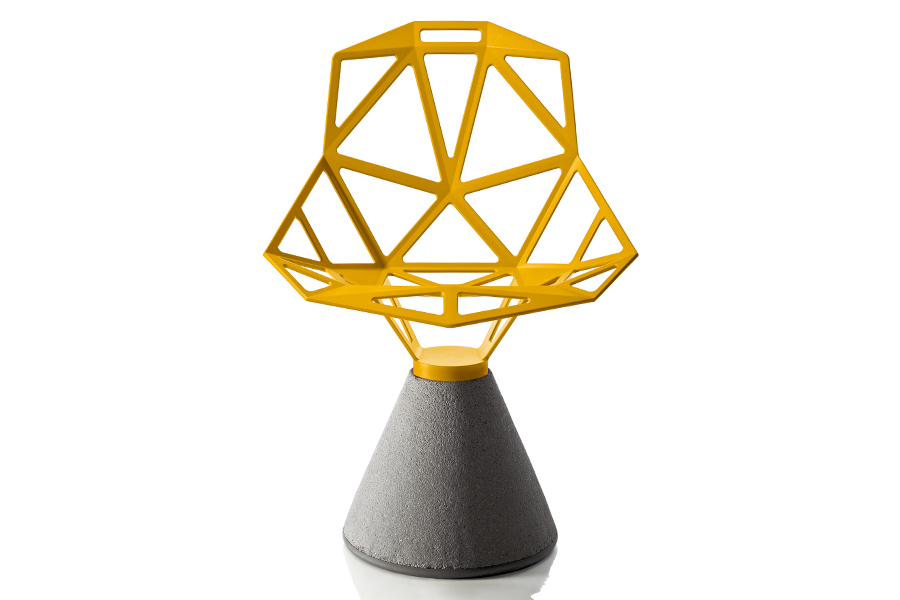 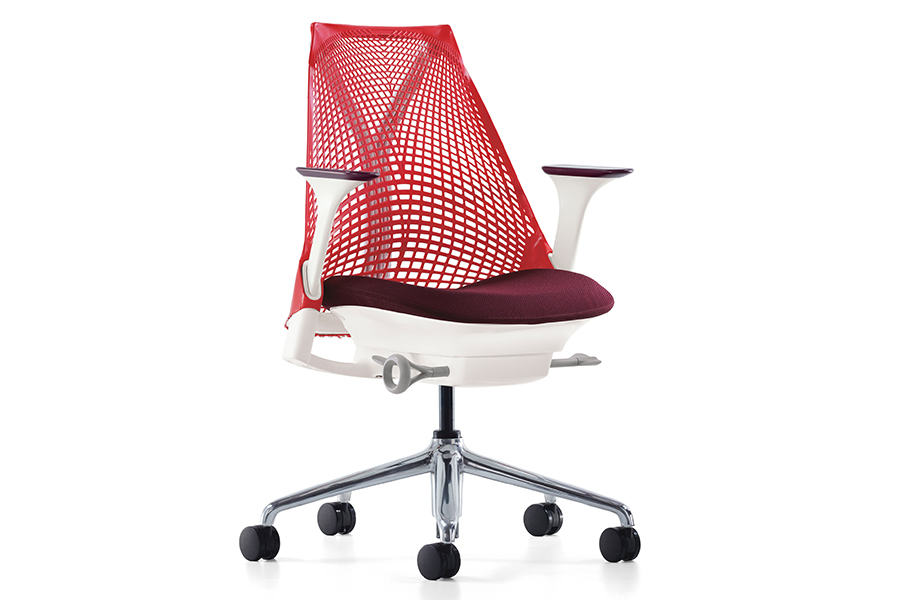 Herman Miller spent years developing a $400 task chair that lived up to the brand’s other options at higher price points; in 2010, they finally launched the Sayl chair, by Yves Behar, which features an unframed “3-D Intelligent” back made from a proprietary material. hermanmiller.com 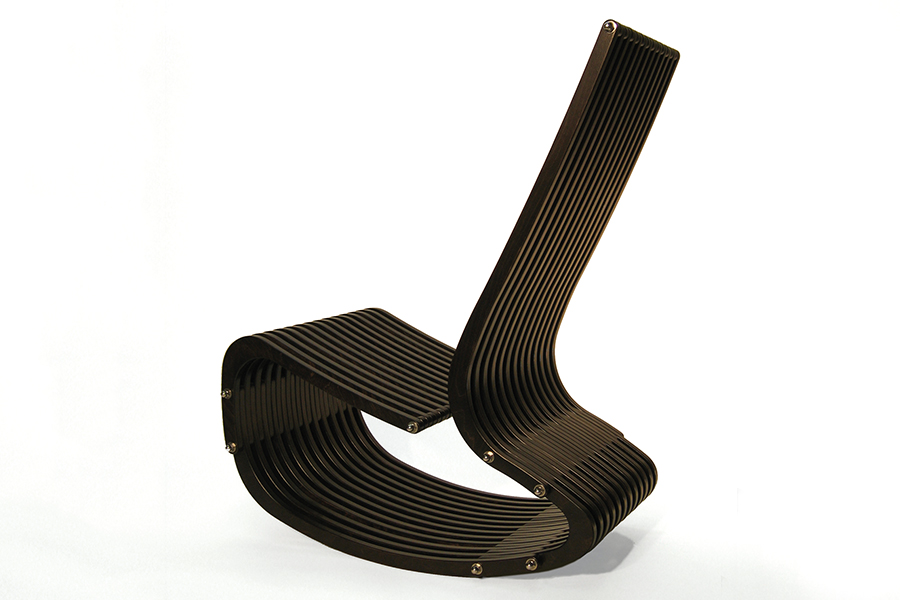 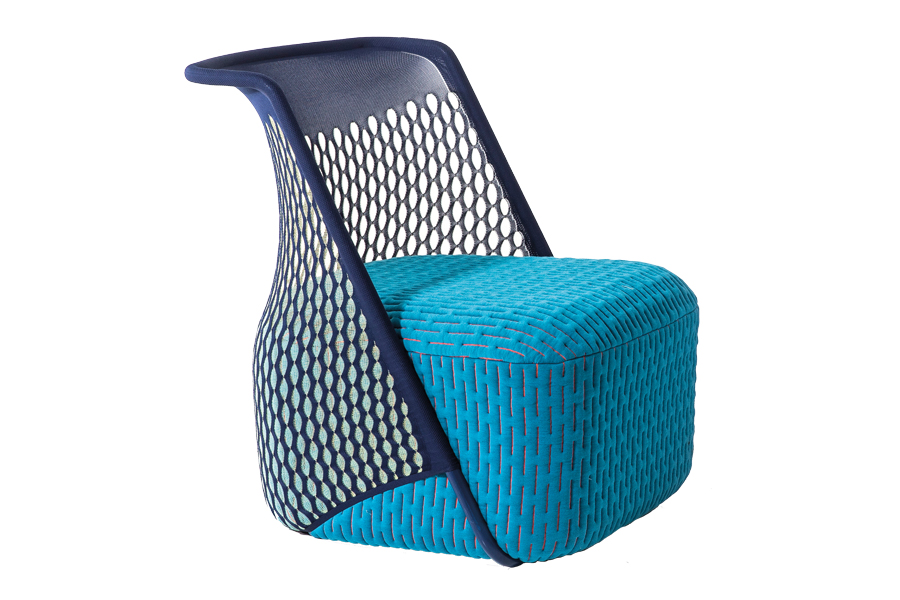 Earlier this year, state-of-the-art digital knitting was employed to make the stretch-mesh material in Benjamin Hubert’s Cradle chair for Italian brand Moroso. An Austrian company created the 3-D fibre to be extra strong but still lightweight, like a hammock. moroso.it 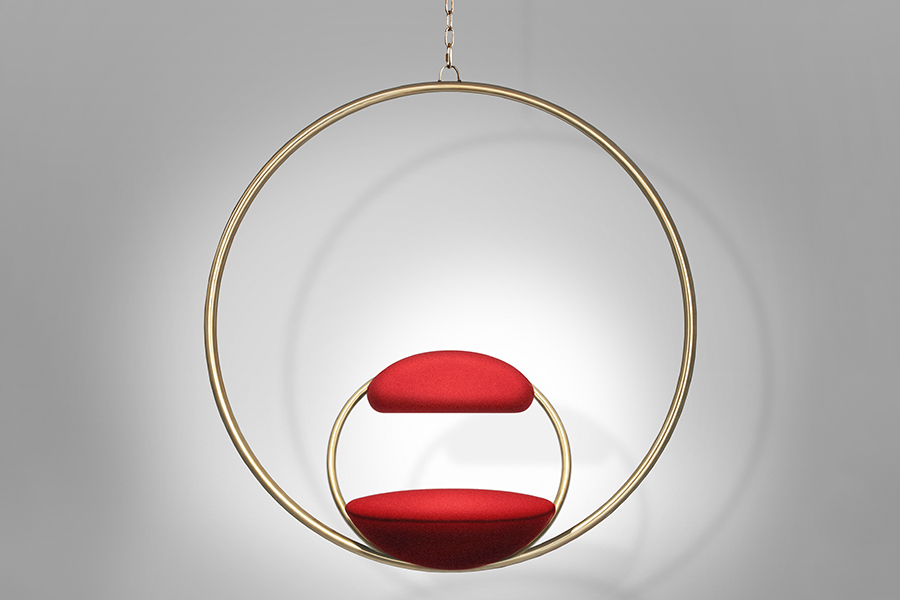 The most recent chair designs question every element of the traditional form; a perfect example is British designer Lee Broom’s Hanging Hoop Chair from last year, which does away with legs entirely in favour of two metal circles and an upholstered seat. leebroom.com 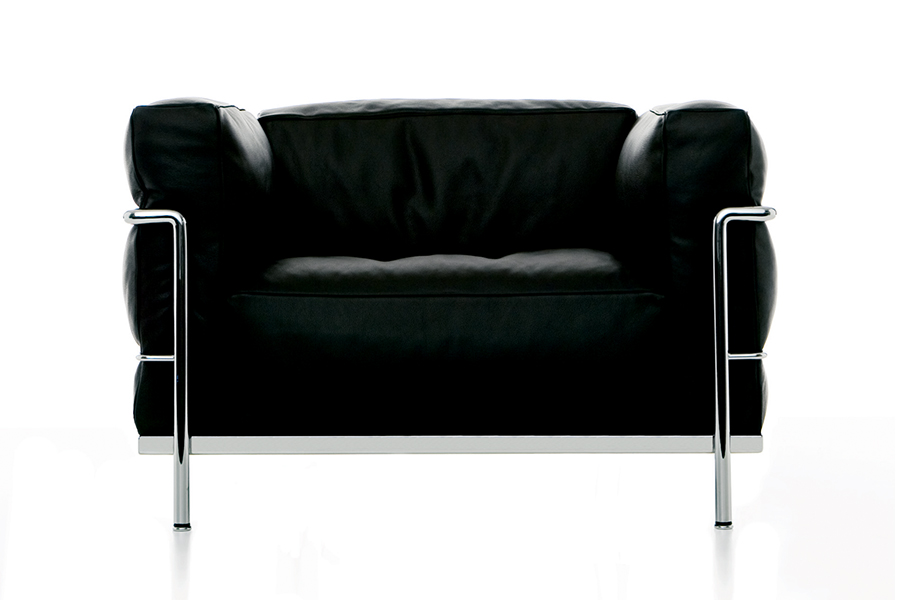 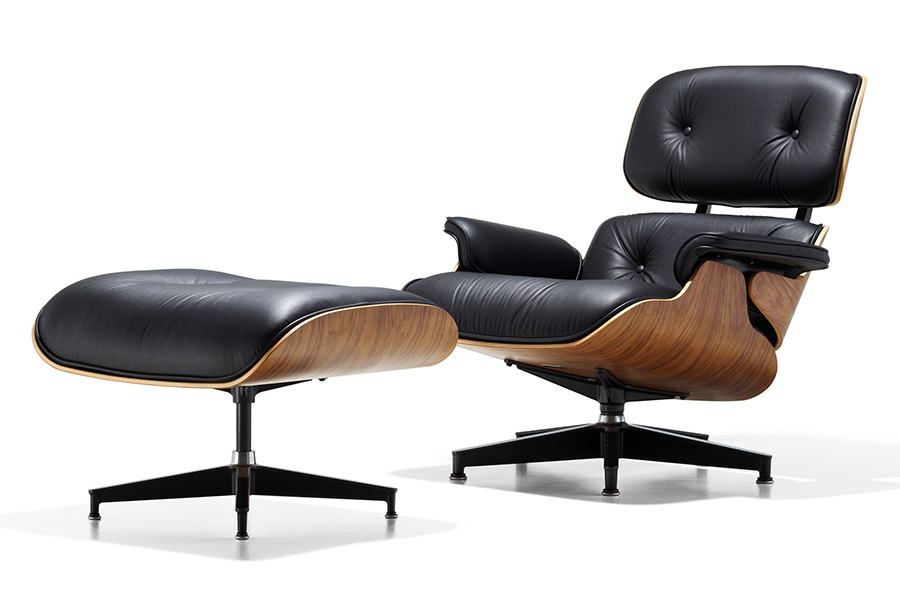 You Need Some of Zaha Hadid’s Last Furniture Collection