Detroit is taken over by Amazon in architecture student Cody Seipp's conceptual project, which envisions the US city in 2051 following a major redevelopment orchestrated by the retail giant 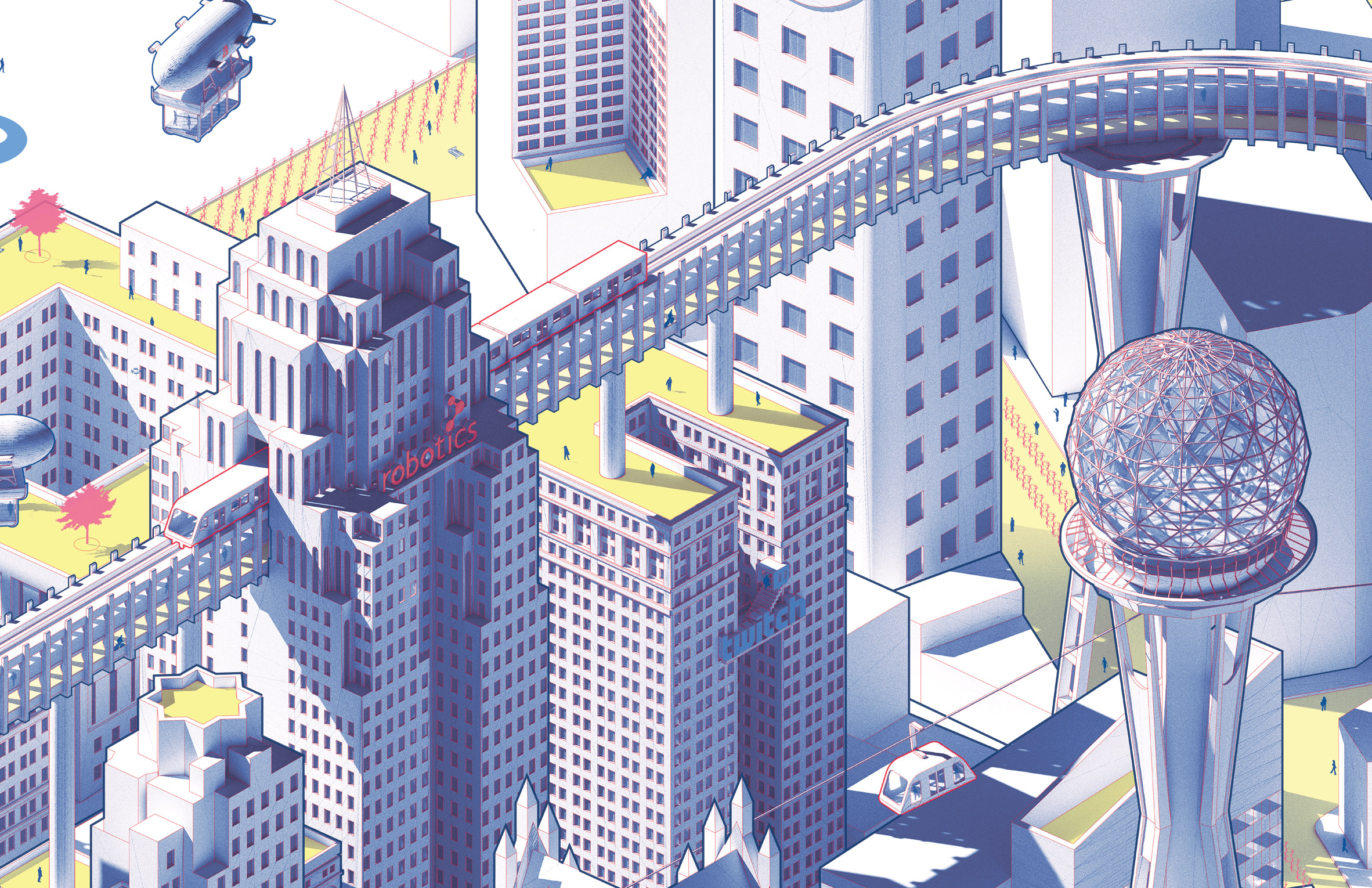 Created by Seipp as his final project at New York's Rensselaer Polytechnic Institute, Expo '51 Detroit imagines the US city 33 years after it was acquired by Amazon in 2018.

It offers an alternative outcome to real-life events. Detroit was among those bidding to become home to Amazon's second headquarters in North America, nicknamed HQ2, following its first in Seattle, but lost out in the shortlisting earlier this year.

In the fictional narrative, the city won the bid by giving Amazon full control "over Detroit's policies, activities, and redevelopment operations" in return for major investment. Designed by a made-up team of designers and urban planners called UrbEnact, with think tank Detroit Future City (DFC), Seipp's scheme aims to better integrate transit and the built environment with the community and public space. 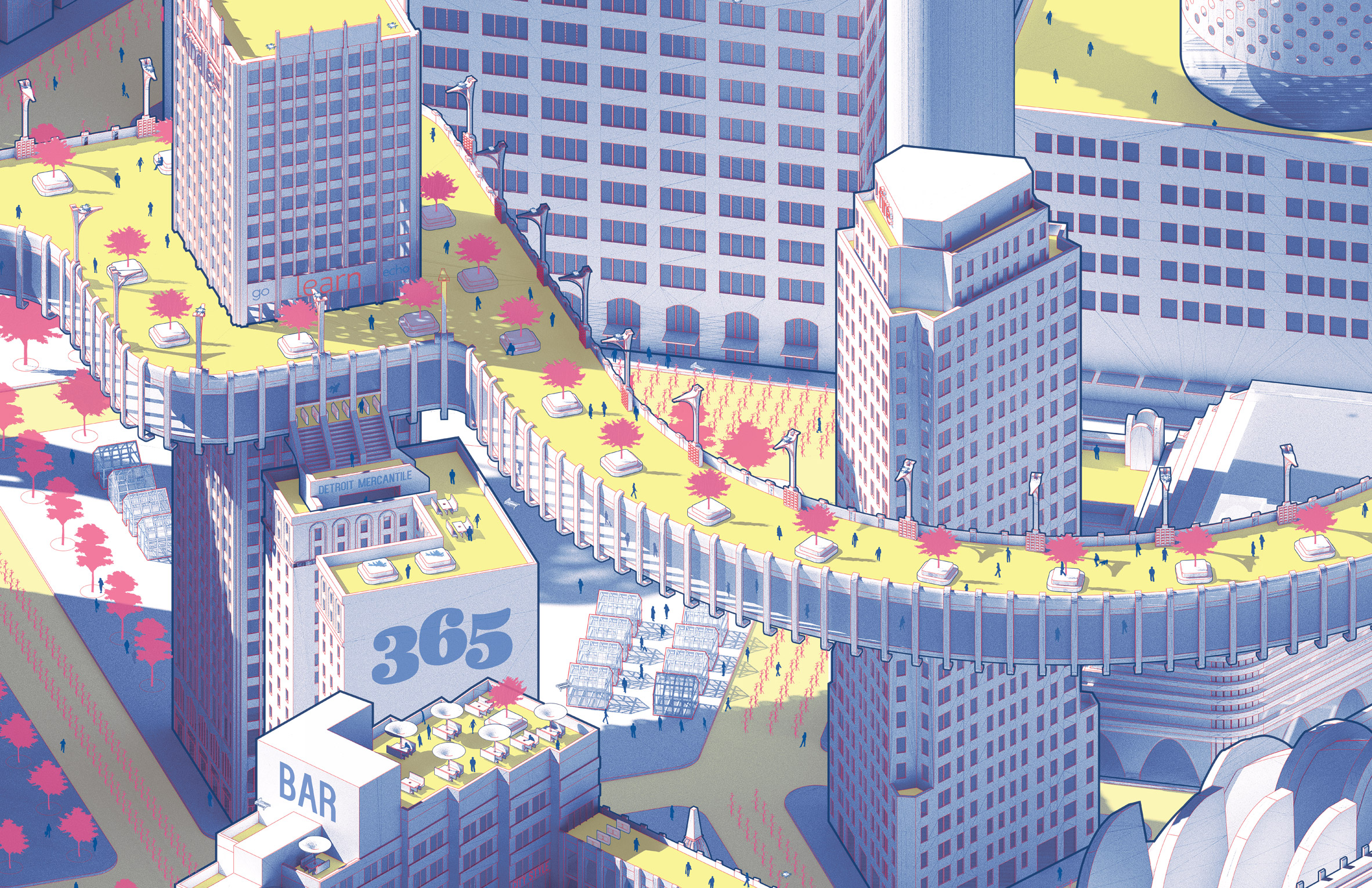 "Over the next few decades, Amazon orchestrated a redevelopment scheme that rejects automotive transit and isolated programming in favor of public space, urban agriculture and mixed-performance buildings." 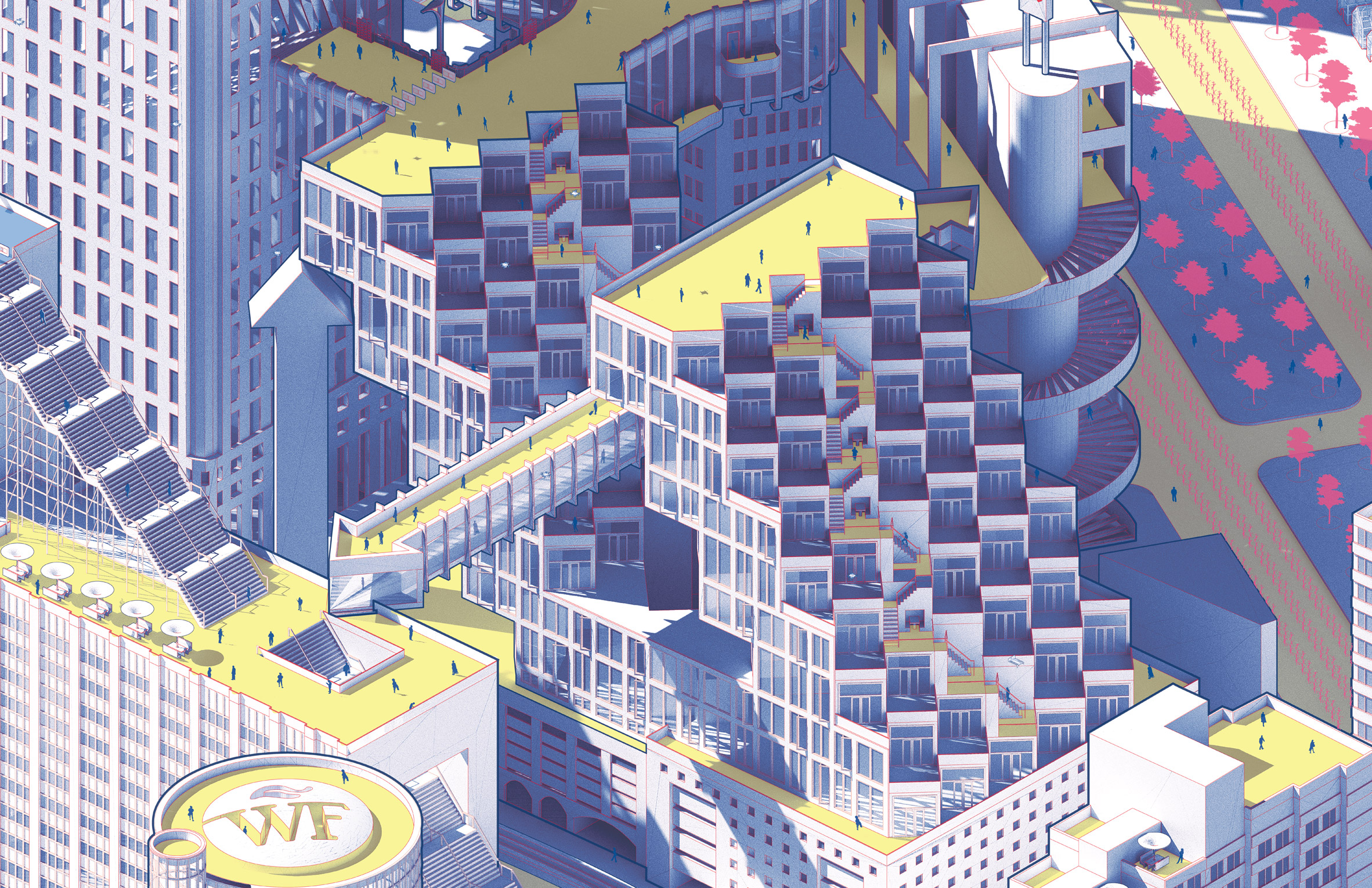 "Over the next few decades, Amazon orchestrated a redevelopment scheme that rejects automotive transit and isolated programming in favor of public space, urban agriculture and mixed-performance buildings."

The built environment comes in a range of shapes, from towers with angular tops to buildings punctured with huge, irregular holes.

Seipp suggests that existing structures will become integrated into the activities of Amazon's headquarters. A number are topped with Amazon's logo, one is titled "Prime" as a reference to the company's subscription plan, while another is home to Whole Foods – the supermarket chain that it recently bought. Amazon subsidiaries like Audible, Air and Kindle are also featured. 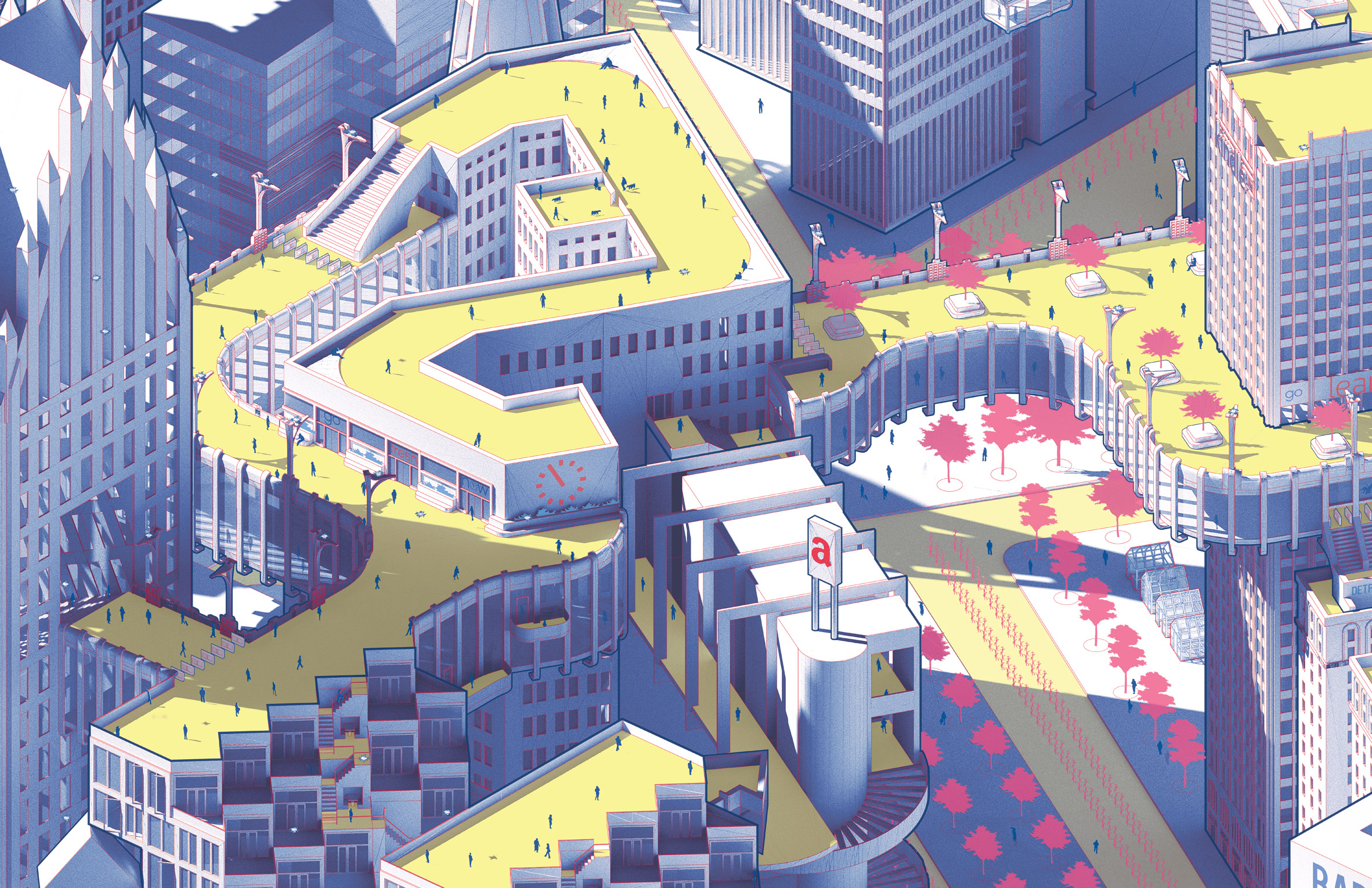 Detroit would be particularly ripe for such extensive redevelopment, as the city suffered a huge decline in population after industries abandoned the city during the second half of the 20th century. Despite recent regeneration efforts, countless buildings around the city remain empty.

As an additional twist to Seipp's story, Amazon developed the city with the final goal of hosting the World Expo – an international exhibition celebrating the achievements of different nations – in 2051, 200 years after the first was held in the United Kingdom. 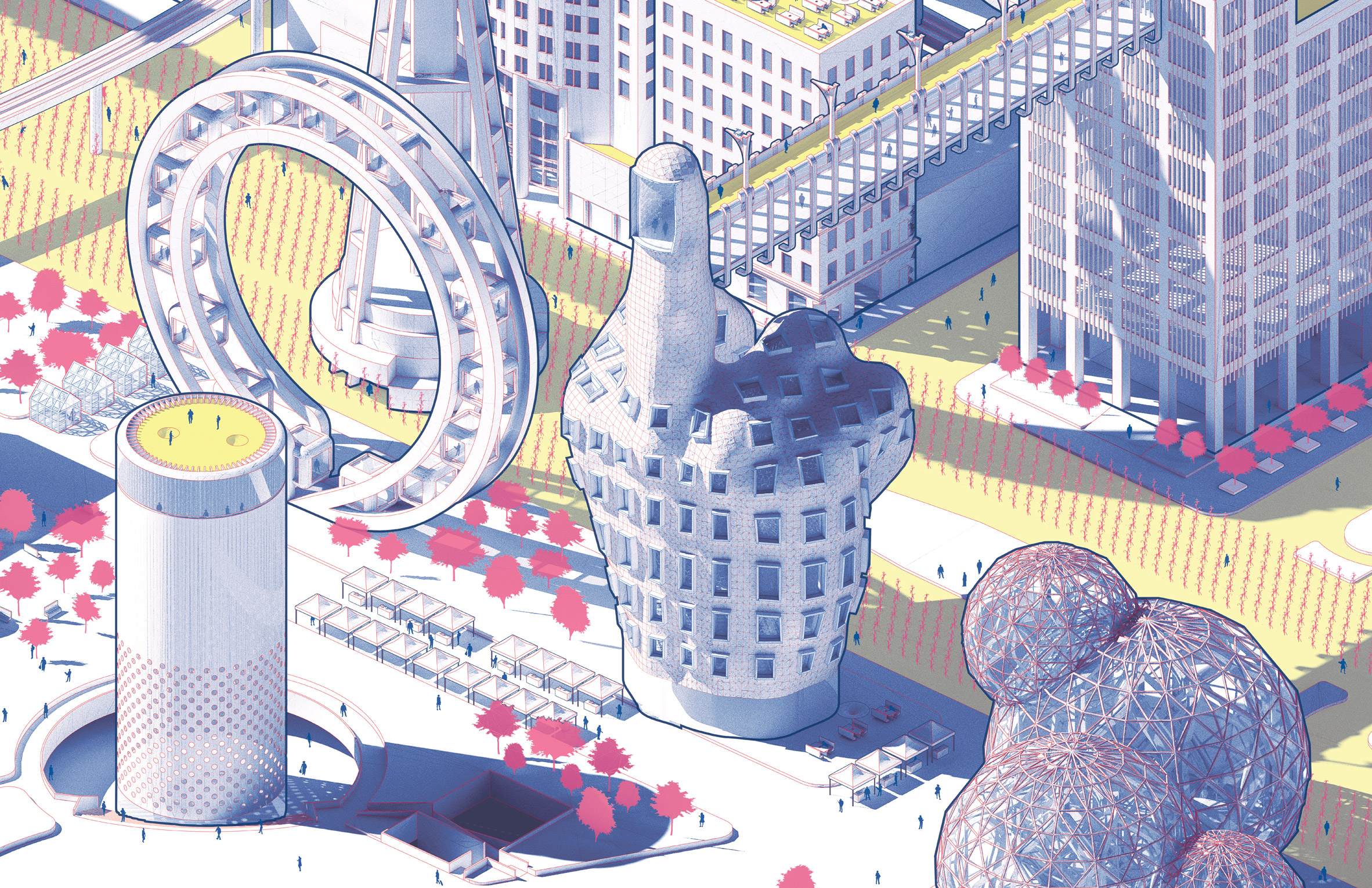 With over 150 million visitors expected to attend, the company has employed well-known architects to develop a number of structures for the city, with many referencing those from years before. These include a Ferris Wheel, similar to the observation wheel built for the 1893 exposition in Chicago, and a tower that resembles Seattle's Space Needle completed for the 1962 event.

"The city became a collection of some of the most daring pavilions in the history of the World's Fair, most of which paid homage to previous architectural feats of the fair," said Seipp. 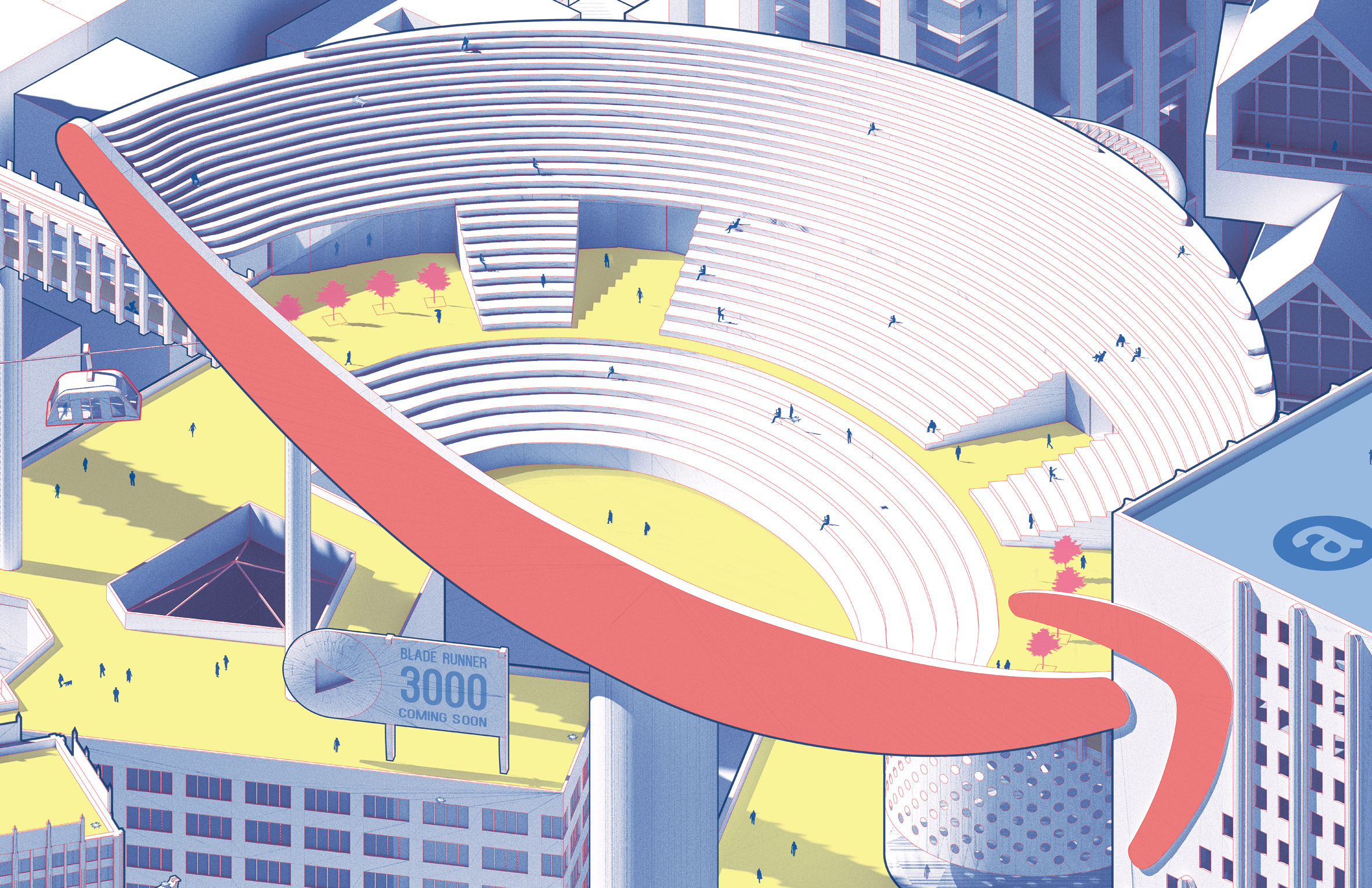 Among the other unusual designs is a bulbous building that has a tower protruding from its top to look like a hand giving the finger, and another comprising several glazed spheres.

In reality, Amazon has yet to announce where it will build HQ2. In an Opinion column for Dezeen, Aaron Betsky concluded that wherever secures that hotly contested development might not benefit as much as the competitors currently think.

What My Cleto Reyes Boxing Gloves Taught Me About Authenticity

How Can I Identify a Worthwhile Airbnb?

Silicon Valley's Tech Giants Have Become Our New Gods. Here's Why It's Time to Defy Them

The 2018 FIFA World Cup Anthem Is a Straight-Up Jam