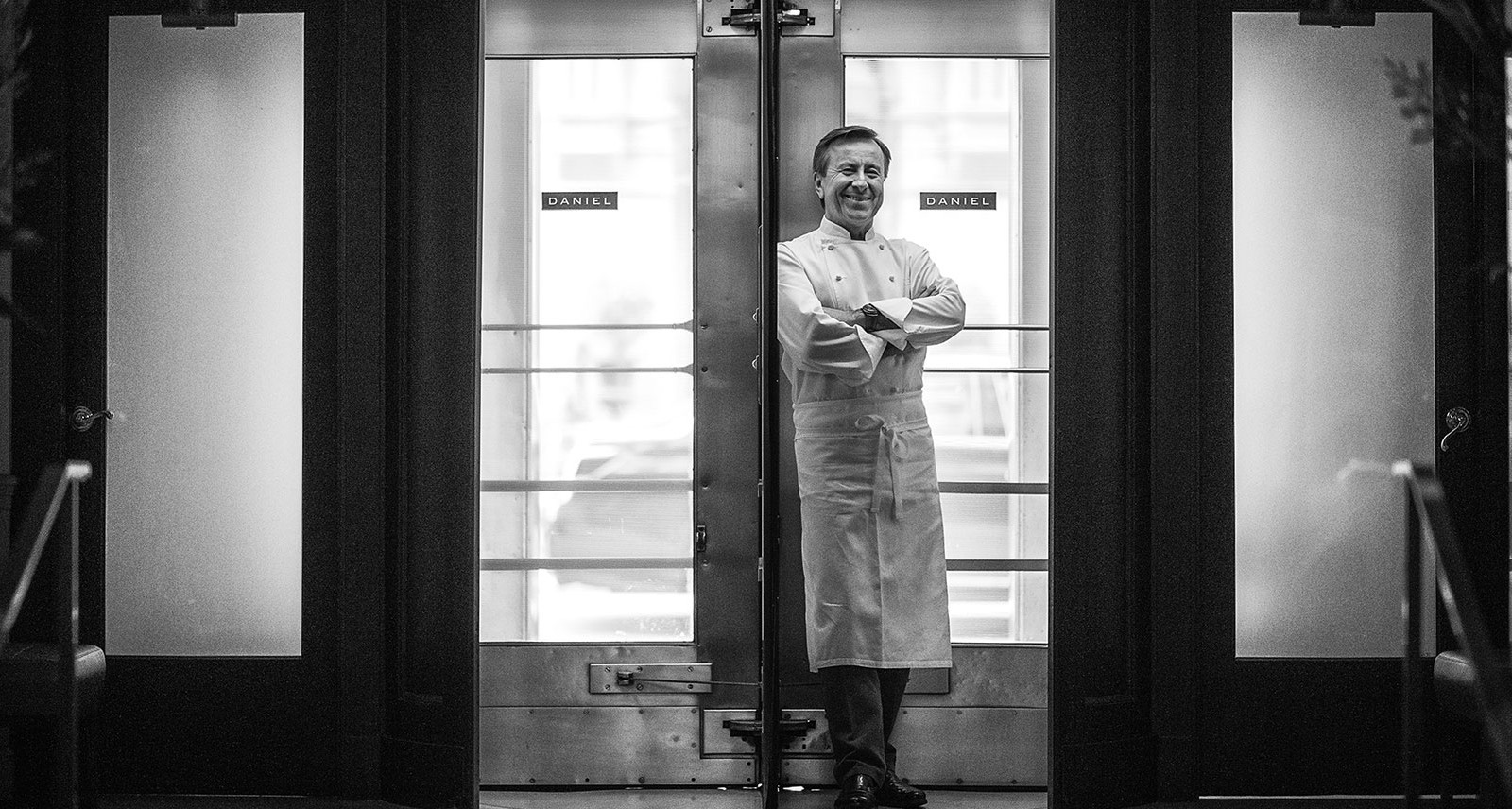 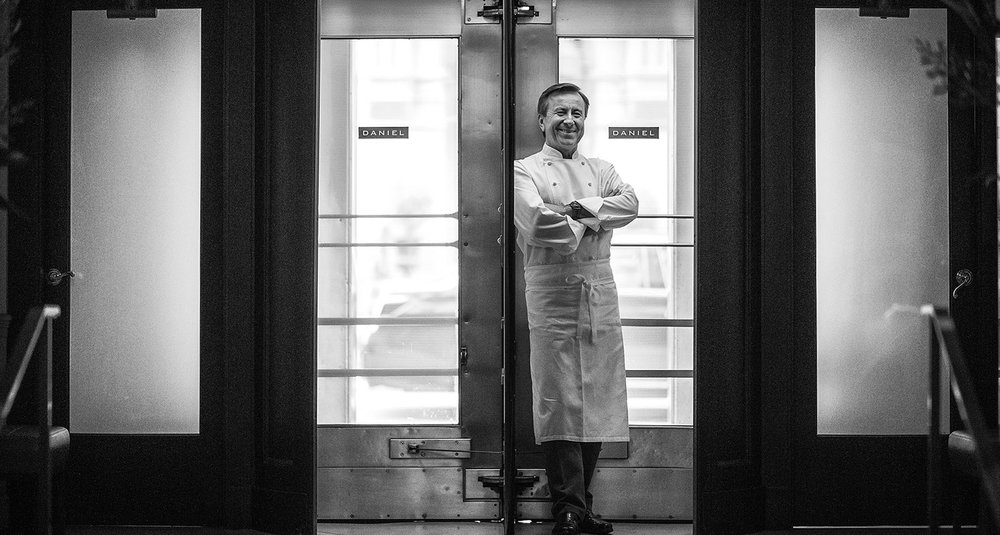 Over the past few decades, French cuisine in New York City has suffered mightily. Restaurants like La Côte Basque, Lespinasse, and Lutèce, once viewed as the pinnacles of fine dining, closed down as diners not only found themselves more entranced by Italian, Mexican, Thai, and Chinese but also abandoned the very premise of fine dining — the dress codes (explicit or implied), the rituals, the judgment (explicit or implied).

Burgers, ramen, and tacos have mostly taken the place of boeuf bourguignon and a cheese course, while craft beers and a cocktail program are sexier than a well-stocked wine cellar. If, knowing the restaurant scene of 2016, you were going to launch a career as a chef, you would not decide to become a high-end purveyor of the best French cooking in a generation.

In short: Daniel Boulud should not exist. 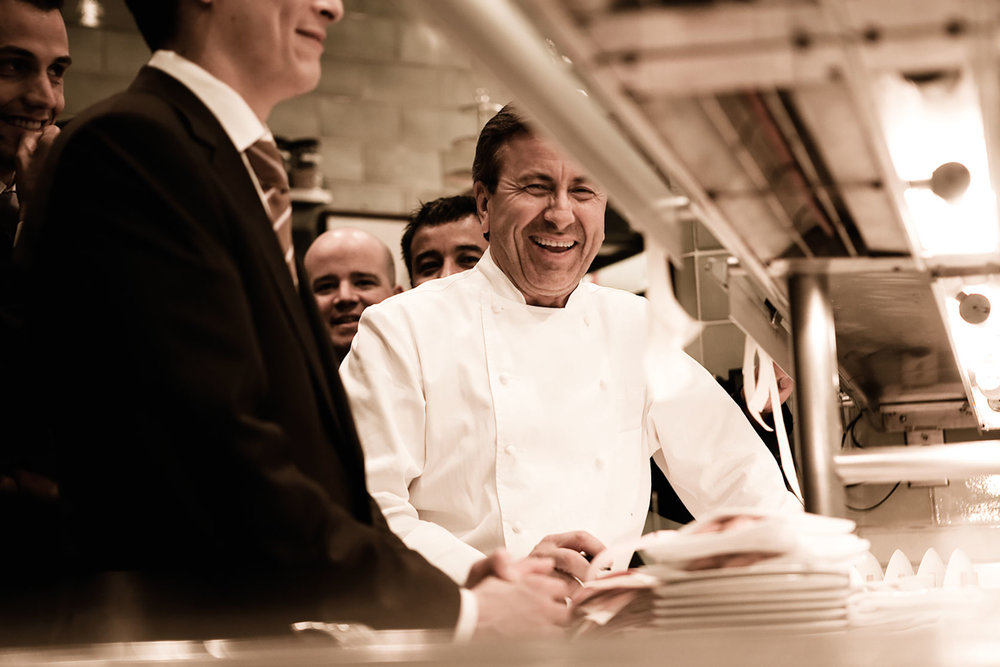 And yet he does. At 61 years old, Boulud — or DB, as people tend to refer to him, though to his face they mostly call him “Chef” — lords over a small empire of restaurants that are unabashedly French and, for the most part, unapologetically high-end. Six are in New York City, ranging from his Upper East Side flagship, Restaurant Daniel, where the seven-course, $234 tasting menu might include turbot en matelote and High Plains buffalo rossini, to the sausage-centric downtown DBGB Kitchen & Bar. Another nine stretch from Boston to Palm Beach, Toronto to London to Singapore; he visits them regularly. Moreover, those restaurants are all, somehow, cool. Or maybe “au courant” is the better way to describe them — the kinds of with-it places food lovers at all points on the economic and cultural spectrum actually want to visit, and tend to enjoy. Despite the sweep of history, they feel relevant. Not bad for a farm boy from Lyon. On a Monday afternoon in January, however, such grand themes felt distant. DB, compact in his chef’s whites, his neatly brushed hair making the shift from deep brown to steely, was sitting in the Skybox, the low-ceilinged mini-suite (think Being John Malkovich’s 7 1/2th floor) that overlooks the vast kitchen of Restaurant Daniel, and attending to one of the first of the day’s many, many tasks: tasting a new beer-battered calamari with kaffir-lime cream, destined to appear on the menu at DBGB. “This has to be more spicy and less salty,” he said, a touch of his French accent remaining after 34 years in the United States. “I mean, it’s not salty but it’s kind of…” he trailed off. “Anyway, that’s an adjustment!”[/caption] 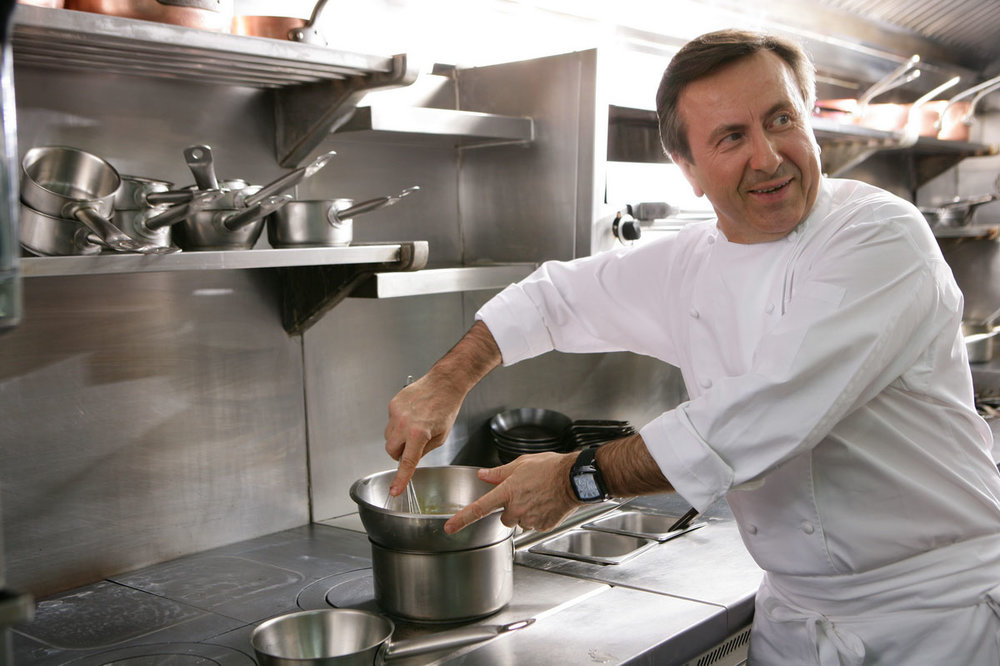 Boulud’s day, in fact, would be a constant series of adjustments. Here at Daniel, and then at Café Boulud, 11 blocks farther uptown, he would taste new dishes, discussing the ratio of toast to foie gras in a thumbnail canapé prepared by his catering chef, or enumerating the winter citruses that would bring to life a salad of speckled radicchio. His attention to detail was so acute it verged on comical. In the cramped Skybox, he maneuvered boxes out of the way so a chair could be tucked under a desk just so, and outside Café Boulud, wearing a black leather motorcycle jacket over his uniform, he not only scooped an errant paper napkin off the frigid sidewalk but took notice, just before we walked inside, of a cook smoking a cigarette across the street, his chef’s whites open to the cold.

“Can you tell the cook across the street he’s going to get sick and that man is not going to show up to work tomorrow?” was literally the first thing he said to Café’s general manager, Cherif Mbodji.

Cherif: “Yes. One hundred percent. He works for the restaurant across the street.”

For a moment, Boulud seemed almost disappointed — here was an adjustment he would be unable to make — but then there were other details to attend to: a customer who’d recently eaten at Montreal’s Maison Boulud and wanted to talk cassoulet (the secret, Boulud said, “is to have the pork belly skin layering the bottom of the pan because that will become gelatinous and give a lot of collagen”); reps from Badoît who were there to present Boulud and Café’s executive chef, Aaron Bludorn, with plaques for their recently won Michelin stars (two for Restaurant Daniel, one for Café Boulud); a rep from C-CAP, the Careers Through Culinary Arts Program that brings students from underserved communities to be paid apprentices in his kitchens. A bread delivery needed to be inspected, and a young employee who’d won a grant to train in France wanted advice (“if you could do one month in Lyon, one month in Roanne, that would be perfect”). 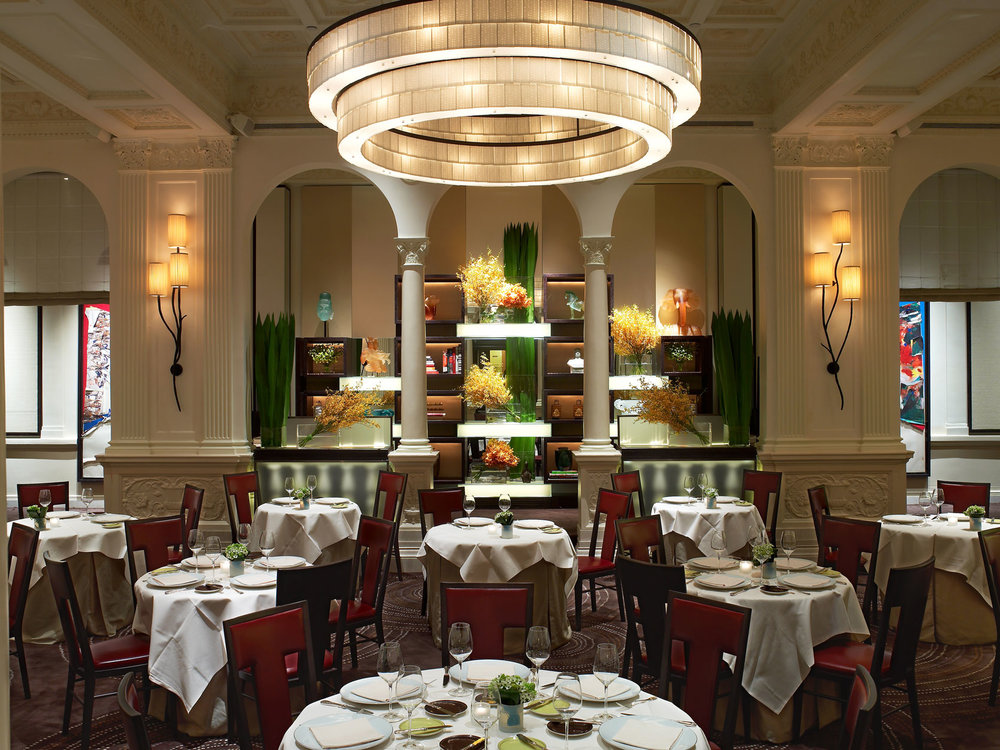 Finally, there was a condolence card to write. A devoted regular had died, and the man’s family was just now having a memorial meal upstairs in the private dining room. As a battalion of cooks began to plate the radicchio salad, Boulud leaned over a counter in the kitchen and began to write the card, pausing occasionally to ask me if he’d made a grammatical or spelling mistake. (Nothing egregious.) It was the longest I’d watch him concentrate on any single task that day, and it struck me as meaningful — and not just in the traditional way that restaurant people will say, again and again, how much they care about hospitality.

No, this was his business in microcosm. Here on the Upper East Side, cradle of luxury, his customers were literally dying, and yet Boulud, who himself lives among them, in the building above Daniel, had had the wherewithal to both honour them (and the cuisine that sustained them) and to look forward, past them, to other markets, where his food could be as hip as it was French.

Until then, Boulud had been known as an extraordinarily talented, but essentially uptown, chef. He’d arrived in the United States from Lyon in 1982, and become chef at Le Cirque in 1986, quickly earning it four stars from the New York Times. In 1992, he left to launch Restaurant Daniel, and 18 months later again won four stars from the Times. As the 20th century closed out, Boulud was solidifying his rep as a master of high-end cuisine, partly by opening Café Boulud, in 1998 — “an attempt,” as the Times’ Ruth Reichl put it, “to create a casual café,” casual in this case meaning three stars, not four. Boulud, she noted, “does not cater to a kick-off-your-shoes crowd.” That was about to change.

As the new millennium debuted, he opened DB Bistro Moderne, in midtown. The DB burger was its showpiece, a slab of ground sirloin filled with braised short ribs, foie gras, and black truffles, on a Parmesan bun with tomato compote and mayonnaise. “Take a bite,” Adam Platt wrote in New York Magazine at the time, “and these elements dissolve together in rich, almost confectionary layers; the taste is like no hamburger you’ve ever had.” 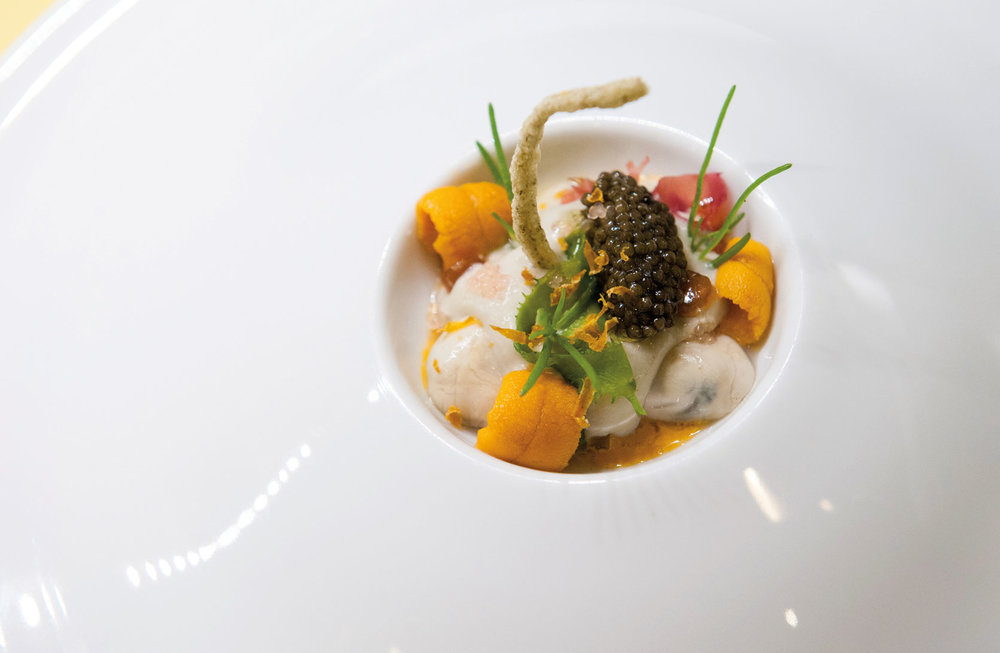 It was, although few of us realized it back then, an Important Burger. It helped Boulud bridge the gap between what French cuisine had been and what his French cuisine could be — delicious, luxurious, rooted in classical technique, and yet aware of how New Yorkers really eat. We want rabbit rillettes, and we want hot dogs with green papaya slaw and sriracha, and there’s no reason they can’t be on the same menu (as they are at DBGB). What’s more, knowing that there’s a connection between this foie gras–laden burger and the indescribable delights offered uptown makes us crave the latter all the more.

“I always enjoy having fun in my restaurants” is how Boulud explained it to me, on a quiet trip from one restaurant to another in his chauffeured Lexus. “So the structure was not like, ‘Oh, I want to be that chi-chi restaurant, very exclusive, where I can only make that many plates and give hell to the customer for not behaving properly based on the menu.’ I mean, for me it was about life is a party and bring it on.”

And he’s brought it, all right, at the restaurants and everywhere else. Until I met him that day, I’d only ever glimpsed him at parties around New York, gregarious and beloved — an energizing force who’d still be raging across the room when I was yawning and eager for my bed back in Brooklyn. The man’s got a reputation — which is normal if you’re a tattooed 29-year-old line cook, less so if you’re 61 and can shave black truffles over pretty much anything you like — although he tried to dismiss it.

“I’m getting better now,” he said, citing his toddler son— then admitting he’d been out late just two nights earlier, winding up at a karaoke joint in Koreatown. “I’m trying to find French music, but if it’s a real deep Korean place, there’s no French music. I can sing Billy Joel. I can’t sing too complex.”

For the briefest instant, I was tempted to be cynical. Here was a guy who’s been at the top of his game for decades, who stir-fries frogs’ legs with winter squash purée and remembers vividly the nine-herb ravioli he invented for New Year’s Eve back in ’87, whose former apprentices dominate the few corners of the restaurant world that he does not already rule (Andrew Carmellini, David Chang, Rich Torrisi, and Dominique Ansel, to name just a handful), who in the blizzard of a typical day in multiple kitchens can summon the focus to write a condolence card. He is, in so many ways, better than me, than you, than everyone. Was Billy Joel a calculated choice to bridge the gap between his haute self and, well, normal folk? 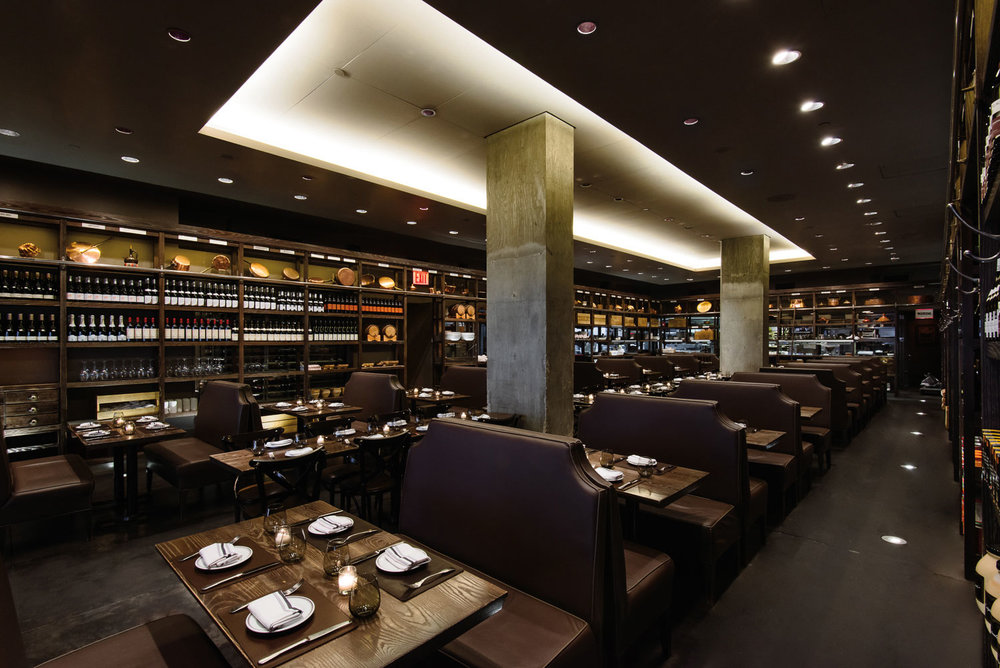 But no. DB probably just likes Billy Joel. (Who doesn’t, particularly at karaoke?) In fact, his sincerity was almost Joel-ian, as earnest as “Uptown Girl.” Every question I asked he answered with thoroughness and thoughtfulness, though surely he’d heard such queries a thousand times. And maybe that’s Boulud’s most remarkable skill — his ability, amid the flurry of a day’s hundred adjustments, to be truly present, wherever he happens to be, even if “wherever” never seems to last more than 15 minutes. Soon he’d be wearing his motorcycle jacket and heading out the door again, to inspect yet another of his restaurants — the hurricane and its calm, critical eye, all in one.

Why the Steakhouse Is Back as the Ultimate Power Dinner Destination