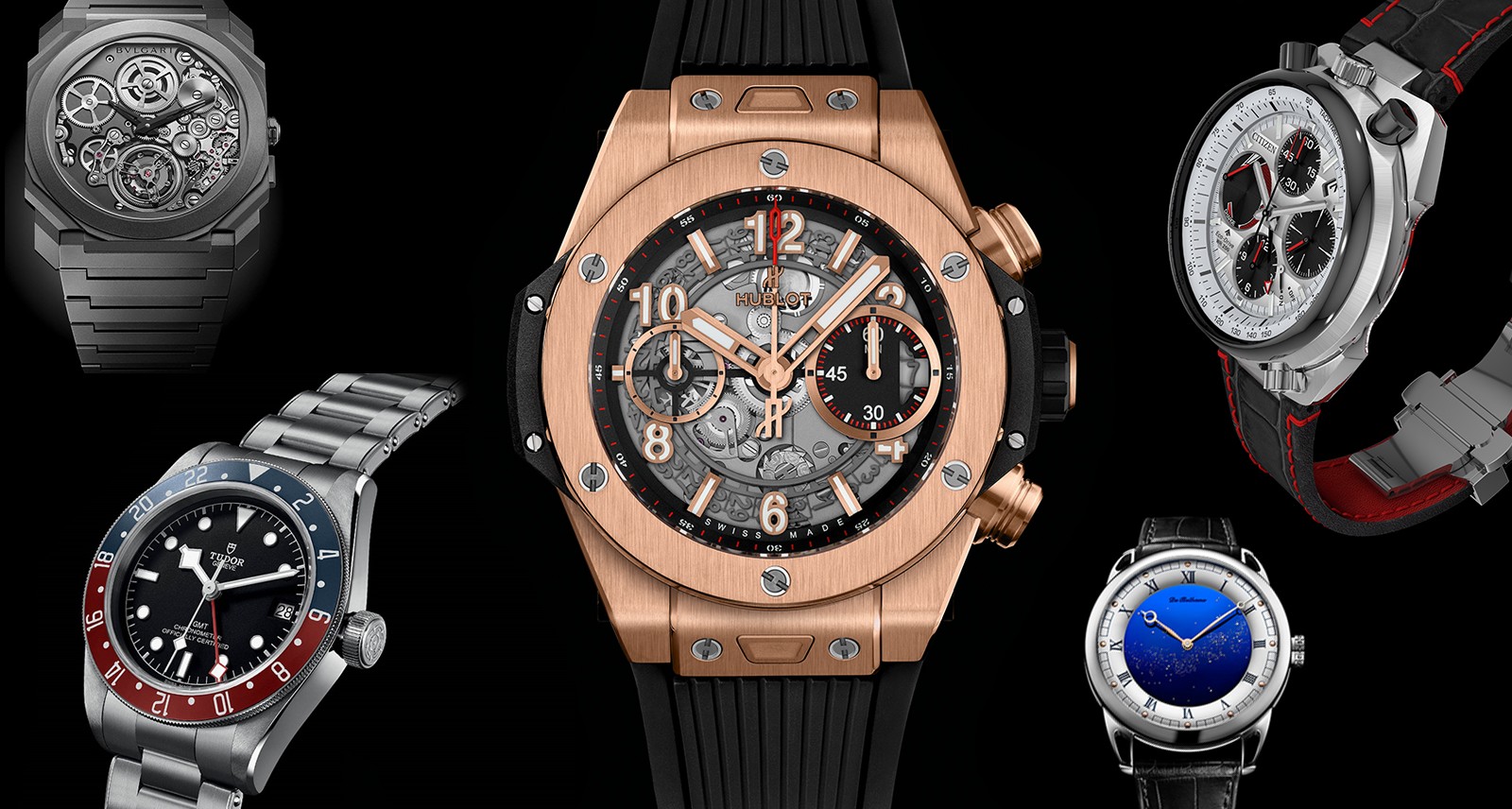 Baselworld has come and gone, and once again the industry’s heavy hitters big and small have unveiled a stunning pack of new releases to satisfy even the most discerning of watch collectors. What’s most interesting in 2018 is that brands across the scale of budgets all delivered genuinely compelling new releases, making our it more difficult than ever to narrow down our selection of watches to highlight in this list. With that in mind, here are our top picks from Baselworld in 2018.

It’s safe to say that this new GMT-Master ii is the most talked-about and coveted Rolex to be unveiled since the ceramic bezel Daytona launched in 2016. The brand has updated its GMT caliber with this new release, boosting its power reserve to a healthy 70 hours all while maintaining the brand-standard Superlative Chronometerspecification (a guaranteed accuracy of -2/+2 seconds per day). Since 2014 the only Pepsi-bezel offering from Rolex has been a white gold version of the GMT-Master ii, and given the more approachable pricepoint of this new steel variant (CHF8,800), we’ve already been hearing retailers talking of growing waitlists for the upcoming model. Adding to its desirability is the appearance of an ultra-comfortable jubilee bracelet — something we haven’t seen on a Rolex GMT in decades. 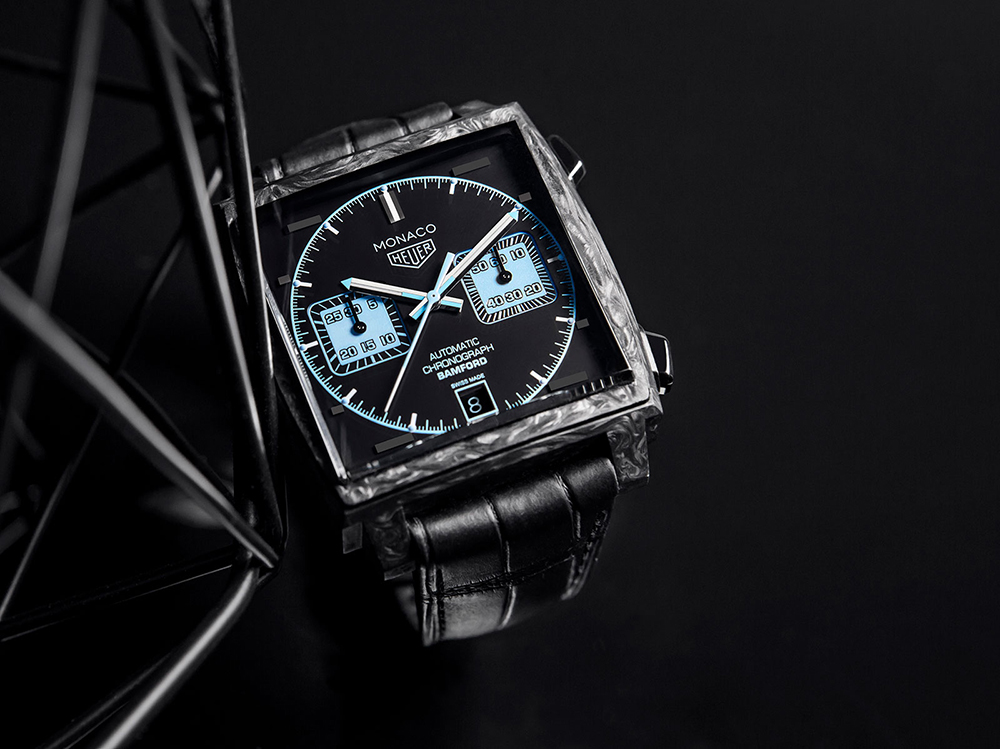 Watch customization has been taking the industry by storm in the last couple of years, and much credit can be given to George Bamford for the trend. This past year, Bamford signed on with LVMH (parent company of TAG, Hublot, Zenith, and Bulgari) to produce authorized custom editions of a number of TAG and Zenith watches, however this new release takes things a step further. Wanting to do more than dial, hand and case coating modification, Bamford designed a carbon-cased variant of the iconic TAG Heuer Monaco that will be produced in a limited series of only 500 pieces worldwide. The best part? Its 8,100 USD sticker price is actually lower than the price to customize a steel Monaco through Bamford’s clever online customization tool. 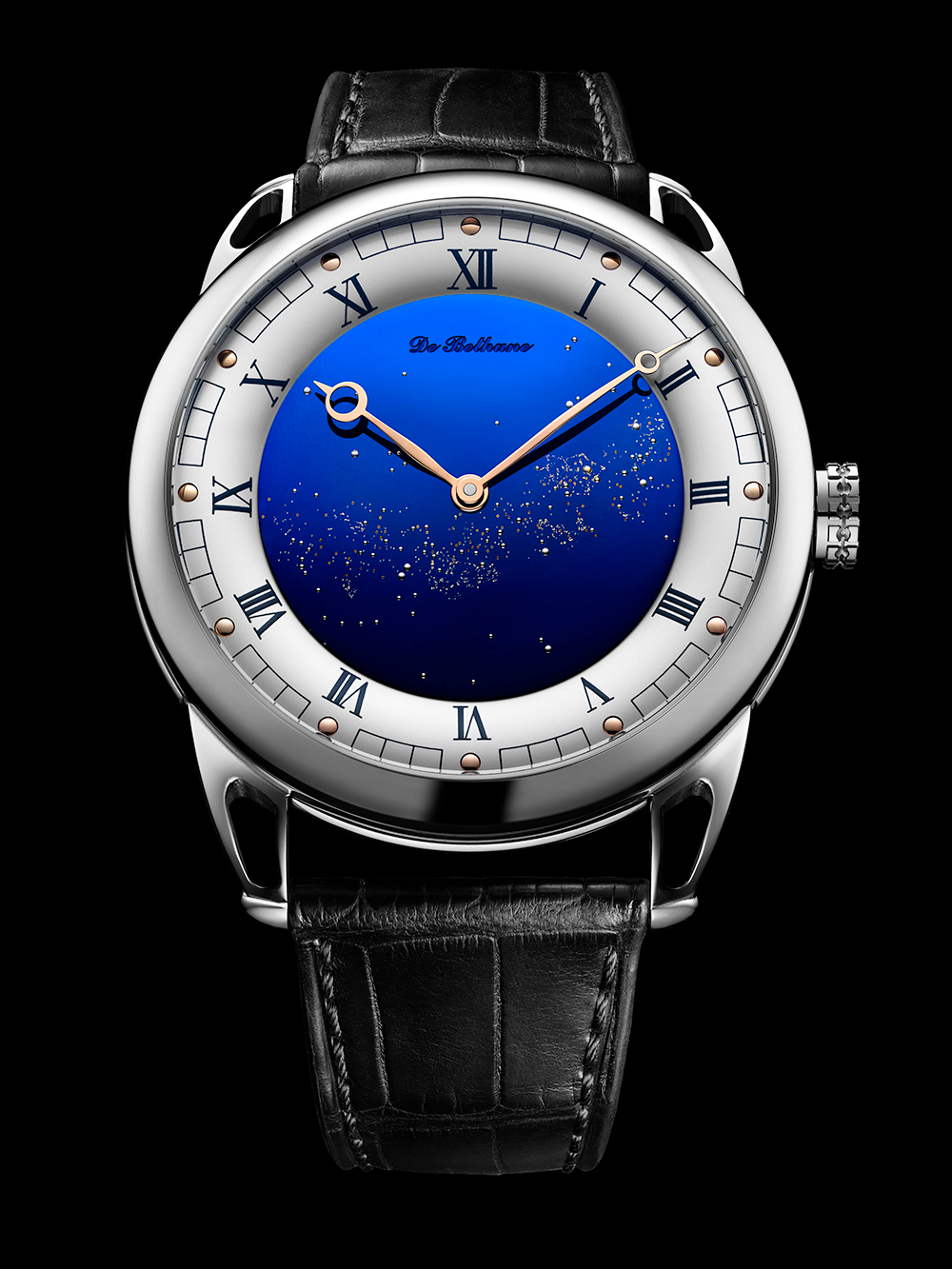 It was late last year that the announcement of new investment and the return of ex-CEO Pierre Jacques confirmed that things were back on track for the struggling independent brand De Bethune, and in a very short time the brand has unveiled a string of new releases reaffirming their place at the forefront of independent watchmaking. This latest creation, the DB25 Starry Varius, brings a smaller and more wearable 42mm case size, paired with their stunning night sky dial that can be customized to match the geographic coordinates of its owner upon request. Visuals aside, the piece is powered by an elegantly crafted in-house manually wound caliber with a power reserve of six days. The Starry Varius starts at CHF60,000, with an additional charge for customization. 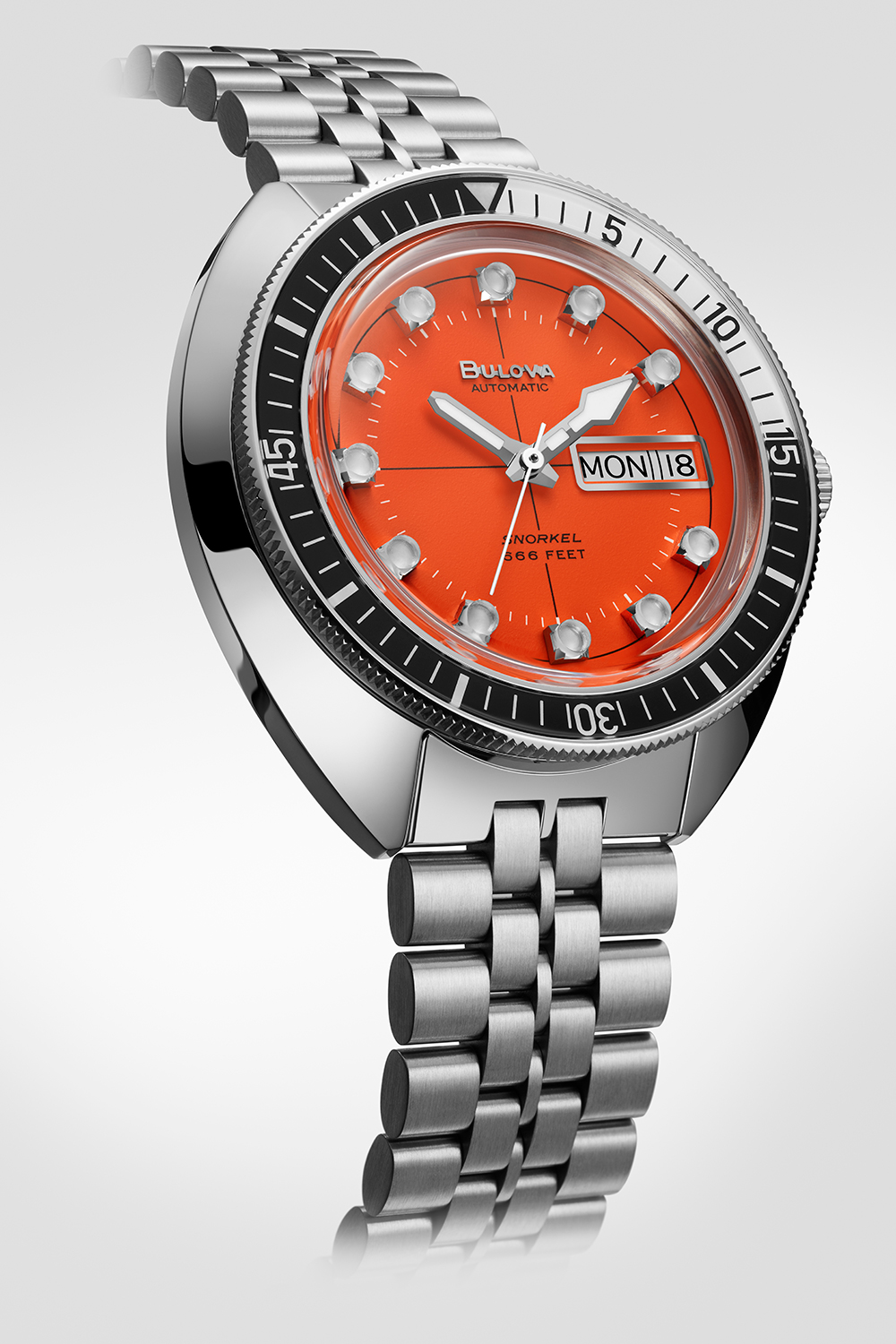 Back to the more affordable end of the spectrum, Bulova has been digging through their archives a fair bit in recent years, having reissued vintage pieces like the Chronograph C and the Lunar Pilot. This year they’ve dug into their archives yet again to reissue the Oceanographer, a watch nicknamed the Bulova “Devil Diver” by the collecting community for its 666 feet water resistance. Vintage editions of this watch have become quite popular in the entry-level vintage watch market, and we have no doubt that this 666-piece numbered edition will sell out quickly. 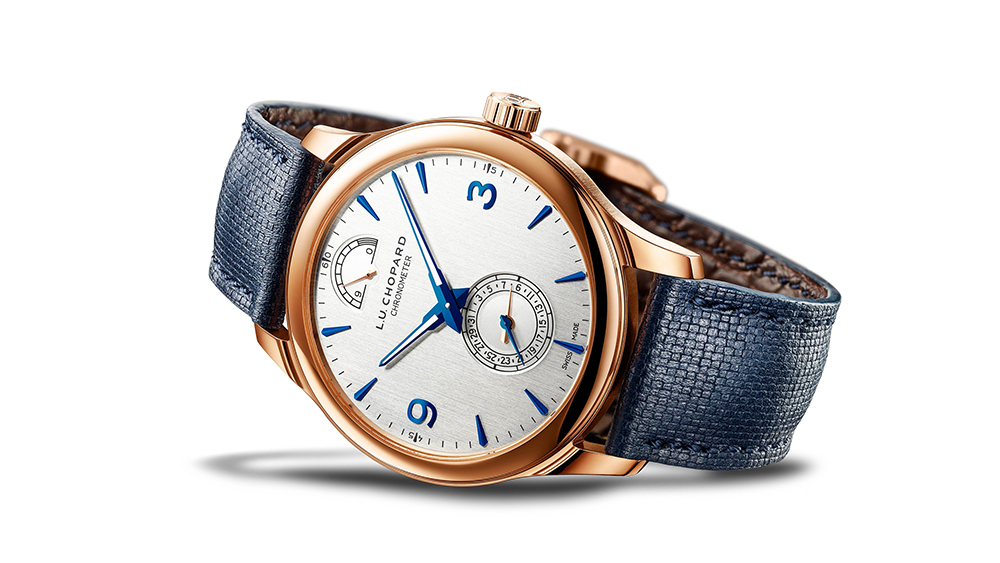 Seldom does an aesthetic redesign justify mention in a “Best Of” list, however this new casual take on the Chopard L.U.C Quattro is too good to pass up. An elegant satin brushed dial and contrasting blue indices and hands make quite the handsome combination against its rose gold case, and give the piece a unique aesthetic perfect for being either dressed up or down. Powered by an in-house manufacture caliber that uses four stacked mainspring barrels and delivers a power reserve of nine days, this piece is just as desirable from a technical standpoint as it is from an aesthetic one. Sadly, this new release will be limited to only 50 pieces, priced at CHF25,000. However, we’re hoping further models in this more casual aesthetic in the not-too-distant future. 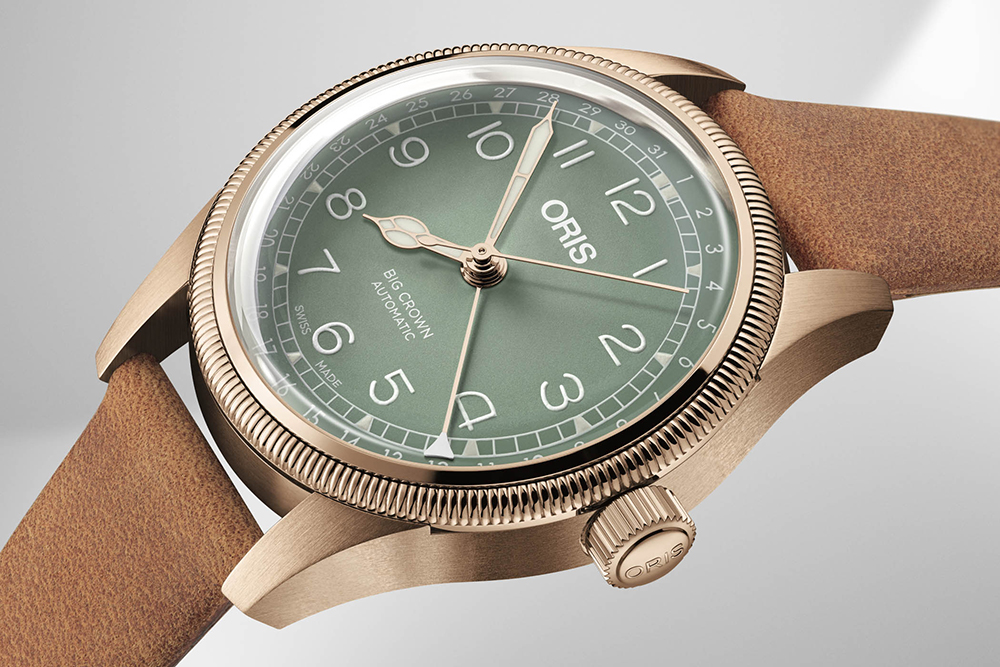 Between the rising popularity of bronze watches, and the increased appeal for more compact case sizes, this latest launch from Oris is a win-win. Sporting a muted moss-coloured dial, and a vintage-inspired dial and hand combo, once its bronze case takes on a bit of patina the new Big Crown Pointer Date could easily pass as something from a bygone era. If the 36mm case size is simply too compact, Oris has also launched a few steel versions of the model in 40mm diameter cases. 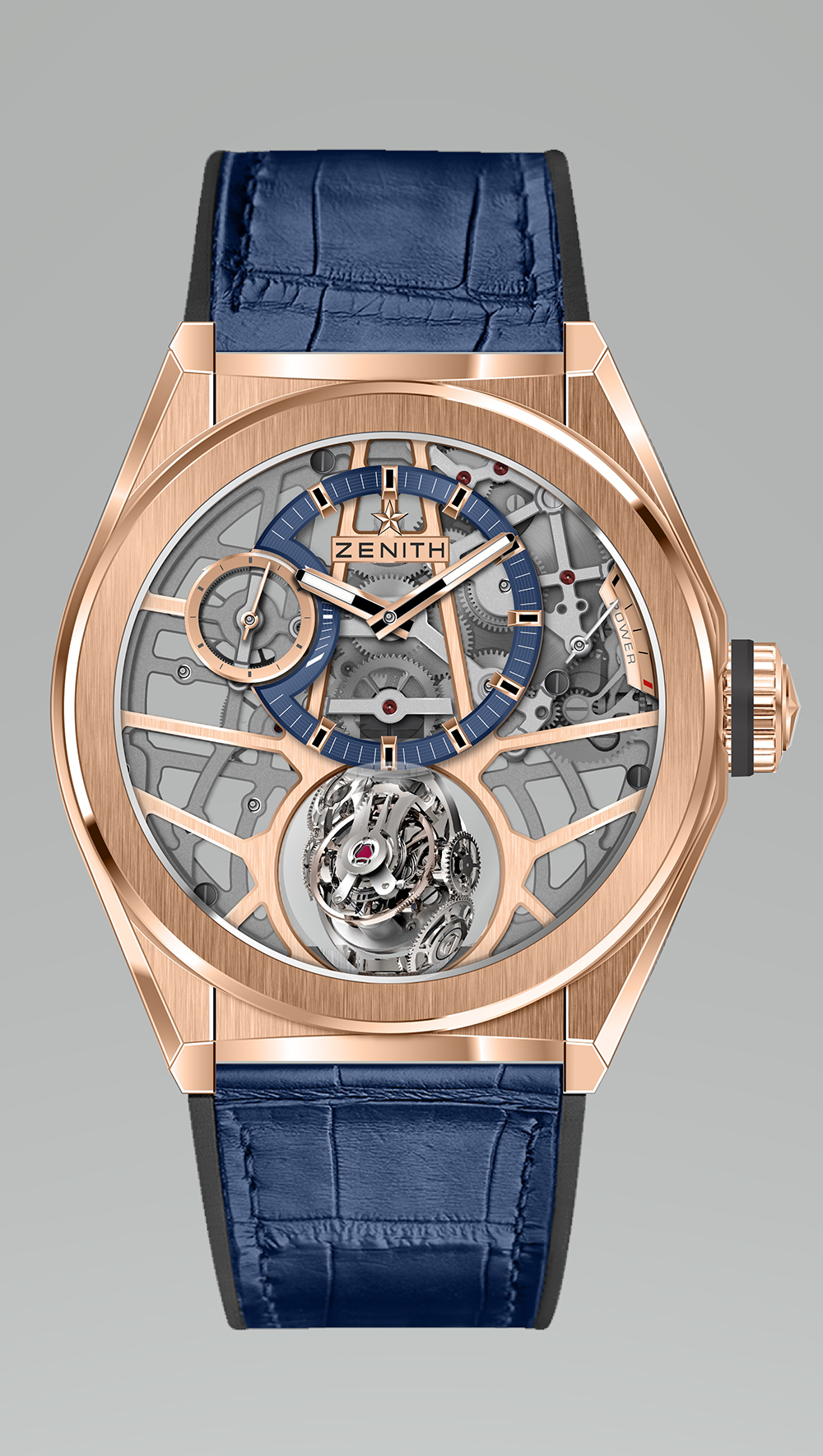 The Defy Zero G is the latest flagship model to drop in Zenith’s Defy collection in 2018, featuring a unique “gravity control” mechanism surrounding its regulator. The idea behind the complex mechanism is a logical one. As the watch moves on your wrist, the gyroscopic module is able to keep the regulator level to the ground, theoretically improving its overall accuracy. This mechanism has been in Zenith’s repertoire for a little while now, but with the new Defy Zero G the brand has been able to scale things down to fit in a more conventional casing than its predecessors. Combine that with the stunning industrial-style skeletonization of its caliber as a whole, and you’re looking at a new release that will no doubt be in high demand once it hits retailers later this year.

Believe it or not, the GMT-Master ii wasn’t the only Pepsi-bezel GMT creating massive buzz at Baselworld in 2018. The new Black Bay GMT from Tudor also dropped cover at the fair as the brand’s first GMT offering, designed with just the right amount of vintage flair. While it’s certainly not an apples-to-apples comparison with the mighty Rolex, those looking for a similar aesthetic for a fraction of the price won’t be disappointed. At $4,210 the Black Bay GMT is way more than half the watch, for less than half the price of its bigger brother. 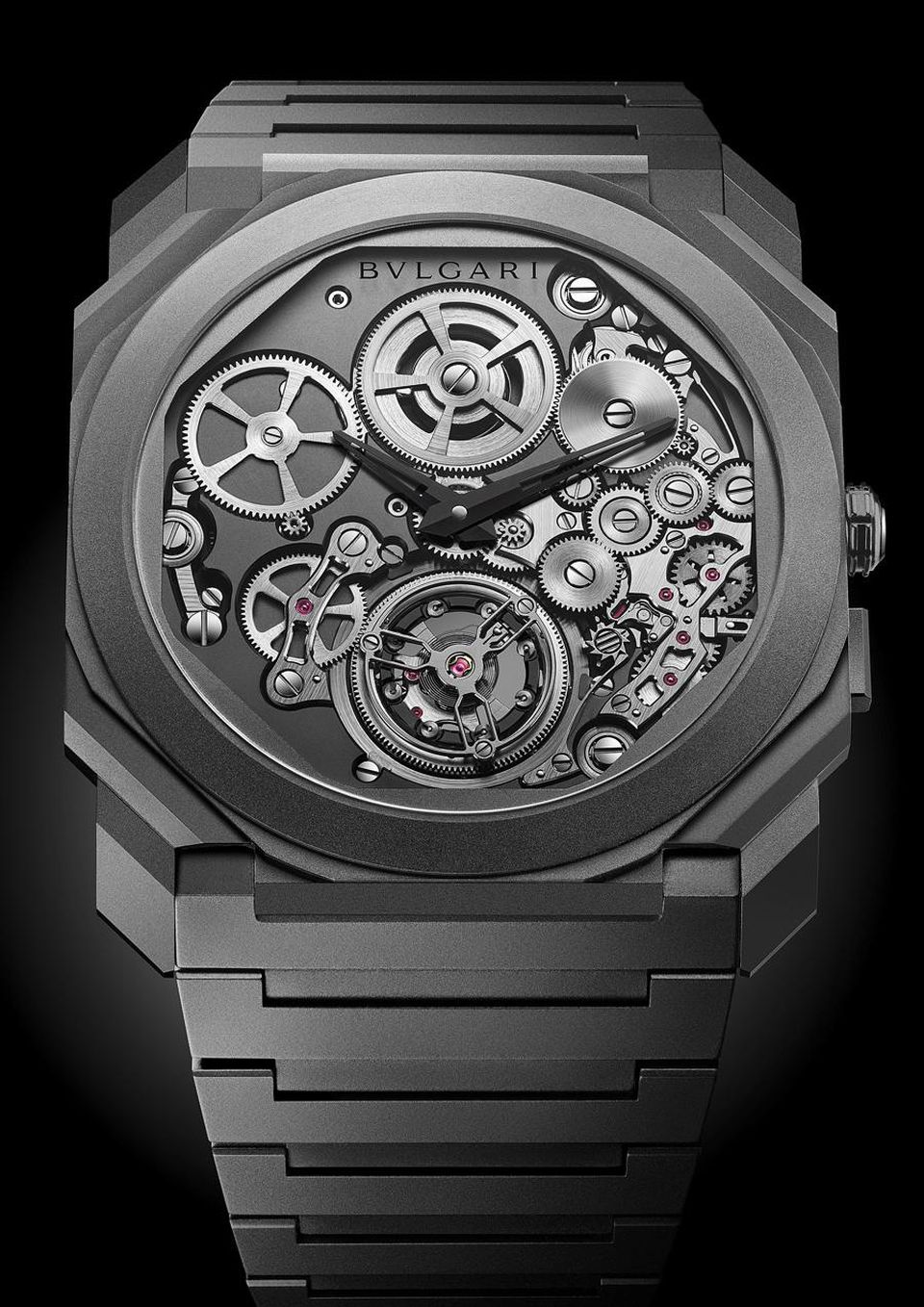 Bulgari and Piaget continue to trade blows over the varying titles for the thinnest watches on earth, and at Baselworld 2018 Bulgari once again hopped onto the podium with the new Octo Finissimo Tourbillon Automatic. Conquering two records in a single pass, the new piece now holds the title of thinnest tourbillon watch, and thinnest automatic watch ever created, measuring an astounding 3.95mm thick. While the record for thinnest automatic had just landed in the hands of Piaget at SIHH earlier this year, the standing champion for thinnest tourbillon watch was Audemars Piguet, whose Ultra Thin Automatic Tourbillon had reigned supreme ever since 1986. The best part about this new creation is that Bulgari intends to release 50 examples into the retail market, with an entry price of CHF120,000. While this may sound a bit steep considering the ever-dropping prices for tourbillon watches, it’s a very modest sum when you examine the hefty engineering and R&D that went into its creation. 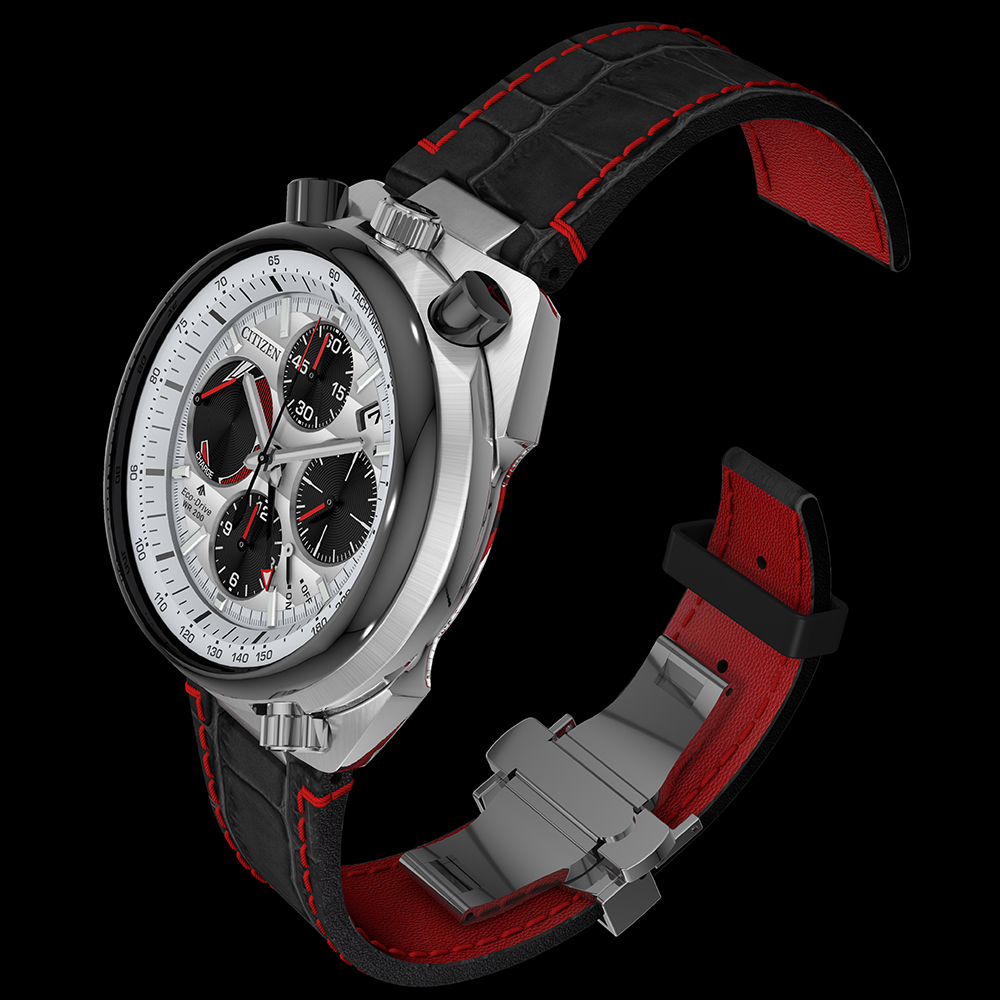 Citizen hasn’t been much for reissues in recent years, however the relaunch of the Tsuno Chrono (first offered back in 1973) was probably the smartest move they could have played. Much like the Bulova Oceanographer, The Tsuno has developed a fairly healthy cult following, and with these new releases priced relatively close to the vintage examples (sub-$1000) they won’t be a tough sell. The “bullhead” chronograph, named for the positioning of its pushers where a bull’s horns would be, is an uncommon design seldom seen in the industry these days outside of Omega’s Seamaster Bullhead collection. Citizen has unveiled four color variants of the new release, including silver and blue dials as part of standard production, and orange and cream dials in limited production runs of 1973 pieces each. 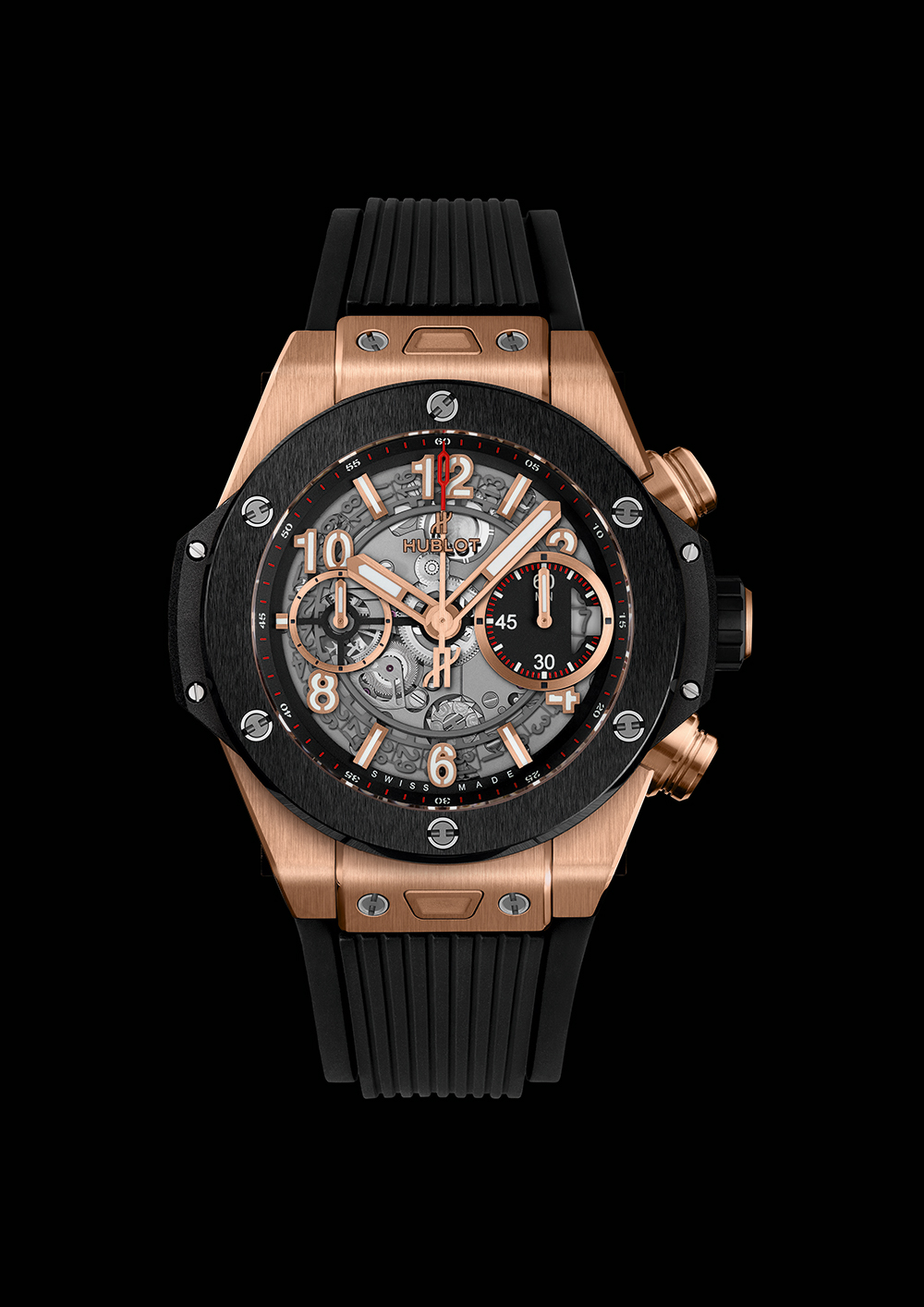 There was certainly no shortage of glitz and glam rolling out of Hublot HQ for Baselworld this year, but the real home-run in our eyes was the clever downsizing of the brand’s classic Big Bang chronograph. Scaling down from 45mm to 42mm in diameter (and shaving a bit of case thickness in the process) the Big Bang Unico has just opened itself up to a much wider demographic who found past versions to wear too large on the wrist. Starting with four variations for 2018, the Big Bang Unico 42 will be offered in titanium and King Gold, both with the option of a black ceramic bezel. 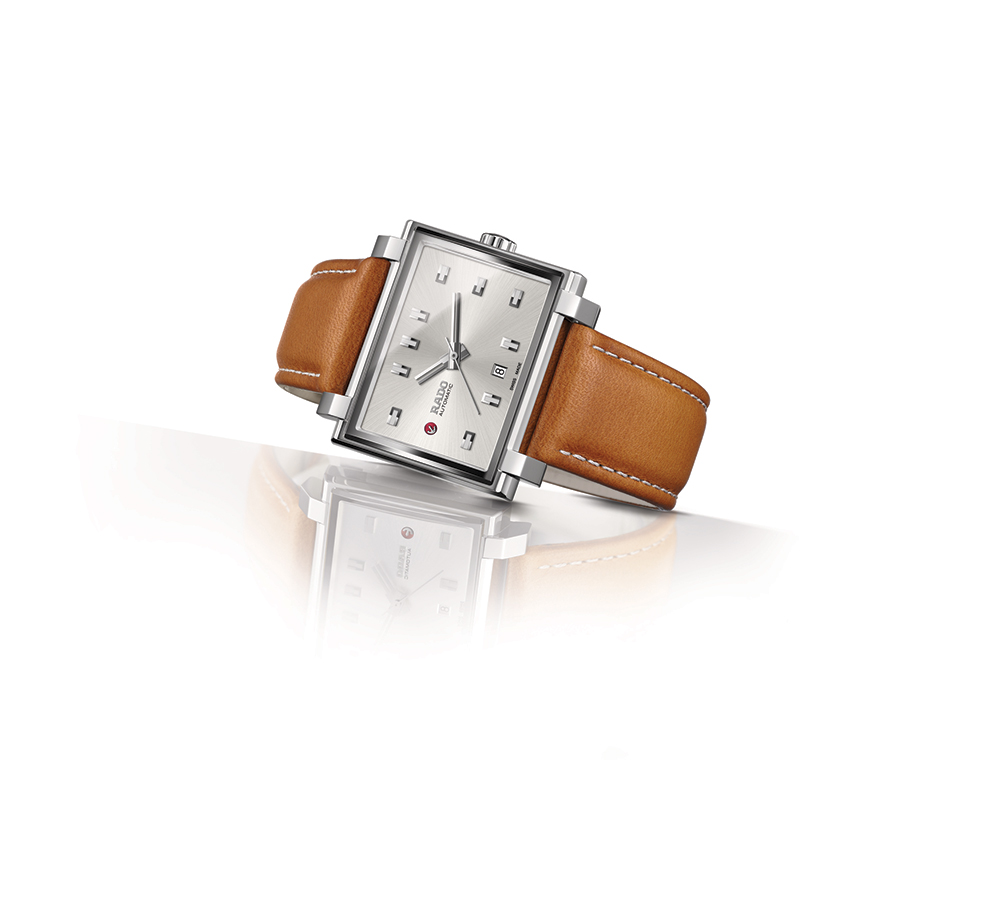 One more offering that jumps on the vintage reissue trend in a rather tasteful way is the new Rado Tradition 1965. Known as the “Manhattan” back in its day, Rado relaunched the piece using a modern ETA day-date caliber with an 80-hour power reserve in two different case sizes—the M model in stainless steel measures 35mm across, staying somewhat true to the original, and the XL model in titanium, coming in at a much larger and more contemporary 44mm. Both versions will be limited to 1,965 pieces worldwide with a starting price of $2,400.

The 14 Most Incredible Watches From Baselworld 2017