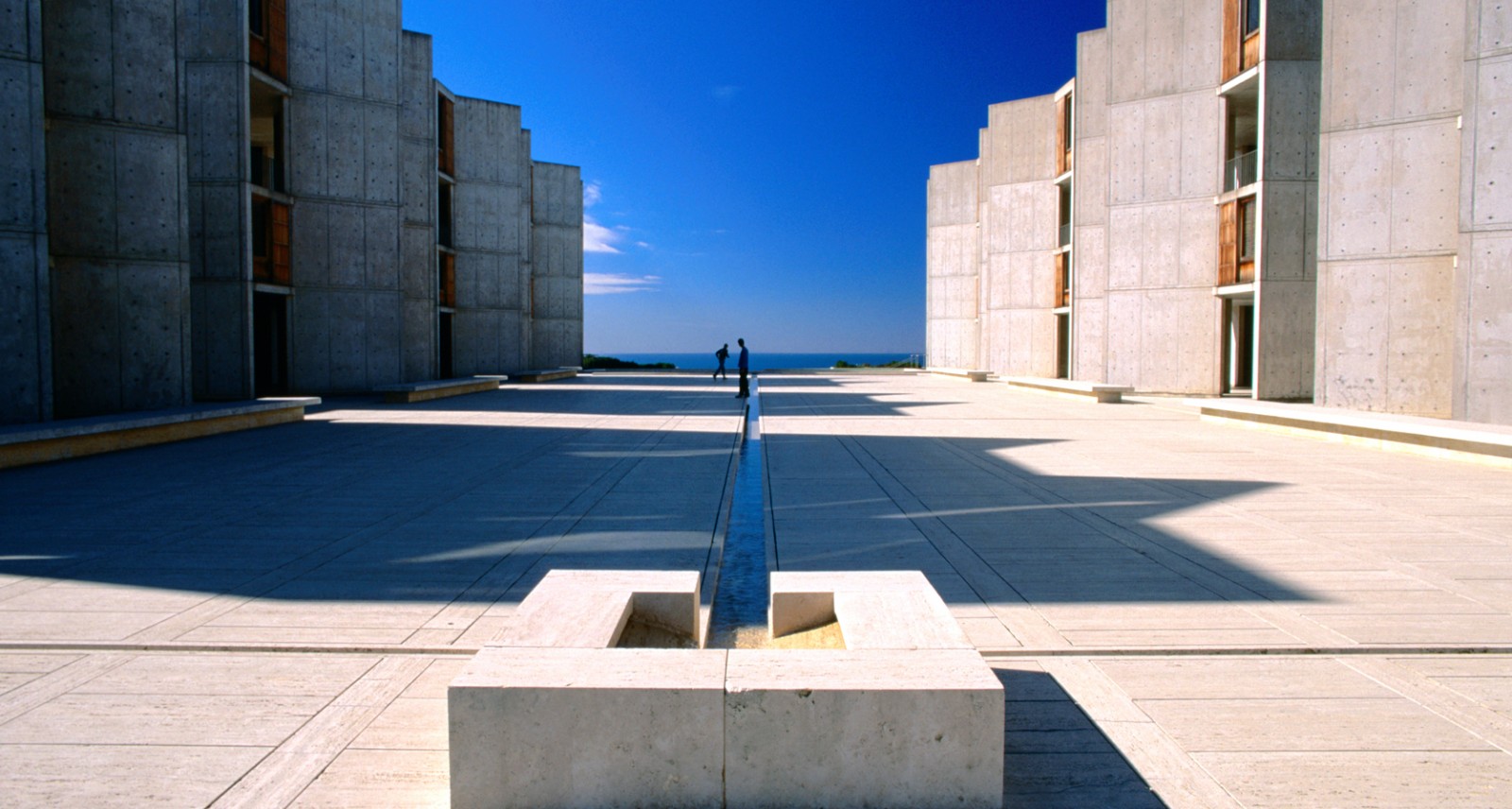 Architecture is everywhere. It’s literally all around us — you’re probably sitting in a building, one that someone else designed, right now.

But how much do we ever think about it? How much consideration — functional, aesthetic, cultural — do we give to the buildings we see and use and interact with everyday? And even then, how much do we really read into it? One might appreciate a set of lines or curves, a door handle or a clever piece of furniture — but what do those things represent? How do they work? And what makes a building truly good?

To that end, we spoke with some of our favourite Canadian architects, and asked them to pick a single building, anywhere in the world, and explain just what makes it so great. What follows are words from some of the top men in their field — and, by extension, a rare window into the architectural landscape of this country. “Louis Kahn was commissioned by Jonas Salk to create a research centre. Salk said: ‘I want you to design a building that inspires people to ask questions.’ He didn’t specify square footage or number of labs. It was that simple. And I would say what Kahn built is probably the greatest building in America. What’s better than it? It serves a high social purpose — the last time I was out there, there were something like eight Nobel prize-winners onsite. It’s been a platform for inquiry and real scientific breakthroughs in many areas. It’s not just something that’s of the moment. The building is there, like a ruin, like a shell.

Kahn was an interesting character. He has very few masterpieces. He was searching for a different meaning in architecture. Like all the greats, he understood history. He understood that architecture is a transformation of form, that you should live in the present and have a sense of belief. The building is inspiring not just as a form, but as a place in the world that’s dedicated to asking the big questions. That’s, for me, the role of architecture: to be less about itself as an object in itself, and to be more about understanding its role as a partner in human experience. And then you understand the equation differently. You understand the ways in which architecture supports inquiry. How do you translate that? It’s such an interesting mission. Salk posed a great question. In seeking perfection, Kahn missed all his deadlines. He kept going on and on and on. It was never about deadlines or money, it was all about the idea.” A founding partner of KPMB, Kuwabara is one of Canada’s most successful and most decorated architects. His projects include the National Ballet School, TIFF Bell Lightbox and the Canadian Museum of Nature. And, not for nothing, he’s also an Officer of the Order of Canada. “When I first saw it, in very rough renderings probably 15 years ago or so, [the building] was rather awkward. And it still does look awkward. But the form was like nothing that I’d ever seen before. As it became clearer as to how it actually works and functions, on all levels, it just started exposing what architecture — or any project — should strive to do. At the time, it was part of a rethinking of what libraries are and should be in the digital age.

The architects studied libraries around the world, and they changed how libraries are structured and organized. They created something called the mixing floor, where there are 30 librarians with headpieces and mics at your disposal, trying to assist you. They created a book spiral, which is about five stories tall; the reason for spiraling is that library collections grow, so the big question is always how do you store new books? You always have to move things around. But in a spiral you can just move things up or down the spiral in a continuous section.

You’ve got this dichotomy, which we tend to call Dutch Ugly: there’s this building that’s rather ugly, but once you understand how it works, it becomes rather gorgeous. The aesthetic supports that. It challenged me to keep considering architecture as something that comes from within, and something that can attain beauty from intelligence. I think it’s a temple of what modern architecture is supposed to be.” Radulovic is based in Winnipeg, and is the co-founder of 5468796 Architecture, the firm behind some of the most exciting contemporary buildings in Manitoba and beyond. “The thing about the Barcelona Pavilion that always amazes me is that the whole syntax, the whole grammar, the whole vocabulary of modern architecture was established in that single project in the 1920s — so nearly 100 years ago. It seems like everything you see, almost, owes some homage to it. You hear people talking about mid-century modern. Well, nearly all the rules of mid-century modern were in the Barcelona Pavilion. The structure is very kinetic. One of the ideas that was important to the pioneers of modern architecture was that buildings not be static, implying some of the dynamism of the machine age. It’s a kind of tectonic architecture — it’s a house of cards, made out of a series of planes that are pure planes, either horizontal or vertical. And it uses reveal joints — a shadow that transitions one material to another, like from a wall to a floor or another wall. Before the Barcelona Pavilion, every joint had trim plastered onto it. This was the beginning of elemental articulation — each element is its own form, independent of the last one.

And it also has the furniture. The Barcelona Chairs, which are arguably the most famous piece of modern furniture, were custom designed for that building, for the king and queen of Spain to sit in for the ribbon cutting ceremony. It’s a complete work of architecture. You could look at that building and have a complete career just by looking at it. Any modern architect who says they’re not influenced by the Barcelona Pavilion — and who’s any good — is lying.” Born and raised in Nova Scotia, educated in California, Italy, China and Japan, MacKay-Lyons brings an international approach to his Halifax-based firm, MacKay-Lyons Sweetapple Architecture. His best known works include the Dalhousie Computer Science building, and many stunning beach houses across the Maritimes. He is a professor of architecture at Dalhousie University. “I admire this unique house, tucked away in a private courtyard in Paris, for its innovative appropriation of industrial materials. Designer Pierre Chareau — who was better known as a furniture designer, as evidenced by the fine detailing — was the first to use walls made from glass block. The material was originally engineered for sidewalks to allow light down into dark Parisian basements. Chareau used it as a translucent façade to fill the interiors with diffuse natural light during the day and shine outward like a lantern at night.

He also incorporated other industrial materials: raw steel columns with exposed round bolts, dark green slate and a rubber floor were highly unexpected at the time, but create a surprisingly rich and luxurious environment. This inspired me for a home I designed on a dramatic site perched on the edge of the Scarborough Bluffs overlooking Lake Ontario. I created a façade containing large ‘channels’ of translucent glass, normally used on commercial buildings. Like La Maison de Verre, the facade glows. Inside, exposed metal columns and a blackened steel fireplace utilize industrial materials. For me, drawing inspiration from Chareau’s precedent-setting Maison de Verre, the ongoing search for innovation using unexpected materials and showing a client how this can really make a space special, is what creates great design.” A principal at Taylor Smyth Architects in Toronto, Taylor is responsible for some of the brightest residential and educational buildings built across the country in the last decade. He’s won awards from the Ontario Society of Architects and generally has great taste. “I think it’s one of the most important buildings of the past 50 years, probably in the world. It does everything that great architecture should do. It misbehaves. It questions everything about how a city should be developed and what an institution like OCAD should be.

There are obviously some drawbacks, like questions of functionality inside. But I think that’s just a symptom of Toronto not investing in this kind of architecture — not willing to go full on. This building went up when I was studying architecture in Italy. When I came back to Toronto, it was this amazing miracle that had appeared in the city. And it’s amazing that it happened in Toronto. Will Alsop is part of a school that I’d call The Emotionalists, which was known for blurring art, politics and architecture. Their work was a response to 1970s radical London — to have a building like this in Toronto is ironic, but also a feather in our cap.

And I don’t think Toronto has learned enough from this building! We built that and we built the ROM and we built the AGO — it’s as if we’re only allowed to build interesting buildings if they’re institutional projects. What about where we live? Our condominiums? Our banks? Our office towers? In the end, architecture’s the sum total of what our greatest aspirations are as a society. I think that all of our projects should aspire to that kind of dialogue.” Josephson is a co-founder of Partisans, the forward-thinking Toronto-based practice behind much-lauded (and much-photographed) projects like the sweeping wood-paneled interior of Bar Raval and an undulating sauna on Georgian Bay.