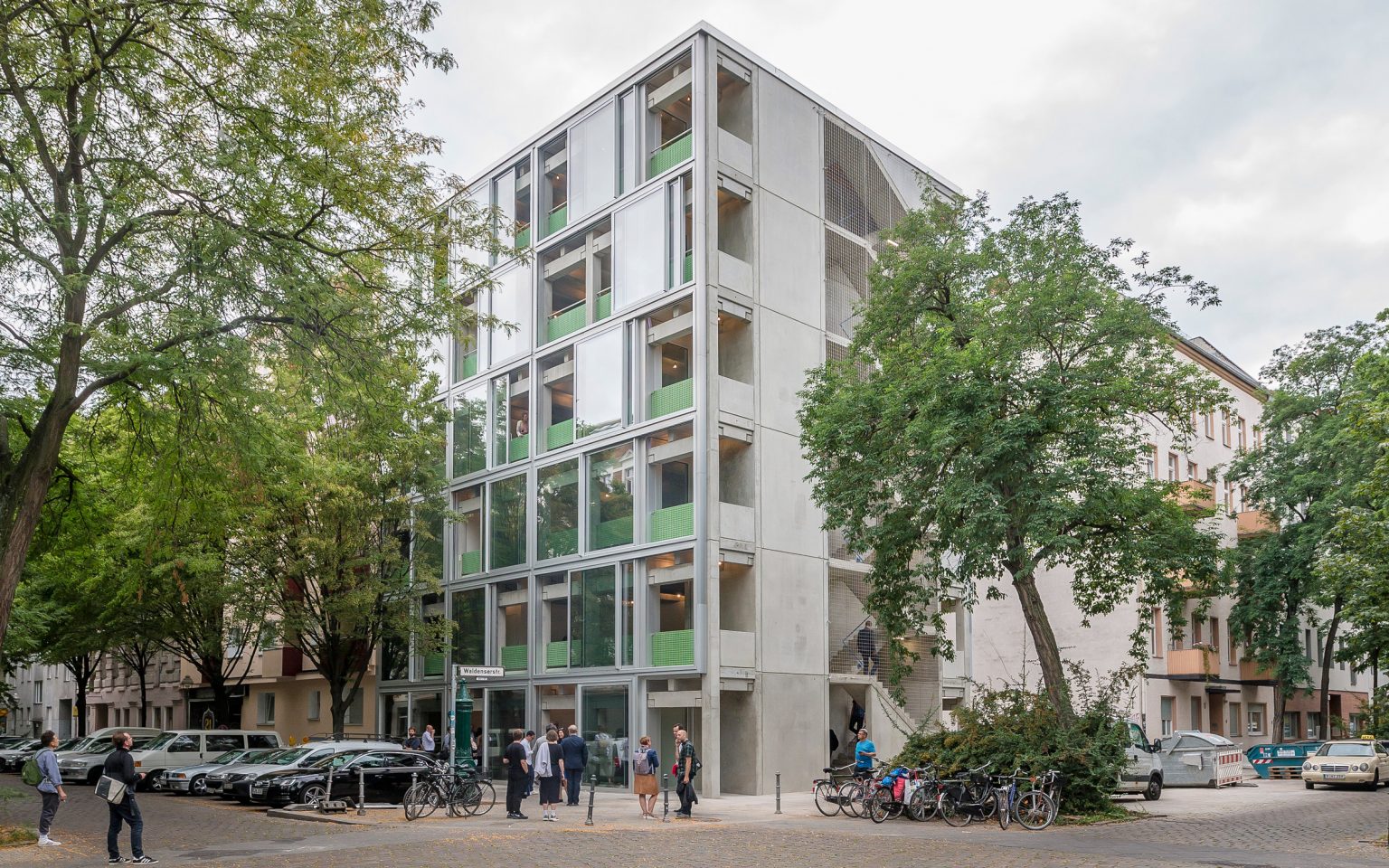 Named Wohnregal, the warehouse-style block was constructed form prefabricatedconcrete elements, with pillars and beams that support slabs to create the potential for wide-open rooms.

The individual stories have no structural walls inside and span 13 metres from the facade to facade. Occupants can insert their own drywalls into the spaces to divide them according to their lifestyles.

A type of precast concrete beams called TT-beams were used for the construction.

The sliding glass doors can be opened in summer to naturally ventilate the building.

Outdoor staircases covered with stainless steel mesh zigzag up the side of the building, turning a functional element into a visual part of the block's facade.

"The ambition was to bridge two apparently contradictory challenges the housing market in Berlin is facing," said FAR.

"Countering preconceptions that serial construction automatically implies a standardization of the inhabitable unit itself, Wohnregal offers a wide range of different live/work atelier layouts for an ever-broadening bandwidth of urban lifestyles."

Wohnregal was built with just six weeks of onsite assembly and construction costs averaged at €1,500 (£1,350) per square metre.

Aside from two mechanical cores, there are no restraints on the layouts of the floors, each of which are divided into the different apartment and workshop sizes.

Units vary from 35 to 110 square metres, facing east or west or, for some of the larger ones, both. Sunrises and sunsets are visible from the corner balconies of each unit.

"Prefabrication in housing has been a century-long story of optimization, and has had a continuous up and down of promises stated and promises broken," said FAR.

"Wohnregal re-appropriates the DNA of the prefabricated warehouse, which has taken the approach of optimization to its absolute limits while exploiting that very economy. It also reinterprets its structural openness to introduce a discourse that has been strangely absent in the focus on prefabrication: the complexity and variety of inhabitation."

FAR, short for Frohn and Rojas, was founded in 2004 by Marc Frohn and Mario Rojas Toledo and is based in Berlin.

Wohnregal has been shortlisted for Dezeen Awards 2020 in the housing projects category, along with projects such as an apartment block for "slash youths" in Chinaand a co-housing project in France.

Photography is by David von Becker.