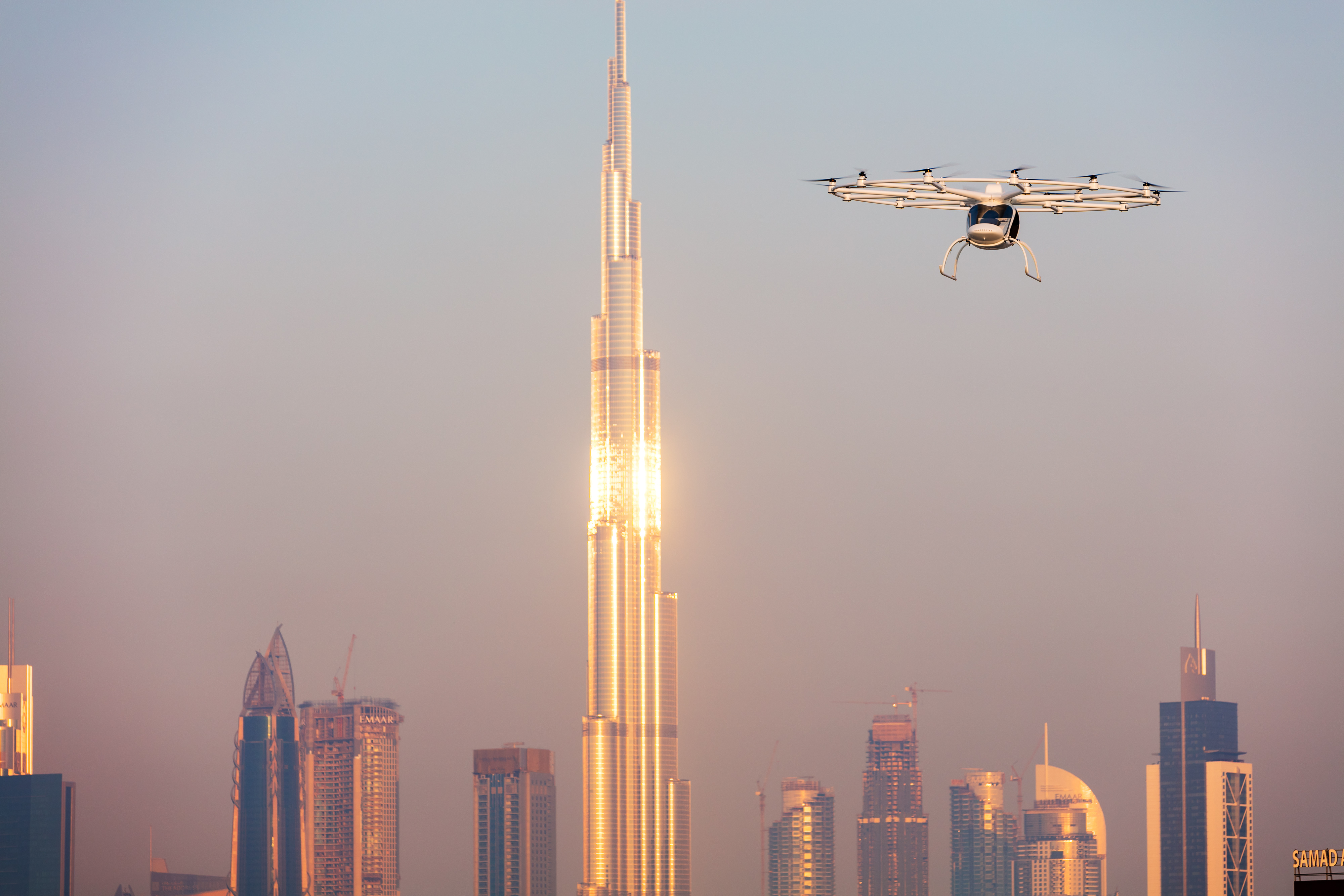 Flying cars were previously only seen in science fiction movies, but now they are reality. At least four companies already offer airworthy models and dozens more are working on prototypes. We are, after all, talking about a growing market which, according to an estimate by the investment bank Morgan Stanley, could be up to 1.5 trillion US dollars in size over the next 20 years.

The German start-up Volocopter has already carried out its first test flights with the Flugtaxi 2X. The drone has 18 rotors that have enough power to lift two people weighing a total of 160 kilograms into the air. The range is currently about 27 kilometres when flying at an average of 70 km/h. The rechargeable batteries are modular and can be replaced, which shortens the service life.

The chip manufacturer Intel, which has been involved in the project since 2016, also believes that Volocopter is on the right track. Point-to-point air traffic is to be realised first of all. For example, the drones would travel between two hubs where they could change batteries. A completely autonomous one? Flying is not yet possible this way, at least not to start with.

By air taxi to Sylt

This restriction makes the flying taxis viable only for special cases. On Sylt, for example, there have been severe restrictions in rail traffic for years, the main route to the island. ‘Almost no day goes by without extreme delays or cancellations,’ says Werner Schweizer, Mayor of Klixbüll. The small village in North Frisia with its approx. 1,000 inhabitants lies directly on the railway line to the island. On the opposite, eastern side of the municipality is Leck airfield, which is to be reactivated this year. As a former NATO site, the area is undergoing conversion which, according to Schweizer, will focus on air traffic. ‘In rural areas, I have to think about where my strengths lie. We’d never have had the idea of building an airfield, but it’s already there’, he says about the plans.

This will create a business park with a runway where aviation-related companies can start to settle. SyltAir, for example, wants to use the airport from next year. And Schweizer, who was himself a pilot in the Air Force for many years, also considers air taxis to be a realistic option: ‘When you see how many trades, lawyers or tax consultants have to go to Sylt for small meetings, they’ve got no desire to use an unreliable railway. At least we’d have an alternative’.

Many manufacturers are pushing into an unclear market

The fact that there is a powerful market for passenger drones is not something only Volocopter has recognised; the competition is great. Porsche is working on a concept to enable scheduled flights by 2025. The German start-up company Lilium was able to attract 90 million US dollars in investment for its air taxi. At this year’s South by Southwest (SXSW) in Austin, Texas, the US helicopter manufacturer Bell presented the Nexus model, which will be able to be booked via Uber in the future. And Airbus wants to test the CityAirbus in Ingolstadt. The US company Kitty Hawk has also presented a prototype that can already fly, the Flyer. According to Wirtschaftswoche, up to 60 different air taxis are under development worldwide.

Federal Transport Minister Andreas Scheuer (CSU) has responded to this trend and will provide up to 15 million euros over the next four years for the development of air taxis: ‘Germany is a pioneering aviation country. Drones and flying taxis have long been more than just a vision. They are the gateway into a new dimension of mobility and a huge opportunity for municipalities, companies and start-ups that are already driving forward development in very concrete terms and very successfully today’.

However, the industry is still in its infancy. Important approvals from the European Aviation Safety Agency EASA are still pending and new directives still need to be formulated. The American FAA is also not yet ready to permit pilotless drones on a commercial basis. However, experiments have been allowed since 2018.

Werner Schweizer also knows that it will be some time before tourists take off for Sylt from Leck Airport. He follows the development of the new aircraft closely: ‘The great change in electrical aviation will come from 2025 when it becomes feasible to accommodate 500 watt hours per kilogram of battery mass. Then it’ll really take off’.

The Go-To Device To Manage Your Data Securely

Why Retro Tech Feels Decidedly of the Moment