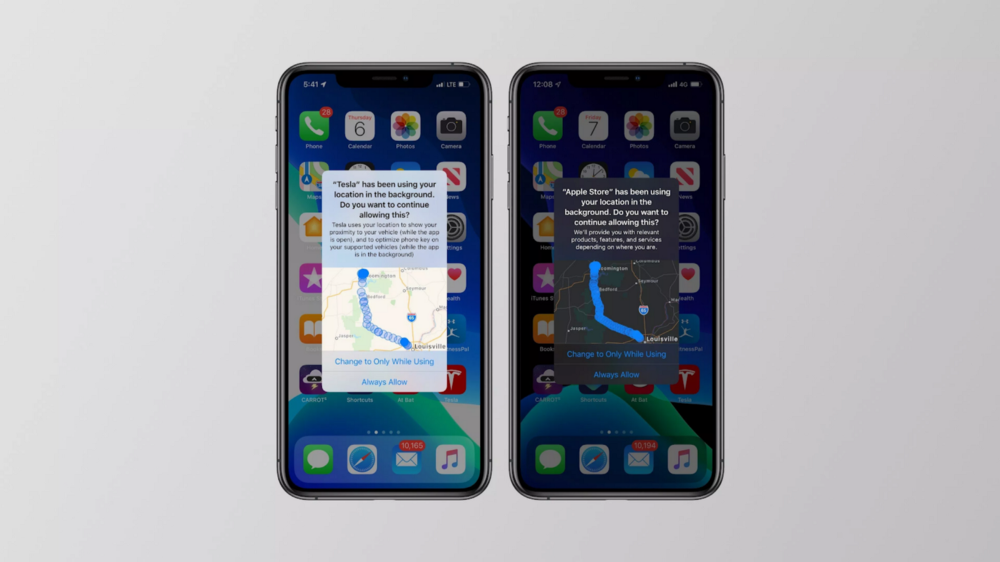 For years, the apps and games on your smartphone have been able to secretly track your location and sell that data to advertisers. You’ll get a one-time prompt to allow an app access to this information, and if you allow it, they’ll happily harvest your information in the background as you continue on unaware.

That’s about to change. New updates coming with iOS 13 and Android Qnext month will provide more detailed information about how apps use your location data, and they’ll allow you to quickly disable access if something seems sketchy. Marketers who harness location data may be in for something of a rude awakening — if not an outright apocalypse — when users tap into these features.

Location data is a goldmine for advertisers, because it provides deep context about user habits off-line that just aren’t available in many other ways. If an advertiser is able to understand that you visit a lot of coffee shops, for example, that’s a data point they can use to advertise coffee to you.

It can also be used in more complex ways, such as deducing when you’re visiting a friend and targeting you based on mutual interests, like showing you ads for a cool new shirt your friend might have purchased recently. This process taps into something called a “look-alike audience.” This style of marketing can be eerily accurate, which is why people sometimes suspect that advertisers are tapping their phone microphones.

There are legitimate purposes for gathering location data, of course. Foursquare, for example, tracks location data to better estimate how many people are visiting a particular store, so you can estimate how long lines might be. Google Maps does the same thing for public transit use.

But, as Gimlet Media’s Reply All podcast found earlier this year, location data can be harvested and sold in weird ways. A researcher working with the show revealed that a free game had secretly sold his location data to unknown buyers, allowing robocallers to spoof local phone numbers when calling him — an effort to make the spam look more legit on caller ID.

Giving consumers control over how their location is harvested, and the tools to make an informed choice about who receives it, is a good first step toward changing a broken industry.

All of this works because we’ve grown accustomed to giving location access to apps that ask, unless they’re inherently suspicious. (You can imagine why Pokémon Go needs your location, since walking around in the real world is a key part of the game, but maybe you’d think twice about handing it over to “flashlights, digital bibles, and even fart apps.”) Location access has been a binary choice, either allowed or blocked entirely, for years, with few ways to understand what’s collected or how often they’re tracking you.

Android Q, which is due in September, will provide three new options when apps ask for location access: “allow,” “only while using app,” and “disallow.” The changes in Q also remind the user when apps randomly access their location in the background and will offer to help them disable that access. These pop-ups have surprised me throughout the Android Q beta: A lot of apps are randomly accessing my location in the background.

Apple’s changes in iOS 13, also due in September, take things one step further. iOS 13 reminds you with a mid-screen popup that an app has location access, but it also visualizes what location data it’s siphoning off in the background by displaying it on top of a map.

These pop-ups are incredibly empowering. I saw a number of them for apps I’d already installed on my iPad Pro, which is running the iOS 13 beta, and I immediately revoked location access for many of them.

This all matters, because apps have been abusing this access for almost a decade with little consumer empowerment. Giving consumers control over how their location is harvested, and the tools to make an informed choice about who receives it, is a good first step toward changing a broken industry. In 2015, Brandwatch wrote that location data becoming available from smartphones would reshape the ad industry because of the context about individuals it supplies, but nowhere did it mention whether those individuals had willingly offered that data.

While Android Q doesn’t go as far as iOS 13 does, when both of these updates arrive, app developers abusing the privilege of location access will be exposed for their practices en masse.

The changes are likely to have a massive effect on the advertising industry, which relies on location data to target ads. If you’ve ever wondered aloud whether or not Facebook was listening to your microphone because you saw a creepily relevant advertisement, the answer is that it didn’t need to: It knows who you hang out with, the things you like, and most importantly, where you go.

Now we have the tools to control who gets that data and an opportunity to keep it to ourselves. When you update later this year and start seeing these pop-ups, use them wisely: More often than not, an app’s location permission can be revoked entirely, or at least restricted to “only while using.”

And hey, as a side effect, maybe the ads you see will get a little less creepy.

The Go-To Device To Manage Your Data Securely