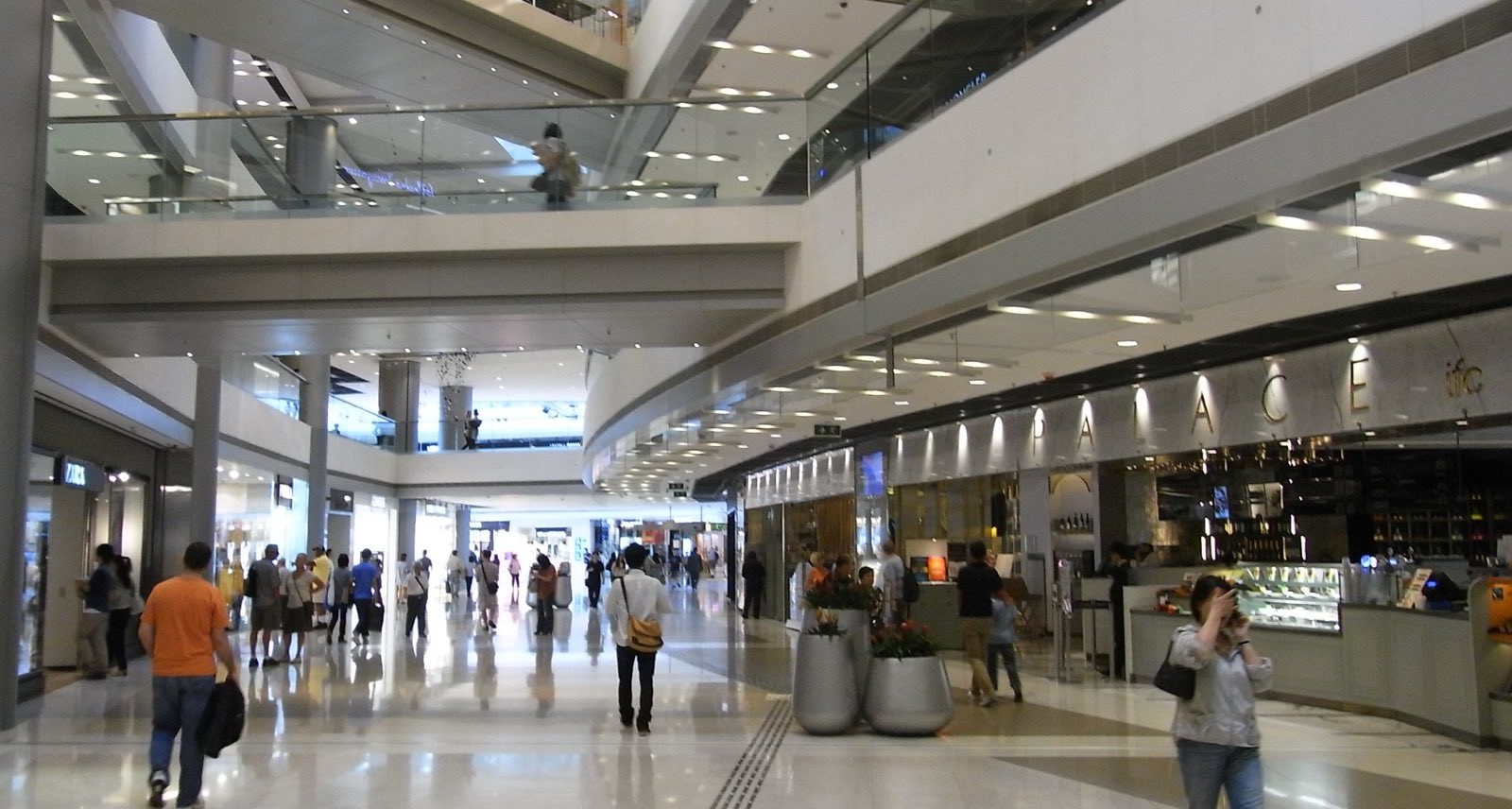 The first whiff of air freshener at the always-heaving IFC Mall in Hong Kong sends me to a serene place. I don’t know what brand the mall uses; it’s certainly not the $6.99 variety I buy from my local drugstore. But the scent tells me that, as long as I’m on the premises, the world is a more enchanting, calm space, even if I’m surrounded by hundreds of shoppers. This mall represents more than just commerce; it’s a gateway into the city itself.

IFC houses enough restaurants, coffee shops, and quiet places for people like me who enjoy the glamour of malls but don’t feel like accumulating balances on their credit cards with each visit to get it. It connects to the business heartland through bridges and underground tunnels; it sits on top of the train station that transports travellers to the city’s international airport in 24 minutes; and, with its location on the edge of the Victoria Harbour, feeds directly into the network of ferries that link Hong Kong to other outlying islands.

Compare this experience with your average — usually suburban — North American shopping complex. Much like airports, malls have developed a reputation for being, at best, a chore and, at worst, an endurance test. During the holidays, the local news is littered with stories of harried last-minute shoppers and parking lots where fights over spaces erupt on a dime. How did something so emblematic of American post-WWII prosperity and chutzpah become such a potent symbol of the country’s decline and a shift in economic power to Asia?

How did something so emblematic of American post-WWII prosperity and chutzpah become such a potent symbol of the country’s decline and a shift in economic power to Asia?

The answer may be as simple as malls losing track of their original mission. Indoor malls were first conceived not as showcases of wealth but as community hubs where, one study suggests, “people would converge for shopping, cultural activity, and social interaction.”

While the United States has every right to claim the mall as one of its own inventions, it was the West Edmonton Mall in Alberta (which opened in 1981) that captured both the super-sizing of the shopping experience with its 800 stores and the experiential element of a destination. It featured a hotel, a park, a miniature golf course, and a church; the latter a clear sign that in the hedonistic ’80s, places of worship couldn’t beat malls, so they joined them.

The average big-city mall, however, followed the classic dumbbell design, with two major department stores anchoring the ends and a row of stores facing each other along an atrium. Food courts were relegated to the subterranean levels and leased to chains, as if to banish the unsightly act of eating from the more noble pursuit of handbags. This left little to no space for communal activities or aesthetic exploration of the space. The model remained successful until the second half of the 1990s ushered in the era of online shopping.

As these changes ravaged North American malls, their counterparts in Asia and in such oil-rich Gulf states as Qatar and the United Arab Emirates retained their original social mandates and evolved into grand experiences. In Bangkok, Kuala Lumpur, Manila, or Dubai, friends and generations of families meet after work at the mall for coffee, a meal, or some aspirational window-shopping — and sometimes just for a shelter from the oppressive heat. Eating options in most malls range from food-court fare to restaurants where reservations are highly recommended.

Don’t get me wrong: consumerism is still part of the mall experience there. But the act of buying and selling goods is better understood in a global context in which booming Asian economies are creating a healthier, better educated and more prosperous population with, for the first time in modern history, a large enough disposable income to enjoy the stores within.

Meanwhile, as the middle class gets more squeezed in Canada and the United States, two types of shopping experiences have flourished: the big box and deeply discounted stores (Costco and Walmart) on one end and luxury brands on the other. Ironically, it’s the high end that is saving the mall, even as this upmarket/ down-market shopping ecology reveals the bifurcated nature of our communities.

Here, Toronto is at the forefront of an interesting trend. Some of the city’s most upscale malls are more successful than others in reinventing themselves as destinations for shopping and as social spaces. At the Eaton Centre, for example, luxury stores (Nordstrom) and fast-fashion outlets (Uniqlo) share walls and shoppers, and better dining options are popping up. Common spaces are being remodelled. Highbrow art is becoming a fixture; as part of a recent renovation to Sherway Gardens, Cadillac Fairview commissioned artist John McEwen to design shimmering steel stallion sculptures that wouldn’t look out of place in a gallery.

Of course, this plays into the mixed messages we in North America have been sending about consumerism. As a Guardian article recently reminded me, when people say that they spend their money on “experiences” and not on accumulating “stuff,” they’re playing a game. Unless the airline, hospitality, and hotel industries are in the business of giving away their services these days, we still buy return tickets, indulge in eating out, and rent places to sleep every time we go for that experience factor. Even when we bring home a mask from a village in Malawi or some loose-leaf Darjeeling tea from a street market in India, we’re consuming products that we later sentimentalize into life-enhancing memories. There’s also something elitist in that trend as travellers, for example, talk about experiences that can’t be replicated or shared with others — though of course they can.

At their best, malls offer a safe and egalitarian space for aspirational commerce. Whether you’re the CEO of a Fortune 500 company or its night security guard, chances are your paths have crossed in the traditional mall. What each bought was and always will be a different story — because it’s not the mall itself but what we do within its walls that gives everyone a true purchase on their cities.