This is a question Jean Verville says he is sometimes asked: “Are you insane?”

And he would like you to know that no, he is in fact not insane at all. Eccentric, perhaps, and certainly unconventional in his thinking, but very much within the bounds of normal sanity, as such things go. Jean Verville is an artist whose medium of choice happens to be housing, and that can be confusing to some people.

Perhaps the best example of Verville’s eccentricity, creativity or (depending on who you ask) insanity is a small apartment near Montreal’s Jean Talon market. Dubbed IN 2, it’s an exercise in monochrome minimalism and trompe l’oeil. The kitchen features imposing matte black cabinets, a black ceiling, black walls, black countertops, and a bright white floor. This severe colour scheme continues through the black-on-black hallway to the black-tiled bathroom accented by a simple white tub and sink, and into the blindingly white living room and bedroom, complete with all-white furniture.

Verville describes the dwelling as a portrait of the quirky, art-loving couple who live there, clients who commissioned the renovation after discovering Verville’s work in the newspaper. “They really like edgy contemporary art, and this is why I proposed this,” he says of the owners. “They are really intellectual. They are not young, but they are like kids… They like to have fun.” While the couple is thrilled with the results (their all-black wardrobes match the home’s decor), not everyone who saw the project shared their enthusiasm. 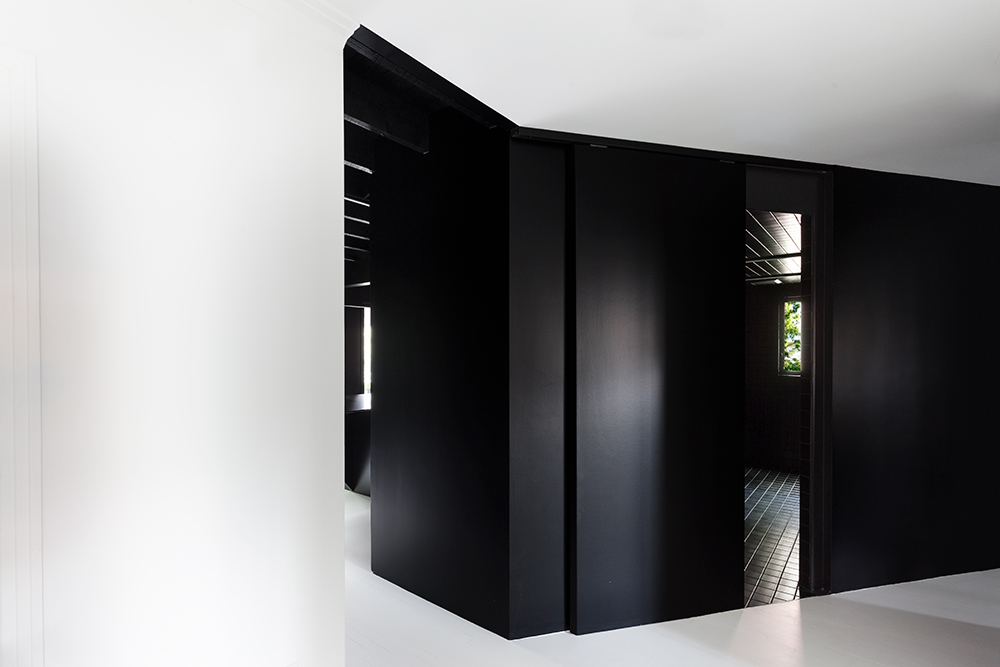 “Is anyone actually going to live there?” wrote one commenter on the architecture website Dezeen. “I suppose if the residents were already legally blind it wouldn’t matter much.” “Interesting, but deeply unsettling,” wrote another. Internet comments are not a high form of discourse, but one can empathize somewhat with these readers’ confusion: this home is unlike anything most people have ever seen, let alone considered living in.

Verville lives and works in Montreal, where he divides his time between his eponymous architectural firm and his pursuit of a Ph.D. in Arts Studies and Practices at the Université de Québec à Montréal. In both his study and his work, Verville focuses on the place where art and design converge. “At this point, my theme is about mixing domesticity, architecture, and art experience,” says Verville, dressed in a black turtleneck and gold, wire-framed glasses. “Where is the tension between art experience and the functionality of architecture? How can we mix them to live in a piece of art, not just a house?” As cities expand, skylines grow ever taller, and architects search for innovative ways to house the world’s booming population, there has never been a more crucial time to reexamine the way we live. Jean Verville’s work does exactly this, using an artist’s sensibility to create domestic spaces that are not just functional, but uplifting, too.

“Don’t worry about the mess. It is a kind of art too.”

“It’s certainly not going to be for everyone,” concedes Omar Gandhi, the Halifax-based architect whose angular, modernist homes have earned him a reputation as one of Canada’s foremost young designers. He counts himself among Verville’s fans, praising the energy, skill, and humour of his work while acknowledging that spaces like IN 2 aren’t what most people look for in a renovation. “It’s very bold,” he says. “But I think that the people who are going to love it are really going to love it, like me.”

Whether you love Jean Verville’s work or not, if you hire him to design your home you have a good idea of what you’re getting into. For the same reason Philip Glass doesn’t compose radio jingles and Ferran Adrià doesn’t run a chain of sandwich shops (although the world would be a much better place if they did), Verville doesn’t design homes like the one you grew up in, unless you grew up on a spaceship in the distant future. He’s certainly capable of more traditional forms, but that’s not where his interest, or inspiration, lies. “What’s interesting to me about Verville’s work is that it’s suffused with theatricality,” says design critic Matthew Hague. “It’s nice to see that kind of showmanship at a time when a lot of designers seem to care primarily about utilitarianism and efficiency, while ignoring the mood and atmosphere that can make a space rich.”

Verville studied at Laval in Quebec City and the University of Montpellier in France, but his work was most significantly shaped by a visit to Japan’s so-called “art island” of Naoshima. Here, artists and architects have transformed empty homes into large-scale artworks, erasing the boundaries between gallery  and installation, and seamlessly combining conceptual art with urban life. “This is the most interesting thing that I’ve ever discovered in my life,” says Verville, still gleeful at the memory of his first visit in 2010. “This is the conclusion that art can be part of architecture and not just decoration. I was like, Oh my god!” Verville has returned to Japan regularly ever since, each time bringing home a wider sense of the potential for architecture to transcend its traditional boundaries.

The influence of Naoshima, as well as that of a new generation of Japanese architects like Takaharu Tezuka and Ryue Nishizawa, is felt throughout his subsequent work. It’s visible in projects like FAHOUSE, a cottage in Quebec’s Eastern Townships, which Verville created for a young professional couple and their children. The house appears as a massive triangle atop a glass box, its A-frame roof clad in matte-black corrugated steel, like a Darth Vader helmet plunked in the middle of the forest. The interior, however, is a warm expanse of pale baltic plywood and natural light, punctuated — lest things get too serious — by an entryway painted, floor to ceiling, in a deep shade of raspberry pink. 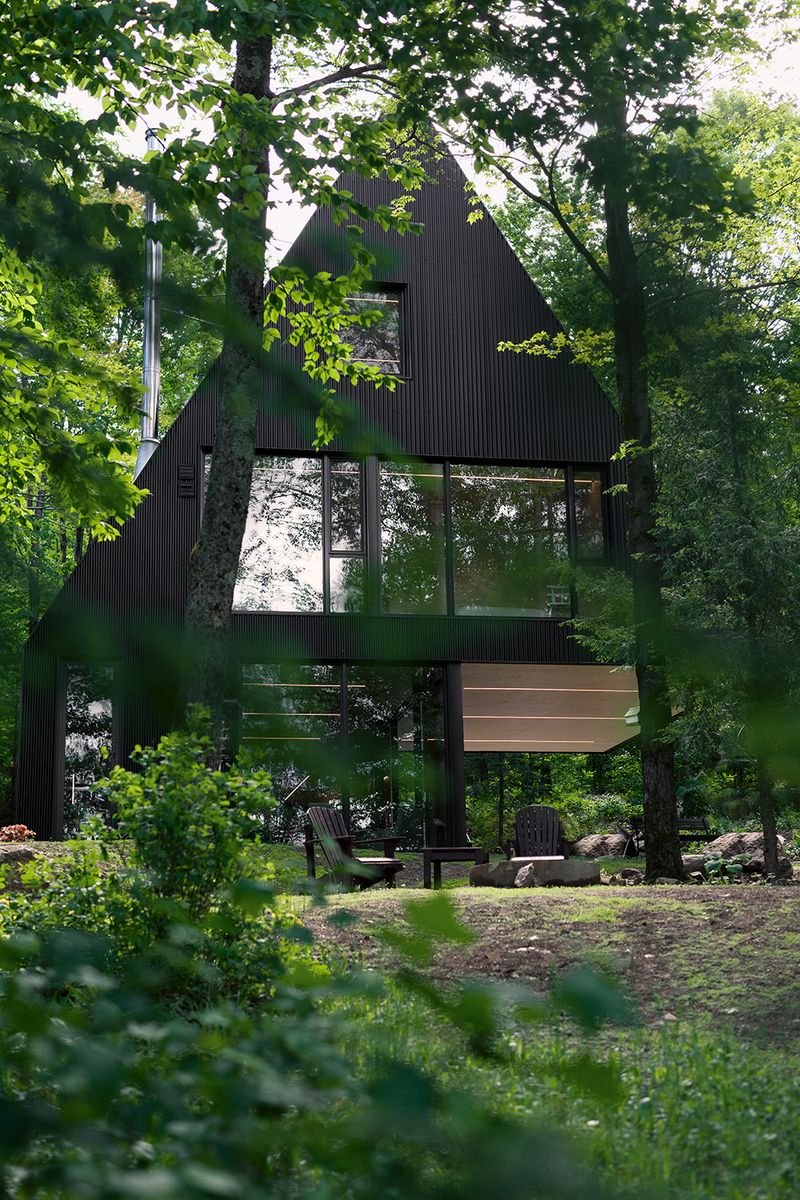 The publicity photos of FAHOUSE, in what would become something of a trademark for the architect, feature him prominently. In one shot, his torso is draped over an atrium; in another, he hangs sideways off a built-in bunk bed. Bespectacled and dressed in black (with the exception of a pair of fluorescent sneakers) he looks like a part-time modern dancer or a member of a German new-wave band. Verville doesn’t suggest he had viral marketing in mind, but it’s hard to imagine a better way to present such an unconventional living space than with equally unusual photos. Publications like Architectural Digest and New York magazine took notice, and Verville’s celebrity grew.

Thanks to a trio of projects he presented last year, of which IN 2 was the second, Verville has established himself as a designer who is creating a new kind of living space. IN 1 reimagined his backyard garage as a lofted studio with planes of eye-popping textured oriented strand board covering every surface, contrasted by a few pieces of simple matte- black furniture. IN 3, meanwhile, is an apartment Verville designed using a similarly monochromatic palette of white and grey, and is just as devoid of furniture, save for a grand piano, a green-upholstered sofa, and a pair of clear plastic bar stools. Raw concrete surfaces, grey stained-wood floors, and LED pendants suspended from thin cables all contribute to a sense of weightlessness, while a floor-to-ceiling band of brass panelling provides a counterbalance of heft and warmth. Verville appears in the photos dressed in a long, flowing black cape: a Quebecois Count Dracula, with his face hidden from view. 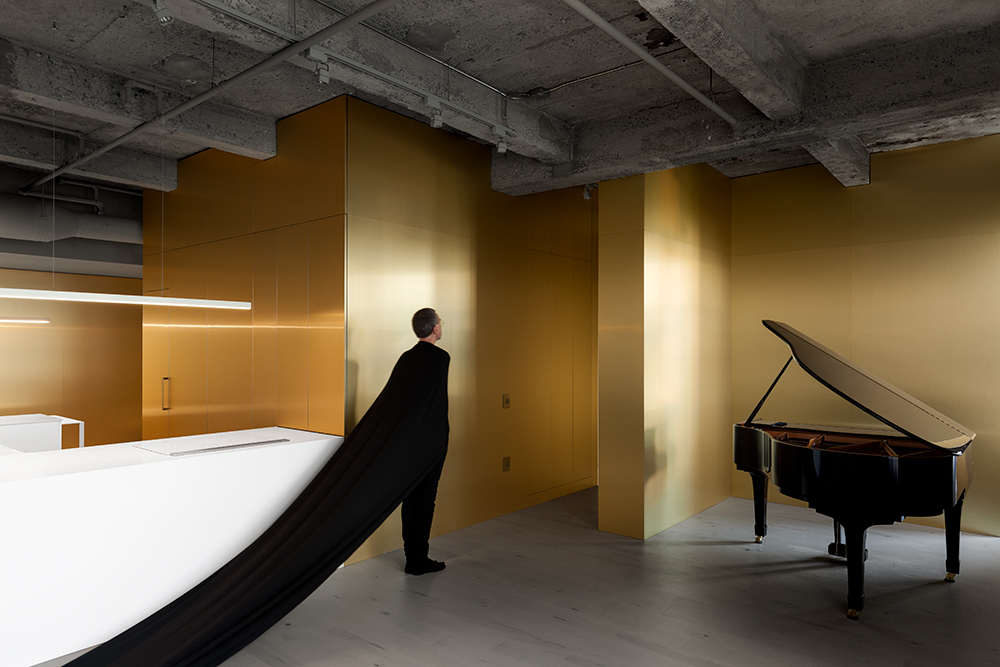 Architecture isn’t Verville’s only medium, but the works of art he’s displayed in museums and galleries show a similar fascination with reimagining conventional spaces. In Dance Floor, a 2016 installation at the Montreal Museum of Fine Arts, Verville transformed a street outside the gallery into a sea of golden footprints. “He has a great sense of imagination and playfulness,” says Diane Charbonneau, a curator who worked with Verville on
the installation. “It was a really immersive experience… taking something ordinary and transforming it. He wanted people to engage with the street by dancing!”

This was just the kind of unexpected whimsy and artful reimagining the owners of FAHOUSE wanted for their cabin in the woods. While they loved the idea of Verville’s angular spaces and sparsely furnished rooms, they were skeptical of how the messiness of their lives as a family with small children would fit into such a minimalist fantasy. Verville’s answer was simple, yet brilliant. “You can leave any of your children’s toys on the floor,” he says, still tickled by the notion. “It becomes a kind of sculpture.” Stark, minimal spaces, Verville says, needn’t be at odds with regular life. The mistake we make is thinking about these homes as a roof and walls that contain us and our stuff. Instead, he says, they are a frame. “Don’t worry about the mess,” he says. “It is a kind of art too.”

Jean Verville is an architect who designs for the future, and in his utopia, we’re no longer bound by age-old notions of what a living space should be. Instead, we’re free to redesign them entirely. By turning a house into a piece of art, we are free to ask questions: what’s necessary here? What makes sense? How can we live in a small space without drowning in clutter? What would add a sense of joy? While the architect in Verville may yearn for a future of monochrome surfaces, blank walls, and matching black jumpsuits, the artist in him is under no misconceptions about the messiness of the present. For Jean Verville, that’s all part of the fun.

Men Get Sad After Sex. Now We Have a Concrete Answer Why. And it’s not exactly what we thought