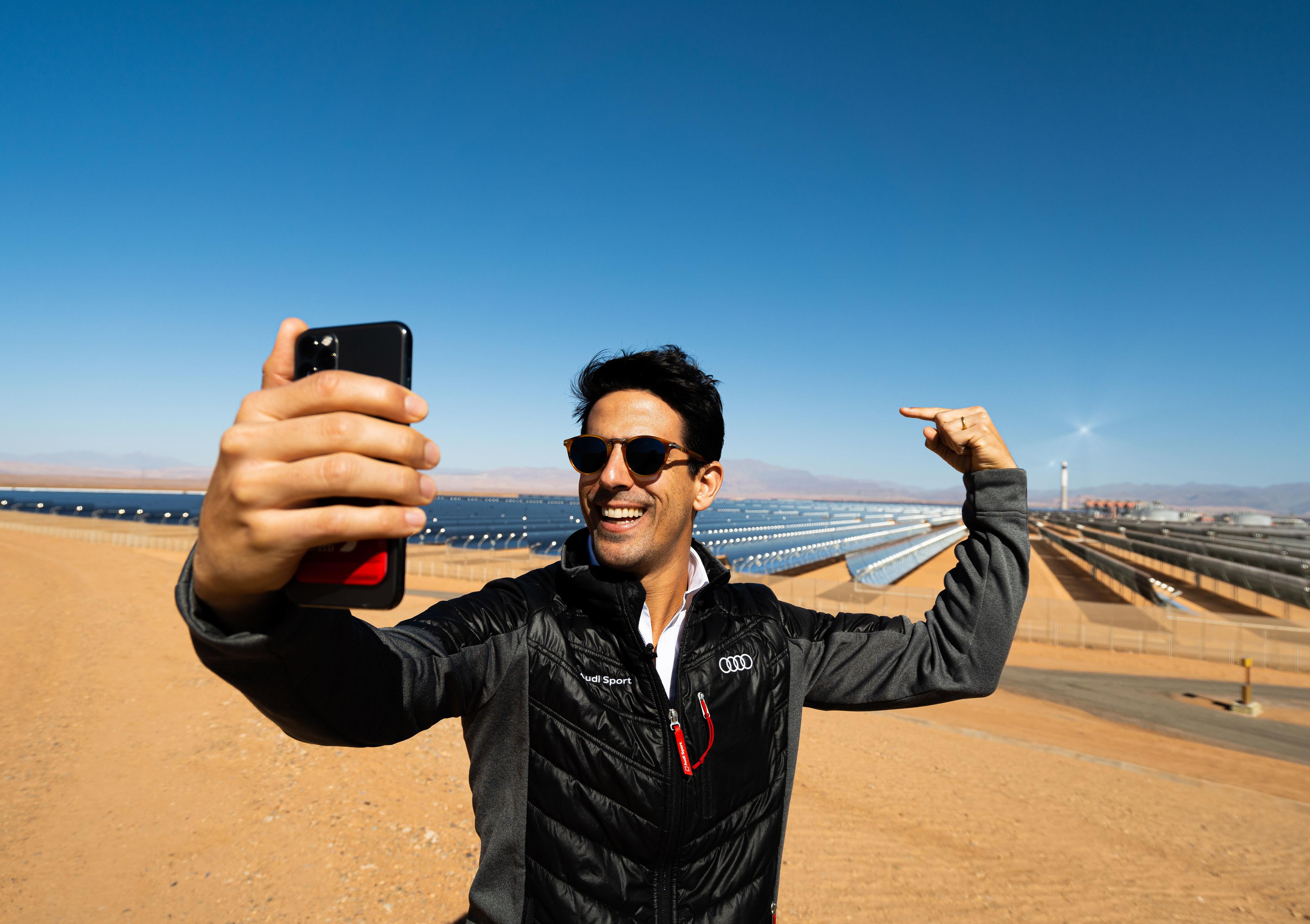 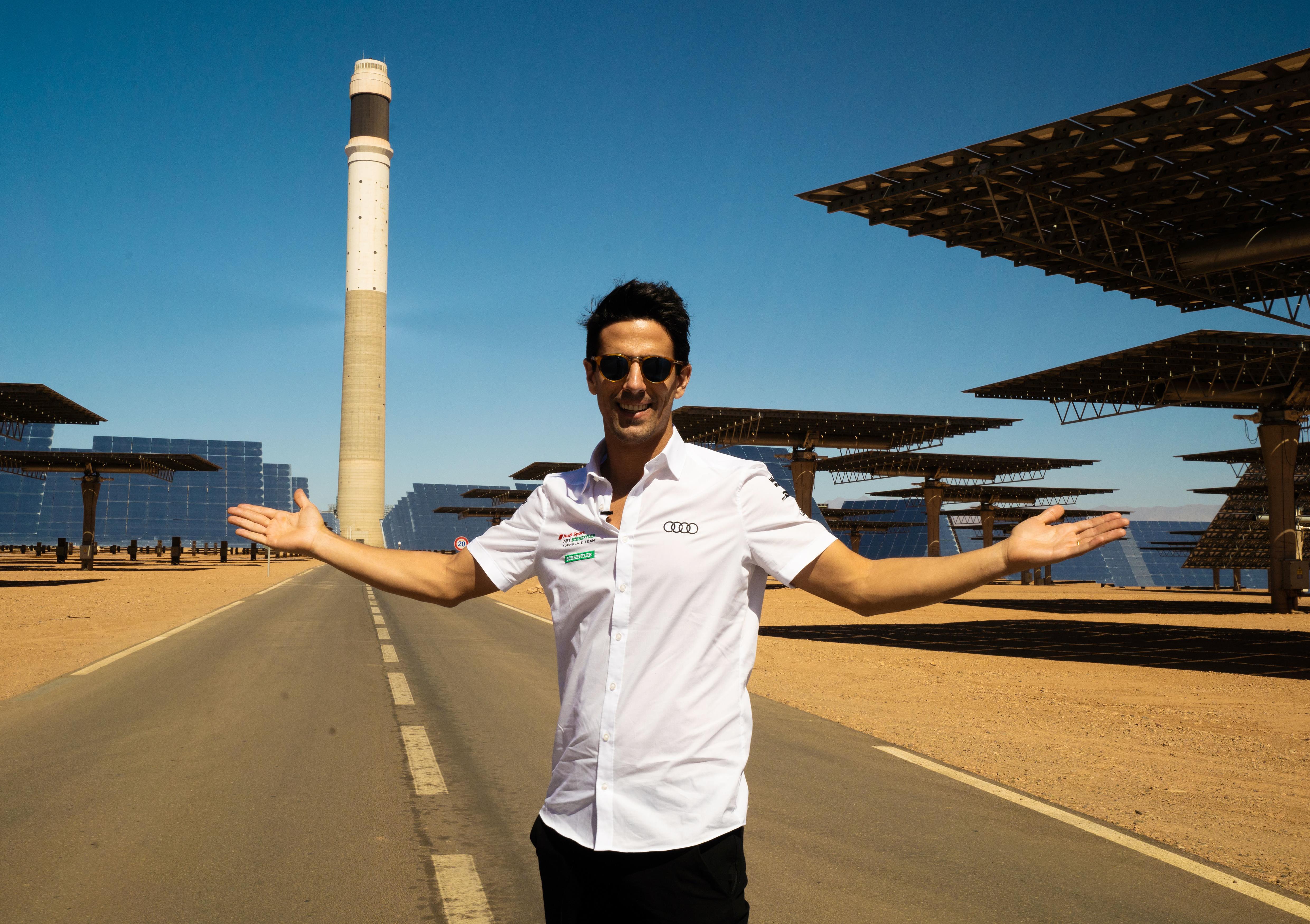 Audi already operates the first of its plants using sustainable energy in Brussels (Belgium), Györ (Hungary) and San José Chiapa (Mexico). Solar power has a very large share in this. Lucas di Grassi used the race in Marrakesh to visit the world’s largest concentrated solar power plant. The Noor Solar Power Complex in Ouarzazate is located about 200 kilometers from Marrakesh, behind the Atlas Mountains. The sun shines here – with few exceptions – 365 days a year. The site is therefore perfectly suited to the 7,400-acre facility with its solar panels that cover an area of 3,500 soccer fields. “To see this incredibly large area was extremely impressive,” says Lucas di Grassi, who had all the details explained to him by the operators of the trend-setting plant. “The solar power plant generates twice as much energy each day than what is needed in Marrakesh.” During the tour, he also discovered a common feature with his Audi e-tron FE06: the high- precision bearing technology for solar mirrors is also coming from Audi technology partner Schaeffler. 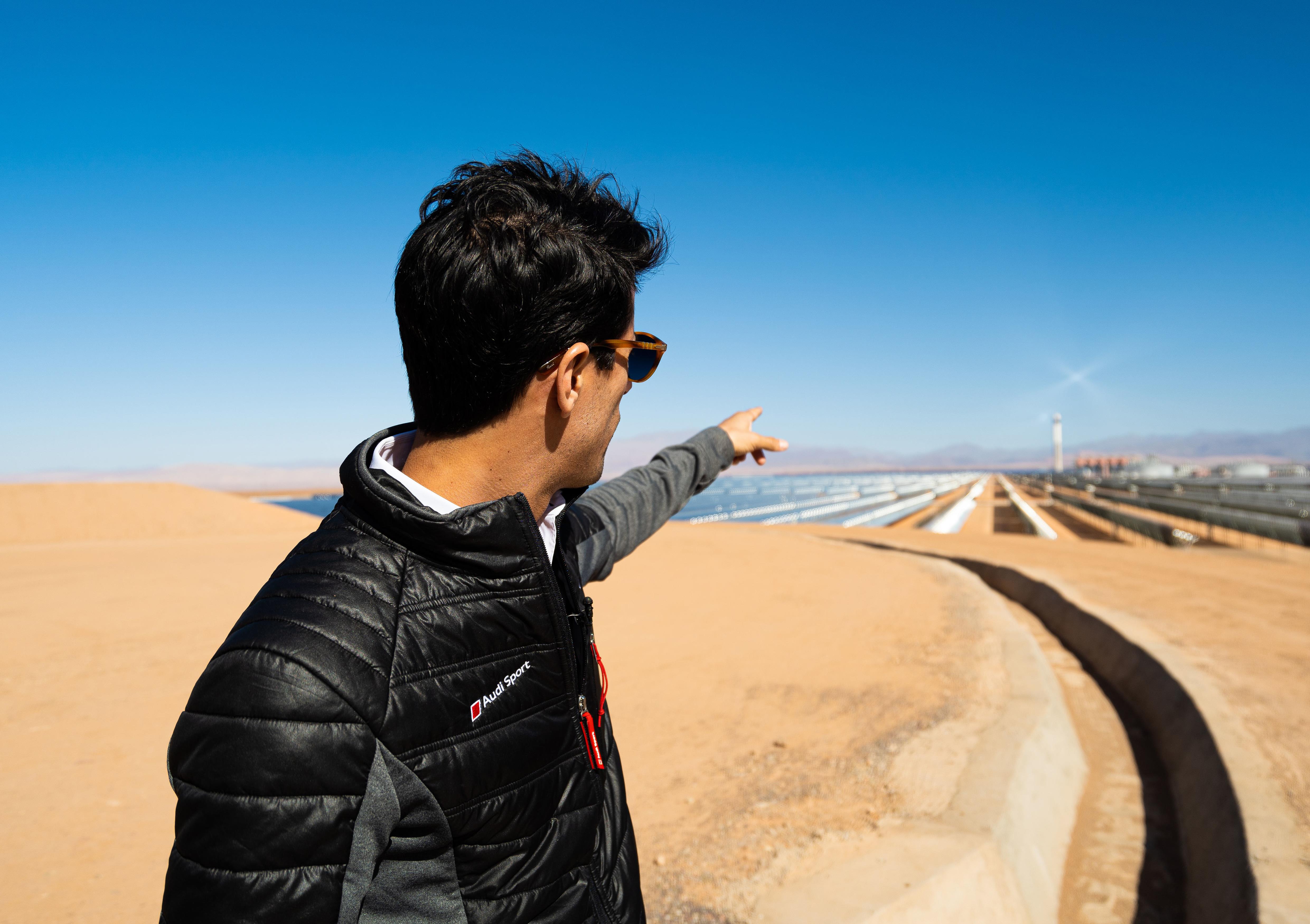 At his birthplace, São Paulo (Brazil), Lucas di Grassi has launched the Zero Summit – Latin America’s first congress on technologies and ideas that ensure CO2 neutrality. The event will take place from October 6 to 8. “Audi will use the Zero Summit, among other things, to introduce the Audi e-tron Sportback in Brazil,” says di Grassi. 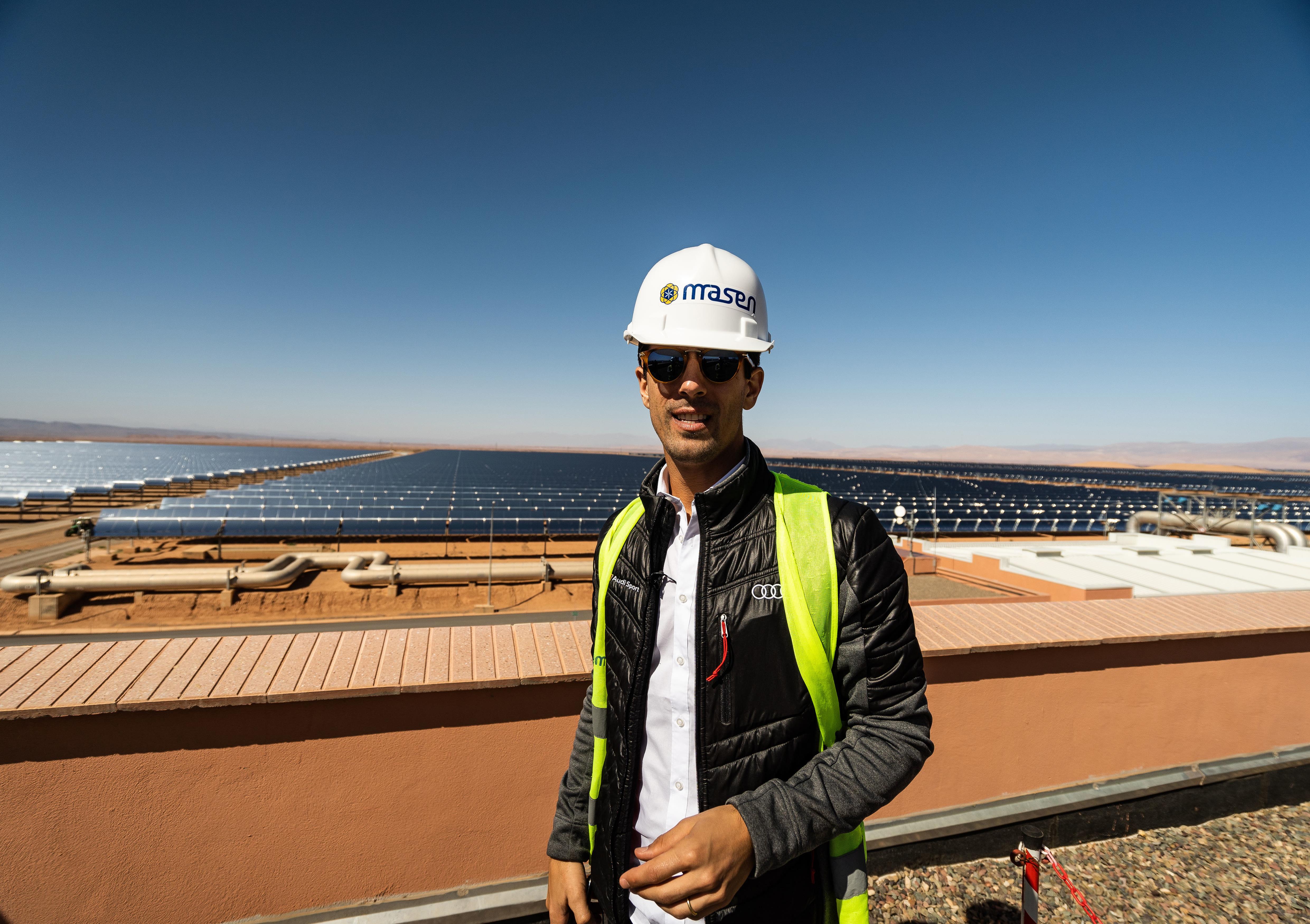 Between the two Formula E races in Mexico City and in Marrakesh, Lucas di Grassi made a detour to the German capital for the Berlinale. The Audi Formula E driver and climate ambassador for the United Nations discussed ideas, technologies and visions for a more sustainable future in various areas with journalist Birgit Heidsiek and film producer Antra Cilinska at a panel discussion, which was held under the motto of: “The show must go green.” 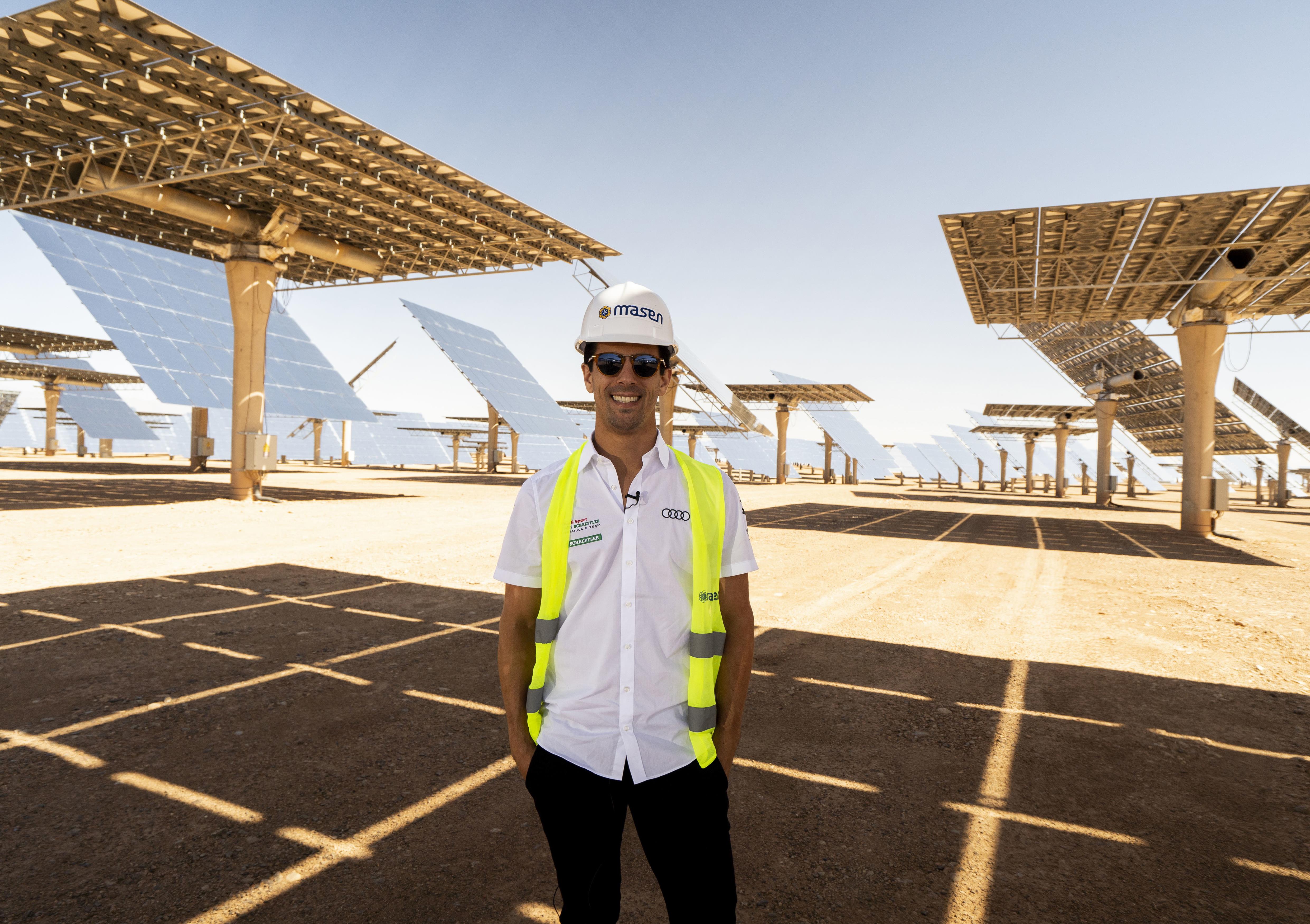 The days between the two Formula E races in Mexico and Morocco were unusually quiet for Daniel Abt. The German recovered in his hometown of Kempten from the consequences of his huge practice crash in Mexico City. “The first three days were hard, after that things fortunately got better and I am glad to be fit again so quickly,” says Abt. “I worked with my physiotherapist every day – although he couldn’t do much at the beginning. The inflammation in my muscles first had to subside by itself.”

During the morning track walk in Marrakesh on Friday, Daniel Abt and Lucas di Grassi were mainly concerned with identifying where the asphalt has changed, new bumps have been created and how the curbs were fitted. “This is a semi-permanent race track on which we’re driving for the fourth time already,” say the two Audi drivers. “This is why the track walk here is different from the other city street circuits. The track is always the same and the data in the simulator is also accurate and up to date.” 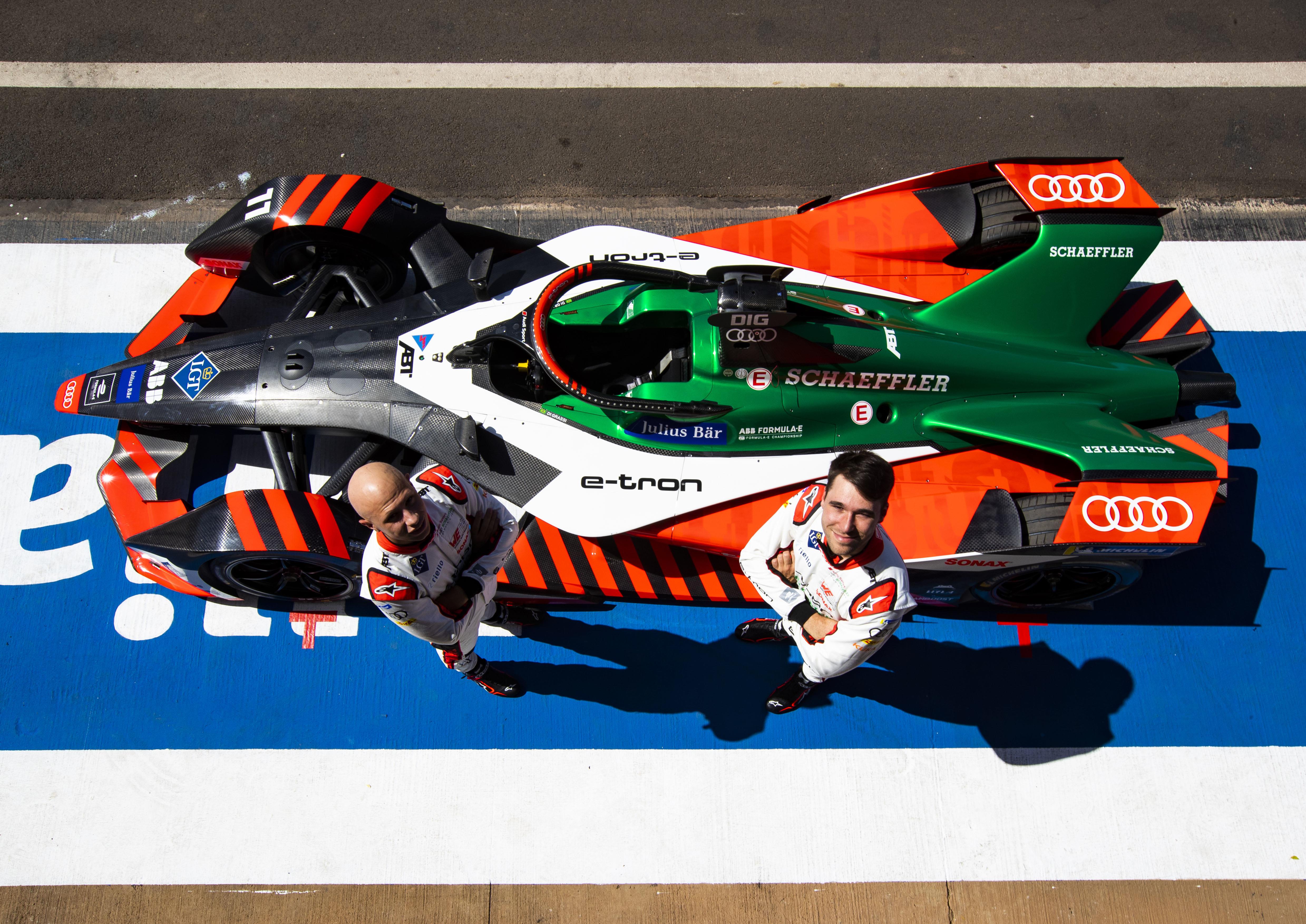 Mattia Drudi and Kelvin van der Linde were also present at the track inspection for the first time. The two GT3 drivers from Audi Sport customer racing will be sitting in the cockpits of the two Audi e-tron FE06 race cars at the Formula E rookie test in Marrakesh on Sunday: “They are both very committed and ask a lot of questions,” says Daniel Abt. “We are trying to support them in the best possible way, because it is good for us if they are optimally prepared for Sunday. Their feedback after the test is very valuable to us, given the limited testing possibilities in Formula E.”