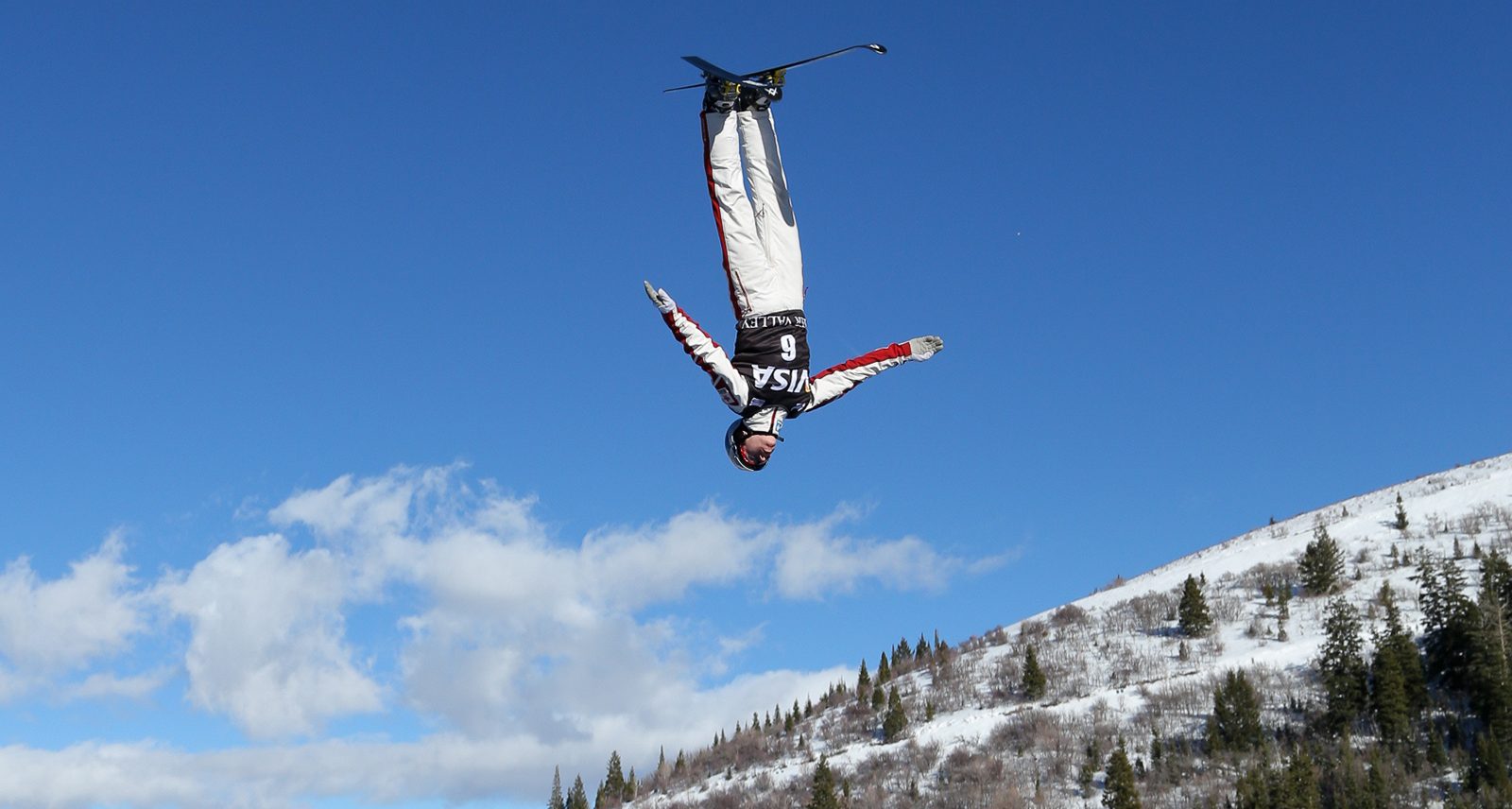 Travis Gerrits is almost as influential as a mental health advocate as he is a badass freestyle skier - and that’s saying something, considering he’s a FIS World Championships silver medalist. The 27-year-old, small-town boy from Milton, Ontario wears many toques: he’s an Olympic athlete, a role model for Canadian youth suffering from mental illness, and quite the adventurer. He’s also a strong believer in authenticity. Gerrits has spent the last couple years sharing his personal battle with bipolar disorder with the public - and he encourages others struggling to share their truth as well. It’s a story that’ll touch the maple-syrup-pumping hearts of his fellow Canucks.

Gerrits recently opened up to us about battling mental illness while being a professional athlete, this weekend’s RBC Race for the Kids, and *spoiler alert* his retirement from sports - although he is still, and will always, be chasing adventure.  (Hey, if I finished seventh at the 2014 Sochi Olympics, had a successful professional athletic career under my belt, and travelled a good part of the world before the ripe age of 30, I’d retire too.)

How did you get your start as a freestyle skier? Was this always what you thought you were going to do with your life?

It’s kind of interesting. Growing up in Milton, Ontario, it’s not the most famous for big ski hills and especially acrobatic sports. But living on a two-acre property at home, my little brother and I, we learned how to ski in our own backyard pretty much. My mom put me in gymnastics when I was two. Dad put me on a dog leash and pushed me down the ski hill on my first pair of skis at age six, and I ended up competing in trampoline at a national level. And at that point I was like, ‘Well why not combine all the acrobatics that I had learned through gym, trampoline, and all that stuff with the skiing skills that I’d picked up over the years?’ So I had that first flip on my skis in my own backyard at 10, and then from there we started travelling a lot more and going to Quebec where the infrastructure and the facilities [for freestyle skiing] are incredible. I fell in love with just doing crazy flips and perfecting the next thing to get to the Olympic level.

That’s awesome. I read the piece you wrote for the CBC in 2017 about your bipolar diagnosis. It was a really brave and raw piece. But what made you decide to be so outspoken about that?

I think, for a long time, hiding the fact that I was experiencing symptoms of mental illness probably only worsened the symptoms themselves, so it was really first about opening up with my coaches and my family. And, you know, if you open up to those that are close to you then you inevitably can open up to the public. And that mission of mine at that time was definitely to just continue having open conversations with everyone to minimize any stigma that is present in today’s society. And then, only hope to share the good that can come from sharing a story and supporting great causes. At the end of the day, I’m not my sport of freestyle skiing and I’m not any diagnosis, per say. I think there’s a lot more to us as humans than any one thing. To be able to show that, and that you’re still capable of doing incredible things whether it’s on skis or in your life, it was an important story to share. That’s why I partnered with RBC for causes that are close to my heart, like supporting youth mental health and mental health as a whole. I’m sure doing triple backflips on a daily basis takes a lot of mental strength. How are you able to pull that off despite your illness?

I think in a way it’s part of my personality, which is like all-or-nothing. You know, I like to perfect things. Not all symptoms are what I would call helpful, but some definitely push me to learn more about myself and then learn what I’m capable of and my limits as well. So it was really understanding that my balance in not only sport but life as a whole actually helped increase my performance and elevate my ability to perform triple backflips. I knew at the end of the day, I was going into this jump at 68 kilometres per hour and that my preparation and all of the aspects and variables that are taking place on the hill have been accounted for. And then, it’s knowing you’re in a safe environment, where you’re free to fly.

Do you think there are more athletes like yourself who do suffer from mental illness but we just don’t know about it? And do you think sharing your story might help others speak out as well?

I think it definitely already has [helped]. There are a lot of athletes out there even before me that were speaking out about mental illness and just mental wellness. You think about individuals like Clara Hughes and in ways they’re great inspirations for me to have shared my story. I think there are a lot of other athletes out there and a lot of people that may suffer in silence. Whether they need to share their stories…as long as they’re able to share those stories and they don’t feel condemned or compelled to keep that inside. And I can only hope that everyone is willing to share in a way and to a certain extent that allows them to continue to enjoy life and perform and have fun and build relationships and just stay well.

Last year the NBA launched their Mind Health campaign with the aim of reducing stigma and offering resources for people dealing with anxiety, depression, and stress. Are you starting to see a real difference in the conversation?

I think so. That conversation is definitely going towards a lot less stigmatization behind it and there’s a lot more support that’s actually coming out. And now as athletes, I feel like we don’t necessarily have consequences when we do decide to share that story. We find the support in our networks around us.

I didn’t realize that 1.2 million young Canadians struggle with mental health issues. Do you feel like these issues are being dealt with effectively in Canada?

And that stat is even more intense because it’s 1.2 million young people and only one out of five are actually getting that help that they need. So there is still a lot of work that needs to be done but it’s about uniting through any which way we can and supporting the programs that are out there to help continue that trend towards making that difference. And we’ve seen what good that has done already. You know, the RBC Race for the Kids in Toronto alone is now in its seventh year and each year an incredible amount of support is coming out. And then those funds go directly towards the Family Navigation Project at Sunnybrook, where they’re incorporating the family dynamic into addressing youth and their mental health as a whole. It’s so important to see that the trend continues to go upwards. For sure. So like you were saying, there is the Race for the Kids on September 14th and thousands of people are going to show their support…

Wow. I mean, it’s nice to know initiatives like this happen. But do you think there are enough?

How might you encourage people to seek support and help, especially those who feel shame in asking for it?

Navigating the mental health system is definitely not easy and that’s something that I struggled with. But it’s exactly why I like to support causes like this, where you see that family navigation project and taking approaches that understand the family dynamic in which they also live. So, it’s about realizing that we need to lend a helping hand to others and not be scared or hesitant to ask for help and to search for it. And with so many people now sharing their stories, you have hope to find that help, which is really exciting and a way to see how far we’ve come yet know that we still have a ways to go.

Just to switch gears a bit, how are you preparing for the next Winter Olympics? I’m sure a lot of your time and focus is spent with these initiatives but I’m sure you have some other great goals.

Yeah, of course. So actually, right now it hasn’t even been officially announced but I am retired. Just recently. So that’s very exciting for me to live an incredible career. I think I was on the national team for about 14 years now. To have been able to travel the world — it was just an incredible opportunity to share stories with everyone. And now that transition period is something that a lot of other athletes do struggle with in itself, and it’s understanding that what comes next isn’t necessarily defined or very clear but to always chase adventure for me is how I live my life. So, I’ve been working for my father’s company for a little bit. I had finished a project management certificate at Stanford University as well, so you know, I’m keeping doors open. And always just having fun. I do lots of crazy stuff, whether it’s cliff jumping…but I’ve been able to explore all of Canada now, which has been amazing.

Yeah, I saw on your Instagram that you have been doing a lot of travelling. What was your latest adventure, what’s been your favourite, and what’s your next one?

My latest adventure was Tofino. I’d done a cross-country tour for work purposes but I had a lot of downtime and fun. I really enjoy photography so I was taking pictures on Long Beach in Tofino, you know, of everyone surfing. I didn’t get to surf that day but the cliff jumping out there was insane. Am I allowed to use that word, insane? My favourite adventure, of all time? Oh my goodness. Probably when I spent a month in Switzerland with my brother. It had been after an injury and I was on a no-fly list at the time because of my lungs — I had damaged them so I couldn’t fly. But my brother flew out and we spent a month exploring all of Switzerland, which was probably my all-time favourite not because of necessarily where we were but who I was with. So it’s celebrating time with family and that was awesome. My next adventure…I have to go to Montreal. So I’ll spend some time out there, visit some friends as well and my Quebec family. Who knows!