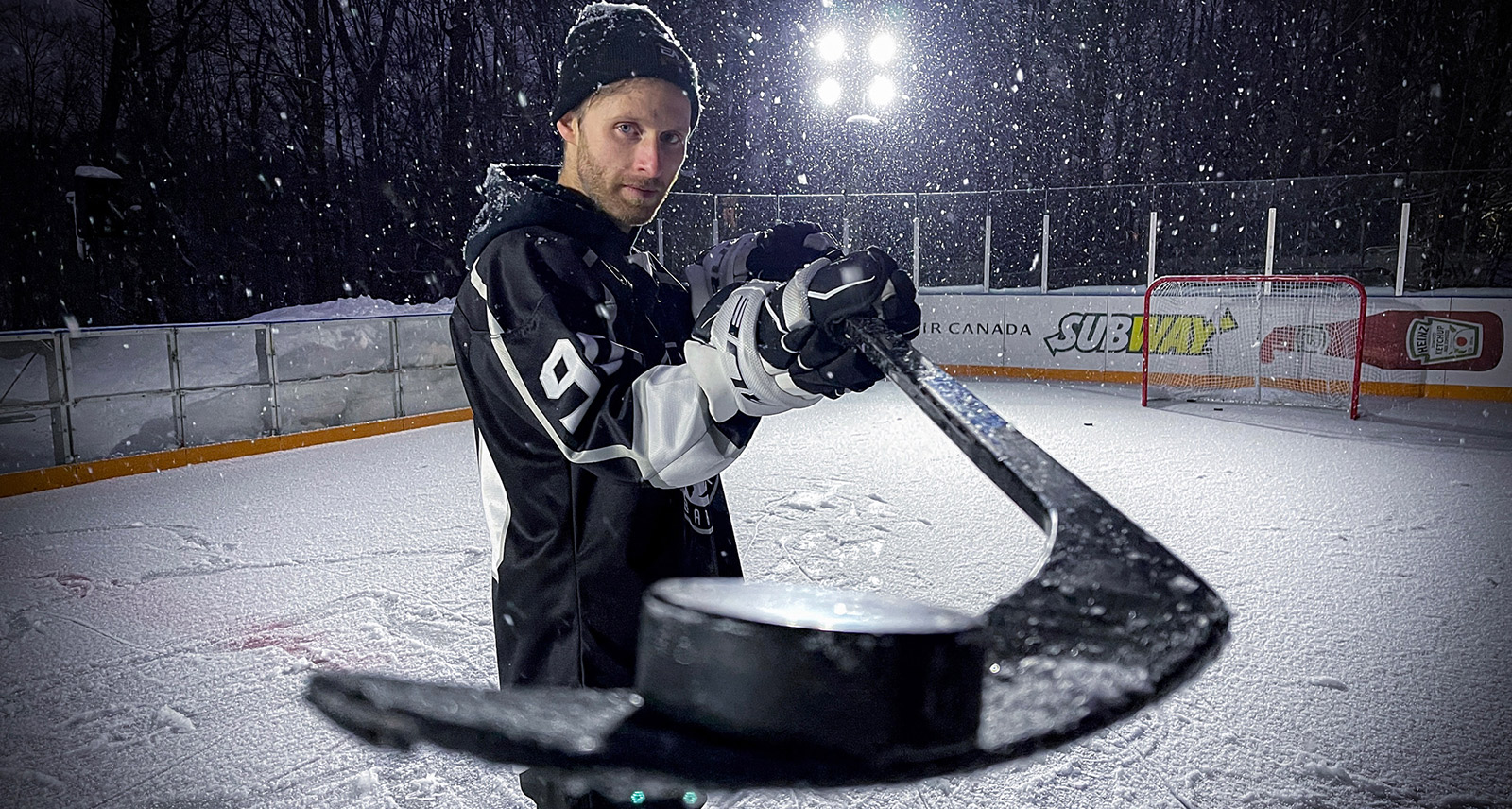 If you have a passing interest in hockey, you’ve likely encountered Pavel Barber on Instagram, YouTube, or TikTok. The stickhandling expert has become something of a social media sensation for his gravity-defying trick shots, and his ability to explain the intricacies of last night’s hockey plays, from the slipperiest dekes to the most accurate snipes, in a digestible manner. Naturally, both kids and NHLers alike (Jonathan Toews, Jake Virtanen, and Charlie Coyle, among them) now turn to Barber to help fine tune their abilities with the puck.

SHARP caught up with Barber to discuss his obsession with stickhandling, playing shinny on Lake Ontario, and how anyone can improve their game, on or off the ice.

You’re a self-described “stickhandling specialist”. How did you become so good at controlling the puck?
I noticed that the biggest skill separator for the elite players was their puck-carrying abilities or stickhandling. Skating is number one, but I saw a lot of great skaters that just weren’t nearly as effective as the players who had great skating and good hands. And when I was a kid, I noticed there wasn’t much [stickhandling] information online. I started watching Pavel Datsyuk, who is arguably the best stickhandler of all time, and trying to mimic what he did. It just became this obsession for me to try and piece together what made a great stickhandler, and how could I break it all down in a way that was easily understandable to me so that I could learn it? And now as an instructor, how can I deconstruct it for an 8-year-old to learn?

It’s hard to imagine that, in Canada, there are any untapped hockey markets but you may have found one.
There are thousands of skating coaches in Canada, at least. But there are very few who specialize in puck control skills. Granted, a lot of skating coaches teach the basics of stickhandling a little bit, but they never get into how to do a toe-drag, how to pull [the puck] between the legs, how to chip a puck up. That’s where I come in.

Was becoming a social media star a clever marketing plan for your coaching business?
It actually wasn’t intentional! I was filming videos for my own enjoyment long before I posted them to YouTube. I’d film myself doing shootouts or stickhandling drills and watch them.

How important a tool is video for improving one’s game?

I rely on video a lot, especially with the NHL players because they’re on the road all the time. Video, to me, is one of the most important aspects of teaching. We all think we know what we look like, but then we watch ourselves on video and it’s completely different. Video never lies. I constantly use my iPhone for slow-motion video. Slow-motion really helps us correct the errors that we make but don’t notice [in real time].

What’s the secret to getting smooth footage out on the ice?

[With the iPhone 12], you don’t need a gimbal to stabilize, even when you’re skating the full length of the ice. There’s no choppiness. [The video] is super smooth.

It looks like you’ve had plenty of fun this winter. Where are you finding all these rinks?
I had just moved back to Toronto when the outdoor [public] rink season was cancelled, but I knew that I had to find a way to get out on the ice this winter because otherwise I’d just go insane. I’ve got a contact at Lake Ontario who lets us know when the ice is good. We go out there and have a blast. I also have a lot of clients who have sick backyard rinks. Normally, I don’t have the time to bounce around to see all the rinks, but I’ve been able to with my travel camps shutdown. And it’s been breathtaking. People have big rinks in and just outside of Toronto. Nice rinks with boards and lighting. It’s crazy and it’s been a great time.

How the Tyson-Jones Jr. Fight Represents the Allure and Inadequacy of Nostalgia