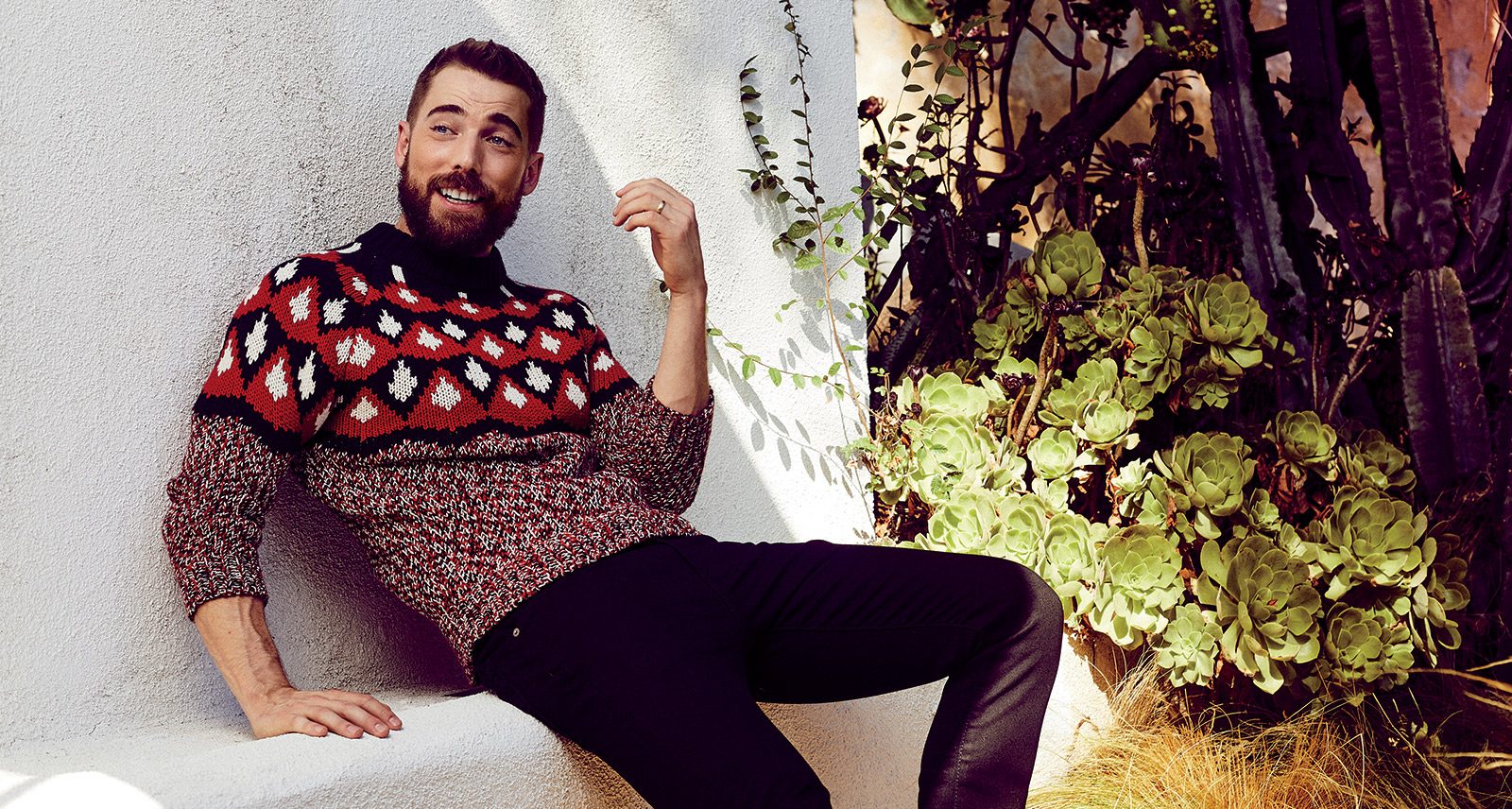 THIS STORY FIRST APPEARED IN OUR NOVEMBER 2020 ISSUE.

The LA sun beats down as Dustin Milligan rolls up to the shoot in a bashed 1970’s pickup truck, attempting a tricky uphill reverse parallel maneuver. Much like his Schitt’s Creek character, Ted, Milligan radiates cheer, despite the heat and a wardrobe consisting primarily of heavyjackets. It’s a definite contrast from his hometown of Yellowknife, Northwest Territories. Everyone on set is keen to quiz him after Schitt’s Creek’s nine-award sweep at the 2020 Emmys just the other week. SWEATER (PRICE UPON REQUEST) BY AMIRI; PANTS ($90) BY LEVI’S

Adam, the stylist asks, “Why do you think people like it so much?”

“It’s a very ‘nice’ show,” says Milligan. Going into it I don’t think peo- ple realized how much we needed a really nice show. There’s a lot going on in the world, and it’s a reprieve from a lot of the negativity, the hate, the animosity that seems to be so prevalent, overflowing.” The show wrapped this year after six seasons, though Dustin agrees with the producers’ decision to stop while ahead. “Usually a show will pop first and then sort of go on a decline, but we did the exact opposite,” he says. “We ended on a high. I think as much as people are sad that it’s over, the fans actually appreciate it.”

Several winter jackets later, Dustin dons a turtleneck as the sun sets over our Mediterranean-style villa. Quizzed about his usual fashion choices, Dustin argues for comfort. “Not even physical comfort, but feeling comfortable with what you’re wearing. That takes a level of not giving a shit what other people think.” He admits to owning a sweater with a giant gummy bear print, a nod to his love of Swedish candy-mak- er, Haribo. As we walk back to his perfectly parked truck, we discuss the simi- larities between him and his on-screen character Ted. “He’s constantly making these terrible dad jokes and puns,” he says. “That’s something I do in real life and it’s been such a treat to have that aspect of the charac- ter celebrated. It’s so gratifying to know that people are forced to endure these terrible, awful wordplay jokes scene after scene that I’m in. I really get a kick out of that.”

As he drives off into the sunset, Milligan leans out of the truck and yells out behind him, “I used to hate facial hair, but after awhile it really started to grow on me.” TURTLENECK (PRICE UPON REQUEST) BY CANALI; PANTS ($1,035) BY MONCLER

STYLING: ADAM BALLHEIM (THE ONLY AGENCY)