In the beginning, there was only Lamborghini. Marcello Gandini, a designer working for Bertone, and two engineers — Gian Paolo Dallara and Paolo Stanzani — created the first supercar in Sant’Agata Bolognese in 1966. Ferruccio Lamborghini wanted something radical, a racecar for the road. They called it the Lamborghini Miura, named after a famous fighting bull. It had a 12-cylinder engine mounted longitudinally behind the driver and a shape that would make Botticelli weep. It was, by all accounts, terrifying to drive.

And drivers saw it, and it was good.

Stanzani and Gandini went on to create many of the most terrifying and desirable cars the world has ever seen. Lamborghinis became known as edgy, angular cars that granted the bare minimum concessions to the driver — they were built for speed, and nothing else. (This was a time before air-conditioned cabins, power steering, or ergonomic seats.) The pair did the Jarama, Espada, Uracco and finally the Countach, another masterpiece. It was a difficult car too: reluctant to turn at any speed, and, as Lamborghini’s test-driver once told Motor Trend, praying was more effective at slowing the car than the brakes.

Ferrari followed Lamborghini, creating supercars of its own, which arguably became more famous — and certainly more valuable. But although the cars from Modena came from the same basic mould those three men invented with the Miura, Ferrari’s cars — and nearly all subsequent supercars — soon veered in another direction. Supercars became softer, easier to live with, less dangerous; because, why wouldn’t they? Lamborghini — whose crest is a golden raging bull — remained true to the Miura, to the idea that the true purpose of a supercar should be to scare the shit out of its driver. After all, it’s when we’re closest to death that we feel most alive.

Today the company says the goal is to “surprise” the driver, but that’s a euphemism for the same thing.

After taking part in the Miura’s 50th anniversary celebration, Paolo Stanzani died in January. He was 80 years old. His successor is Maurizio Reggiani, the director of research and development at Lamborghini, a post he’s had for 11 years now.

Reggiani remembers what it was like when the Miura was unveiled. “You must imagine: in the ‘60s, in Italy, it was the time of Fiat 850,” he says. That Fiat was a tin can with wheels, basic transport. “Compared to that car, the Miura was a rocket, something from space!” It is a symbol of the Italian miracle, the rapid postwar transformation of Italy from a poor, rural place to an industrial powerhouse. “The Miura is really a wild car. You have a perception that it is a wild beast.” Seatbelts were an optional extra, one your typical ‘60s supercar buyer would’ve seen as unnecessary and wimpy. Naturally, Rod Stewart ordered his Miura with seatbelts.

“It was a match between a marvellous engineering architecture and a marvellous design,” says Reggiani. “It was only because of this architecture that Marcello Gandini had the freedom to draw a silhouette like Miura.”

To get into Lamborghini’s latest supercar, the Aventador S, you have to write a cheque for $463,775 (and in truth, most owners spend much more, supersizing the amount of carbon-fibre trim and leather quilting). I was lucky enough to sample one on a racetrack in Spain earlier this year. No chequebook required.

The Aventador is as wide as a truck but only three-and-a-half feet tall. I fold my body in half to avoid smashing my head on the roof, which will instantly ruin the driving-away-in-a-Lambo buzz. The seat doesn’t lean back enough and my head is nearly against the top of the car. My view out is compromised by the wedge-shaped front end — a Lamborghini trademark — which prioritizes style over being able to see pedestrians.

Unlike the Miura, seatbelts and power-steering are standard, which makes the experience a bit more comfortable. But then, the Aventador S has power and grip the engineers of the Miura wouldn’t have dared to imagine. The “S” is an upgrade over the regular Aventador, with 30 extra horsepower. The spec line reads 730 hp; frankly, it didn’t need the extra boost. No batteries. No turbos. No hybrid system, just one huge engine.

Behind a little glass window over my right shoulder is the massive, fire-spitting V12 motor, the heart of the Aventador. The engine shakes violently as it roars to life.

Flick the shift paddle to get first. Clunk. Trundle out of the pit lane. Accelerate and aim for the first corner and oh shit, I’ve missed it. I brake too late, turn in late, run wide. Try again. The gearbox in Race Mode slams between gears in 50 milliseconds, causing a shockwave that kicks me forward and then back into the seat. Mid-corner a jolt like that could upset the car, maybe cause a spin. Changing to Manual Mode, using the paddles
to shift gears smooths things out, but it’s another thing I’ve got to manage. Acceleration is merciless. Zero to 200 km/h takes less than 10 seconds.

I brake early this time, but too hard and the engine starts to act like a pendulum, causing the rear to sway eerily from side to side. I’m happy I made it around that corner alive.

But it’s not just the speed that defines the Aventador experience. It takes a lot of skill and bravery to drive the Aventador fast, just like it did with Miura and the Countach. It strikes me just how easy other fast cars have become to drive. Too easy. Electronic aids have taken the edge off supercars, but not this one. 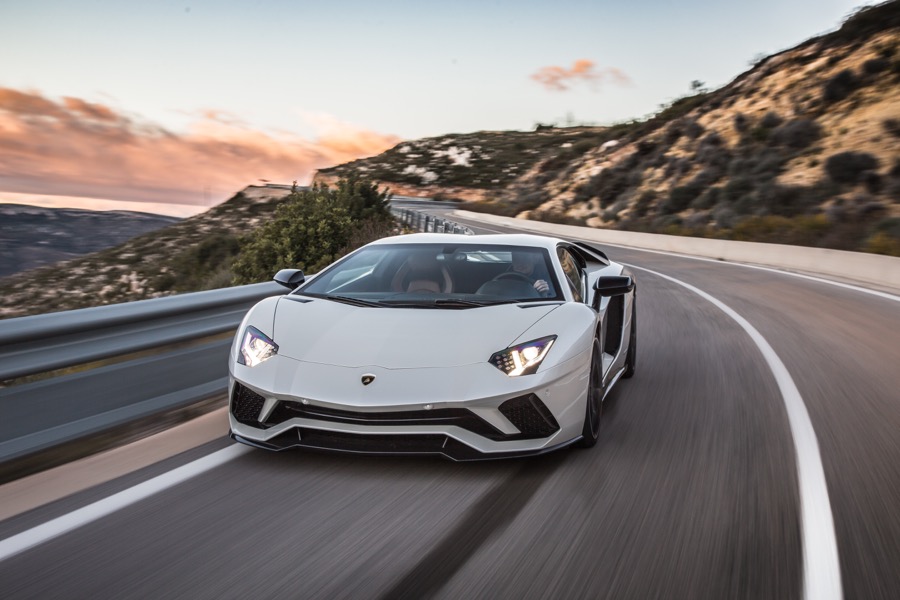 I try again, braking hard and late, smooth to avoid the pendulum thing again. Trailing the brake into the turn gets the front wheels dug in. Hit the apex, wait a heartbeat, and then full throttle and the car fires out of the corner with tires squealing. It’s exhilarating — adrenalin-pumping — to be caught up in so much metal going so fast, on the ragged edge between in- and out-of-control.

Lamborghini has come a long way since 1966: power, technical sophistication, materials are in another league. But what’s amazing — what makes Lamborghini special and the Aventador so unique — is that’s it’s still an edgy, angry and, conse- quently very scary, car. Just like the Miura. It’s a new machine with an old soul.

The Aventador S is the last supercar true to Miura’s formula. It’s the last one you can buy with a mid-mounted V12 engine. McLaren’s cars are all turbocharged, ultra-light and agile like hummingbirds. Ferrari has a mid-engine V12, but it’s a hybrid, which is hardly old-school; and besides, it’s sold out. While exceptional in other ways, those companies don’t offer cars that strike fear into drivers’ hearts. Their cars focus on everyday drivability, user-friendliness because — for some reason — people value that. Maybe we’ve gotten too soft. Have we really become so practical that even our coolest toys have to be idiot-proof? Soon it’s going to be virtual-reality supercars. Crash as much as you want! No consequences.

But the Aventador S is like a stiff drink. Once you get over the initial burn, you want more. Thank god somebody
is still making scary supercars. In the end, as in the beginning, there is only Lamborghini. And still, it is good.