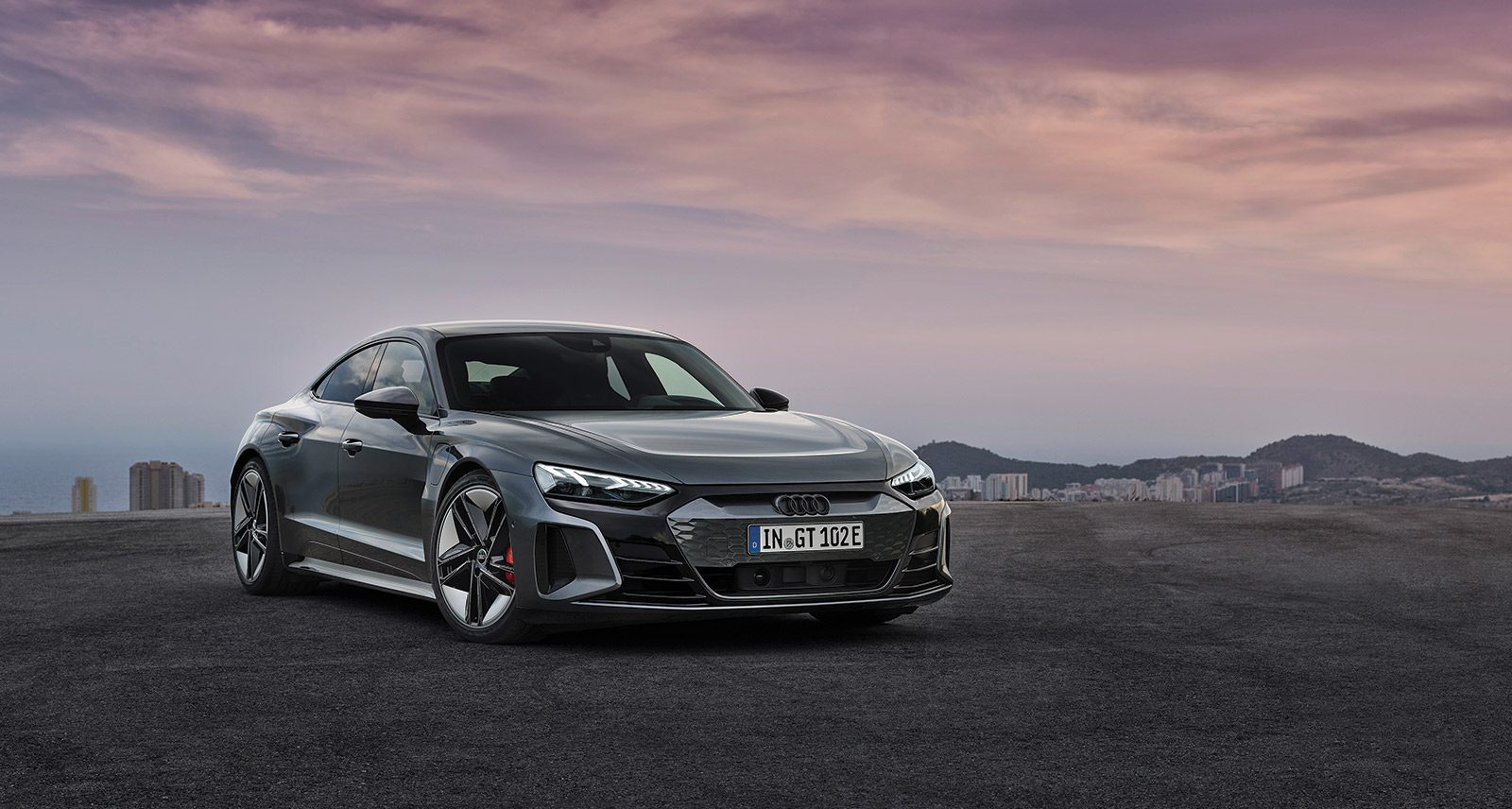 It’s not often that a hotly-anticipated product delivers on the hype, but Audi’s new all-electric flagship is doing exactly that. In a bombastic worldwide virtual event, the Audi e-tron GT quattro and the high-performance RS e-tron GT were finally unveiled today. The best news? We have it on good authority that both versions of this electric four-door coupe will land in Canada in June or July of this year. Audi’s top design Marc Lichte told us it’s the most beautiful car he’s ever drawn, and we have to agree. It’s jaw-dropping, looking even lower and more sharp in person than in photos. The headline stats are equally impressive. (Forgive us while we geek out real quick.) This is the first time Audi Sport has made an electric RS car and it does not disappoint: 590 horsepower and 612 lb-ft of torque is generated by two electric motors that provide next-gen quattro all-wheel drive. In overboost mode, the car makes 637 hp and sprints from 0-100 km/h in 3.3 seconds, which is as quick as the fastest version of Audi’s R8 supercar – and the e-tron GT has four doors and a real trunk.

Audi estimates a driving range of 488 km (WLTP) which is more than enough for most people, but the real ace up its sleeve is fast charging. It can recharge up to 100 km in just five minutes.

Driving long-distances you’ll need to recharge any EV eventually, and fast charging means you can get back on the road sooner. Enjoying the journey is what this car is all about. It doesn’t burn a drop of fuel and, according to Audi, even the plant in Germany where the car is built – it’s the same production line as the R8 – is carbon neutral. With the e-tron GT, Audi has reinterpreted the gran turismo for a sustainable future, said Markus Duesmann, chairman of the board of Audi.

“Gran turismo is an Italian term for long-distance sports cars, and I think you will have in mind all the beauties of the ‘50s, ‘60s and ‘70s,” explained Philipp Roemers, exterior designer at Audi. “All those cars visualized elegance, sportiness and prestige in a fantastic way. They also had fantastic proportions: big wheels, slim cabin, nice balance between all the overhangs – everything you need to make a car very attractive. And this is what the e-tron GT is all about: fantastic proportions.” Remarkably, the e-tron GT looks almost identical to the concept car unveiled by Audi in Los Angeles back in 2018. The company’s top designer Marc Lichte let us in on a little secret: that concept car was essentially the production car. It looked so good, they didn’t need to create some fanciful concept with altered proportions. Lichte said all they changed from concept to production were the door handles (the concept didn’t have any) and some of the badges. That’s why the e-tron GT looks even cooler than we’d hoped.

It was co-developed alongside the Porsche Taycan, so both cars share much of the underlying technology, but the Audi is longer and taller. The extra height should make it significantly more comfortable for rear-seat passengers.

The grand touring intent of the e-tron GT is evident in all the cutting-edge tech Audi has somehow managed to fit into this svelte machine. It’s available with all-wheel steering, three-chamber air suspension, a locking rear differential, a standard heat pump for extra range and faster charging, plus all the advanced driver-assist systems (ADAS) you could want.

Even the brake discs have a special coating so they don’t get so much dust and dirt all over those sculptural 19, 20, or 21-inch wheels. The nicest part of the car might just be the cabin though. Audi has taken a clean-slate approach.

“The term luxury has changed with the age of electric mobility; we are convinced of that,” said Carla Schink, colour and trim designer at Audi. “For this reason we have developed two completely leather-free interior packages for the first time. […] We combine plastic bottles with woven pieces and sustainably produced textiles.” The resulting gray wool-like fabric on the seats, matched with a wide swath of wood across the width of the dashboard, is a refreshing take on luxury.

In fact, the whole car is refreshing. It’s a big step forward for Audi, and a statement of intent about moving toward a sustainable, electric future. And, well, if this is what that looks like, bring it on.