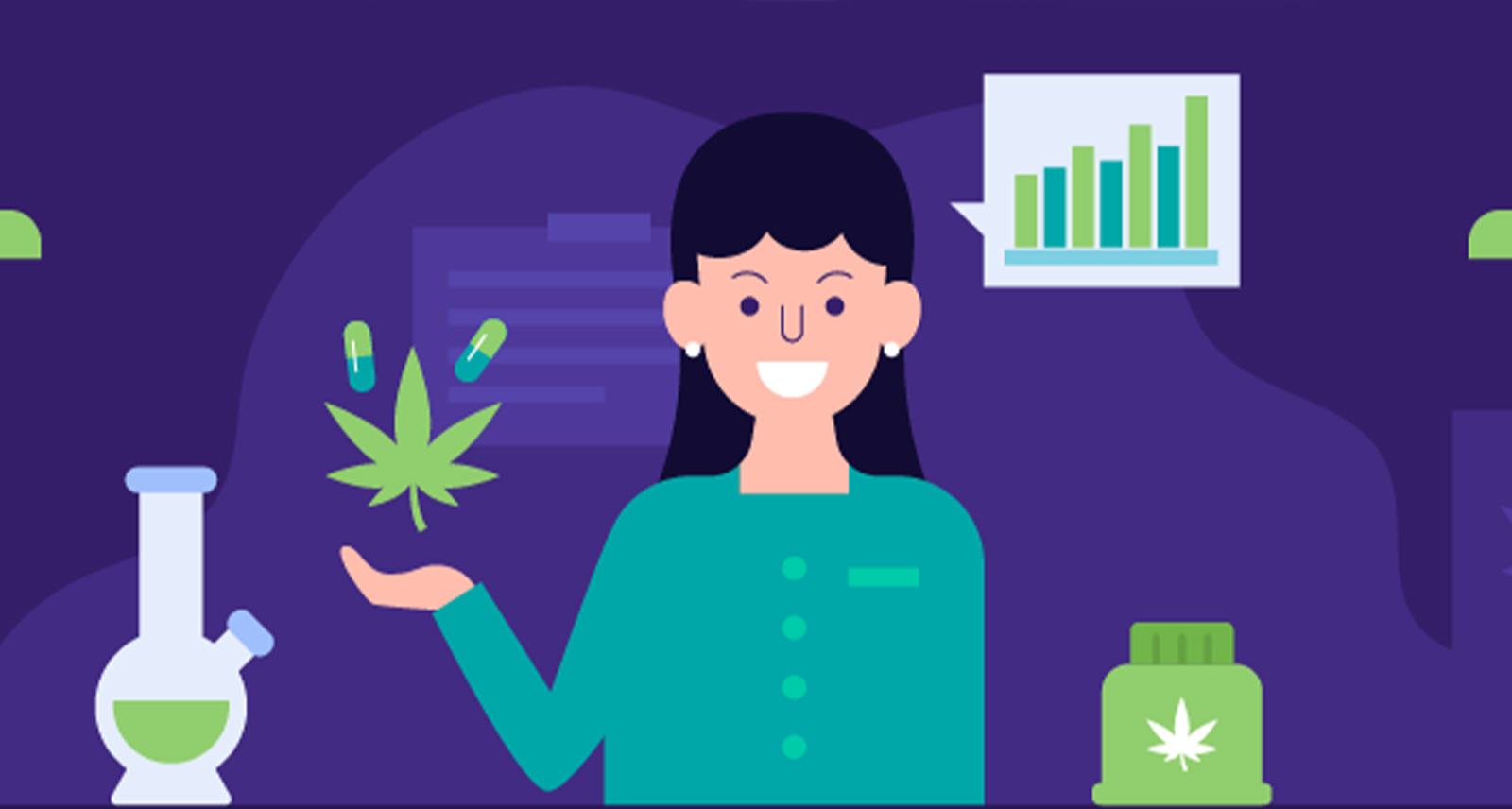 Marijuana is no longer reserved for hush-hush talks, but informed, open discussions – no matter if you are a marijuana supporter or not.

On the one hand, federal law does not make a difference between marijuana and LSD, and marijuana possession arrests are still very frequent (especially for a certain part of the population). On the other, marijuana statisticssupporting its health benefits helped turn it into a prescribed medicine besides being a relaxation aid.

The majority of Americans are in favor of it being fully legalized, at least for medical purposes. Also, even if you are not too fond of cannabis, you are bound to be impressed by the industry’s financial stats and job opportunities.

In order for you to gain a better insight, we’ve collected a plethora of riveting stats and facts you have to know about marijuana. We’ve presented them all in the following infographic and elaborated on some of them in the article below.

Key Marijuana Facts and Statistics to Know in 2019

1. The United Nations report there are 158.8 million marijuana users around the world.

These marijuana usage statistics roughly translates to over 3.8% of the world’s population.

2. In 2017, one in seven adult US citizens was reported to use marijuana.

Overall, smoking marijuana continued to be the most popular way to enjoy its effects while vaping and edibles were the preferred way of consumption in marijuana-legal states.

3. In 2018, marijuana was the most used illicit drug in the country.

Not only is marijuana used in all 50 states, but it is illegally cultivated in all of them, too. Due to the large consumption and interest, a large amount of marijuana is (illegally) imported. Mexico is the biggest marijuana supplier for the States.

4. 24% of young adult Americans use marijuana.

24% of Americans between the age of 18 and 29 are said to use marijuana, making this the age group with the largest percentage of marijuana users.

5. US seniors are the fastest-growing group of marijuana consumers according to marijuana statistics.

Apparently, marijuana consumption is one area immune to ageism. Americans over 50 years old are more and more turning to alternatives to their prescribed medicines. Legalization and appeal of marijuana products, such as vape pens, have inspired a more relaxed attitude among seniors towards marijuana use.

6. There are more marijuana smokers than tobacco smokers.

About 37 million Americans use marijuana in some form every month. This is a higher figure than the number of active tobacco smokers.

In states where marijuana has been made legal, alcohol sales have shown a significant drop of 15%.

Marijuana legalization statistics tell us that in the year 2014, one-third of Colorado pot users were responsible for 87% of marijuana demand.

There is also some evidence in marijuana statistics that women have become more keen on marijuana usage, but it is unclear if there has really been an increase, or whether women feel more at ease today admitting marijuana usage.

10. Marijuana has a different effect on users regarding their gender.

Men tend to get more “high”, whereas women are more prone to memory impairment. Also, women tend to feel an increased appetite more than men. However, men are generally more interested in trying illicit substances than women, and therefore more prone to visiting emergency rooms.

11. In 1996, California became the first state to legalize medical marijuana.

From then on, more states have followed suit, and the passing of the Farm Bill is a positive sign even more states will join. One species of cannabis has been made legal (industrial hemp), but we are still waiting for marijuana to be approved on the federal level.

12. Medical marijuana helped over 90% of the people who were using it.

According to a survey done in California, 92% of medical marijuana patients confirmed marijuana helped them with their condition.

13. At the moment, medical marijuana is legalized in 33 states.

We are still waiting for more statistics on marijuana and scientific research to prove medical marijuana advantages. However, scientific studies require special approval.

14. The US government is trying to stop medical marijuana legalization.

The States still have a long way to go. It was only in 2014 that the Rohrabacher-Blumenauer Amendment prohibited the US Department of Justice to use federal funds for discouraging states from implementing medical marijuana laws on their own.

Health benefits are becoming more prominent, and even 61% of Americans is for legalizing marijuana completely. Certain types of CBD oil have particularly been praised

16. On average, a medical marijuana user spends $136 on one purchase, which is made every 10 days.

This is much more than a recreational user’s spending ($49). They also tend to use it less frequently (every 14 days, on average).

17. In 2018, California entered marijuana statistics as the state with the highest number of medical marijuana patients.

915,845 Californian patients had their medical cards and were allowed to use marijuana for treating their state.

18. Severe pain is the most frequent reason for taking medical marijuana.

According to Colorado marijuana statistics, the top reported condition for which patients requested medical marijuana treatment was extreme pain.

The war on drugs was only a tool to deal with antiwar protests and make hippies associated with marijuana use in order to arrest them more easily. On the other hand, African American arrests were made more feasible by associating them with heroin usage.

20. In the US, marijuana is regarded as dangerous as heroin or LSD.

Marijuana is enlisted as the Schedule 1 drug. The US Drug Enforcement Administration (DEA) still holds the opinion that marijuana (especially the indica species) has no currently accepted medical use and is prone to substance abuse.

21. Marijuana is the second most frequently found substance in drivers’ bodies after serious traffic accidents.

22. One marijuana bust happens every 48 seconds.

Despite the legalization efforts, the number of arrests is only getting higher. Out of all the drug arrests in the USA in 2017, marijuana incarceration statistics show marijuana made up for almost half of it.

23. You are more likely to get arrested for marijuana possession if you are an African American.

The harsh racial disparity is even more shocking if you know the fact there is no data confirming African Americans are larger consumers of marijuana than any other minority or majority.

24. Based on marijuana arrest statistics, you are more likely to get arrested for possession if you live in Texas.

According to data for 2016, the state of Texas is the rising star in marijuana prison statistics. Even more shockingly, out of all the marijuana arrests the police made that year, 98% of them were for possession only. It seems a minor case, but the consequences are serious, including a lifetime criminal record.

Despite the fact that the US is making progress when it comes to marijuana legalization, there still hasn’t been a significant decrease in marijuana crime statistics.

Based on a report by the American Civil Liberties Union, this is how much it cost the US citizens in 2010. The figure for today is expected to be even higher.

27. Marijuana is only mildly addictive.

29. Marijuana is not a gateway drug.

Marijuana gateway drug statistics tell us that even though people using marijuana may turn to drug abuse, there is no uniform tendency. Otherwise, it could be said for alcohol to be a gateway substance, too.

30. Chronic marijuana usage can cause a decrease of 8 IQ points.

People who started smoking marijuana as teenagers and continued to do so when they became adults lost an average of 8 IQ points between the ages of 13 and 38. Whereas marijuana effects on adults can be very beneficial, the effect on young teenagers is always detrimental.

31. Smoking marijuana can increase the heart rate for up to 3 hours afterward.

Among other marijuana side effects are impaired memory and movement, altered senses, moodiness, difficulty in problem-solving and thinking.

32. Marijuana is not safe for pregnant women.

Despite the fact that marijuana is very helpful for reducing nausea, smoking marijuana during pregnancy statisticsconfirm marijuana is not recommendable during pregnancy. It can reduce the oxygen flow to the baby, make the placenta more penetrable and allow for a part of the THC content to harm the baby.

33. There are no marijuana death statistics to report since no one has ever died of a marijuana overdose.

Among a plethora of substance abuse deaths, marijuana stats still have not recorded one case in the US in which a person died due to marijuana overdose.

34. It is practically impossible to die from a marijuana overdose.

According to the United States Department of Justice Drug Enforcement Administration marijuana deaths statistics, one would have to take 40,000 times more marijuana in order to die from it. This equals consuming 1,500 pounds of marijuana within 15 minutes or smoking between 20,000 and 40,000 above average size joints in 20 minutes.

If you wish to enjoy a decent joint, this is how much you should have with you.

36. The most expensive marijuana is sold in the District of Columbia.

37. According to marijuana statistics from 2017, sales of medical marijuana were larger than sales of Oreo cookies.

In 2017, medical and recreational marijuana sales were almost 9 times bigger than the sales of renowned cookie brand. By now, they may have even surpassed McDonald’s.

38. Americans spend around $40 billion on marijuana every year.

And will most probably continue to spend even more on legal and illegal marijuana. Due to making marijuana more accessible and it becoming a health and wellness trend, we can expect statistics about marijuana to show us a much higher figure in the not so distant future.

If you are unsure which business to invest in this year to achieve great revenues, marijuana business may just be the one for you.

Marijuana is a real billionaire industry. The sales were a “mere” $9 billion in 2017, but it still equaled the annual revenue of the renowned diapers brand Pampers, or the total snack bar industry.

Most notably, marijuana statistics will continue to amaze and shock us going forward as this industry rapidly grows. Be it marijuana usage, benefits, revenues, or marijuana crimes statistics, the US will continue to be an active participant in studies and analysis. First of all, due to its large population. Secondly, the government has finally shown some greater initiative for legalizing marijuana. Nevertheless, be it recreational or not, marijuana usage is not to be taken lightly. The attitude towards marijuana is changing on the federal level as you are reading this so we can expect some more exciting statistics to arrive at our pages soon enough.

Is Your Dirty Home the Reason You’re Single?

I Hope I'm Old Before I Die

Why Your Neighbourhood Running Track Is the Ultimate Summer Gym

How to Keep Your Health in Check This Summer

How Often Should I Actually Go for a Physical?