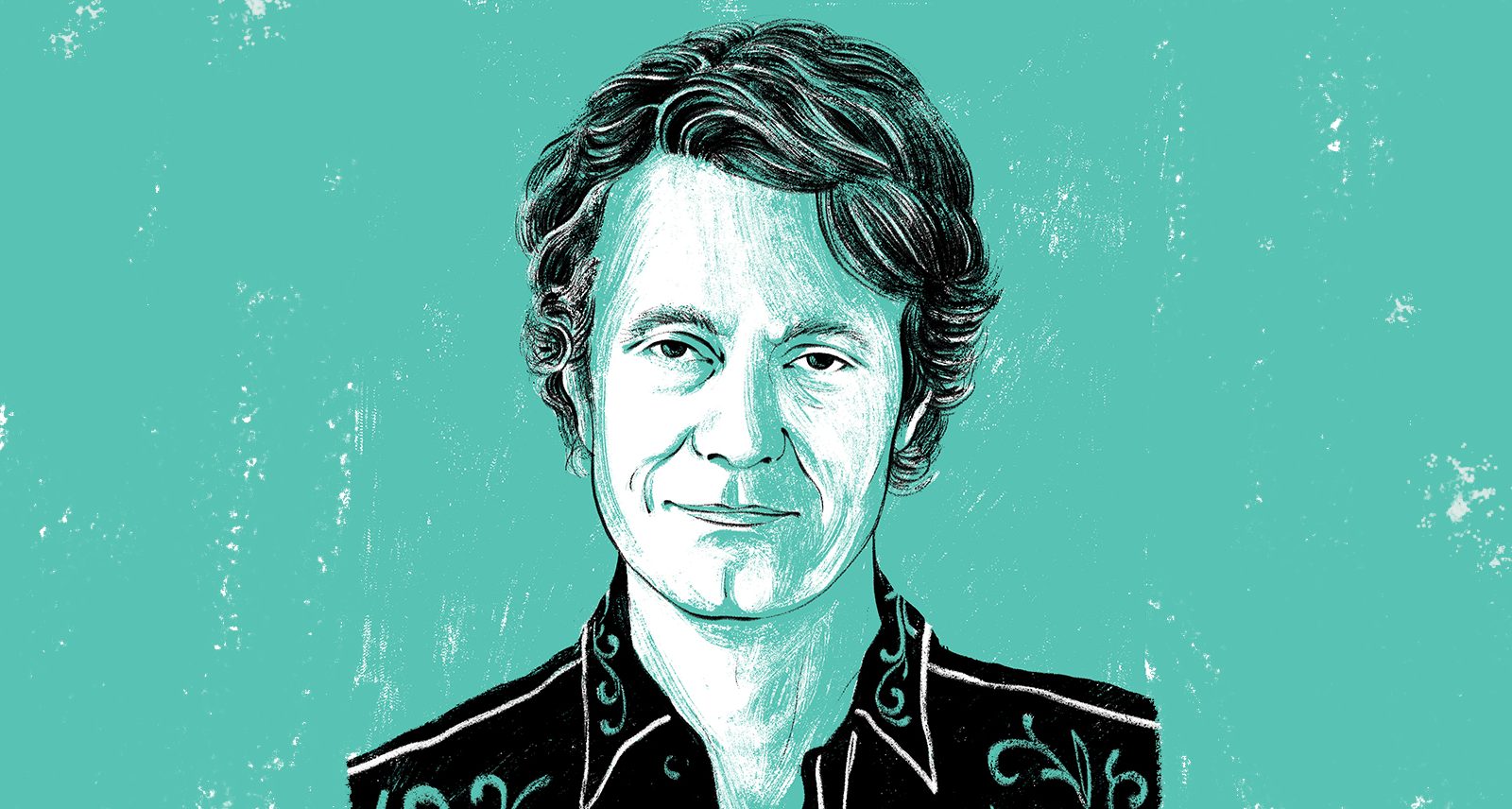 Jim Cuddy has a bone to pick with his Green P app. The morning we meet, he gripes that he accidentally paid for an entire of day of parking instead of an hour. “Technology! What a pain in the ass,” he jests. Yet despite his best efforts to sound like an out-of-touch old man, Cuddy is far from it. For over 30 years, he’s fronted Blue Rodeo, one of Canada’s most consistently successful bands, putting out albums that routinely go gold and platinum. Save for the Tragically Hip, there is perhaps no other act more firmly woven into the nation’s cultural fabric - and it’s far from Cuddy’s last rodeo.

In fact, at 63, the singer-songwriter is such a ball of energy he can barely sit still between his band’s albums. Hence, Countrywide Soul, his second solo LP in as many years. A collection of new tunes and reworked classics, the record is a testament to the Cuddy’s unrelenting creativity, and peerless ability to pen a love song. Turns out he’s a pretty active thinker, too, with big opinions on current issues, from social media addiction to modern CanCon to political scandals. Speak with him long enough and you’ll understand why he’s earned his spot in Canada’s cultural firmament - no parking pass necessary.

Are you on your phone a lot?

Not really. I mean, I’m not on social media, but my phone is my tentacle to my work, my kids, and friends, so there’s a certain amount of time I’m on it. But it’s a big topic now. I was just listening to Shawn Mendes talk about anxiety and phones. Anxiety is an epidemic, which is surprising to me, and somehow phones seem to be manifesting it. Maybe it’s due to being constantly hooked up to social media, which appears to always judge you. I avoid it because it’s just too personal. My work is personal enough. And I’m frustrated enough just fucking up the parking app. [Laughs.]

The title track on your new album, All in Time, reminds me of the millennial phenomenon of ghosting. You sound like you’re waiting for someone to respond to your romantic gestures, but she never does. How sad!

But it’s not sad, because that’s absolutely about my wife. She was a hard emotional and psychological nut to crack. When that song was first done, it was a rock song and had anxiety in it - now it’s much happier because it all worked out. But there were painful, slow steps. She wanted to go at a pace that drove me crazy. It was the exact same thing back then, by the way - if you didn’t want to see somebody anymore, you just stopped phoning them.

People often praise your marriage [to actress Rena Polley] as being an anomaly in the entertainment industry. How have you lasted more than 30 years together?

It’s the unanswerable question, just like, “Why do bands stay together so long?” It’s because they have the will to. You’re always going up against challenges to staying together. The option of leaving is always there, but you want to stay. My wife and I both started as artists, so we were sympathetic to each other’s needs to pursue our artistic stuff. And the rest is a bit of a mystery. I think somehow or other, people end up in the situation that makes them comfortable, whether it’s somebody new every six years or six months, or whether it’s the same person for a long period of time. And I’m very much the latter. Things in my life, I try to make them constant: my bands, my relationships, my wife. It’s just the way I’m wired. For most musicians, it’s about trying to get through a particular period in your life and career where the demands on you are overwhelming, and you inevitably neglect the people closest to you. More often than not, people don’t get through that period. It’s very difficult. For us, that period also came with two children. And we came as close to breaking up as you can come. I thought we were breaking up, and then we weren’t. And now we’re happy. Isn’t that just the luck of the draw?

“Canadians can love Bruce Springsteen, but he’s talking about Jersey, American culture, and things that ultimately are not us.”

Blue Rodeo, much like the Tragically Hip, arrived at a moment when Canadian music - especially songs that specifically referenced people and places in the country - really began to flourish. Why do you think you guys blew up nationwide when you did?

When our first record came out in 1987, we were very, very different than what was on the radio. Back then, it was all Van Halen and big hair bands. I think people were fatigued by that, and they were really tired of being fed music from America and England. Canadians can love Bruce Springsteen, but he’s talking about Jersey, American culture, and things that ultimately are not us. So, there was a great sense of discovery of Canadian culture by Canadians, and it all came to fruition by the end of the ’80s. MuchMusic was a big help because it was really in the streets, promoting the music and playing the videos. I think there was something authentic and relatable about it to Canadian people, even if it was weird - even if it was k.d. lang–level weird. People thought, “Well, she’s from Alberta and I know people from Alberta!” Or with Gord Downie, they’d say, “I know a guy just like that guy!” All of a sudden, they were seeing bands they liked that came from places they knew.

Did you ever wish you could break out in the States?

I know this seems disingenuous, but it never occurred to me. I liked the adventure of the States, but I didn’t particularly like where we went. Sure, I liked playing L.A., New York, or Chicago, but I didn’t like playing Louisville or places like that. You were playing horrible places. It didn’t feel the same as Canada; people didn’t get it in the same way. In the U.S., inevitably people would say, “What kind of music are you - country or rock?” Or, “You’ve got two singers - who’s the main singer?” Nobody ever asked that in Canada! No one had a problem with two main singers. I think we’re just used to that; we live in a bilingual country. It doesn’t occur to us that things should only be one thing. But it does matter in the States. We played roots music, but because we had a certain distance from the original - the Johnny Cashes and whatnot - we didn’t feel the same adherence to making it the exact same way. What we came to realize is the U.S. is a different culture. We are not an adjunct of America - we’re a separate, historically distinct culture.

Well, nowadays we’ve got Canadians like Drake and Justin Bieber, who are huge cultural exports - to the point that Americans are emulating them. How does it feel seeing that?

Now it’s a much more level playing field. It used to be very difficult to launch a music career out of Canada, whereas now it’s entirely possible. But other than their personalities and who they are, I’m not sure you would say that their music is distinctly Canadian. I think it’s international. They’re adding to the canon of pop music. But we came out at a time when there needed to be some rebalancing, and maybe we were fortunate there was a lack of identification of Canadian culture back then. I mean, I think a band like Arcade Fire is uniquely Canadian. They have a Canadian formula: there’s diversity and jamming and a blending of different cultures - there’s some Haitian and American in there, and Montreal has a huge stamp on the music. Do you think Drake is distinct from other rappers because of his Canadian background?

I mean, he does reference Toronto a lot in his songs.

It seems like it’s risen above country boundaries. Rappers are all listening to and pulling things from each other, but it doesn’t seem to me to be particularly Canadian. When you look at the Junos nowadays, you see an industry that doesn’t just look at Canada anymore - it looks at the whole world. The beauty in that is the world is there for Canadians to play to - all the opportunities are there. The problem is that things with a slightly separate and more unique character are pushed to the side. There was a time when those things were front and centre.

We were talking about anxiety earlier. When you drop a record, do you still get nervous awaiting the public’s reaction?

I really used to. At the beginning, it mattered so much because we were actually constructing our career. I remember when Bobby Wiseman left the band, the reviews were absolutely a kick in the nuts. Full on. One said, “Blue Rodeo’s future lies in its past.” As in, whatever they’ve done is all they will ever do. And that was in 1990! But then you realize how temporary those things are. Mind you, our reviews used to be in a newspaper, which was gone the next day. It’s much different with social media posts that stay up and get reacted to and don’t go away. Still, we got some really personal critiques. One guy was like, “Jim Cuddy doesn’t seem to be into it as much.” Like, how do you know what I’m thinking! You learn to cope, though. I think I’ve gotten over it.