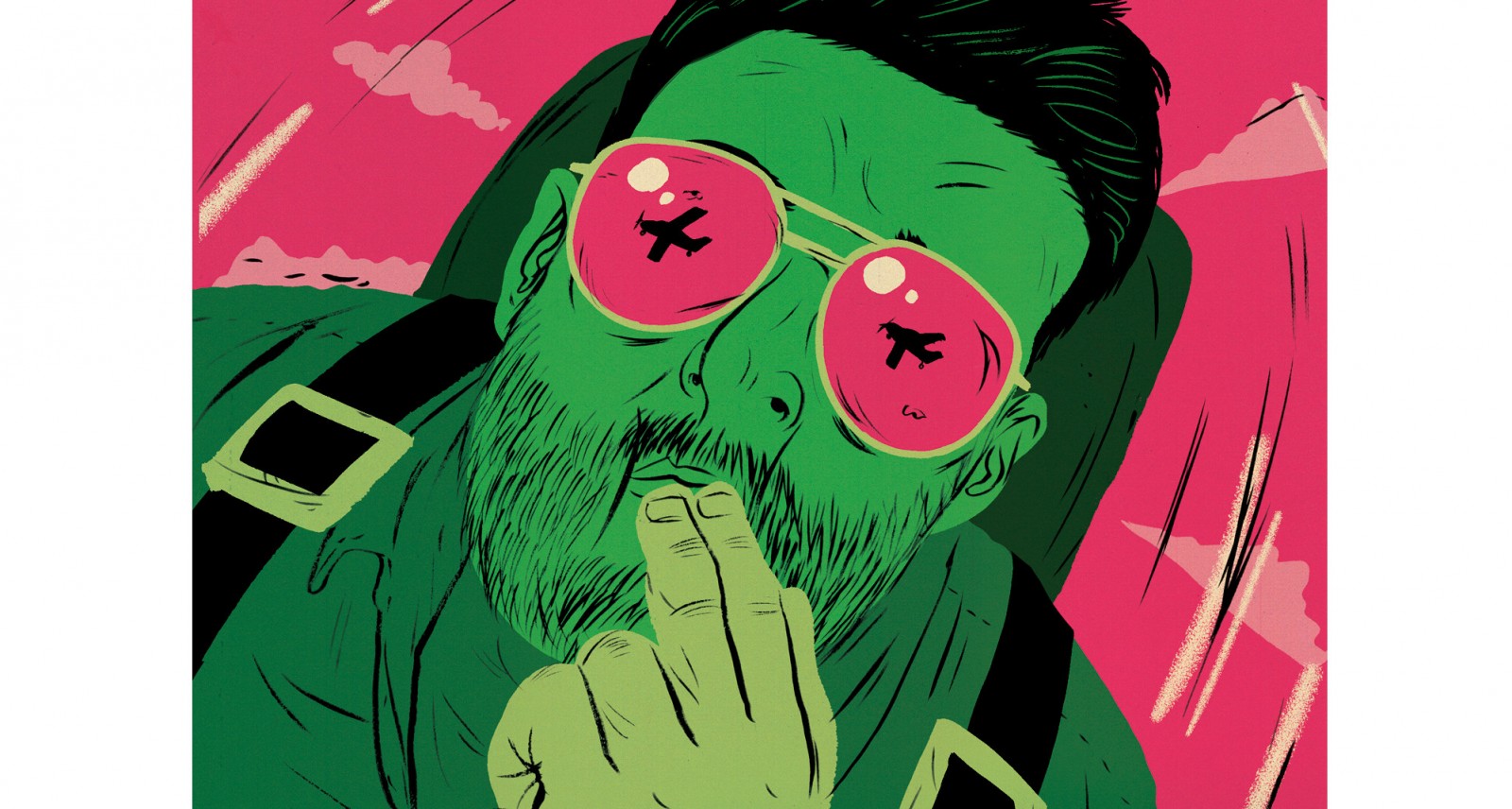 I’m stuck in the Nevada desert—semi-hung-over in an airplane hangar that’s like all the scenes in Top Gun rolled into one: banners, bi-planes and a bar, shuffleboard and a jukebox that plays Kenny Loggins and the Everly Brothers (no Europe, thank God). And I’m pissed off at everyone. Well not everyone, but a lot of the guys I usually like: My three-year-old son, my dad, Tom Cruise, Kingsley Amis, and of course, my stupid self.

I’ll go through them in order.

Firstly, I wouldn’t even be here if it wasn’t for my little boy and his core beliefs. One of them is that fighter pilots are really cool—strongly bolstered by his current obsession with Star Wars and the character of Zev Senesca in particular. In case you don’t know, Zev Senesca is a pilot with the rebel alliance who once saved Luke Skywalker. He’s the only X-wing fighter who carries a blaster. And oh yeah, he’s got the same name as my son. Zev is going to be Zev Senesca for Halloween.

Zev’s other core belief is that his dad can do just about anything. This is not really bolstered by anything, and is, of course, the reason I write this column about learning how to do cool things before my boy is old enough to realize I don’t really know how to do anything. Today, for example, I will learn to fly a fighter plane. Granted, I won’t be taking off or landing, but I will be piloting the thing in a mock-dogfight. And I will send him a video of me doing it. Sometimes that’s what fatherhood is about: putting aside, for a moment, the more important job of imparting knowledge to your child, and instead doing the far more difficult thing—impressing him.

Of course if it weren’t for my dad I wouldn’t be here either—I wouldn’t be anywhere. But along with the gift of life, he also gave me a weak stomach. Our bellies can take surf, turf and wine for breakfast, lunch and dinner, then a bottle of whisky for dessert. We can go to bed feeling just fine. But should we go on a road trip (which we’ve done a few times), neither of us can navigate. To look down at a map while the other is driving means instant bilious nausea. So we get lost, sick, or just stay in a bar.

Boats and planes are even worse. If they’re small and we can’t see the horizon, we get very ill, very fast. The Stall stomach was made for whisky shots, not barrel rolls.

Which brings us, naturally, to Tom Cruise.

For a moment in the mid-’80s, all of us stargazing action-heroes lowered our lightsabres and bullwhips and—thanks to Pete “Maverick” Mitchell and his ride into the danger zone, dreamed of being fighter pilots instead. And now Sky Combat Ace has taken our childhood impossibilities and made them a somewhat attainable semi-reality. For a thousand dollars or so, you can quickly learn to pilot a plane, fly it through the air at 250 miles an hour, do some aerial acrobatics and try to shoot down your buddy, boss or fellow journalist 6,000 feet above a dry Nevada lakebed.

In the briefing room, Pilot Richard “Tex” Coe is describing what we’re about to do. He is talking hammer drops and evasive maneuvers and how best to get behind your opponent. And then I think about Kingsley Amis, and how I will never write as well as him; I think about this a lot, at least since I started writing a book about hangovers. It is one reason I’m in Vegas, the hangover capital of the world. Of course Vegas is also the capital of attempting things you have no business doing.

What we’re being briefed about is incredible—something I should barely be able to fathom. But the high winds have kept us down and talking to the pilots. And, even as a fan of fun macho bullshit, I’m starting to find this all a bit tedious. The three other journalists and I are supposed to give each other tag names, but can’t invent them. We have to choose from five leftovers, stuck to a felt board by the door. Only one fits: “Toxic.” They assign it to me gleefully.

Yesterday, I got sick to my stomach after driving a racecar. That was mostly due to my hangover—which was mostly due to my book, which brings me back to Kingsley Amis, who wrote about hangovers as wittily and viscerally as anyone in history. He even tossed in some careless advice: “Go up for half an hour in an open aeroplane (needless to say, with a non-hung over person at the controls).” Yes, this was one of Kingsley’s untested suggestions for curing a hangover. It makes my top gunning today feel somehow both honourable and dubious at the same time.

Sky Combat Ace, as it happens, offers a 45-minute flight over the Hoover Dam in a classic open-cockpit bi-plane with the pilot in the back doing all the piloting you want. So, this, I thought, was perfect: I may never write like Kingsley, but I could test a hangover cure that he never did while impressing my son with at least a photo of me in the cockpit. Except that “Tex” says no. The winds are too high for that today. It’s better we stick with shooting each other down while doing aerial acrobatics instead. Apparently the winds are perfect for that.

But I won’t complain about Tex. In fact, I should thank him. As the head honcho around here, it’s his Sky Combat Ace website that may just have saved me. There, under Frequently asked questions—Will I get airsick? I found this:

“The most common cause of airsickness at Sky Combat Ace is due to hangovers.  We know Las Vegas is a crazy place, buy try to hit the sack early the day prior to your Sky Combat Ace adventure!”

So last night I heeded this advice and hedged my bet by drinking only half of what I might have. And now here I am, climbing into a morning-after bi-plane with a lingering but tolerable half-hangover. The co-pilot, sitting behind me, goes by “Hollywood”. Fittingly, he has so far given me more tips on how to look good on screen then how to fly. There is a cockpit camera that will catch my every yelp and grimace for posterity. “Better to take your shades off,” says Hollywood. “Then we’ll see the whites of your eyes.” But we’re already rolling down the runway—my opponent, “Burbank” the freelancer from California, but not from Burbank, rising into blue ahead of us. And now we reach speed, and lift off.

We are airborne, Hollywood still in control.

“You ready?” he says. “Roger,” I say, before a last second decision to take off my shades, hooking them into the collar of my flight suit. “All yours,” says Hollywood.

And now I am flying. And flying is fun—curving over the sand, carving through the clear blue sky like a silver-tipped arrow… It takes me a moment to realize the sky shouldn’t be this clear, though. And I remember Tex’s words in the briefing room. “Lose sight and you lose the fight.” Where the hell is Burbank?

“Behind you!” says Hollywood. And now I’m spinning, rolling, diving and dropping. The fight is on, and though I’m trying my best, this part isn’t fun. I’m upside down. My sunglasses fall, bounce all over the cockpit. Through hammer-drops, barrel rolls and loop-the-loops, my guts—my father’s guts—are jumping up through my chest.

I close my eyes, forget about Burbank and fight against the nausea instead. I don’t mind getting shot down. What I don’t want to do is go home to my son with such ignoble footage—a vortex of vomit, curse words and broken aviator glasses. So when Hollywood asks how I’m doing, I just give a thumbs-up, like Maverick would, swallow down hard and look for the horizon.

As for impressing my boy, though, it turns out the camera wasn’t even on. He’ll just have to take my word. He’s already got my guts.

'Narcos' Is Good, but 'Barkos' Could Be Even Better

Watching Animals at the End of the World

Inside the Kimpton Saint George