British firm Foster + Partners has unveiled a masterplan for a site in Beverly Hills that will include plant-covered residences and elevated botanical gardens.

Unveiled by developers Alagem Capital Group and Cain International, One Beverly Hills is designed for a 17.5 acre (seven hectare) site that is home to the Beverly Hilton and Waldorf Astoria Beverly Hills hotels.

The masterplan proposal develops the triangular site, which is located at the intersection of Wilshire Boulevard and Santa Monica Boulevard, with an "ultra-luxury hotel" including 42 suites and 37 residences, two residential buildings with 303 units and a four-storey pavilion for shopping boutiques and eateries. 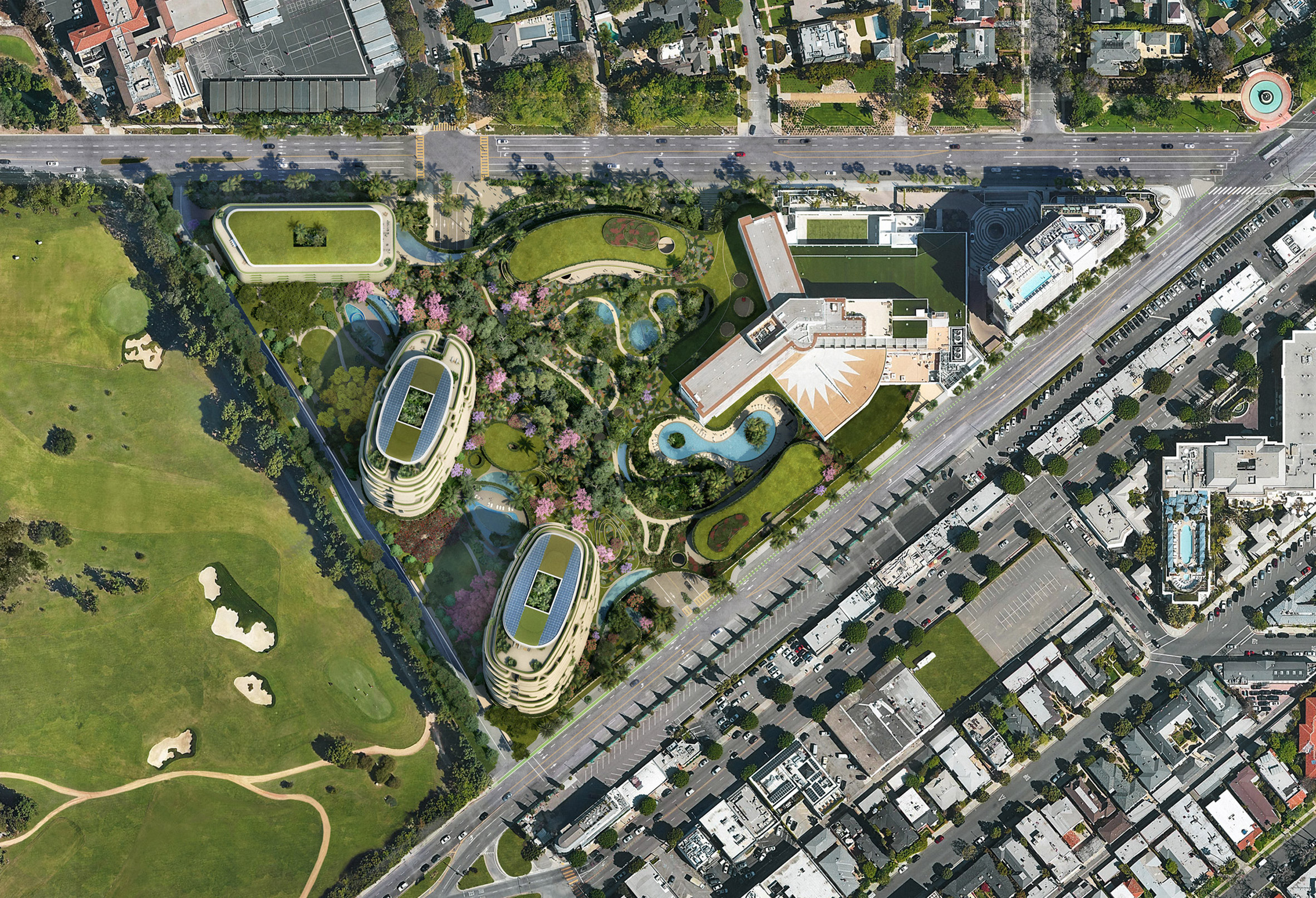 The surroundings are transformed into 8.5 acres (3.4 hectares) of garden, with over 300 species of plants and trees, that Foster + Partners' founder Norman Foster said references the history of Californian city Beverly Hills.

"In its beginnings, Beverly Hills was agricultural flat land – a green oasis that fed a growing urbanity," he said.

"A century later, we have seized on this inspiration to create an organic architecture that merges with landscape, a large part of which is publicly accessible, creating a shared resource for the city."

Renderings of the project show a pair of rounded, glazed residential buildings wrapped by curvilinear white balconies and greenery. Three lower-level buildings have a similar aesthetic. 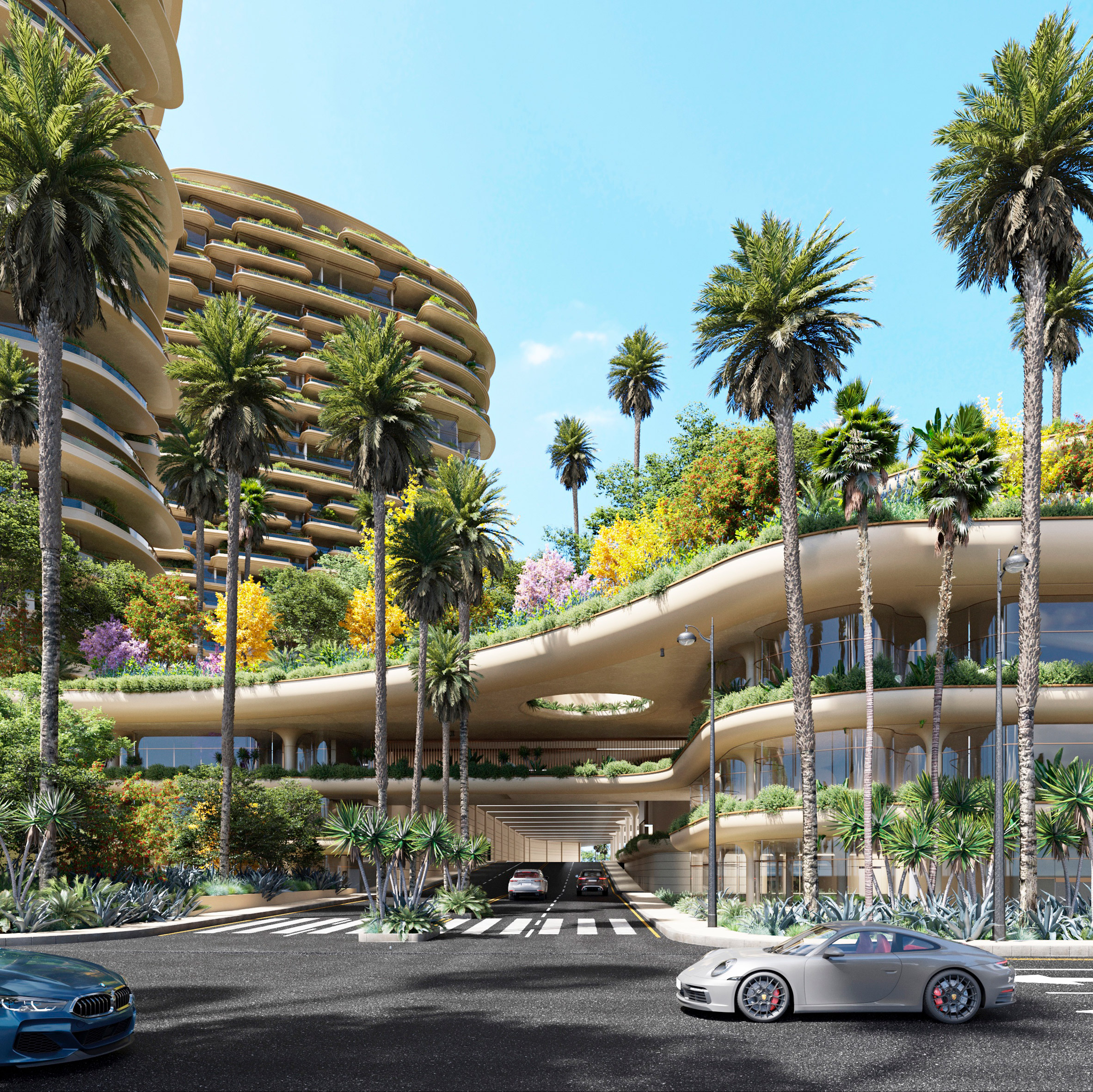 The Merv Griffin Way, a motorway that cuts through the site to link Wilshire Boulevard and Santa Monica Boulevard, remains open and is covered with a platform for the landscaped gardens above.

Landscape architecture firm RIOS has designed the green space with 4.5 acres (1.8 hectares) of public botanical and sculpture gardens and 3.5 acres (1.4 hectares) of private gardens for residents and hotel guests.

In total, it includes nine distinct botanical gardens, pools and ponds and two one-mile-long walkways separating the public and private links around the landscape.

Moisture sensors are intended to be used to indicate when the plants need more water and stop when they have sufficient amounts of water, with the aim to be more efficient of water use.

"The richness of Californian culture owes much to its diversity of influences, which comes together with the urgent need for sustainability –  particularly conservation and recycling of water for the greenery," said Foster.

He added that the concept forms part of "a green approach" across One Beverly Hills, which is designed to reach LEED Platinum and WELL certifications in recognition due to environmentally friendly design details and promotion of well-being. 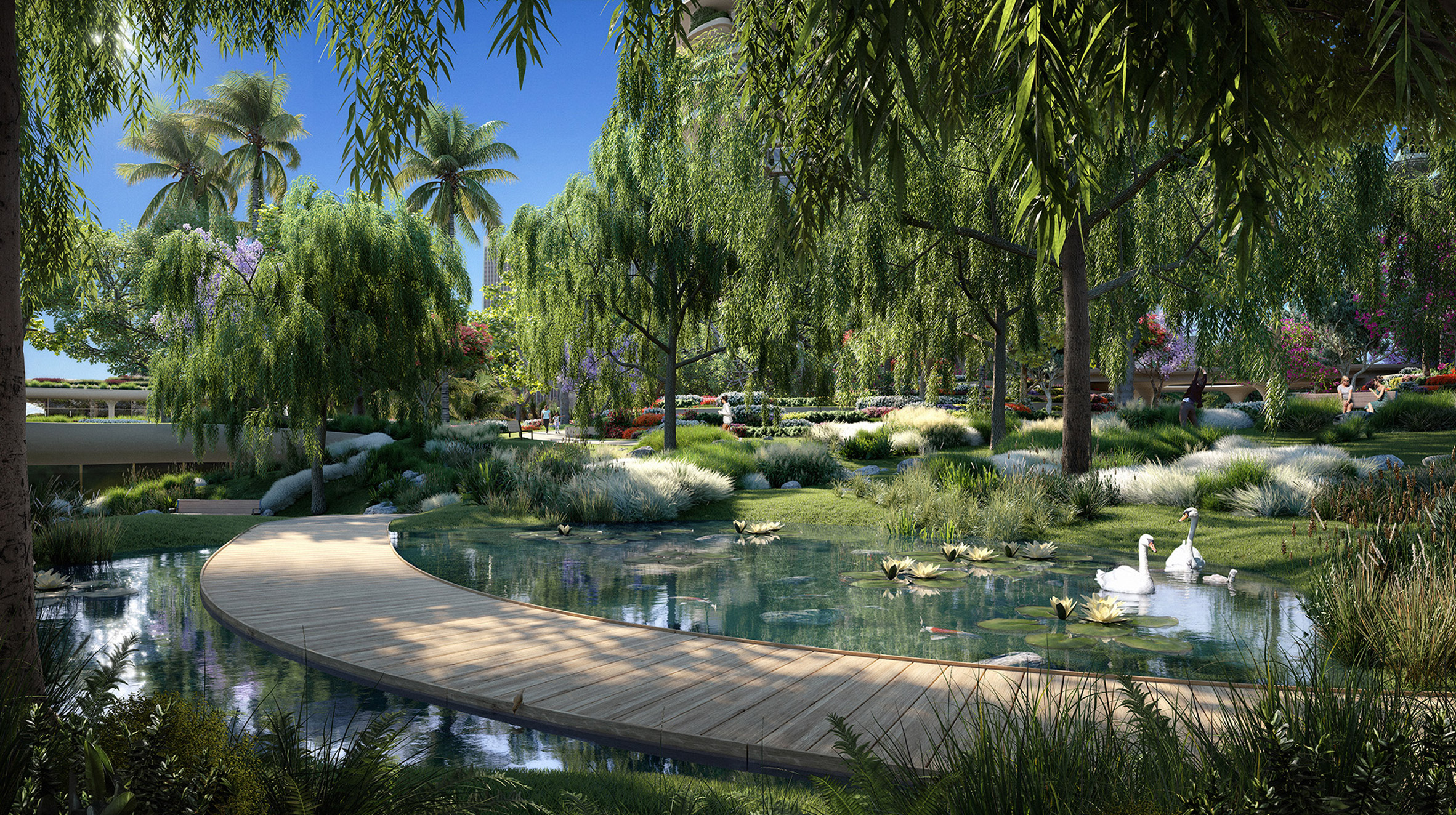 Other projects in the Californian city include the Greenhouse a residential complex, designed by Chinese firm MAD Architects to look like a village on top of a hill, which is under construction on Wilshire Boulevard.

Founded by Foster in London in 1967, Foster + Partners is also working on other projects in California. They include a proposal for a neighbourhood in Santa Clara and San Francisco's Oceanwide Centre skyscrapers, which are slated for completion next year.