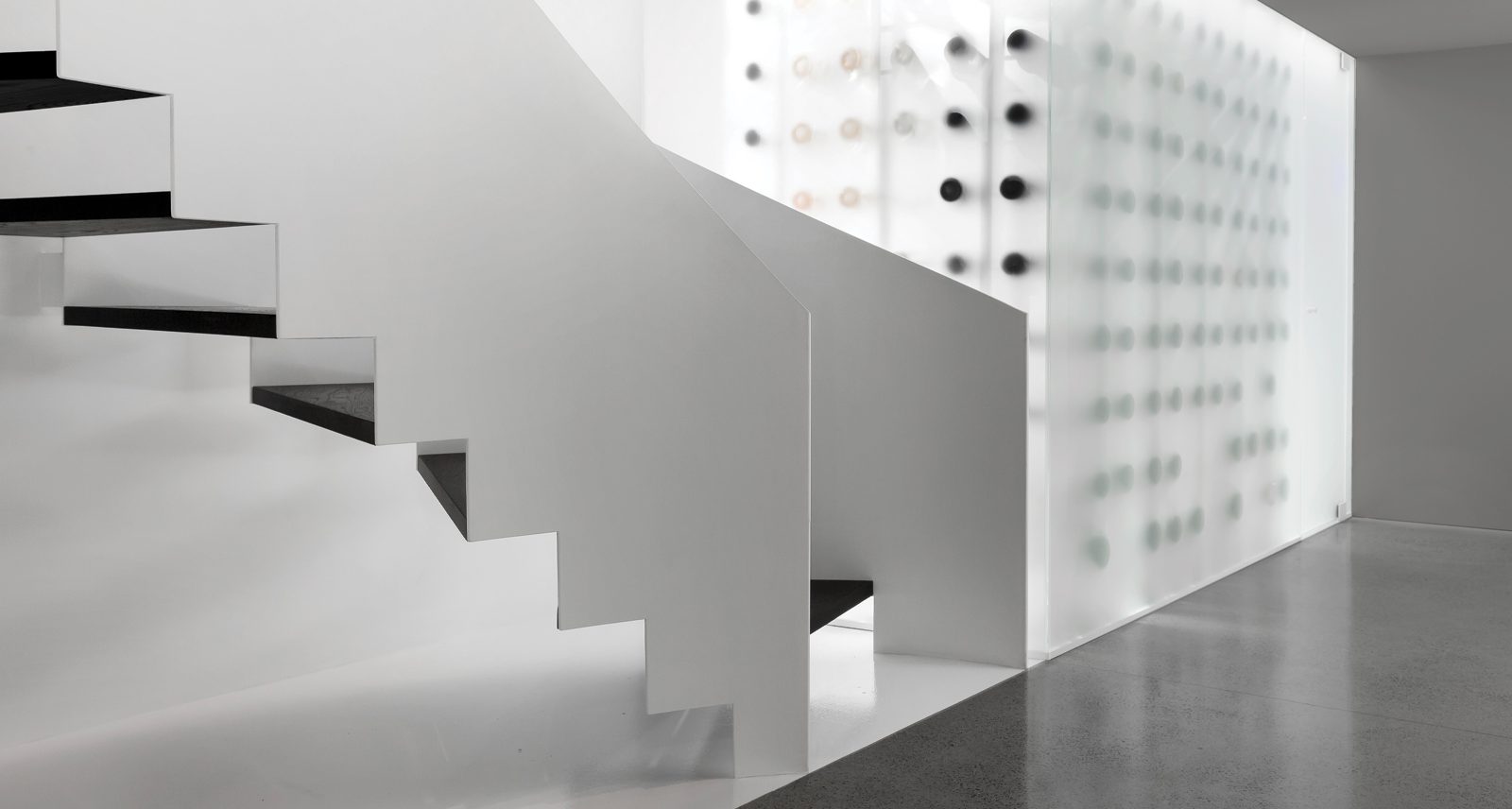 The front facade of the new Hotel Monville, in downtown Montreal, was designed to trick the eye.

Thin pre-poured concrete panels sit flat against the surface, barely in front of the windows they encase. But because the material alternates between dark and light shades of grey, there appears to be a great deal of depth. The trompe l’oeil isn’t some gratuitous gimmick. It’s a statement about the surrounding city — a love letter to Montreal’s unique place in North American design. The heft of the look alludes to the nearby architecture of the 18th and 19th centuries — immense Catholic churches with grey sculpted masonry. But its crisp lines and bold contrast are evidence of a newer style starting to take over.

In many ways, Hotel Monville is emblematic of a resurgent innovation in Montreal’s architecture. On the surface, the palette — black, white, and grey, with the occasional pop of blond oak, rich brown leather, or brass to add a touch of warmth — is bang on trend, and seen everywhere in the city: in homes, hotels, and even golf clubs. But what’s motivating the aesthetic here is more meaningful.

Monville was designed by Maxime-Alexis Frappier, founder of ACDF Architecture and a part of the city’s new vanguard of designers. In 2013, he won an award from the Royal Architectural Institute of Canada for being Canada’s top young architect; the RAIC has likewise named Montreal studios as the country’s most promising for three of the last four years, having given their highly coveted Emerging Architectural Practice prize to Chevalier Morales Architectes in 2018, La Shed in 2016 and Kanva in 2015. Other notable newcomers include Thomas Balaban, who recently won a $500,000 grant from the Canada Council for the Arts to represent Canada at the 2020 Architecture Biennale in Venice — the profession’s largest international stage — as well as studios such as NatureHumaine, Alain Carle, and Atelier Boom-Town, to name a few. All are constantly being praised on the world’s most-read design blogs, Dezeen and ArchDaily.

These ateliers have turned Montreal into their playground, remixing its storied past to imagine a daring, fun, and very bright — if also intriguingly dark — future. Yes, stark blacks and whites are evident staples, but the genius of the city’s new practitioners is that they have found a way to make this familiar palette look inviting, livable, and dynamic, as opposed to austere, clinical, and foreboding. They do so by cleverly layering in historical references and contextual cues, making their structures seem distinctly now, yet not alien to what’s come before. This example not only benefits their home city, but every designer everywhere that has struggled with one of contemporary design’s biggest conundrums: trying to be both minimal and approachable at the same time.

“Rather than being overly austere, the black seems to vivify the design.”

Such confident design leadership is hardly new to Montreal. Through much of its existence, aesthetic reverie was the norm. In Old Montreal, the gorgeous, well-worn Saint- Sulpice Seminary was built in the 1650s using the rough-hewn limestone favoured by French colonists. In the 1930s and ’40s, art deco master architect Ernest Cormier built signature buildings across the city, including the Université de Montréal and the residence of Pierre Elliot Trudeau. Montreal’s architecture reached even greater heights with Expo ’67. It’s hard to gaze over the block-like mountain that is Moshe Safdie’s Habitat, or Buckminster Fuller’s bubble-like geodesic dome, and not sense the experimentation and optimism of the time.

Soon after Expo, though, the city’s economy and culture fell into a long, steep decline, affecting architecture as much as everything else. The rise of Quebec nationalism, the kidnappings of the October Crisis, and successive separation referendums pushed many corporate head offices and hundreds of thousands of people down the 401 to Toronto. What followed was decades of crumbling infrastructure, corrupt municipal governments, and a shrinking local economy. Until now. Credit this new energy to Montreal’s surging GDP — the highest in Canada in 2018, something that had not happened for at least 31 years — as well as low unemployment and rising wages thanks to an influx of tech, media, and video game companies. Suddenly, after decades of drift, the city has come back to life, buoyed, in part, by its mix of amazing social programs (subsidized daycare, dirt cheap university tuition) new political stability (separatism wasn’t an issue in the recent provincial election) and relative affordability.

The impact of all of this on local architecture firms has been radical. According to stats compiled by the City of Montreal, investment in residential architecture more than doubled between 2015 and 2017, from $600 million to $1.3 billion (homes in Montreal, while getting more expensive, are still a fraction of the cost of the houses in Vancouver or Toronto, leaving buyers enough cash to renovate). Commercial and institutional investments grew from $7 billion to $7.8 billion over the same period. And the number of up-start architecture studios is surging: for every firm that opened between 2005 and 2009, more than two opened between 2010 and 2017. Montreal architect Natalie Dionne has experienced the change first-hand — and is thrilled. She has been an architect since 1992, but is now completing her most interesting projects yet, including a series of bold updates to pre-war homes that mimic the proportions of the brick originals with the appendage of dark black boxes.

Black in a residential project can be risky — too sombre and dour for many to live with on a daily basis. Dionne’s renos, though, are more re-energizing than they are ominous. A simple noir canopy over the back deck of a Westmount remodel, for example, adds a graphic edge, made warmer by a soffit of cedar slats. A similar tack is taken inside, where black and white kitchen cabinetry intermixes with luxurious, beautifully veined walnut. Rather than being overly austere, the black seems to vivify the design. One of Dionne’s principal architects, Martin Laneuville, originally pursued a career as a prop and set designer after graduating from architecture school in the ’90s. A decade ago, he felt inspired to return to his original vocation. “Clients used to be a lot more conservative,” says Laneuville. “They weren’t necessarily open to contemporary ideas. A lot has evolved in the last decade.” It’s an idea that Dionne seconds: “The architectural knowledge of the population has grown,” she says. “And thank God! Clients are allowing us to be much more audacious.” The audacity is equally evident in her urban and rural projects. A retreat she designed in the Laurentians looks like a charcoal-coloured teeter-totter, with the main living volume precariously cantilevered out from the crest of a hilltop. It takes a lot of confidence (not to mention engineering) to attempt a move like that, but when successful, it proves rewarding: not only does the space under the house leave room for a covered carport, but the living room above gains a unique vantage point in the trees.

Confidence is also something that defines La Shed, one of Montreal’s most successful (and youngest) firms. The studio was started in 2011 by three friends — Yannick Laurin, Renée Mailhot, and Sébastien Parent — who met while studying at the Université de Montréal a few years earlier. Most architects don’t start their own practices until well into their careers, after years of training under more experienced designers and waiting for the first, all-important client. But as twentysomethings, Laurin, Mailhot and Parent took a leap of faith. Without a patron, they pooled some money, bought a typical downtown duplex — the kind with exterior wrought-iron stairs and little to distinguish it from its neighbours — and converted it into an ultra-modern home, where cool white tones offset strong black accents. Not only did the result sell for a profit, giving the team seed money to quit their day jobs, but it garnered the press attention that helped them build a client base. They are so popular these days that prospective clients often have to wait a year or more before a project can commence.

Crucially, La Shed’s daring didn’t stop at the way they founded their business. They consistently push the limits of their design aesthetic — for which they are always winning awards. In addition to the RAIC Emerging Practice Award, they were also given the Canada Council’s Ronald J. Thom Award for Early Design Achievement in 2018, another high honour. Recently the Quebec architecture association gave them a design excellence award for one of their homes by La Fontaine Park, in the city’s east end — praising the way it both blends with the surrounding 19th-century mansions and elevates contemporary architecture. A curving staircase makes a statement in the middle of the house, while herringbone floors evoke Victorian-era salons. But much like the anachronistic costumes in The Favourite, all of the geometries are pared down, simplified, and made fresh in a purely black and white palette. One of the most opulent features of the place is the wine cellar — a status symbol through the ages. But La Shed has reimagined the space by encasing it in milky, back-lit glass. The shadows of bottles pop out of the celestial glow at anyone walking by — apparitions of happy nights to come. La Shed is a small firm — about a dozen designers. But even larger studios are taking big risks. Architecture49 has offices across the country, and typically does big institutional and corporate work — schools, hospitals, offices. Recently, though, the Montreal offshoot finished the new club and driving range for a golf club on Nuns’ Island, just west of Montreal. On approach, the sleek black structure appears to hover just above the grass, a bit like a spacecraft floating in mid-air. Closer up, it’s clear that the effect is created by a heavy timber structure, all in pale blond maple, that seems to disappear into the natural surroundings. It’s hard not to feel like you’re standing in a cool, futuristic vision while putting a ball on a tee.

The only thing cooler might be the expansive views of Montreal’s skyline in the distance. It’s the kind of immensity that’s inspiring. With the myriad skyscrapers mixed with old Cathedral domes and quirky walk-up duplexes, it’s clear that so much great architecture has happened there, but there’s also still so much to come.