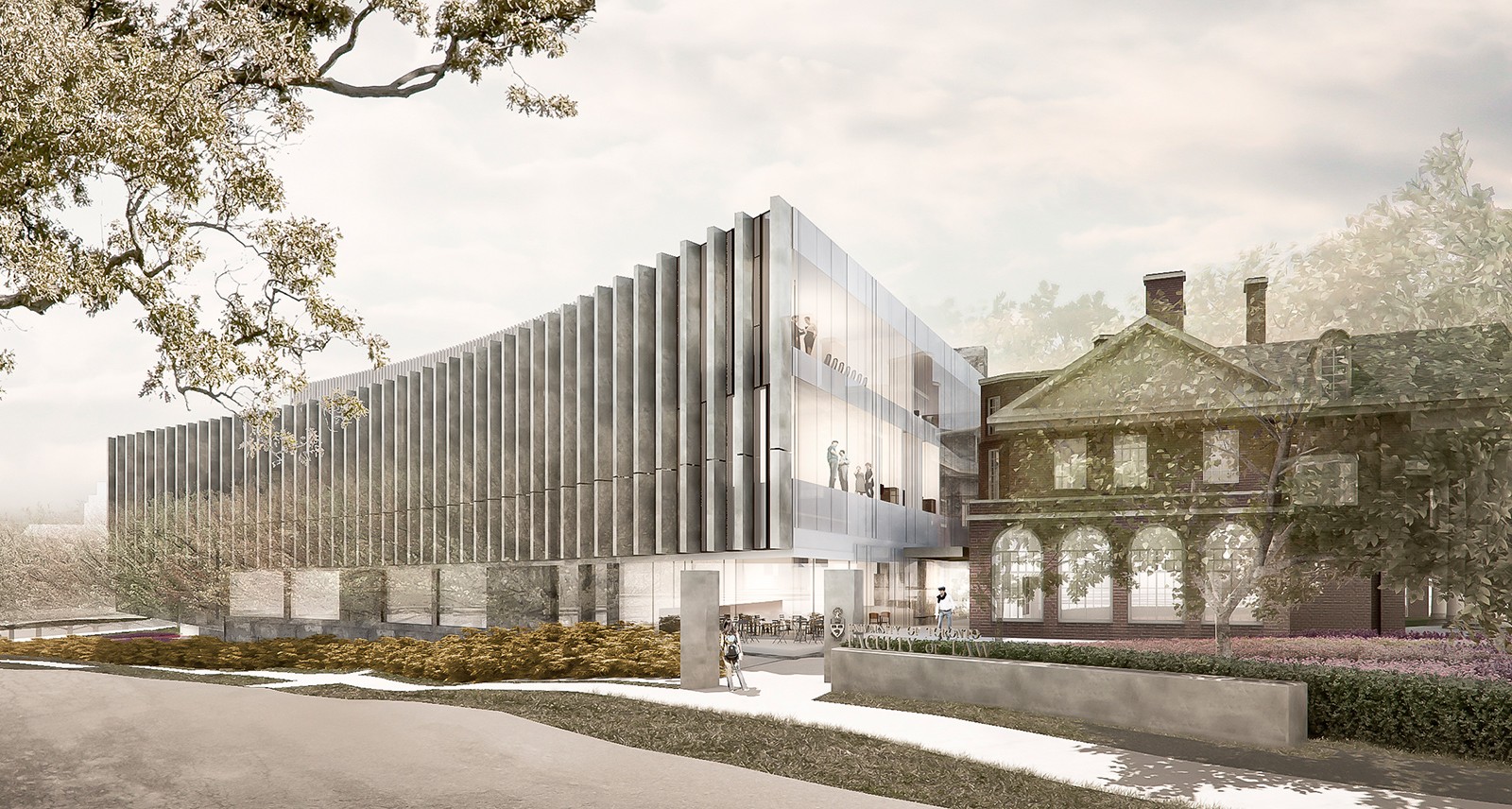 In 2012, the architect Siamak Hariri contacted his French stone supplier with a tricky request. Since 2003, he’d been working on an ambitious legacy project, the Bahá’í temple of South America, located on the outskirts of Santiago, Chile, where housing developments meet the Andean foothills. There are only eight Bahá’í temples in the world, and to get a commission for the ninth — awarded by the Universal House of Justice, the religion’s Haifa-based administrative body — Hariri beat out 180 international competitors. Luminosity is a key theme in Bahá’í scripture, and Hariri envisioned a structure that not only absorbs natural light but is completely transformed by it. “How can we do a building that becomes embodied light?” he asked himself. And from what material would such a structure be built?

The stone supplier had an idea, but it was a longer-than-long shot. He told Hariri about a secret contact he had in Portugal — a family of quarry owners who, seven generations ago, unearthed a stratum of marble so unique they’d been holding out for the ideal buyer ever since. “It’s the right stone,” said the supplier, “but they’ll never give it to you.”

That year, Hariri flew to Portugal, temple plans in hand, and over a series of meetings and conversations spanning six months, convinced the quarry owner to sell him the marble, 2,000 square metres in total. 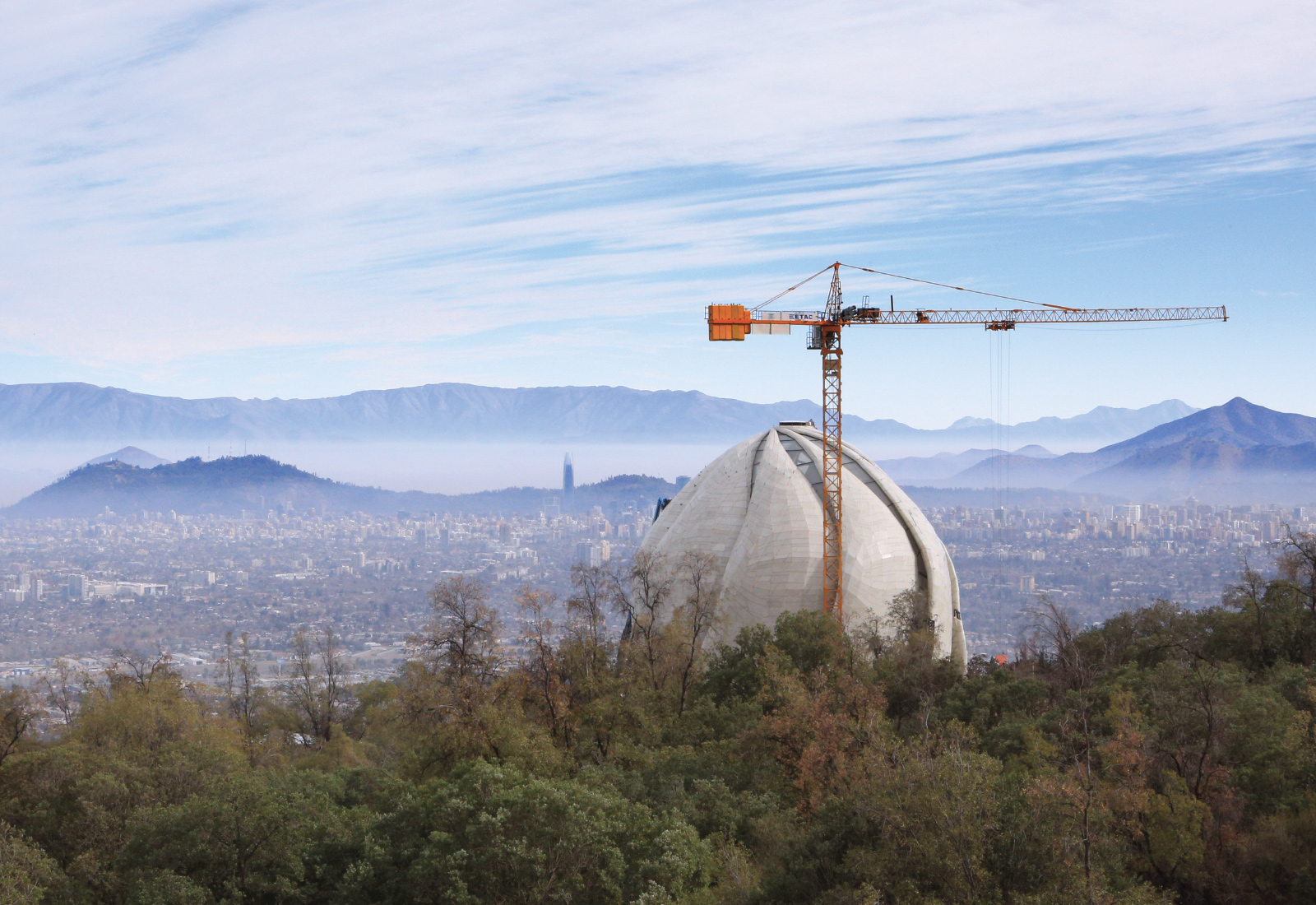 A small piece of this bounty sits inauspiciously in the offices of Hariri Pontarini Architects, the major Toronto firm that Hariri operates with his best friend and business partner, David Pontarini. In its shadowy corner, the stone seems unremarkable, but tilt it toward the sun, and it begins to glow, revealing a network of veins as intricate as meander maps of the Mississippi River. It also changes colour — from ghostly blue to dramatic orange to ethereal white — as the sun crosses the sky. It’s mesmerizing and scarcer than red diamond. Hariri got it by convincing a stranger to take an unlikely leap of faith. Kind of fitting for a guy who’s designing a temple.

Persuading others to trust you — with their materials, their reputations, and their money — is what architects do. “Architecture,” says Hariri, “is an old person’s game.” It takes time to demonstrate that you have that rare mix of technical skill and aesthetic sensibility, he explains. You have to prove that you’re worthy of other people’s faith.

For the last 23 years, HPA have been doing exactly that. Now their moment has arrived. They are already huge players on the Toronto scene (the downtown stretch of Yonge Street has so many HPA buildings it could be nicknamed Hariri Pontarini Row), and the rest of the world is quickly catching on. The American critic C.C. Sullivan singled out HPA’s 2004 Art Collectors’ Residence — a low-slung, majestically lit oak-and- limestone retreat — as the best new home on the continent. And in 2012, the firm was asked to propose a high-rise near London’s Canary Wharf, the beating heart of the global finance industry. Today they’re near completion on two giant projects — the Bahá’í temple and a 76-storey skyscraper at the Toronto intersection of Yonge and Bloor Streets — that can only grow their already burgeoning global profile. (Pontarini is the first to admit that he plans to soon work in New York and “the other great urban centres.”) 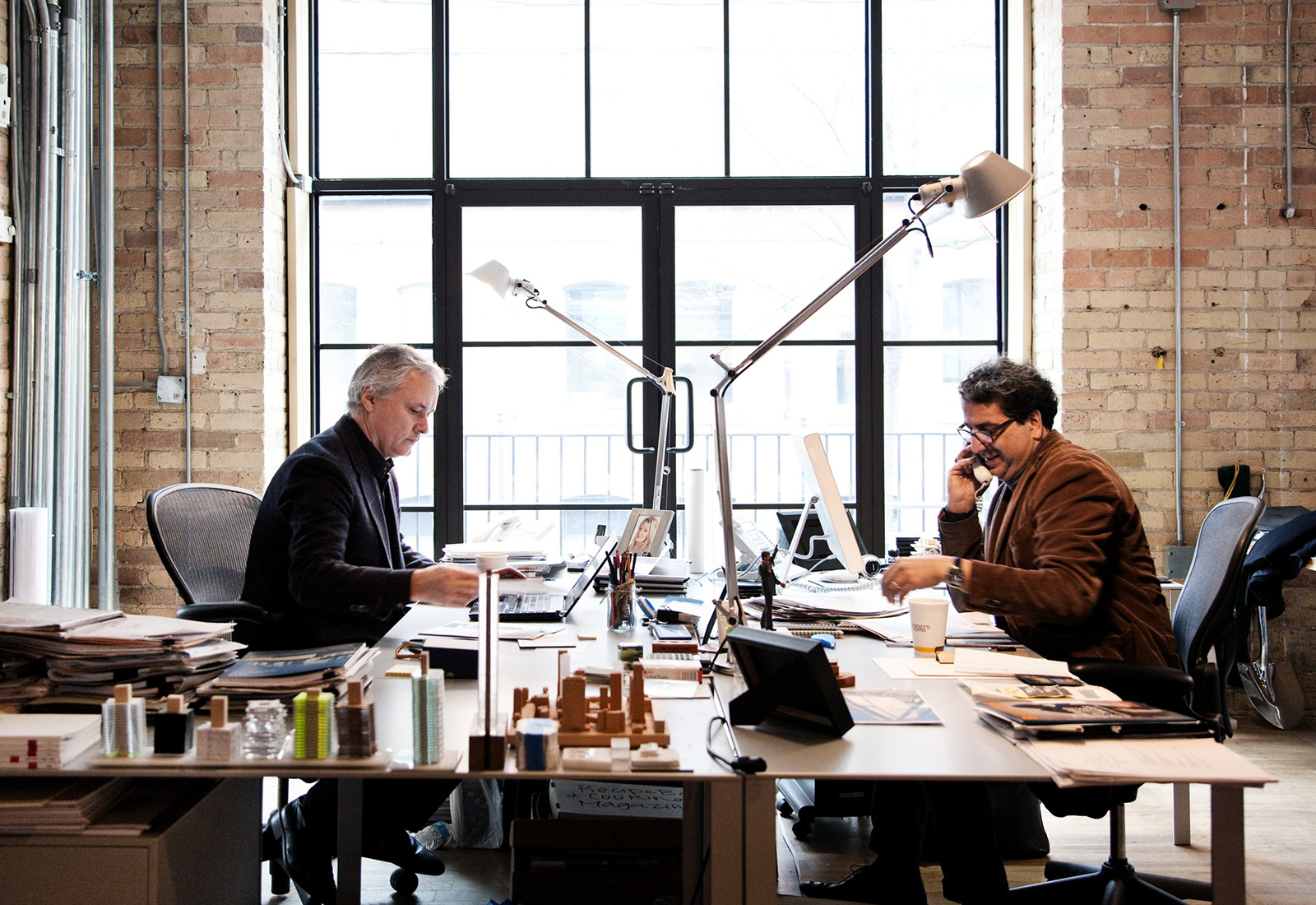 HPA is on the rise at least partly because they anticipated trends in architecture. The flush ’90s and early 2000s were all about the star-chitects, jet-setting titans like Frank Gehry, Zaha Hadid and Daniel Libeskind, who make buildings that seem to yell in order to capture your attention. What could be better, these architects implicitly asked, than looming concrete rhomboids and blinding titanium sails?

But today, critics and clients are increasingly interested in “wellness”: warm, inviting structures that make you feel at ease. Hubris is losing ground to sensitivity.

In the last three years, the Pritzker Prize, the discipline’s Nobel equivalent, has gone to Japan’s Shigeru Ban and Chile’s Alejandro Aravena, modest, context-oriented designers who would’ve been unlikely Pritzker recipients a decade ago. Hariri and Pontarini belong in this world. They’re not afraid of aesthetic flourishes, but their work is never confrontational, never gaudy or extreme.

Siamak Hariri and David Pontarini met while working at KPMB Architects, a Toronto stalwart that would later help design the athletes’ village for the 2015 Pan Am and Parapan Am Games and the Canadian embassy in Berlin. There they began chatting about opening their own company. Three decades later, Pontarini is the high-rise guy and Hariri handles the institutional commissions, but they check in constantly, comparing ideas across their shared desk.

They come across, at first, as odd-couple opposites. Pontarini is subdued and soft-spoken. He talks about “restraint,” “elegance,” and the “hard, iterative slog” of designing a build- ing through trial and error. Hariri is effusive and charming, with his open-collared shirts and rakish, unkempt hair. He is keen to discuss the mystical properties of architecture — how it “lifts the spirits” and, at the best of times, “connects humans with the intangible.” These differences start to blur, however, when you look at the work. Pontarini, the sober rationalist, isn’t afraid of stylistic flare (his Massey Tower has curved corners and sculpted ribbon balconies) and Hariri, the mystic, shares his partner’s intense commitment to place-specific work.

In 1996, only two years after opening shop, HPA received a game-changing offer: the multinational management-consulting firm McKinsey and Company took a leap of faith and asked the young practice to help with their Canadian headquarters. McKinsey wanted a site that would be conducive to comfort and collaboration — what Ronald Farmer, managing partner of McKinsey Canada, called “the office of the future.” So Hariri outfitted the building with homey touches: fieldstone walls, fireplaces, and naturally lit meeting rooms. It was an atypical approach. In its unorthodoxy, it anticipated both the wellness trend and the hybrid relaxation-work centres that are now a tech-industry hallmark. In 2004, the building became the youngest in Canada to receive heritage designation, and it now has a sister site in Jakarta, Indonesia. 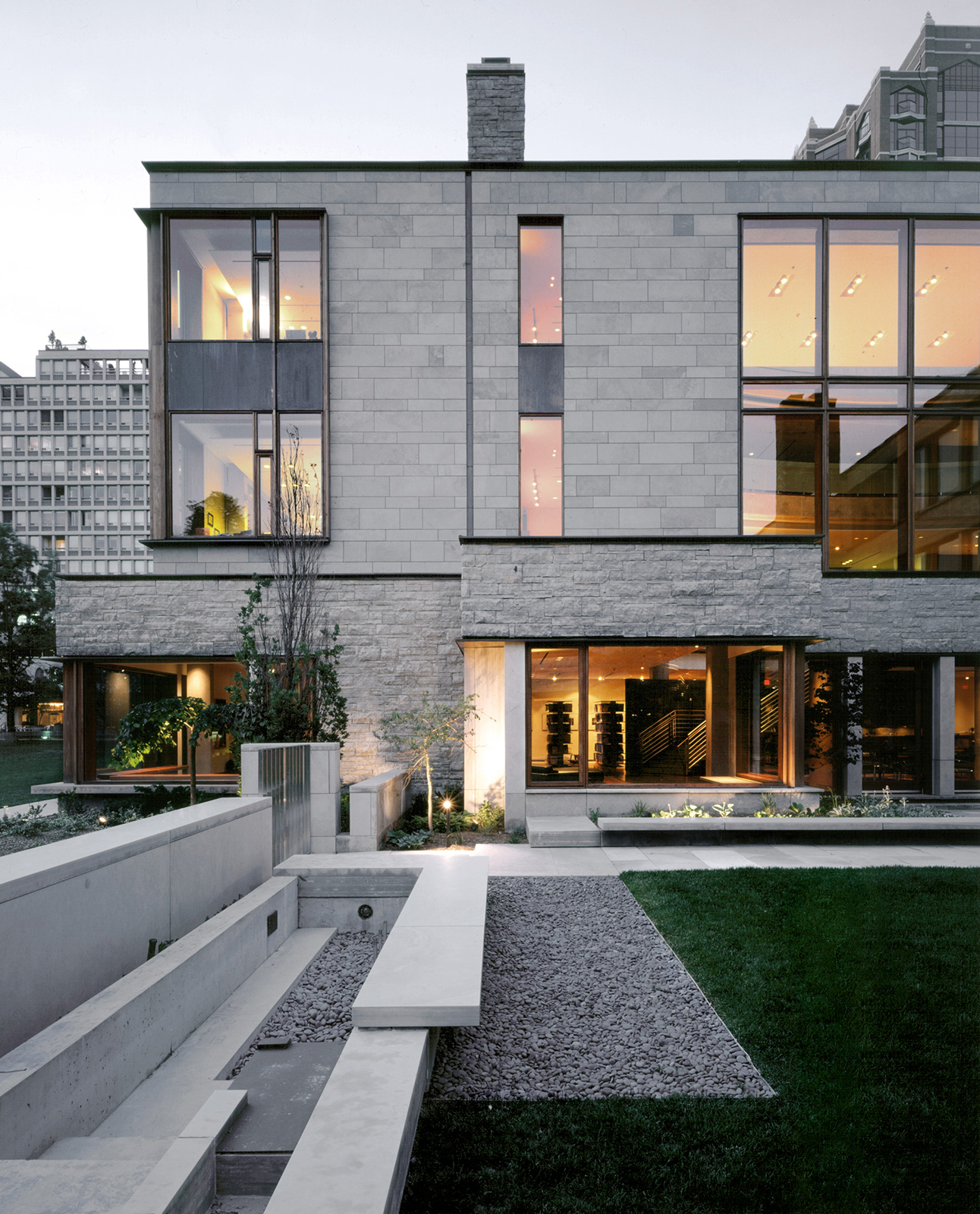 Small breakthroughs quickly gave way to big ones. The firm’s humble early works — a homeless shelter that combines two pre-existing gabled houses, or a modernist extension of a fusty Edwardian art gallery — made them attractive to condo developers, who knew that to build in Toronto they’d have to tiptoe around existing heritage sites. The city is desperate for density, but not if it means bulldozing whatever’s left of its architectural history. HPA specializes in this kind of agility: the medium-rise 7 St. Thomas condominium, for instance, knits six red-brick Victorian houses into a textured stone-and-glass box, with a milky glass tower emerging phantom-like behind it. It’s a gorgeous design that points simultaneously to the city’s genteel past and its dynamic future.

With One Bloor, the firm is making a grander gesture without abandoning its restrained approach. The intersection of Yonge and Bloor, Canada’s two busiest streets, should be bustling with downtown vitality. But the site has always been more dowdy than dapper, its biggest attraction a clothing store selling outmoded British haberdashery. That’s now changing, with British rockstar architect Norman Foster building a looming billion-dollar tower, with winter gardens inspired by the Rockefeller Center, on the southwest corner. HPA’s One Bloor, on the southeast, will be sharing space with a giant. But Pontarini wants to play to his strengths: not wild flourishes but softness, curved corners and textured facades. “It’s about reducing the design to something that is elegant but makes a timeless statement,” he says.

For One Bloor, he began with a computer model of a simple tower block and added undulating glass balconies, which break off in parts, leaving negative spaces that widen and narrow like rivers flowing up the structure. The floors of the six-storey podium base are each uniquely sized, their edges like bedroom drawers pulled out at random. The building protrudes, bulges and flows, depending on where you look, but there’s no grand metaphor at play. It’s enchanting architecture that doesn’t resort to crass attention-seeking.

If high-rise construction in Toronto seems challenging, it’s nothing compared to building a Bahá’í temple. Bahá’í conventions stipulate that each house of worship must have nine sides and nine entrances. And as Hariri points out, “you have to understand it instantly as a sacred space” but not as a mosque, synagogue or church. “Either you get it or you don’t. I can’t sit there and hand out pamphlets.” The House of Justice insists that the building be white papered to last 400 years, which means everything from the gaskets to the glass must be tested for ultra-durability. And, best of all, the temple sits on a seismic zone. Construction isn’t finished, but the building has already survived one major earthquake.

Constraints aside, it’s spectacular to look at. The domed structure comprises nine sails with Hariri’s veined marble on the inside and dappled glass on the exterior. The sails appear to twist and turn as they move upward, converging in a single point at the building’s peak. During the day, the sun illuminates the marble and bathes the temple in diaphanous light. At night, the lit interior gives the building a hearth-like glow. The partially complete temple has already won three major awards, and it’s getting serious attention, both from popular platforms (Pinterest and the Huffington Post) and the arbiters of architectural taste (Designboom and Metropolis magazines). 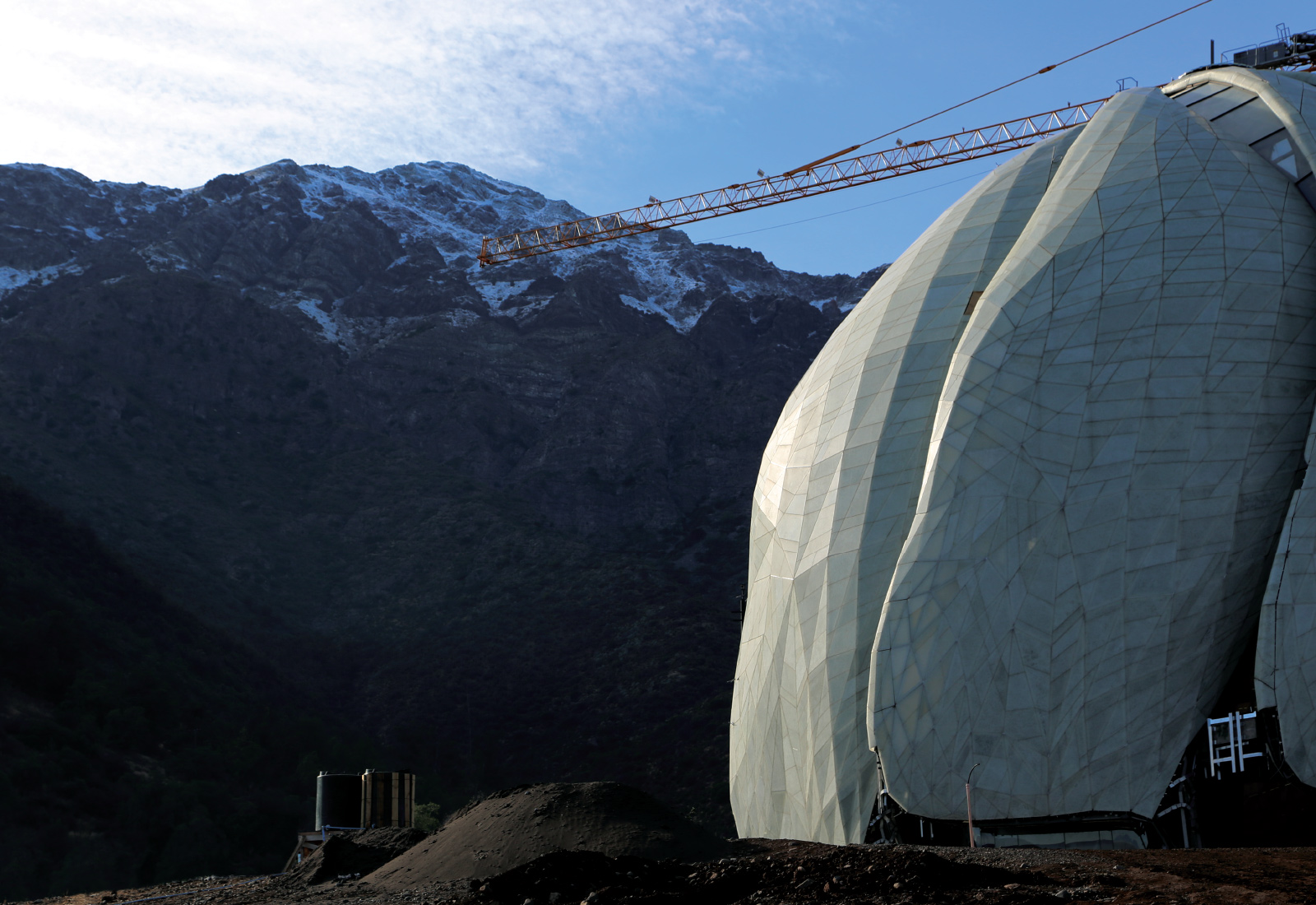 Why did the House of Justice choose HPA? Hariri, a Bahá’í practitioner, believes the firm’s uniquely warm aesthetic matches the open-armed ethos of the faith. The religion, founded in 19th century Persia, has no clerical hierarchy, and adherents of all belief systems are invited to participate in its services. The House of Justice wanted a building that seems at once transcendent and inviting — a place where seekers from all religions can instantly feel at home.

And since the McKinsey breakthrough, creating a sense of home has been HPA’s forte. There are rustic limestone walls in the residence of Ryerson chancellor Lawrence Bloomberg but also in Toronto’s Schulich Executive Education Centre. There are millwork benches, illuminated by windows, in HPA’s woodland and ravine houses and also in the prestigious Ivey Business School at Western University. Natural light is essential to every living or meeting room the firm designed — and it’s the central motif of the Bahá’í temple, too.

None of this, says Hariri, came about by accident. If all of HPA’s work seems friendly, even intimate, it’s because, no matter how big the project, the partners never abandoned their commitment to people-oriented structures. Many HPA buildings are also landmarks, and some are undeniably grand, but grandeur is, at best, priority number two. “I think of every building we’ve done as a home,” says Hariri.

Men Get Sad After Sex. Now We Have a Concrete Answer Why. And it’s not exactly what we thought