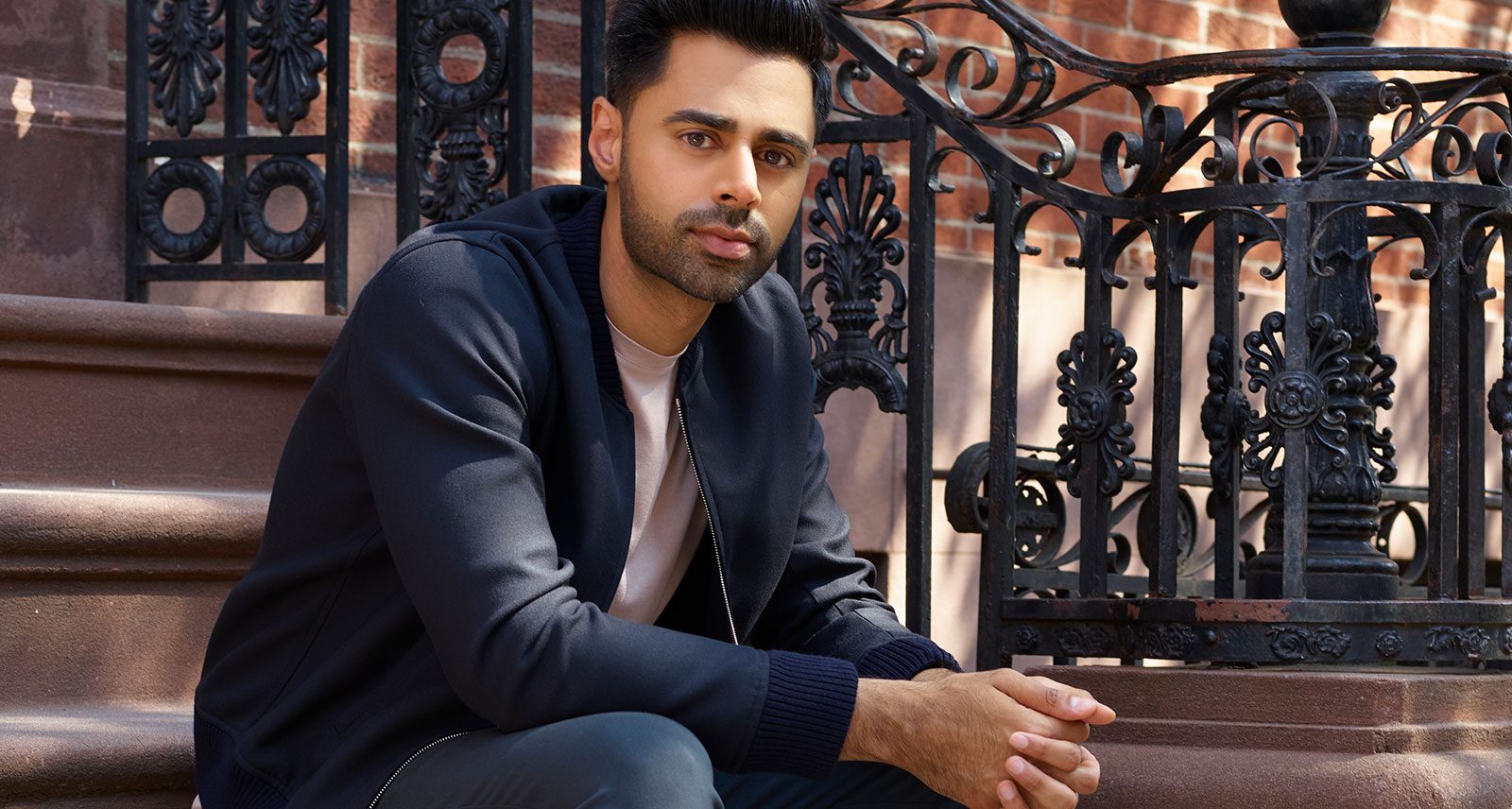 THIS STORY APPEARS IN OUR SUMMER 2020 ISSUE. FIND THE FULL DIGITAL EDITION HERE.

Hasan Minhaj is a man content. Happy, even. And why not? Despite how things may be playing out in the world around him, this summer is a very good time to be Hasan Minhaj. His wildly popular current affairs show, Patriot Act, just wrapped its sixth cycle (all episodes are currently available to stream on Netflix), all of which he wrote and filmed from home. And when he’s not on Zoom calls with his team of writers and producers, or standing in front of the elaborate green screen they built to facilitate the sudden change in plans, the 34-year-old is spending some much-needed quality time with his wife and two young children (one of whom, a newborn, arrived just as the pandemic was ramping up). We caught up with him in a rare free moment, to find out more about how he’s managing to live his own version of the American dream. How have the last few months been for you?

I’m hopping from zoom meeting to zoom meeting. This is our new reality. There’s moments of sheer joy and then deep despair. And that changes every five minutes, which is kind of wild.

You’ve been filming the show from home. How does that work, exactly?

In mid-March we were underway with cycle six of our show, shooting episodes with a live audience. And then things in Manhattan started to get very strange very fast. So we had to take a breather and recalibrate. One of the things I wanted to do was figure out how do we continue to make the show and have the same visual aesthetic we’ve always had. So we put together a proof of concept, which took us a little over a month, but I’m really proud of what we came up with.

Has your approach to the content of the show changed at all?

Now that we’re living through this pandemic, the news stories felt like they had to have a sense of urgency. COVID has affected so many things, and there’s an economic crisis on the horizon, so I wanted to pick ideas that affect peoples’ day-to-day lives: rent and evictions, marijuana, a whole episode with COVID supply chains and meat-packing plants, an episode on whether college is worth it.

What did you want Patriot Act to be when you first conceived of it?

There were so many stories that I wanted to do on The Daily Show, but when you’re part of an ensemble, you’re servicing the larger vision of the show and the host. I just couldn’t get them on the air. You need the runway room, and when you’re writing to ad breaks you’re constrained by the amount of time. When I got this show, I figured I’m on an international platform, there are no ad breaks, I have an opportunity to spread my wings. I want to talk about all the stories that should be talked about that don’t get talked about. I felt like there was a huge space outside of Trump gaffes and memes that were dominating Twitter, and that make up pages A1 through A8 of the NYT. Sure, a lot of people around the world know about the protests in Sudan, China and censorship, the elections in the Philippines. But that mainstream entertainment political satire audience wasn’t getting those from a voice like me. So I felt like I wanted to step into that with confidence.

What do you mean by “a voice like me”?

I think five years ago you would’ve never had a show called “Patriot Act with Hasan Minhaj.” That just wouldn’t have been a viable option for a network. I think two things happened. The general hunger for good information and knowledge has been on the rise since 2016, which I ultimately think is a good thing. And two, I think given the current political climate right now, a lot of networks and executives and even folks who are making choices when they’re sitting down on the couch, are starting to say, “Hey, I want to see more diverse voices and opinions.” Which is very different from the Daily Show/Colbert Report era that I grew up watching in the early 2000s. What kind of comedy did you grow up on?

I wasn’t super familiar with stand-up comedy. I was a speech and debate kid. I did public speaking competitions in high school and that was really fun for me! We didn’t have cable in our house growing up so I wasn’t familiar with stand-up comedy as an art-form. My parents emigrated to the United States in 1982. I had to figure out American culture just through TGIF and Fresh Prince, and going to middle school and having kids burn CDs and mix-tapes. I just kind of absorbed all of that.

Whatever I didn’t get at school, I kind of had a cultural renaissance in college, basically through kids illegally downloading stuff. It was like South Park and Seinfeld and stand-up specials and insane shit because of Napster and Kazaa. A friend showed me Chris Rock’s special Never Scared in 2004 and I remember watching it with him and I was like, “Wow, this is funny speech and debate!” It was so cool to watch someone have these opinions on things that I’ve talked about in my own living room. You know, Chris is really bold and brash, he’s talking about politics and race in a really bold way that I didn’t think was possible. And that idea just blew my mind, that there would be thousands of people in an audience listening to him make jokes about the war in Iraq. I became hooked to the art form.

How do you see yourself now? As a comedian? A political commentator? Does it matter?

For me, in my gut, what I’m really just trying to do through the show is distill these issues in a comprehensible, conversational way that’s funny. Someone wrote something really nice about the show, and it really stuck with me because I always wanted the show to be like that. He wrote: “A lot of times people say art and comedy make the world smaller. I would disagree. The show Patriot Act is making the world feel bigger.” And that’s what I wanted to do. I wanted to expand people’s perspectives. To see the world in a bigger, different way.

You’re hosting the White House Correspondents Association Dinner for the second time. What’s changed since the first time you hosted three years ago?

By the time this even makes print the news will have changed again. But when I first did it, it was just on the heels of Trump winning, and the Muslim ban. So many things were in the zeitgeist at the time. His war with the press was just really starting. Now we’re many White House Press Secretaries in. Trump has made his comments in regards to social media and censorship. The role of the media has also changed. That gig really almost serves as a comedy State of the Union. You get to recap and give your perspective of the political administration and the current state of some of the media institutions that also cover the administration. And those two things are really important, because those shape the entire discourse around American politics. It’s a really powerful gig. I’m very aware of that.

What did you learn from the last time?

It was a really weird thing because I was still a correspondent on The Daily Show. It all happened really fast and I didn’t really…it’s still one of those things that didn’t feel real. I didn’t take a whole lot of time to think about what was happening. But a few days later someone from Anna Wintour’s team called and said, “Would you come to the Met Gala?” It was just this bizarre acid trip, you know? One day you’re in the Hilton in Washington DC and four days later I’m standing next to Jaden Smith and he’s holding locks of his hair on the red carpet. It was a very surreal thing.

You spend a lot of time thinking about the state of the world. Would you consider yourself an optimist?

I try to approach things from a level of both optimism and pragmatism. Make no mistake: I’m a child of immigrants, and pragmatism and practicality runs through our veins. But I think something that’s common in comedy is a sense of extreme nihilism and wanting to napalm everything — and that’s just never ranked true in my heart. That’s not the vibe that I have. I’m married and I have two kids — that wouldn’t be a great way to look at the world and approach life. I’d rather acknowledge that there are extremely messed up things that are happening in the world that I have no control over, but I would rather focus on the things that I do have immediate control over.

What else has fatherhood taught you?

There is no winning, there is just surviving. Mike Birbiglia gave me that advice. I remember just before my daughter was born he was like, “Ok, Hasan, you know how like you always start the day thinking you’re going to do everything, and win the day? Once you have kids it’s just an assault from 6am when they wake up that totally thwarts all the plans you had. Once you have kids survival is winning.” And that’s true. The second thing is that time is this really invaluable commodity. I’ve always known that. But watching them grow up and watching these moments that are fleeting, you can’t put a price on it.