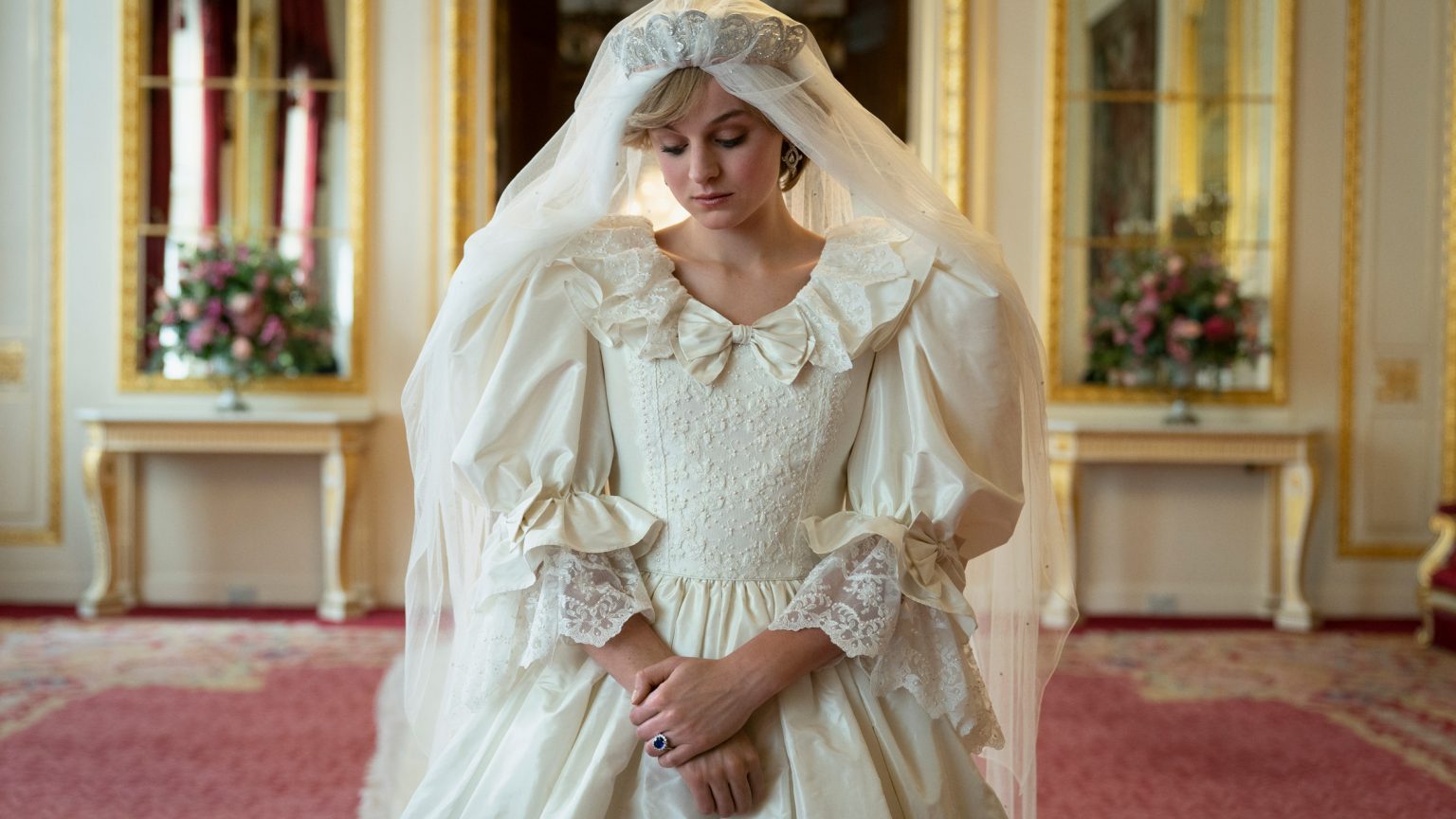 Costume designer Amy Roberts used the wardrobes of Princess Diana and Margaret Thatcher to reflect their complex relationships with Britain's royal family in the latest series of television show The Crown.

"You can go from forensic accuracy, like with the queen's military uniform, to flights of fancy and glamour – it's an extraordinary programme for doing that," said the designer, who created the costumes for the third and fourth season of the historical drama series.

"It's a mixture of the need to be correct about things, but also the need to look knockout," she continued.

"Yes, it's the queen and the king of England, the prince and the princesses, but I still feel it's a bunch of people in this huge opera."

The Crown recreates the life and reign of Queen Elizabeth II – played by Olivia Coleman in seasons three and four – from 1947 to modern day.

The latest season, released on Netflix, covers the period between 1977 and 1990 and introduces two pivotal figures: Diana, Princess of Wales, and Margaret Thatcher, Britain's prime minister from 1979 to 1990.

Conveying these characters' emotions and their complex relationships with members of the royal family was a key factor in the costume choices, said Roberts.

This includes the "toxic" journey that Diana, played by Emma Corrin, undergoes after her engagement to Prince Charles, played by Josh O'Connor, and her entry into the palace.

Diana, then Diana Spencer, emerges in episode one aged 16 in a leaf-covered mask and leotard, dressed for her role as a tree in a school production of A Midsummer Night's Dream.

"The first sighting of Diana is very unexpected," said Roberts. "We start off seeing her as a young girl with very little fashion sense. She's a plump, shy, charming, very appealing girl, and then she's sort of grabbed by the palace."

When Charles, who is the heir to the UK throne, meets Diana again she is dressed in pale yellow dungarees and a knitted cardigan, while in scenes following this she wears skirts and dresses layered with mismatching jumpers.

"I was trying to convey that kind of messiness of her beginning," Roberts explained, "like a teenager who hasn't quite got their look."

Even when she is given a wardrobe suitable for royalty after her relationship with Charles develops, she is still "finding herself", said Roberts. This is apparent when Diana and Charles go on their first royal tour of Australia and New Zealand in 1983.

"Australia was 'dressing-up-dolly' time," explained Roberts. "I felt for that whole section when she was still being somehow manipulated – you know, dress her up in a nice little outfit for every eventuality – that she hadn't quite got there yet."

Towards the end of the series, the unofficial separation of the couple and Diana's tense relationship with the royal family is reflected in her wardrobe.

"It's all a bit naff at the beginning, and then the middle bit is still a bit naff, but more expensively done, and then at the end it's clear where she's going to go," Roberts explained.

"Her look is a million worlds away from her first look," Roberts continued, referring to Diana in the final episode, when she wears a floor-length black dress with a suit-like collar.

"They're vile to her," said Roberts. "It was a moment when I feel she starts putting on armour, and that's what she's going to be doing in the next series."

"This is the first real moment where she thinks, 'I'm gonna fight you lot, I'm going to survive'. So she puts on a killer black dress."

t was the most fantastic thing to be able to show people, not just the Diana that I think we all remember; this amazingly glamorous, attractive, vibrant creature... but the journey to that point," added Roberts.

"[She goes] from this strange little creature in leaves to this woman looking so sexy and strong at the end. It just sums her up to me."

Discovering more about the woman outside the politics was key for Roberts.

"I think, for a lot of us in England, her politics are very problematic, and just to rid myself of that, and understand this extraordinary woman was fantastic... to do what she did in that era was quite phenomenal," said the designer.

The Crown also shows a more domestic side of Thatcher, who has the chiefs of staff over for dinner and ties a floral apron around her waist before preparing the food.

"It was a bit of a fantasy," Roberts said. "[Recreating] that incredible femininity she had... and it's just weird, isn't it? That powerful woman who takes us into a war with the Falklands is making cottage pie."

According to Roberts, the most interesting process was creating outfits that reflected the strained dynamic between Thatcher and the Queen.

"We [Roberts and director Paul Whittington] spent a lot of time discussing the emotional state of both those women in each scene," she said.

"You have Thatcher at her most jingoistic and militaristic when the Falklands War is happening, and the Queen is very dismayed about this happening."

"So we put Thatcher in a very English, white and blue suit... square shoulders, strong, and the Queen is very maternal and softer in that scene," she continued. "The two are very opposing, and it's the only time that it's quite funny. It's quite gently comic."

Aside from Diana, who Roberts describes as "a breath of fresh air", and Thatcher, the fourth season sets itself apart from the previous series in that it has more solidity, said the designer.

"There's a steadierness with [season] four, there's a darker palette," Roberts explained. "The textures aren't as light as [season] three, and certainly the colours aren't."

"Everybody's kind of in their middle; middle age, middle ground. Anne is married, there are children... The Queen is more settled in her role, her marriage."

"[The Queen's clothes] are lovely, but they're less exciting – it's slightly more 'middle-aged mum'," she continued.

"I wanted her to be more in the background... this steady, background influence, which is what the Queen is, particularly now," said Roberts.