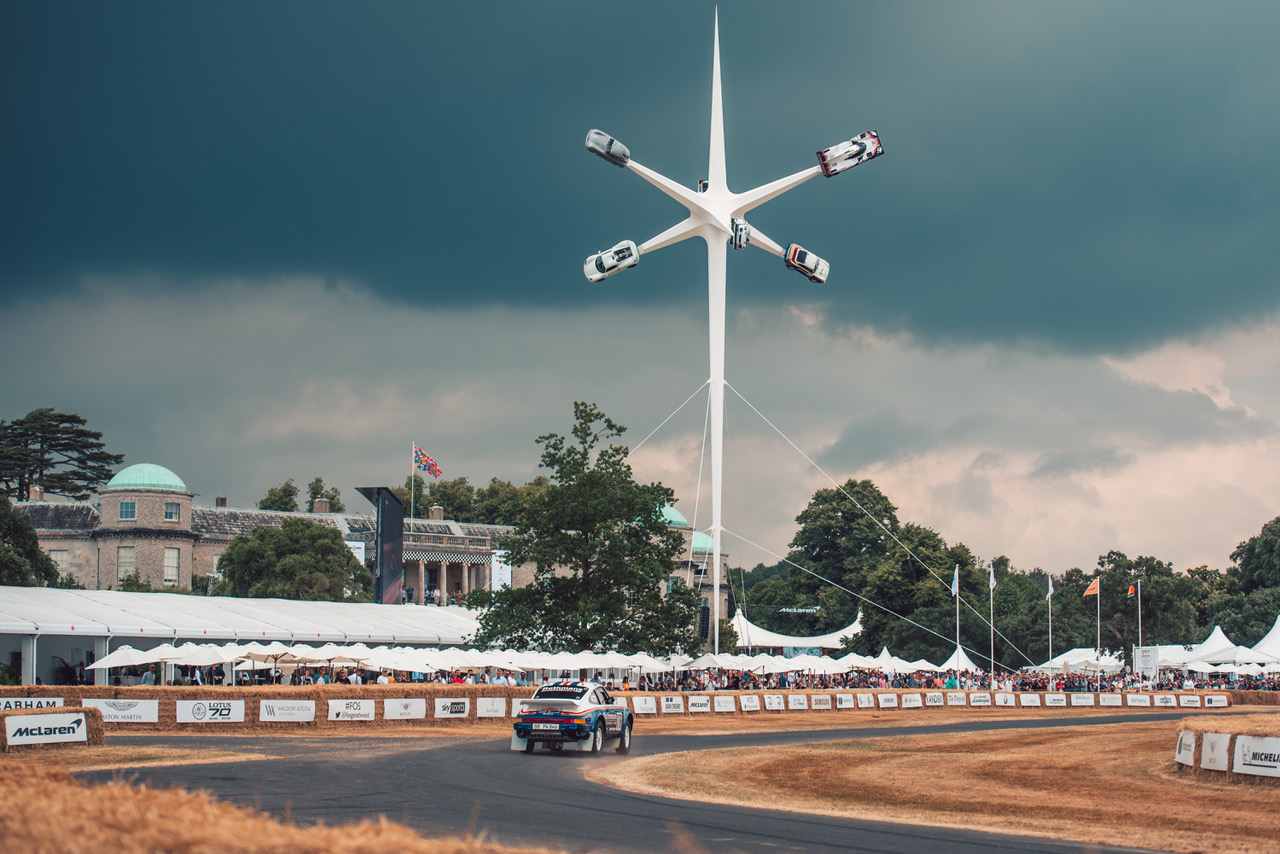 Were it not for two significant factors, the Porsche 953 would have remained but a minor footnote in the history of the Zuffenhausen company. The first factor: it helped develop the absolutely incredible 959. The second: its four-wheel-drive system became the basis of the system used in the production 964 Carrera 4 and, in philosophical terms, made it possible for customers to get used to the idea of an AWD 911 Porsche. 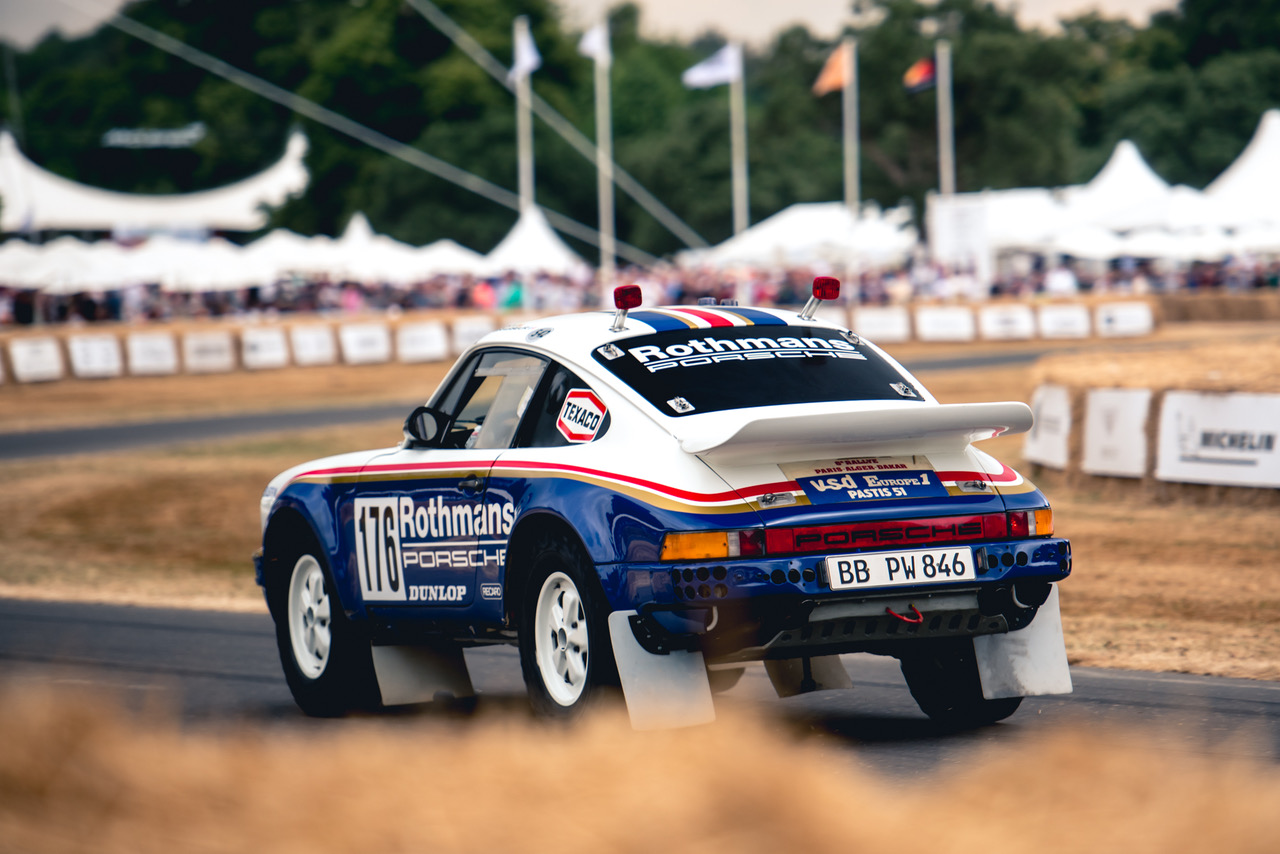 The development of the 959, a car which was really ahead of its time (this is not a figure of speech), took longer than predicted, as many of its constituent systems were the first of their kind ever designed. In order to give the new hypercar supreme reliability, Porsche engineers contemplated running some development mules in competition. Helped by the tobacco sponsor Rothmans and encouraged by the Belgian star driver Jacky Ickx, they decided to run some converted 911's in the grueling Paris-Dakar rally. 8,000 miles of pure murder for cars. The cars entered were known as the Porsche 953, with 3-liter 300-horsepower 3.2 liter Carrera engines, and a 4wd transmission with a 31%/69% torque split front/rear, including a manually lockable center diff. Running on raised suspension, they performed surprisingly well, with Rene Metge winning the rally outright, and the other two cars (only three had been built) arrived at the finish in 6th place (despite Ickx being stranded for hours with electrical problems) and in 27th place.

In July of the year 2018 I was attending, as always, the Goodwood Festival of Speed. I have been driving cars there since 2010, and every drive presented a unique challenge: the car driven was almost always unfamiliar, and at the FOS there is no opportunity to practise. Either you can thread the car up the narrow and slippery hillclimb course, or you can't. When I set my eyes for the first time on the 953 in the Porsche paddock, it looked very serious. The car, also known as a 911 SC 4x4, was taller than I recalled, looked fantastic in the Rothmans livery, with all the patina, scratches and dents typical of a rally car which had crossed a number of deserts. The engine was freshly restored, strong and generating an enticing baritone burble. After a short talk with a Porsche Museum mechanic I simply got into the driver's seat and drove the car into the pre-run assembly area. 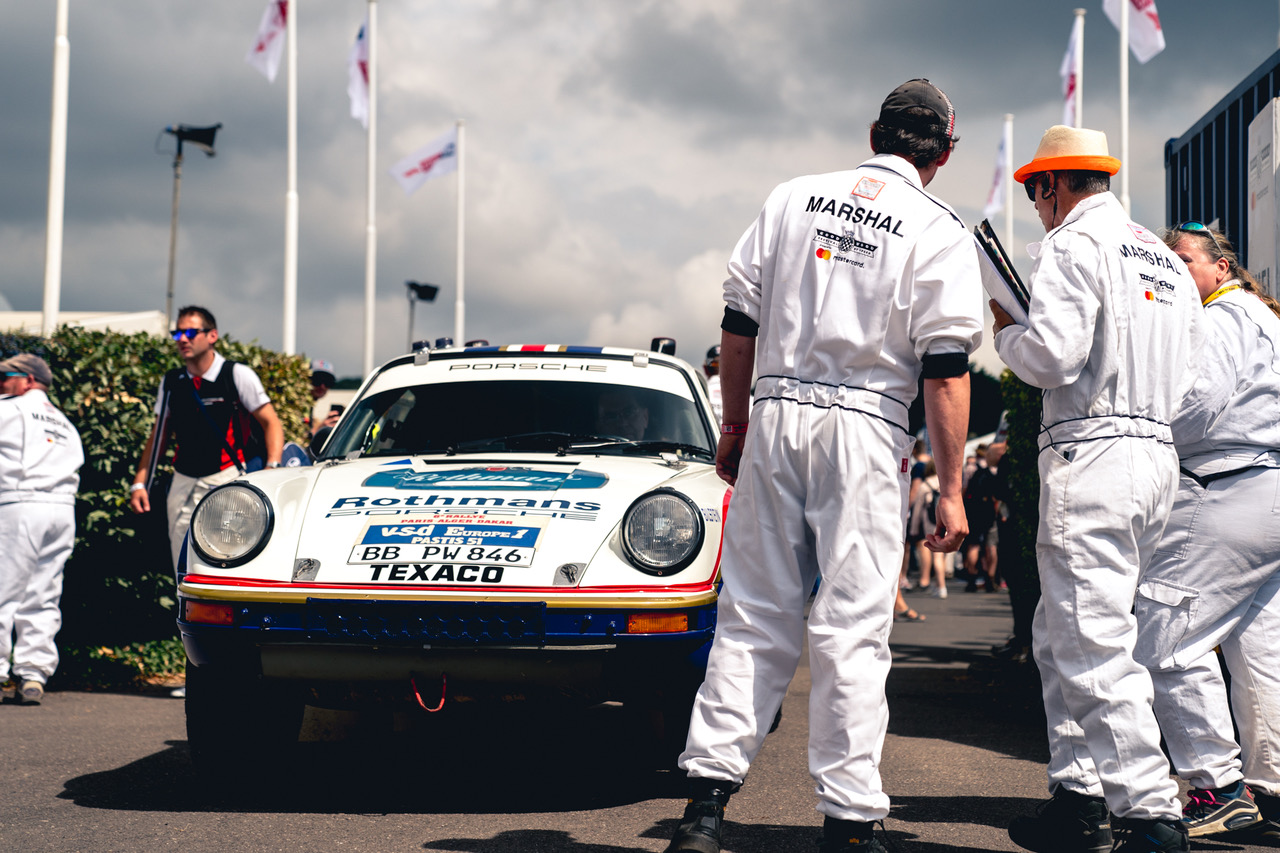 I knew everyone there, at least by sight, and suddenly one of the familiar female marshals asked me if the car had been scrutineered and issued a starting number. I shrugged, as I assumed all the paperwork had been taken care of. How wrong I was... She pointed to a corner of the assembly area, behind the fueling shed, and told me to park there and await my fate. The chief steward walked over and stated that the car would not run. To say that I was furious would be an understatement. The Porsche staff, in their neatly pressed clothes, kept telephoning someone, and very obviously had no idea what to do. I was not going to let bureaucracy stop me from driving this ultra-rare Porsche up the hill, so I ran over to the Chief Scrutineer to beg him to check the car on the spot, and then begged him to convince the Chief Steward... the car got a number and we were back in business. Five minutes later, to the surprise of the friendly Porsche Museum mechanic, I was able to put the car in the line of legendary racing Porsches ready to leave the assembly area. 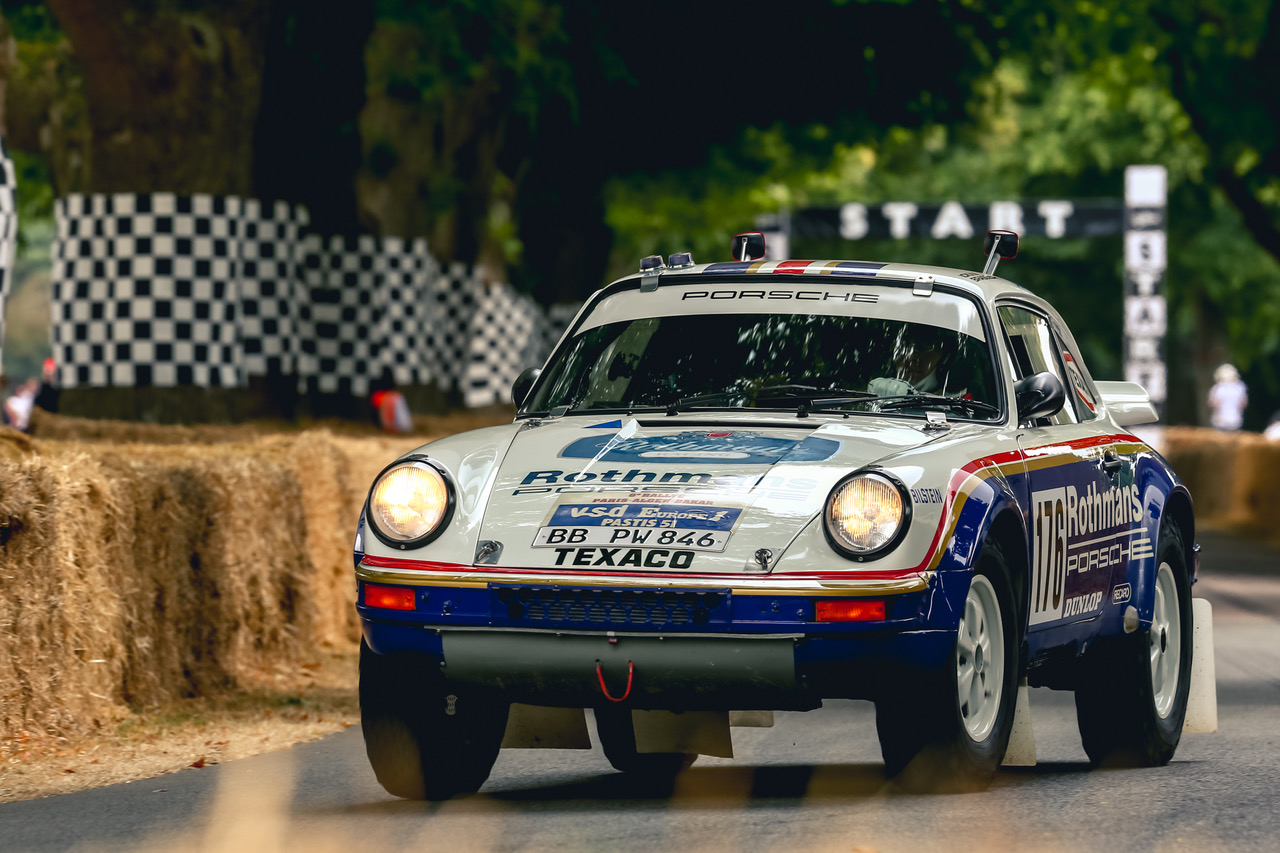 If you ever are lucky enough to be offered the chance to drive a powerful and unfamiliar car up the Goodwood hillclimb, you need to understand that the only chance to get a feel for the car's handling is when you leave assembly, turn sharp right and head to the start. It's only several hundred yards, but you do what you can. As soon as I could I started weaving to see how the car would steer, and it was immediately obvious that the combination of long travel suspension, a high center of gravity, tall tire sidewalls and huge tire tread blocks would mean a high chance of a spectacular roll. And of a need to crawl out of a smoking wreck. When cornering on tarmac, first the tread blocks flex and bend, then the sidewall gives, then the suspension compresses... each of the elements at a different rate. I realized taking it up at a decent lick of speed was going to be a challenge. And 50,000 spectators expect cars to go fast... 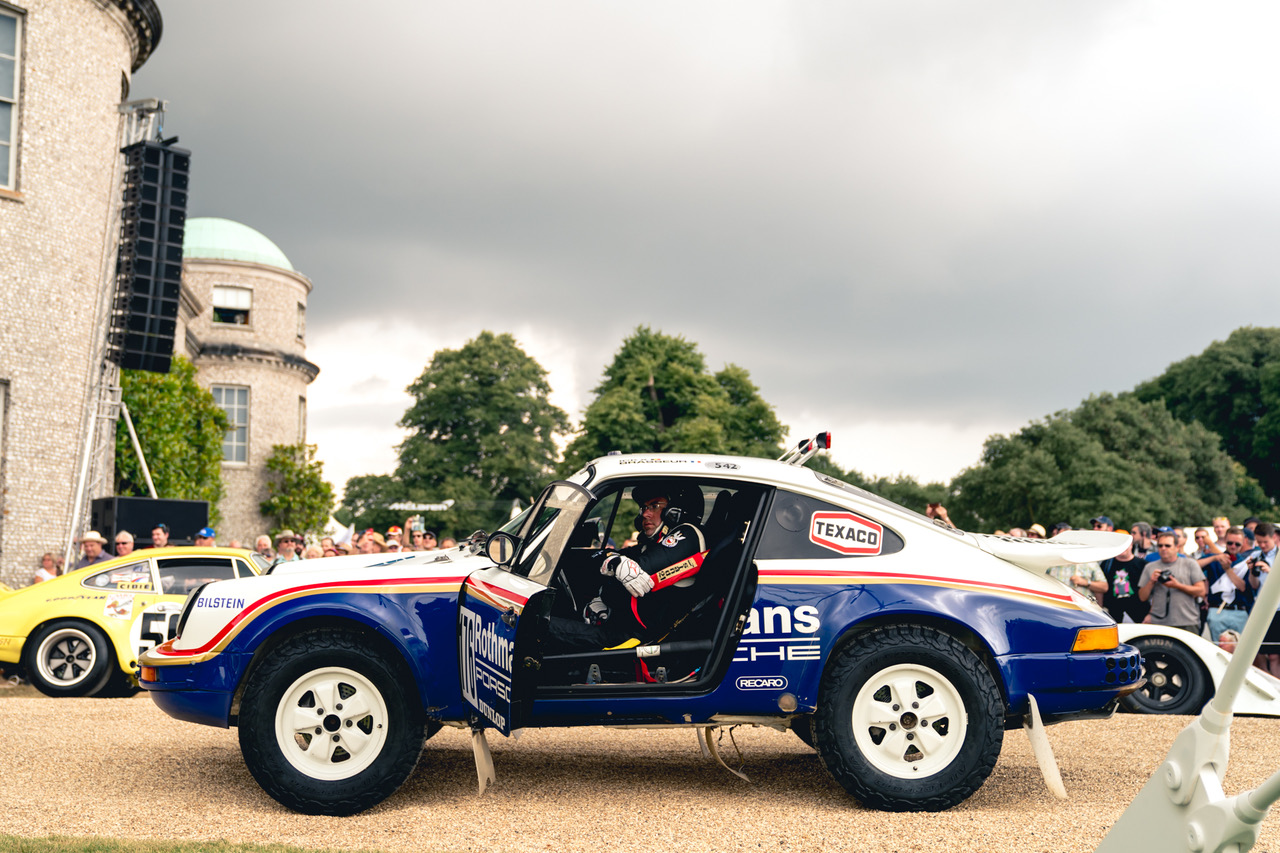 Once the green light goes on, I launch the car off the line (marked with real Indianapolis bricks) with no drama, just a loud chirp from the rear tires before the Porsche gains traction. The engine sounds fantastic, with its lazy burble turning into a throaty yell at higher revs. The first right-hander is covered fairly smoothly, but the second right-hand corner is much faster and I have to make a number of corrections, including a dollop of opposite lock. Accelerating in front of Goodwood House I could not help thinking that, given a few more runs, I could have learned to go faster in this rare car. Passing the pedestrian bridge, I am already thinking about the off-camber Molecomb corner, and decide to brake early: I as told the discs and pads were new and needed bedding in. The flint wall, two more corners, and the Dakar Porsche is at the top paddock, and I can climb out, catch my breath and hear the marshals telling the drivers to get back in their cars for the more leisurely drive down the hill. "My" car looks faintly ridiculous next to the 919 Evo which had just smashed the N√ºrburgring lap record. 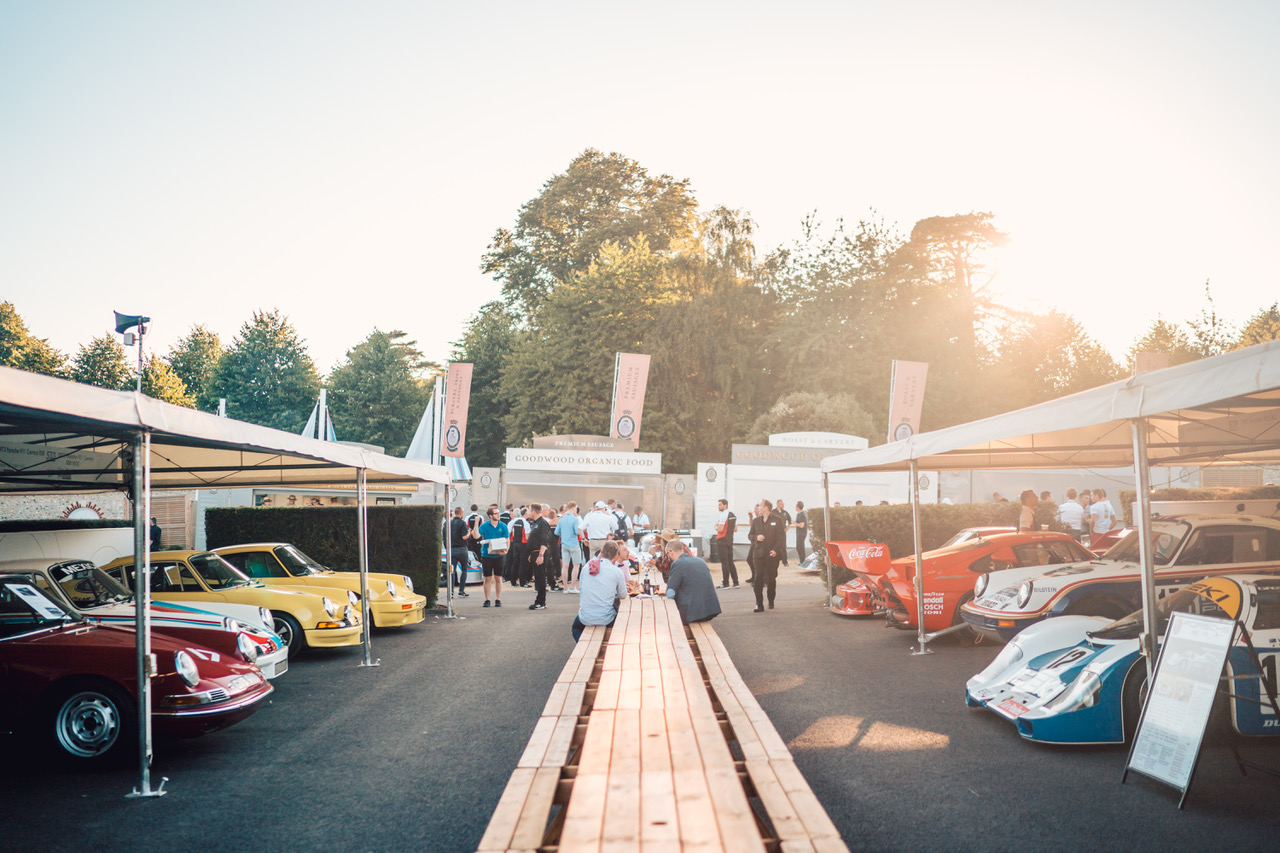 On the way down, a big surprise. The whole batch of cars is ordered to turn into the immaculate gravel driveway of Goodwood House, Porsche's 70th anniversary flags come down, an orchestra starts playing, a choir starts singing... A special and moving moment. I still can't believe I have driven this car here, and that I am surrounded by other legendary Porsches, including the awesome 961 and other bewinged monsters. Life does not get much better than this... well, perhaps it could, if I was allowed to drive the car at speed on the gravel. One can dream, right? 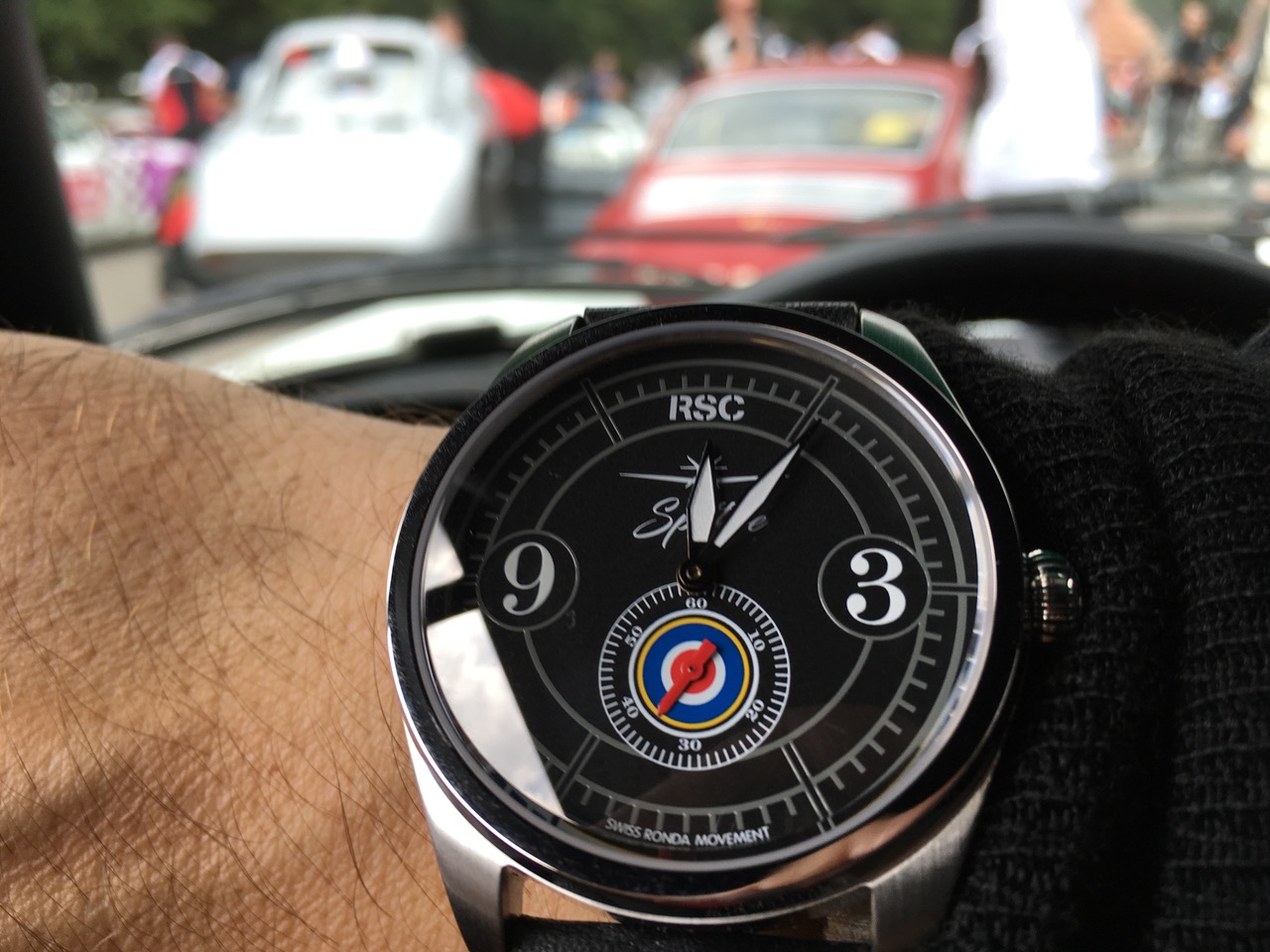