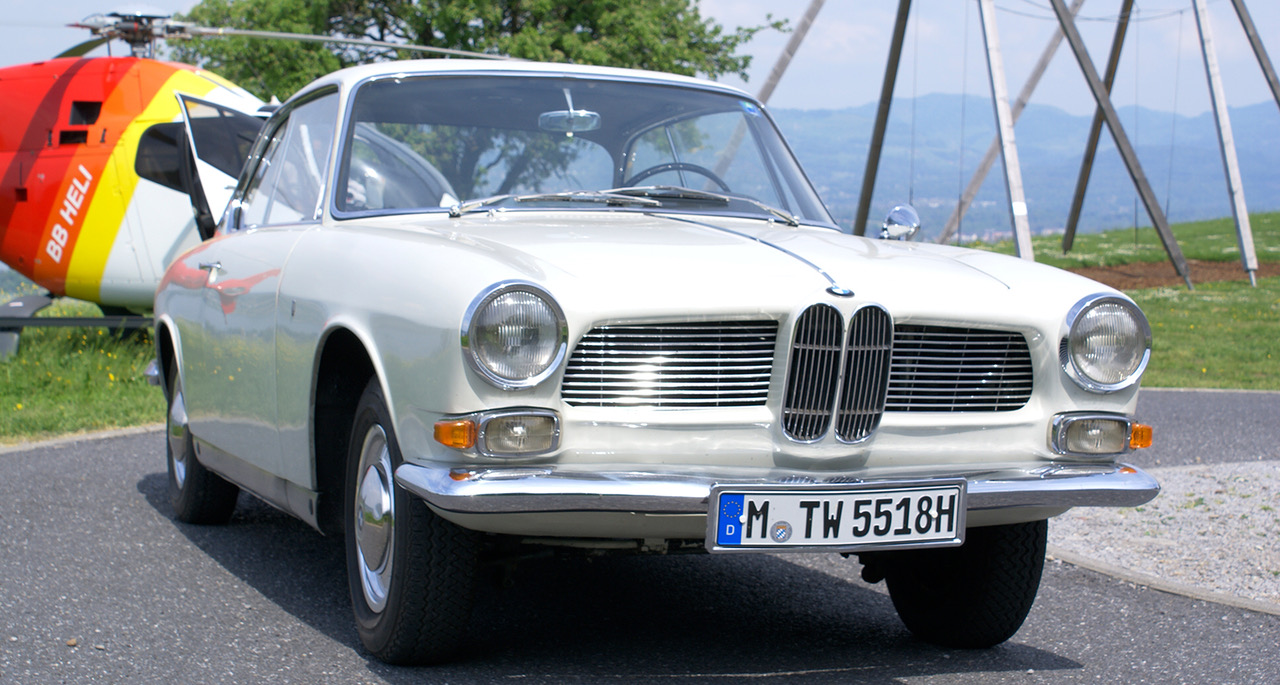 There is an old and indisputably beautiful coupe by BMW which is the 60's equivalent of an "instagram queen": a pleasure to behold and a nightmare to live with. Well, perhaps not a nightmare, but certainly a chore.

The beginning of the 60's was a dire period for BMW AG. The old V8-engined sedans were showing their age, the Isetta, produced under license, was paying some bills, and the 700 was not enough to keep the company afloat. In the end it was the Neue Klasse BMW 1500 and the coffers of the Quandt family which saved the enterprise from extinction, but before that happened, a last-ditch attempt was made to use the heavy V8 again in a car which could rake in some sales. There was an idea to put Lancia Flaminia Coupe bodies on the old BMW frame chassis, and assemble the cars at Pininfarina, but that was shot down by management (the dimensions were OK). Soon after that the board told Fritz Fiedler, the man responsible for the prewar 328, to commission Bertone (whose boss, Nuccio, was always a good salesman) to provide fresh coupe bodies for the aging mechanicals.

Bertone obliged, but even the magic touch of a young Giorgetto Giugiaro, who after his military service penned the BMW 3200 CS, could not persuade customers to part with their cash. The new car, based on an architecture from ten years before, was presented at Frankfurt in 1961, already looking dated then, displayed next to the unibody BMW 1500, later to be known as the Neue Klasse. It had the old, heavy steel frame underneath, the not-too-good V8 engine fed by two Zenith carburettors with its power output raised to 160 hp, a four-speed manual gearbox, front disc brakes and electric window lifters.

In terms of price, at 30,000 DM, it was precariously close to the price of a Mercedes 300SE Coupe with air suspension and an automatic gearbox, not an attractive deal at all. The customers thought likewise, and opted not to buy the cars. The next BMW coupes, 2000 C and 2000 CS, based on the platform of the Neue Klasse, were far more successful, and they used some styling cues from the 3200, including the low, level beltline, the tall glasshouse with thin pillars, and the trademark Hofmeister kink at the base of the C-pillar. The Hofmeister kink also appeared on the Neue Klasse, but by pure chance the 3200 CS went on sale a tiny bit earlier. The car was sold from February, 1962, until September, 1965, and around 600 units were shifted (hard to say exactly hw many, as most sources differ). In period BMW managers probably hated is as much as they had hated the 507, as both made the company bleed money it did not have. It's only now that both are appreciated and loved, and both command high prices, the 3200 CS sitting at the lower end of the auction value spectrum, with the best examples reaching just over 100,000 euros, peanuts compared to the millions one can get for a good 507.

The 3200 CS by Bertone is a good looking car, and a pleasant one to be in, as long as you don't plan on driving it. Um, you can try to drive it in a straight line, and you'll be fine. Driving it over twisty, sinuous mountain roads is where it gets nasty, and experience of 1930's cars comes in handy. The engine is made of aluminum, but it feels like a lump of lead pressing down on the front wheels. The steering is unassisted and very heavy at low speeds. If you never visit the gym, or do pushups by the hundred etc., don't count on threading the car easily through series of hairpins. The gearbox also does not like to be hurried, it's a bit like a uniformed German official who can't let you go unless you have filled out all the required forms, in triplicate. Any attempt to guide the handsome lever with more haste is met with graunching tones of protest. There is a lot of body roll, and the brakes slow down the car as if they hated the job. The view out of the wood-adorned cockpit is magnificent, so I am sure most users in period slowed right down and enjoyed the vistas instead of trying to force the car to behave like a sports implement.

My first encounter with the 3200 CS happened on the roads of Switzerland, and I was a passenger. The radio actually worked, but my colleague who was driving, was constantly complaining about the car. The heavy steering, the baulky gearchange, the excessive body roll seguing into heavy understeer. I was fed up with listening to him, and started to feel a form of the Stockholm Syndrome: I began to side with the car, to sympathize with it. I have an inbuilt love of the underdog, and I felt I had to prove my colleague wrong. After an abundant lunch which he spent partaking of the food on offer, and I spent taking pictures of the magnificent Carrozzeria Bertone creation, we swapped places. The first few miles I spent exploring the performance envelope of the car, which on paper can do the 0-100 kph sprint in 12 seconds, and can reach a top velocity of 200 kph. And then I showed him.

I set the car up cleanly for the bends, braked as little as possible, and used the throttle to rotate the car in the tighter corners. I used heel-and-toe rev matching on downshifts, relying as little as possible on the synchromesh, and the grateful gearbox started to lend itself to more hurried progress. My colleague looked suitably surprised. Picking up the pace even more, I started seriously pushing in the next section, with crests, steeper gradients, and narrower tarmac. The old lady still liked it fine, and let me play with her the way nobody had done for ages. I was grinning like a moron when, suddenly, we had a near-death experience.

It was a right-hander over a crest, and I was slightly past the limit, with all four tires howling a Wagnerian chorus. At that instant we came over the hill and missed hitting the rear wheel of a farm tractor, passing across the road, left to right, by an inch. Or less. Had I gone that tiny bit faster a few seconds earlier, we would be spread over the peaceful Swiss countryside in little pieces, and the car would be wrecked. To be honest, I mostly thought about the car. We looked at each other and I continued at an abated pace. I proved the old girl could dance, and once was enough. My feelings about the car became more positive because of this personal connection, but I still knew that it was a disaster when it was being made, albeit a truly elegant one.

Yes, it is great to look at, almost too perfect, but otherwise disappointing. Buy a 3200 CS only if you really want one.

This Is How You Take A Lamborghini To The Beach