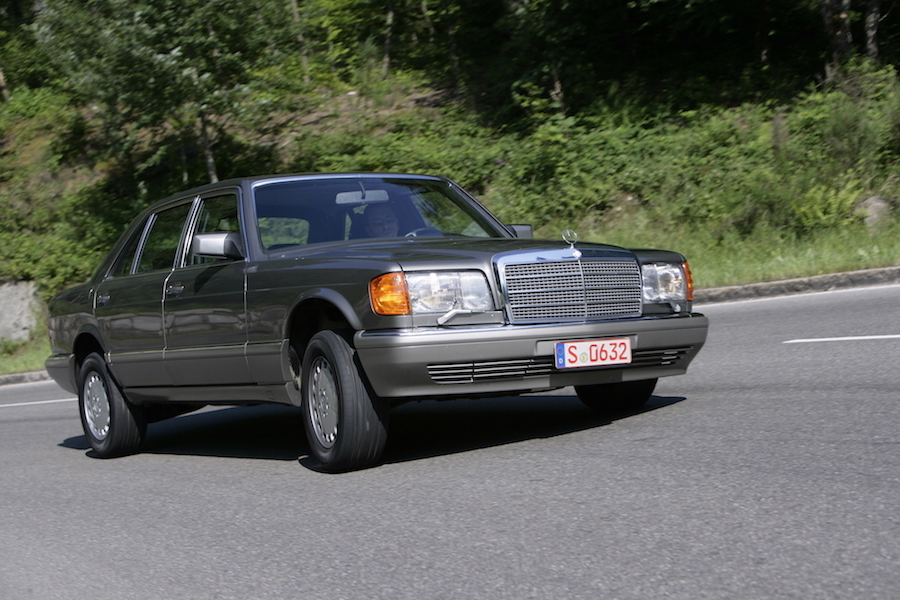 A stifling hot morning in Fellbach, on the outskirts of Stuttgart. I arrive in a sparkling new W221 S600 but I am here to drive a W126 (which model was reputedly used as a benchmark for driver fatigue by the W221 development team). This pristine example, kindly provided by Mercedes Classic, is a 1991 560 SEL with velours upholstery, self-leveling suspension and 3020 kilometers on the odo. It even SMELLS new. I can hardly wait. 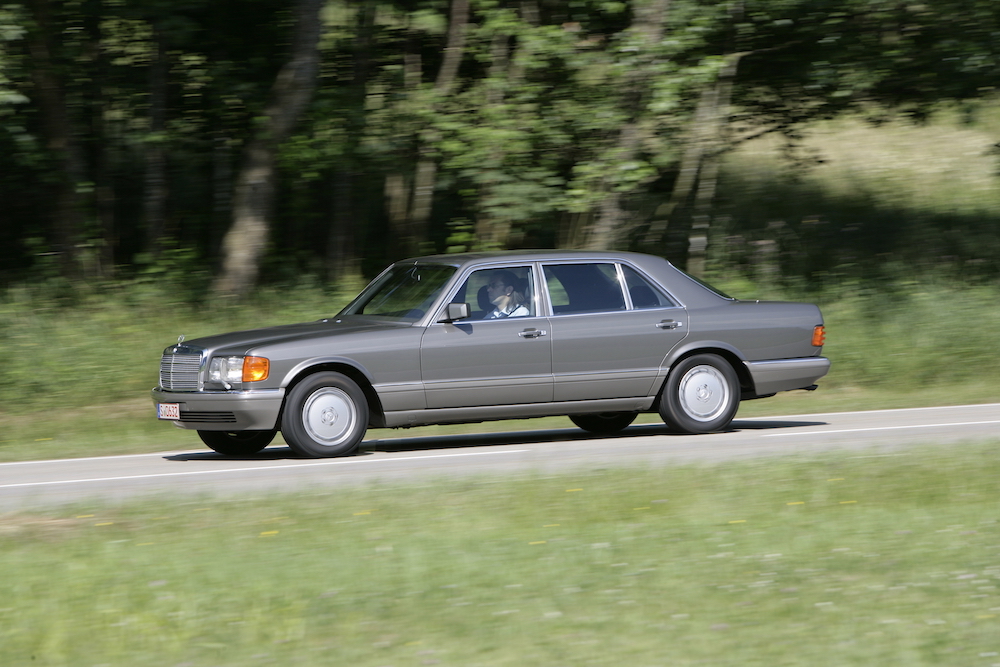 Behind the wheel of the W126 I feel instantly at home. The steering wheel is of the traditional Mercedes post-Strich Acht shape, the instrument dials look like those of the W123, the most legible dials ever created in the automotive world, with the trademark yellow speed limits. This particular car is incredibly well equipped, and, coming as it does from the Mercedes Classic warehouse, everything works. Including the pneumatic lumbar support for the front seats and the Blaupunkt analog radio which receives modern FM radio stations with no difficulty. I succeed in finding a station which broadcasts vintage German pop, probably sung by stern men with falsetto voices and handlebar mustaches. 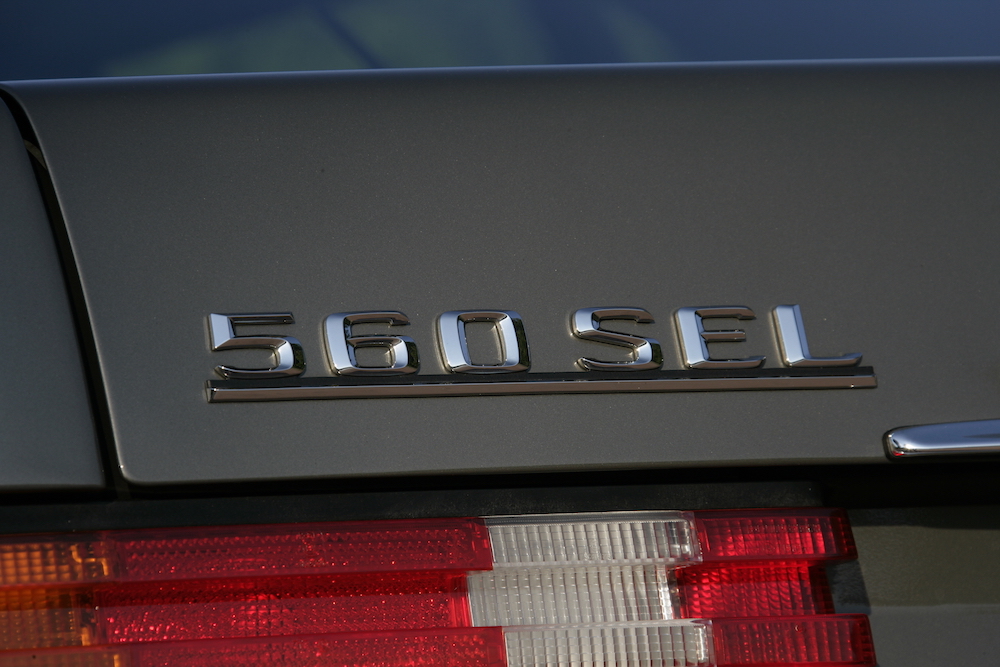 The engine runs smoothly and unobtrusively in urban traffic, and wakes up with a characterful snarl when the loud pedal is prodded. The sound is not that of a churlish American pushrod V8, it is a distinctly Germanic, „technical” V8 sound, but alluring all the same. I enjoy the autobahn drive thoroughly, even though traffic bottlenecks at construction sites slow me down. When I leave the autobahn and start following curvy Landstrassen towards the Schwarzwald area, I begin to get into the groove with the W126. 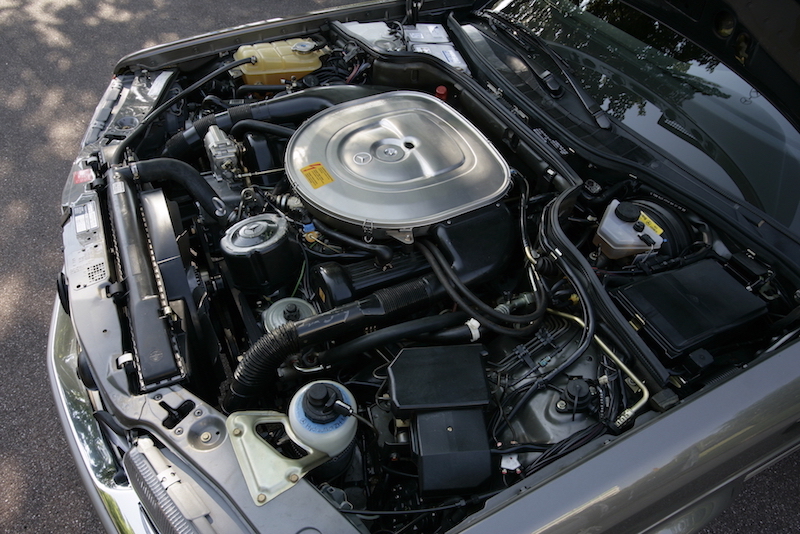 The W126 has exquisite body control, meaty weighting to all controls, the gas and brake pedals just feel right. I can brake perfectly with my left foot, which I always do on automatic cars, but which in some vehicles is so difficult that it requires the skills of an experienced contortionist. A minor gripe: the PAS pump can’t cope with very quick lock-to-lock direction changes, so you actually need upper body muscles. No problem there, as I have to stay in shape for all the work I do with classic cars, and am used to this particular form of wrestling. The V8-powered smooth-as-silk German sedan has an analog, oily smoothness to all its responses, unmatched in any later Mercedes. It reminds me that I always have valued progressiveness and linearity much higher than brutal speed or power. 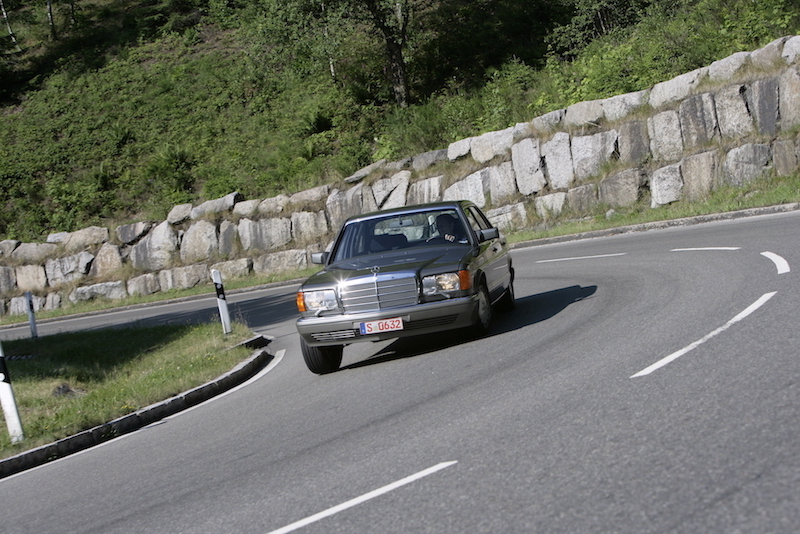 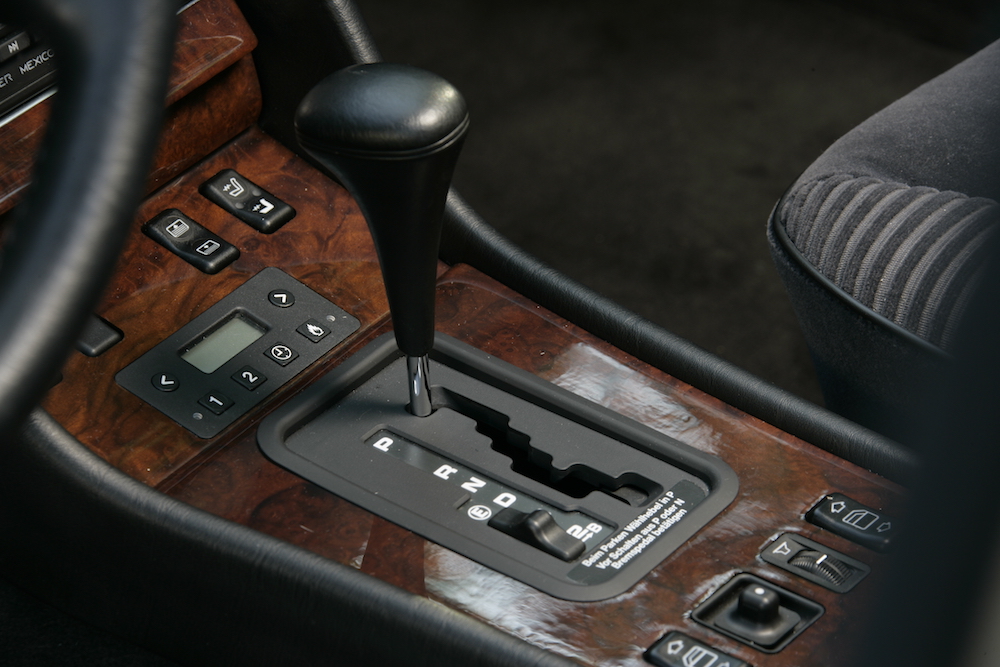 As I enter the forested hills of the Black Forest, and the dark canopy of leaves begines to filter the harsh sunlight, the world ahead of me and around me starts to look like a chiaroscuro sequence in an old film, where valuable 35 mm stock is wasted to give an impression of the protagonist embarking on a significant journey. The W126, in the long sweeping corners of Schwarzwald roads, can hardly keep up with the more modern S600 on uphill stretches. But going downhill, or in flat sections, and certainly in the twisties, I can stay on the tail of the younger car with ease. Yes, it does roll a lot in corners, but the roll is progressive and the chassis communicates precisely how much grip is left. The 560 SEL maintains perfect poise and balance while at a huge angle of roll, keeping all four wheels effortlessly on the ground. I can carry more speed through sequences of fast corners than the young Mercedes intern in the W221. Another factor is that the young man is a product of a different era: ramrod straight, with tiny spectacles and unlimited self-confidence stemming from a religious belief in German engineering. 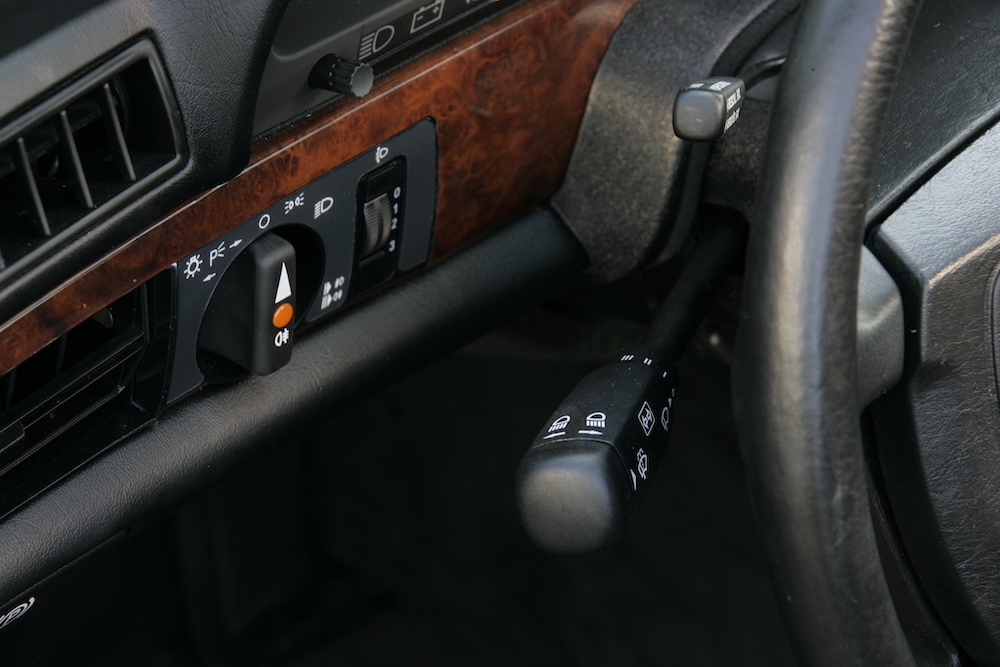 After a short break on the shore of a mosquito-infested lake, we switch the lead and my young colleague, driving the S600, relying on the skill of the ESP system to keep him out of trouble, has a hard time keeping up. In fact, in very twisty sections I, with the older car’s superior communication skills, can build up a comfortable lead. The same happens in a faster section through the forest where I hit an indicated 180 kph. With supreme confidence and a smile on my face. I push a little more through the next section and the new car completely disappears from my rearview mirror. Later the young German can't understand why the newer car could not keep up despite its superior power and technology. "The car could," I tell him. "You couldn't". My photographer later tells him not to try to race me again, because he would crash. I just love the W126 with its Koppelachse and its huge suspension travel. I can drive one all day in the gray area beyond the grip limit and always feel in complete control. 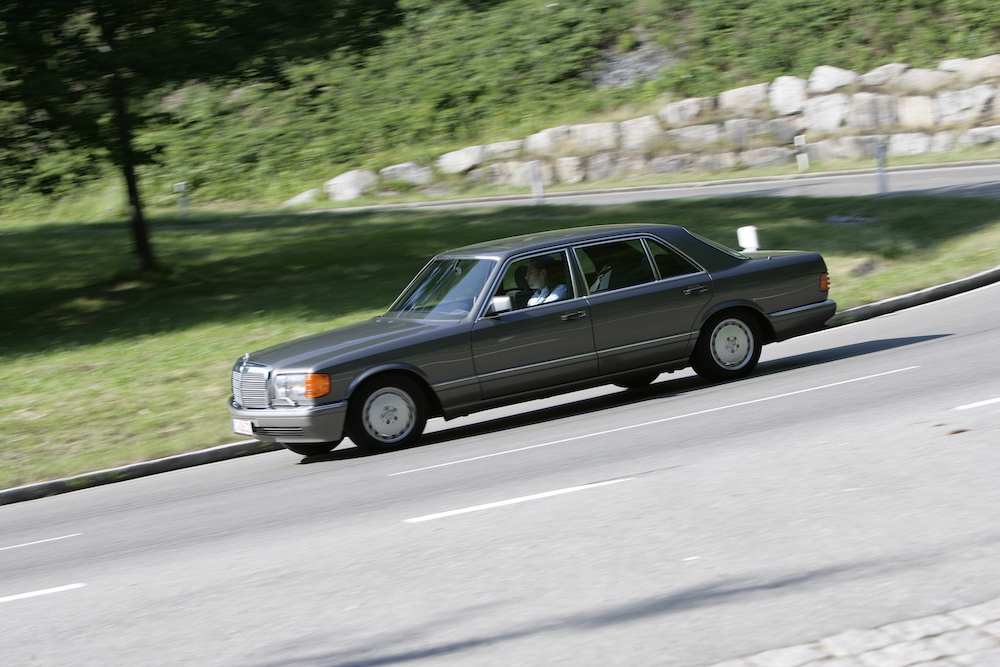 In the 560 SEL, with its rudimentary ASR traction control system, you easily estimate the grip available and act accordingly. The old-style recirculating-ball steering is no hindrance, one gets used to its slackness around the straight ahead and in the long sweeping bends of the derestricted Autobahnen it inspires confidence. One can cough or sneeze at three-figure speeds and still stay between the white lines. So much for the old MB belief that rack and pinion steering is too dangerous at Autobahn speeds: it was used for the first time on the W210. In fact I have never had problems driving the older cars with absolute precision: perhaps I am simply old enough? 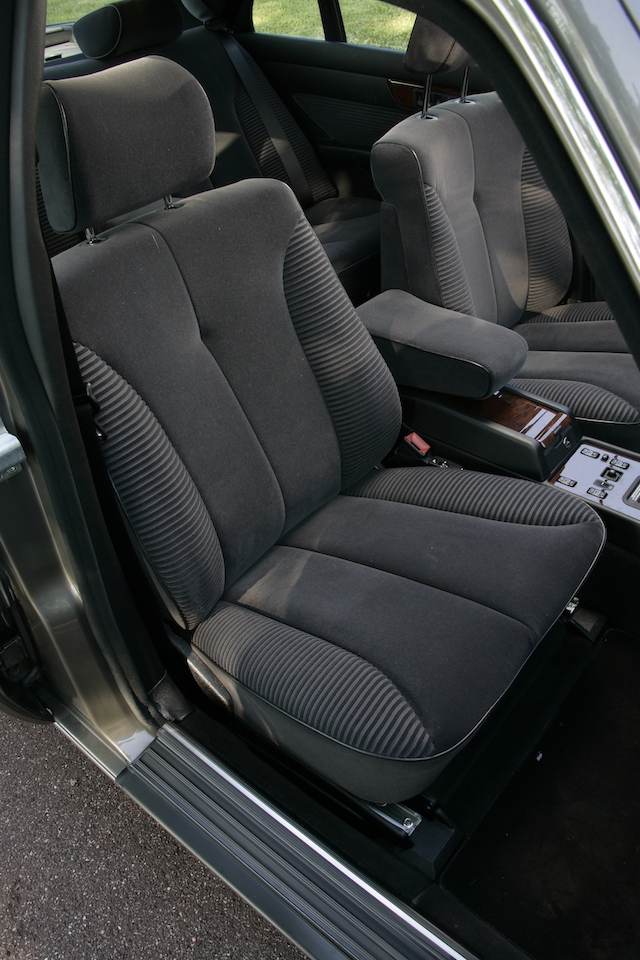 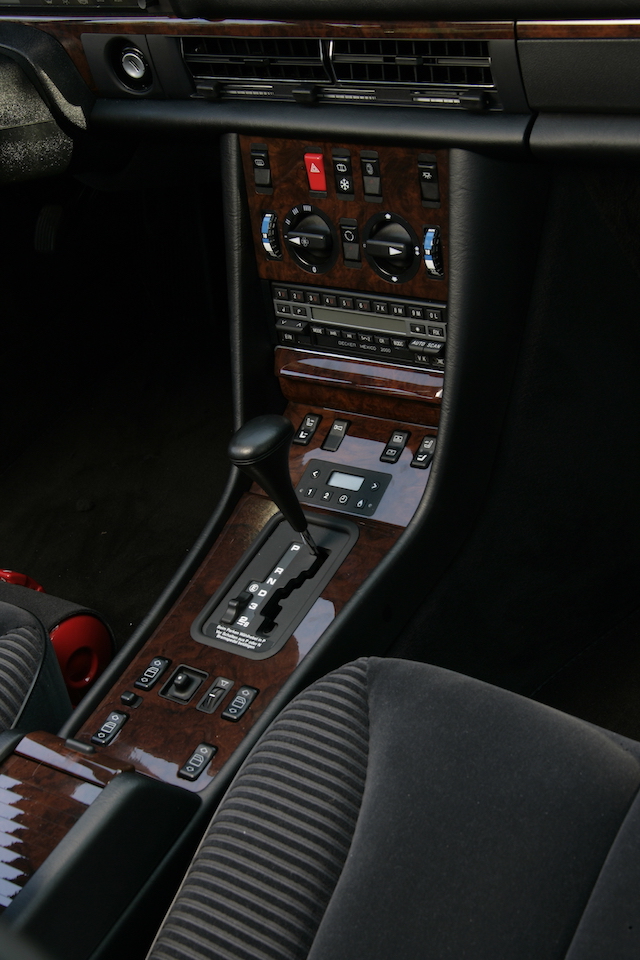 The 560 SEL has one more thing in abundance: what older Germans used to call "Überholprestige", overtaking prestige, the effect a car has on other Autobahn users when it suddenly fills their rearview mirrors. Even today, when ultrabright Xenon lights rule and impatient young people tailgate others on the highway, this is the daddy of them all. The exquisitely sprung seats and intuitive controls make long journeys shorter, and to me, the W126 is the pinnacle of Mercedes overengineering. I need to finally buy a good one... 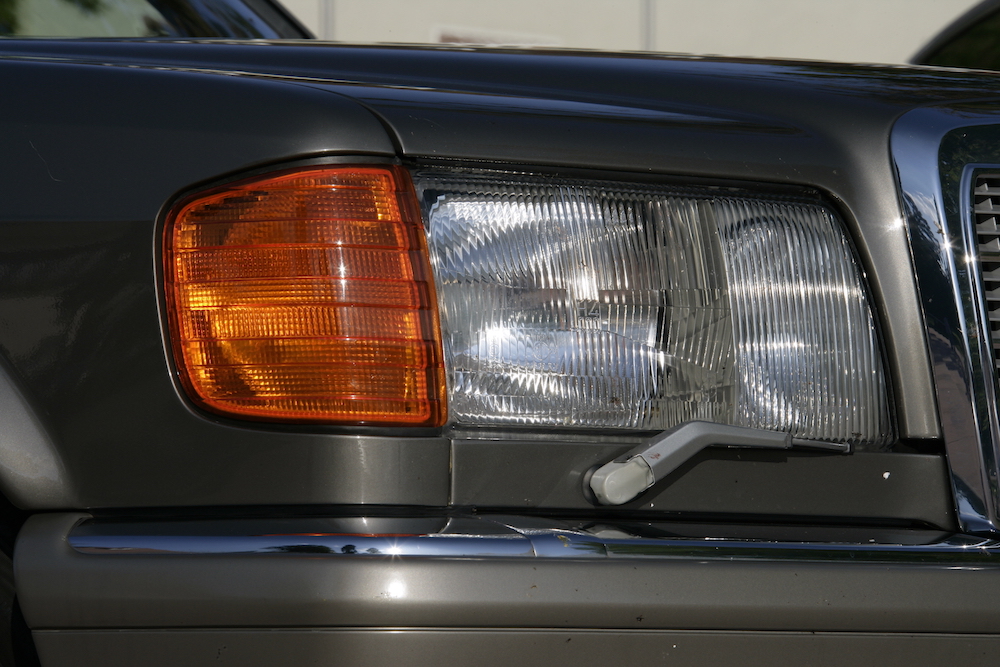