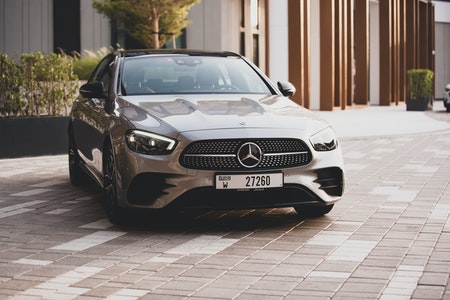 The Mercedes E -Class, at one time it was the entry-level Mercedes. At one point, it was the most desirable Mercedes as well. Some versions have even attained cult status, such as the W124 500E. Today the 124 has become the most collectable E-Class. Almost every country has a 124 collectors group. But it is time to talk about the current generation of the E-Class. The W213.

The E sits in a very clear space known as the executive segment. Whenever a person buys an E-Class, they are usually are a successful middle-aged business person or a mid-senior executive at an MNC. Making that person typically fall under the age group of 35 years plus.

At that age, one is usually in a steady relationship or married with kids. At this point, one of the cars becomes the daily driver and has to fulfil the following requirements: being comfortable, having enough space for the family, good interiors, decent performance, and enough tech not to feel pedestrian and brand pedigree, which is quite essential. So let us see if the new E-Class fulfils those needs. Watch the video as well for an in-depth experience.

This being a facelift is not an entirely new car. It has a new front end and a new rear end. With the way Mercedes is now designing cars, it becomes almost impossible to tell the difference between the smaller C-Class and the bigger S-Class. When you look at the E-Class from the side, you can be forgiven to think it looks like a C-Class. While the cars get bigger, the Mercedes design language makes them look smaller than they actually are from the outside.

The changes are mainly to the headlights, front grille and taillights. Even though the headlight unit is one unit, the lights inside are split up to give the desired look. The headlights get that split headlight looks that have become synonymous with the E-Class.

The test car I had came with the optional AMG style rims. These rims remind me of aero efficient rim designs now seen on EV cars.

All in all, the look is very Mercedes, and the car cannot be mistaken for anything else on the road.

Do not be fooled by the 300 badges. There is no six-cylinder engine underneath that bulging power bonnet. A turbocharged four-cylinder 2.0 ltr engine powers the E300. This engine produces 252 HP, and it is mated to a 9-speed gearbox. It does 0-100 kph in 6.25 seconds.

The performance is not something you write home about, but it is quick enough. It drives like a cloud at highway speeds. Manages all sorts of bumps, potholes and cambers with ease.

Low-speed driving is also pretty easy. Turn the knob to sport mode, and you would be surprised how easy it changes characteristics. The car becomes a bit more sporty, more responsive than normal. I like that.

The superb looking AMG steering weighs up nicely and gives you enough feedback. It holds true in any given situation. A decently enjoyable driving experience this car gives you. Handling also is pretty good for a car designed with cruising in mind.

The car I tested was an all options ticked car. It had the AMG body kit, rims etc. On the interior, it has the new AMG steering wheel. This wheel looks phenomenal—one of the best looking modern steering wheels out there. But the BlackBerry sourced trackpad buttons for the steering do absolutely for the experience. It is never accurate and always fidgety. It is something Mercedes needs to sort out for the next generation.

The build quality is topnotch as you would expect and can be specced to your desires and needs. The E-Class is also quite tech-heavy with the new MBUX infotainment system with the 'Hey Mercedes' audio command available, which usually chimes up every time you use the word, 'Mercedes'. My love-hate relationship with the MBUX still remains at times, it works brilliantly, and it is overly complicated at times. You will perceive it based on your personality; you will either hate it or love it.

The test car I had came with multiple bells and whistles such as panoramic roof, HUD, Sennheiser audio system, AMG body it, complete leather interiors etc. It is a good place to be in. The augmented reality navigation deserves a special mention. It is absolutely brilliant.

It is fast enough for your daily driving requirements. Comfortable enough for four adults. Safe enough to carry your family. Priced at $88,000 is the gold standard for an executive saloon car. Coincidently when we tested this car, it was the 30th anniversary of what is the father of the performance saloon car category, the 500E. We even tested the 500E. Here is the video link to the review of one of the most collectable cars on earth.

Thank you to the Canopy by Hilton Al Seef for letting us photograph and film the E-Class at their beautiful property. This hotel is situated in the heart of the historical district of Dubai and overlooks the famous Dubai Creek. A modern structure situated in the old world charm of historical Dubai. There are a ton of restaurants, cafes and shops in the nearby Al Seef promenade.